Academy Award-winning filmmakers Dan Lindsay and T.J. Martin’s documentary LA 92 (2017) immerses viewers in the events leading up to the Los Angeles riots in the spring of 1992 – from the rising tension between Korean and black communities in South Central to the Rodney King trials. Created purely from archival footage, the film looks at the notorious period of civil unrest from a variety of perspectives.

Following the documentary’s premiere at the Tribeca Film Festival 2017, ScreenPrism spoke with the co-directors behind LA 92. We discussed their resourceful research process, their cinéma vérité approach to the subject matter, how their working relationship has evolved, and much more. LA 92 debuted on the National Geographic Channel during the weekend of the L.A. riots’ 25th anniversary.

ScreenPrism: Aside from the 25th anniversary of the L.A. riots, what drew you to this subject matter?

T.J. Martin: We saw an opportunity to [create] a unique dialogue about race, class, and justice. In addition to inherently being interested in the subject matter, we thought – what if we told [this story] only through archive, and we didn’t have the filter of the news media deconstructing these events, or an expert giving you an analysis? From a filmmaking standpoint, we wanted to provide an immersive experience. From a more personal standpoint, I’m mixed-race, and [mixed-race people] experience a constant search for their place in society – especially in the United States. Dan and I wanted to look at ourselves as a society through different points of view: through the lenses of Korean Americans, the African American community in South Central, and even through the government, the LAPD, and so on.

Dan Lindsay: One thing I would add is that beyond the Rodney King videotape being the first “caught on camera” moment of police brutality that was widely disseminated in the news media, it was also a story that dealt with and explored the idea of the American experiment and all of its contradictions and facades.

ScreenPrism: I found it effective how you showed the evolution of certain officers’ racist language through police radio transmissions. How did you access those transmissions? Did you listen to a lot of police radio while you were conducting research?

Dan Lindsay: The most provocative radio from the Watts unrest, we found via YouTube. It was from a radio enthusiast who happened to have this archive of police radio that was caught during the Watts rebellion. The LAPD [transmissions] from both the Rodney King incident and the civil unrest were difficult to find. I’ll just put it this way: the Los Angeles Police Department was not helpful in our attempts to access [the archived radio]. We had to do a little detective work and find places where it existed. We listened to a lot if it, and the majority was banal police chatter. But in and around the events you see in the film, when [officers’] emotions were heightened perhaps, things that were not protocol slipped through.

ScreenPrism: Can you talk a bit about your decision to use only raw footage? I was impressed by your ability to craft a riveting narrative without the presence of a narrator.

T.J. Martin: Our background is mostly in vérité style documentary. We’re really drawn to doing work where the experience for the audience is watching a story unfold right before their eyes – not someone telling a story in retrospect. We [wanted to] bring the events to life and reengage with them [using an] emotional guidepost instead of taking an approach where we deconstruct events and pinpoint blame. A lot of people, for example, say that the reason the unrest got so bad specifically in South Central was due to the Soon Ja Du case with the murder of Latasha Harlins. This is probably true, but [our approach] was more about exploring themes than the specificities of the events. That way, you alleviate the notion of an expert telling you the X, Y, and Z of why this happened.

These events [provided] an opportunity to hold a mirror up to society. The experience you have watching the ‘65 prologue and the ‘92 unrest is much more of an emotional and intellectual wrestling with the question “What is America?” than thinking, “Now I have a comprehensive understanding of the unrest in 92.”

ScreenPrism: Where did you source your footage from? What was your research and editing process like?

Dan Lindsay: We reached out to traditional broadcast networks; we were able to access a lot of video from the Los Angeles Police Department that was stored in the archives and sort of forgotten to time. We also did a fair bit of detective work. Maybe we’d watch something on YouTube – a film that didn’t get widely seen that was made in say 1994. We’d look at the credits, see a cameraman, Google that person’s name, try to find a Facebook page, send an email. One out of 20 people would respond, and out of those, one out of 10 or 20 actually had their tapes.

We had a small, very dedicated group of researchers who made it their mission to find us everything they could. We’d get creative and think about where footage might be that you normally wouldn’t think about. One example was a video artist who had made a film piece about 1992 using a lot of satellite feeds. He captured some of the unrest as a part of a much larger art project he was doing. 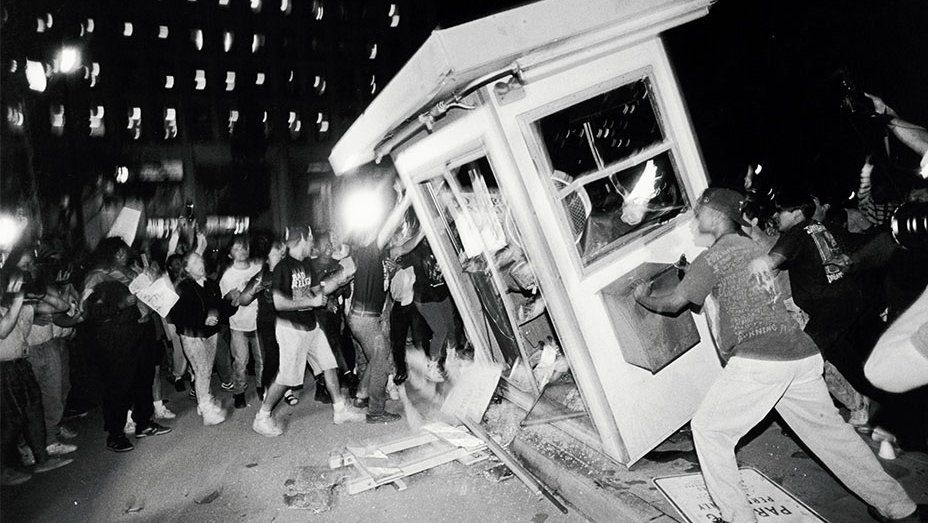 ScreenPrism: Did you learn anything that really shocked you while you were researching for the film?

T.J. Martin: You do a deep dive in terms of research and it’s like Pandora’s box: more and more doors keep opening. I think what stuck with me most was the full narrative of the Korean American experience. [At first], I wasn’t fully cognizant of why there was such a tense relationship between Korean merchants and businesses in South Central. Going through the Soon Ja Du case, [we learned more about how the Korean community] was targeted as a result during the unrest. Coming out of that experience – feeling abandoned by the LAPD and the government – opened their eyes quite a bit. I just think it’s remarkable that they marched 100,000 deep on day four on behalf of themselves, police misconduct, and civil injustice. The collective journey was powerful.

ScreenPrism: It seems that the Rodney King beating likely wouldn’t have been publicized if George Holliday hadn’t left his home and caught it on camera. How do you think technology has affected police accountability and officer-community relations?

T.J. Martin: There’s a moment in the film – which is echoed a couple times throughout – where a representative from the ACLU says something to the effect of: “We get 500 calls of police misconduct a week, but the difference this time is that we have the proof.” Given the proliferation of atrocities from [figures of] authority that are captured pretty consistently these days, I don’t really see that changing the outcome on a judicial level. We’re kind of seeing the recycling of a similar system; not even just the physicality of the violence, but the system itself.

Dan Lindsay: Like T.J., I’m hesitant to comment on this. But as an observer of society, I personally find it troubling that when really disturbing moments of human brutality are caught on camera, I can almost predict what people’s reactions will be going to be based on their political leanings. The fact that this has become politicized is extremely disturbing to me. If you go back and watch videos of reactions to the Rodney King tape, that was not the case then. In that way, I would say we’ve regressed as a society and it’s sad to me that that’s the case. 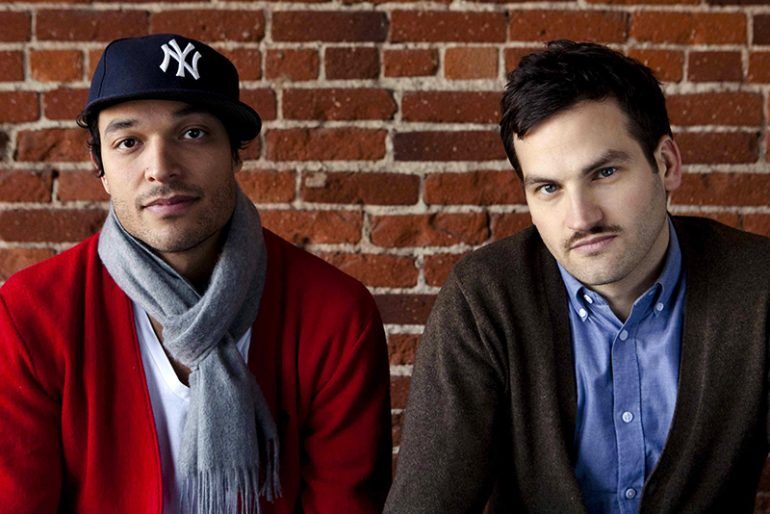 ScreenPrism: You two have collaborated on a few different documentary projects including the Academy Award-winning Undefeated (2011). Congratulations on that. How has your working relationship evolved and what have you learned from each other?

T.J. Martin: Neither of us went to film school and we both had similar trajectories where we were kind of self-taught filmmakers. We came into it during the digital revolution, picked up a camera, and taught ourselves how to shoot and cut. Every project [we’ve worked on] has honestly been some sort of film school. What I’ve learned is [to maintain] a continued sense of critical thought and not to settle, but to strive to do something great.

You find a lot of teams that get competitive. We’re not competitive; we inspire each other to work harder. What I’m most excited about is that there’s been a greater sense of trust gained, in terms of seeing [my] creative partner grow and appreciating his creative and critical sensibilities.

Dan Lindsay: Beyond work, I just feel very fortunate to have T.J. in my life. I feel that I’ve become a better person because of our relationship, and that I appreciate things about the world in a way I didn’t before. We pretty much work on everything together. Maybe it’s semantics, but to us, there’s a difference between a directing partnership and a creative partnership. We’re really fluid in the ways that we work on things: who sometimes takes the lead and who doesn’t. We’ve been working together for 10 years now. It’s incredible for me to watch our growth together but also to watch T.J.’s growth as an artist. I’ve seen him take on new endeavors and master them. It inspires me to want to go and do the same.