German artist and filmmaker Julian Rosefeldt’s Manifesto (2017) – which debuted as a multi-screen film installation at the Australian Centre for the Moving Image in 2015 ­– explores a variety of manifestos hailing from prominent thinkers and movements of the 20th century. In the film, Cate Blanchett plays 13 different characters that theatrically recite selections from the texts in unexpected forums. Dada at a funeral; Dogme 95 in a pre-school classroom; Bruno Taut at a trash compacting factory – Rosefeldt was interested in recontextualizing these works in contemporary settings.

The film version of Manifesto screened at the Tribeca Film Festival 2017, where The Take interviewed director Julian Rosefeldt. We discussed the root of his infatuation with manifestos, the function of architecture in his work, the power of atmospheric images onscreen, and more.

The Take: How did you go about choosing manifestos to feature in the installation & film?

Julian Rosefeldt: The idea came to me during research for another project that I was doing a few years ago. I was reading feminist theory and I came across two manifestos from a French futurist, a [female] artist called Valentine de Saint-Point. I remembered reading those and other milestone [works] like the first famous artist manifesto, which was published on page one of Le Figaro newspaper. I [became obsessed] with manifestos and I read more and more: political manifestos, architecture manifestos, film manifestos, and so on.

When [Cate Blanchett] and I met two years prior to this, we knew we wanted to do something together. I had an idea right from the beginning that she would play many different characters. So that triggered the idea to create an analogy to these manifestos with different sceneries and [archetypal] characters. I was imagining friends talking to each other and not agreeing on everything – having controversial ideas, but sympathizing with each other. There’s a lot of positive energy in the piece. 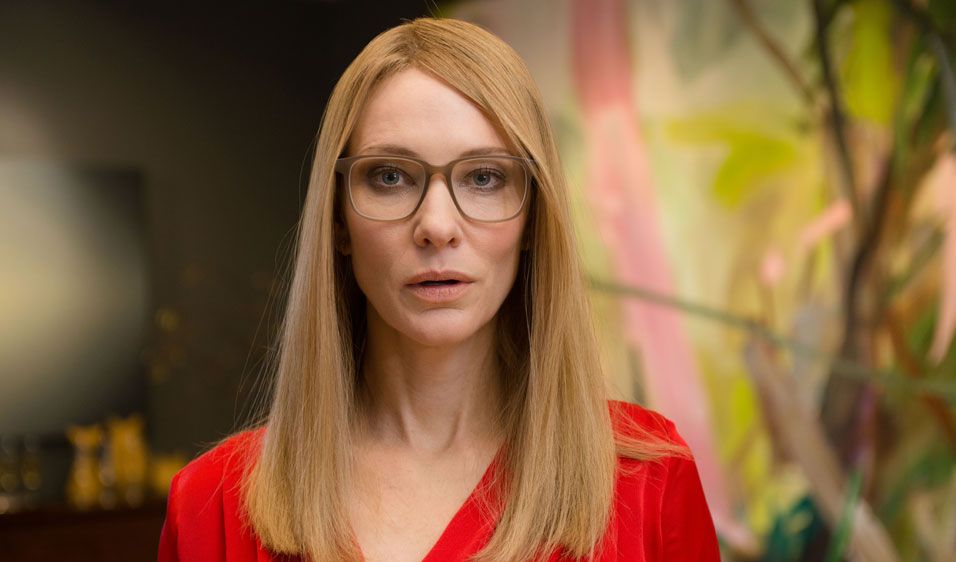 Cate Blanchett in “Manifesto” (2017)
TT: How did you choose which scenes and archetypes to pair with each manifesto?

JR: Basically, [I was interested in] freeing all of these texts from their original contexts and making them accessible again. My first thought was: what are these texts? They have always been read as art history, but the artists often wrote them before they even created the work they were famous for. When you understand that the texts came first and read them with this attitude – forget about the visual work – they become different texts. [The manifestos] were written when the artists were very young. They seem so loud and angry, but they are insecure and fragile at the same time.

[Some of] the ideas for different sceneries came out of the text material itself. The best example I think is the futurism [manifesto] with the stock exchange scenery. The futurists had this fascination with technology and speed, and they ended up sympathizing with Fascism. I thought it would be very interesting to find a similar field of work and analysis where you have two things: the fascination and the almost drug addict-like [craving] for speed.

TT: I found the Dada monologue at the funeral especially striking. I think that might be because I’m culturally conditioned to feel uncomfortable with anything outside of the norm at funerals.

JR: When [Cate Blanchett] insults the audience, it’s so great. For that specific scene, the nucleus of the idea was in one of the texts, which has a very morbid atmosphere. Because Dada is so funny, when you read it with this kind of longing for death and darkness, it becomes a totally different world. At the same time, that probably has to do with Cate’s incredible talent.

TT: Why did you decide to have Cate Blanchett play all of the different characters?

I think the fact that Cate plays all of the characters [makes the audience] get more into it. You make your way through the 20th century, following different streams of art and movements, and you stay with one face. I think that’s a far more interesting project than doing it with 13 different actors. And then there’s the feminist twist. These texts are very testosterone-driven. The 20th century was very male-dominated, and I thought it would be interesting to hand [these texts] over to a woman and see what happened to them. And to the testosterone. 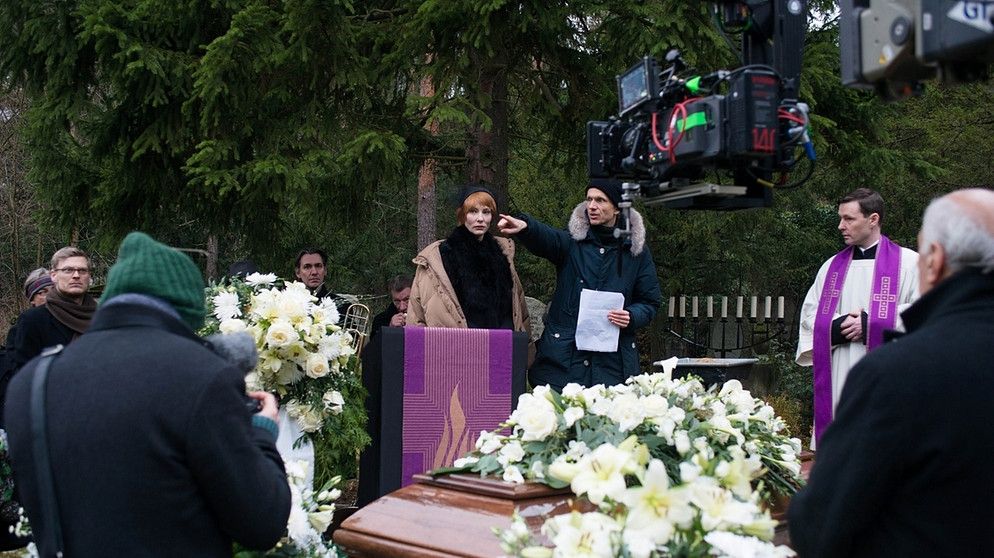 Cate Blanchett and Julian Rosefeldt on the set of “Manifesto”

TT: I read that you have a background in architecture. How do you think that has affected your work as a video artist and as a filmmaker?

JR: [Architecture is] not only a motive that I like to use in my films, but it also [impacts] the way I install my work. In this specific project, architecture has a very prominent role. I would say it’s the second protagonist in the film next to Cate. The architecture here is fascinating because it’s not so easy to understand what each and everything [you see] is – and that’s by intention. I like to use architecture not as illustrative, but as something that sharpens your senses… I don’t know how you felt in relation to the work, but it’s quite trippy. What was your experience like watching the film?

TT: The combination of Cate’s monologues with the grandiose architecture was almost hypnotic. I was thinking “what is going on?” during the stock floor scene, when you zoomed out and everything was not what I thought it was. It was like experiencing continual re-contextualization.

JR: A shock to your senses. That’s the function of architecture in this specific work. I also work a lot on the deconstruction of movie-making in my projects, so scenography and sets play an important role as instruments to research for filmmaking.

TT: Can you talk a bit about your filming locations? I know you filmed in Berlin.

JR: Yes, everything [was shot] in and surrounding Berlin. But it was not easy for even Berliners to understand that this was Berlin apart from one or two locations, which most people know. We tried to avoid the typical and romantic Berlin locations and rather went researching for weird, scientific places or [locations where we] changed something. [For example], the stock exchange place was actually the reading room of a library, which we digitally [altered]. I also had a location scout, but I mainly needed him for the three interiors: [the settings for] the single mother, the family lunch, and the villa by the sea.

If you follow the concept that the architecture doesn’t have to illustrate what’s happening, you’re so free. We aren’t necessarily trying to find a sensible combination of text and location. Filmmaking is a lot about experimenting and trying to find out what’s possible.

TT: I was overwhelmed by a lot of the architecture, but I thought it was funny when Cate said “hurray for everlasting architecture!” against the visual of a trash compacting factory.

JR: Very often, utopias end in delusions. That place is a place that we avoid to see. But right now we are creating garbage, and it will end up in one of these plants. We have fantastic ideas, but we are producing a lot of rubbish. I like that moment too.

TT: I know you’ve worked with the cinematographer Christoph Krauss on quite a few projects. What is your dynamic like?

JR: Christoph and I do most of my work together. We get along very well and from the beginning, we elaborated a visual language. I often pay attention to details that are maybe boring, but because they are so unseen on the screen, they are hypnotic. A character is just sitting at home; nothing special. But if you watch this guy, it can be like watching a fireplace. It doesn’t tell a story, but it tells you something else. Christoph understood from the beginning that this could be very interesting. And he is a master of lighting. We know each other so well that we don’t need to talk much about aesthetics at all.

TT: Would you consider the film an adaptation of the original installation or just the same work in a different format?

JR: I think it’s a different work. The audience always completes the work. [Often], art audiences are ready to be surprised by whatever. If you have 13 screens around you and you decide how long you want to stay where, you are kind of becoming part of the society of characters. And that moment at the end of the film when you see this mosaic of the 13 characters speaking at one pitch – that is happening in the installation every 10 and a half minutes. It’s this strong, embracing moment when all of the artists speak with one voice, one harmony. That’s the voice of art.

The film audience, [on the other hand], is used to stories – to being taken by the hand and guided through. That doesn’t happen here. That’s why I’m happy that now the film is mostly shown in the narrative context of film festivals. Sundance first wanted to put it in the art section and I was against it because that’s what I already do in my museum exhibitions. I thought it was much more interesting to plant this disturbing thing in the normal narrative sections.

TT: Where was the spiral staircase that was featured in the film?

JR: That was the only building that was not in Berlin. That was in Cottbus, it’s about a two-hour drive away from Berlin. It’s a Herzog & De Meuron building – a library.

TT: Who are your influences as an artist and filmmaker?

JR: I grew up in Munich and we had a great film museum with a director who was responsible for the restoration of Metropolis (1927). He was doing great retrospectives for filmmakers where I encountered, for instance, Michelangelo Antonioni, who was certainly influential. In each and every project of mine, there are hidden love declarations. [In Manifesto, I reference] Antonioni with the three old ladies firing rockets in the sky. In the film La Notte (1961), there are three teenagers firing rockets in the sky in the suburbs of Rome. I just thought, how old would they be now? And I wondered if they were still doing that.

Then there’s Kubrick. The monolith in my film is the floating black object. I also did a film ­[Deep Gold (2014)] – the one that I mentioned which triggered the idea for Manifesto – that’s an homage to Luis Bunuel’s film The Golden Age (1930). Among the visual artists, I like Stan Douglas a lot for his work.

TT: I thought of Terence Malick while watching your film. It provided a similar viewing experience that was more about the feeling that you get while watching something as opposed to the story.

JR: I certainly admire him; his cinematography is so beautiful. He risks a lot believing in the atmosphere of the images. And Paul Thomas Anderson, of course, has moments in his stories that I totally sympathize with. Like In Punch-Drunk Love (2002), there’s this one moment in the beginning where a truck accident happens arbitrarily in the background. It doesn’t mean anything to the story that’s actually being told, but it’s just there. It triggers this energy because it doesn’t belong there.

TT: What advice would you give to aspiring video artists and young filmmakers?

JR: Take risks and don’t get spoiled by all of these so-called rules of filmmaking. There are no rules at all. Be faithful to yourself, be creative, and trust your inner curiosity.