Why is “Bride of Frankenstein” often analyzed as a gay parable?

Film historians have long studied the films of James Whale for their homosexual subtext. Whale was one of the few openly-gay directors in a time where such admittance was socially and occupationally risky. While some critics have theorized Whale’s films reveal gay subtext simply because biographers try to find it, there are themes within his pictures that allow for his films, particularly Bride of Frankenstein (1935), to be interpreted and dubbed a gay parable created under the new and powerful force of the Hays code moderating Hollywood film content.

As Sequart explains, “Bride of Frankenstein is a perfectly suitable example for a discussion on the applicability of [homosexual] concepts as it has a homosexual director, a presumed homosexual reading, and the much-discussed question if this interpretation was intended by the director… Most film critics and Whale’s contemporaries focus on the author-centred intentional gay reading to either dismiss a homosexual interpretation as a revisionist view of the film that wants a movie shot in 1935 to transmit modern values, or they clearly state that it was impossible for such a sophisticated director as James Whale not to be aware of all the film’s evidence of a gay sensibility.”

Frankenstein as a book has long been viewed as feminist literature, having been written by a woman in the early 19th century. In his book The Monster Show: A Cultural History of Horror, author James Skal writes that with Bride of Frankenstein, James Whale “instinctively dipped into the feminist subtext of Frankenstein for his sequel, decades before any formal feminist inquiry.”

“The old horror films do have a certain resonance for gay people,” says author and film historian David Skal, whose The Monster Show is considered the classic study of the genre. “Monster movies are about sexual repression, among other things. And homosexuality is one form of sexuality that has traditionally been repressed.” 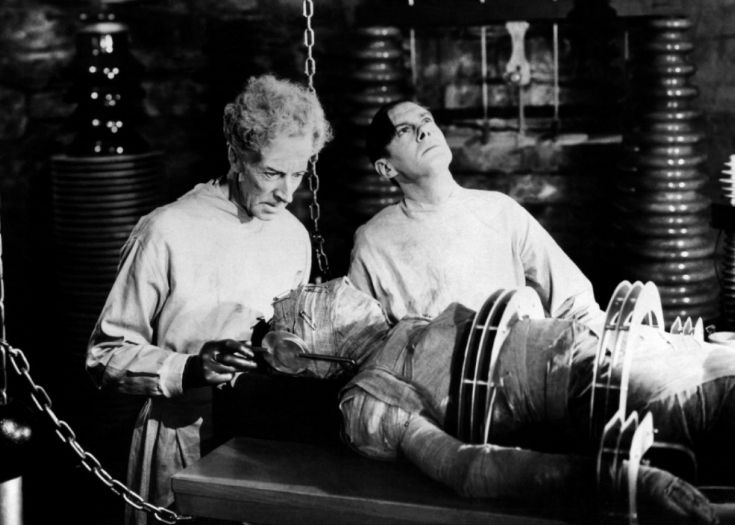 Author Christopher Bram noted the centerpiece of Bride of Frankenstein’s supposed queerness is Dr. Septimus Pretorius, archly played by the effete English actor, Ernest Thesiger, a personal friend of Whale’s. “Whale had a lot to do with the writing of the final script,” Bram says. “It’s clear he saw Pretorius as an old queen in love with Dr. Frankenstein (Colin Clive). When Frankenstein’s wife walks in, his nostrils dilate and he turns away.”

It’s true that Pretorius does interrupt the evening of Frankenstein’s wedding with the request they partner up in an attempt to create life, disabling Henry’s chance of consummating with his bride. Elizabeth (Velerie Hobson) is left by herself while the two men go off to “use his creativity” and become the same-sex parents of a monster; Henry Frankenstein the bringer of life, and Pretorius the nurturer. Though Frankenstein is reluctant to admit it, the thought of creating life with Pretorius and thereby stifling the female necessity inherent in the process inspires him. Whale’s decision to cast two known bisexual actors in the roles only further the reading of subtext.

Skal expounds upon this component of the Frankenstein films. “There is an overriding fantasy of male-male procreation,” Skal says. In the original Frankenstein (1931), the good doctor pieces together his creation with the help of his deformed male assistant. “It is homoerotic, or at least, autoerotic,” Skal explains. “There is the persistent undercurrent of men creating life without women.”

In the first Frankenstein picture, the creator rejects the creation for being less than what he expected, a theme scholars interpret as the frequent observation by fathers of their gay sons. 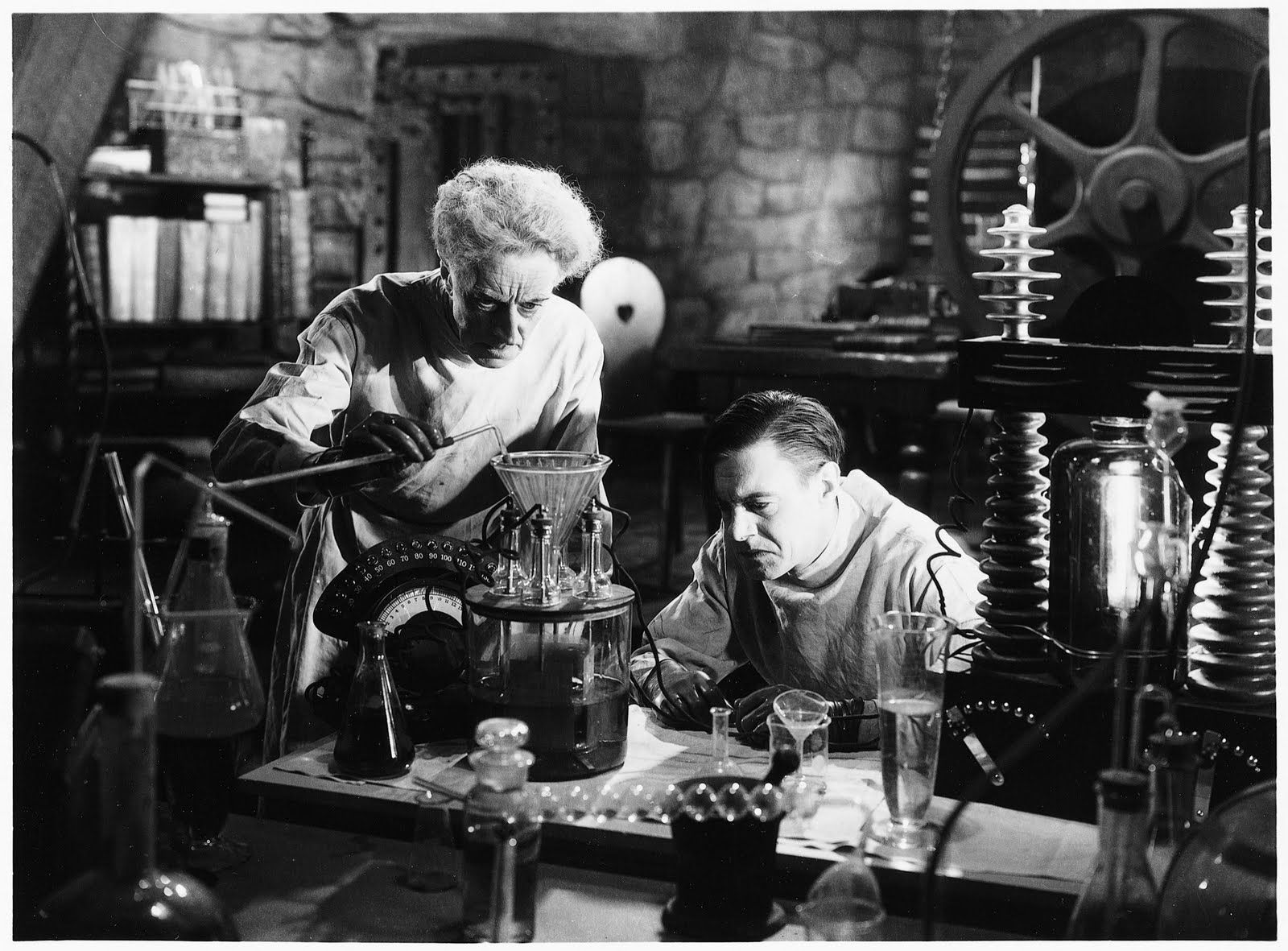 For Gary Morris, the creation of the bride becomes the crucial scene in his homosexual reading of James Whale’s Bride of Frankenstein, while for Elizabeth Young, this scene also conveys a phallic imagery, “from the long shaft that elevates the bride to the roof . . . to the men’s excited shouts of ‘It’s coming up’ as she is raised. This portentous presentation of the film’s climax glorifies Frankenstein’s and Pretorius’ work. They can be seen as a homosexual couple about to ‘give birth’ to a woman, both defying God’s role as creator of life and replacing the heterosexual way of birthing children, thus challenging religion and society. By presenting their standard sex role-defying, God-replacing creation as such an elaborate, complex scene, James Whale compares himself to Frankenstein and Pretorius. He not only glorifies their work, but also presents his own abilities as an artist, orchestrating his homosexual creativity, which lies in his film-making. Whale’s film-making is his creation of the bride; his critically praised and commercially successful Bride of Frankenstein is his monster; and he is one of Pretorius’ proclaimed ‘Gods’.”

Bride of Frankenstein’s original cut was fifteen minutes longer than the final version, as its original ending was edited down to avoid conflict with the production code due to even more obtuse anti-hetero subtext. One alteration came in the film’s ending, where it was originally implied the bride’s heart was taken from Elizabeth, Frankenstein’s other bride. This would imply that Frankenstein and Pretorius’ mutual goal was predicated on the destruction of Frankenstein’s heterosexual relationship, that he literally sacrificed Elizabeth for the realization of his other ambitions. Effectively, he would have chosen a homosexual partnership over marriage. (It’s also possible the plot point would merely serve as a sharp and terrifying twist.)

The only fruitful and emotional relationship within the film is between the Monster (Boris Karloff) and the blind hermit (O.P. Heggie), a satire against heterosexual family values. Conversely, the film’s straight relationships are all doomed. Henry Frankenstein and Elizabeth are wounded by blackmail and kidnapping, and the consequences of Henry’s reanimation practices. The monster and his bride are also a failure—as soon as the bride sees the monster, she shouts, she recoils, and she proves that much like dead tissue should not be reanimated, love cannot be manufactured. Thus, the story of the two lonely souls outcast by society is the only persevering relationship. A relationship which, it should be noted, exists harmoniously until discovered by regular society members who find it unnerving. The handicap of both characters—one a monster, one a crippled hermit—can be viewed as two representations of homosexuals in the inimical eyes of society. “I shall look after you, and you will comfort me,” the hermit says to the monster. 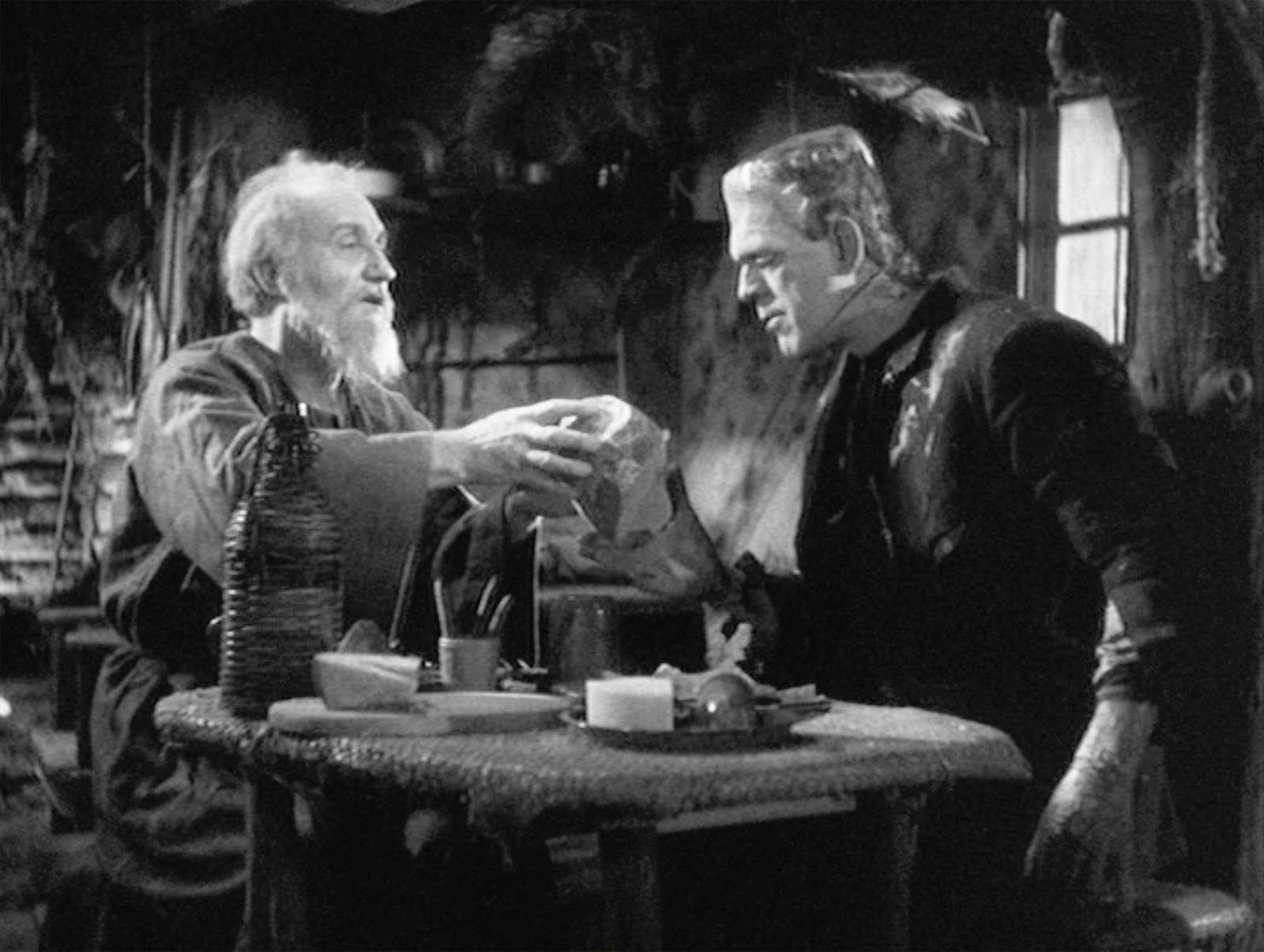 The monster itself can be viewed as an icon of homosexuality, as he is judged by society not because of what is on the inside, but because of his outward appearance. Though he becomes a sympathetic character who merely seeks affection, he is chased and persecuted as something people cannot comprehend. The monster is not normal, so he must be a threat. Only the blind hermit fails to pass judgment. This can be read as Whale challenging people to revisit their tolerance for those that appear “abnormal,” and not immediately deem them as destructive forces in society.

Sequart continues, “Dr. Pretorius, a character that was not part of Mary Shelley’s original novel, seems to have been introduced by James Whale to trigger all these homosexual interpretations. He is a character with a campy style, the one who seduces Frankenstein to the creation of the bride, and, as we are going to explore later on, a decisive factor in the character constellation presented in this film. Besides, he also acts as the voice against society and religion. In some way, he stands for a homosexual pride that in some cases converts into arrogance. He knows that society does not tolerate gay behaviour. Thus, by presenting his being different as being superior to the rest, he shows his dislike for society, and therefore for conventional love. He does not feel ashamed for the fact that society does not tolerate his life style and he does not even try to alter this situation, but dismisses their reaction as an act of low intellectuality. For David J. Skal, he is ‘a bitchy and aging homosexual’ and by seducing Frankenstein, he acts as if he were a ‘gay Mephistopheles’ (The Monster Show). When he shows Frankenstein the homunculi he has created, he goes over to a sweeping attack on authorities, heterosexual love, and religion. He comments his miniature king and queen with the words ‘even royal amours are such a nuisance’ and ‘wonder[s] if we’d all be better off being devils, and no nonsense about angels,’ thus mocking religious morals, which clearly oppose homosexuality as a valid alternative to heterosexual love, seemingly amused in his self-declared superiority.” 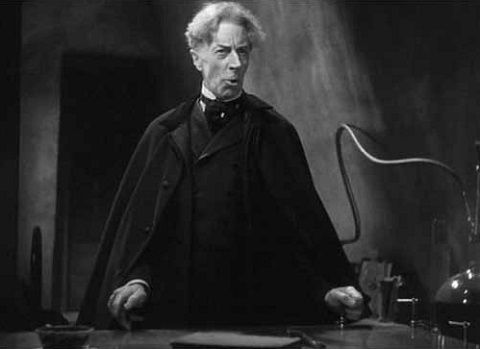 All the above is interpretive but certainly not definitive. James Whale’s biographer James Curtis sees homosexual interpretations of Whale’s work as reactionary; that these readings can be found in the material simply because people try to find them. Whale’s companion David Lewis stated flatly that Whale’s sexual orientation was “not germane” to his filmmaking. “Jimmy was first and foremost an artist, and his films represent the work of an artist—not a gay artist, but an artist.”

Filmmaker Curtis Harrington, a friend of Whale’s, agrees with Curtis and Lewis. “All artists do work that comes out of the unconscious mind and later on you can analyze it and say the symbolism may mean something, but artists don’t think that way and I would bet my life that James Whale would never have had such concepts in mind,” he said. “My opinion is that’s just pure bullshit. I think the closest you can come to a homosexual metaphor in his films is to identify that certain sort of camp humor.”

Regardless of whether or not Whale was consciously injecting homosexual subtext in Bride of Frankenstein isn’t particularly important. As Roger Ebert said in his Great Movies entry on the film, “[Gay] parable or not, the movie is more fun when its insinuations are allowed to glide beneath the surface as an unspoken subtext.”

What matters more than anything is that Bride of Frankenstein is a legendary entry in horror history. It influenced countless films that followed and combined genres in a way people had not yet seen by 1935. It is, without a doubt, a classic piece of cinema that deserves to be treasured.