One of my favorite B noir films is The Big Combo (1955). Like Gun Crazy, released by the same director five years earlier, The Big Combo offers a non-stop explosion of violence and corruption, leaving the viewer feeling more than a little soiled by exposure. The film’s characters are larger-than-life exaggerations of noir types, from sadistic mob boss Mr. Brown (Richard Conte at his pathological best) to drugged-out gun moll Susan (Jean Wallace with blonde hair so lank its speaks her exhaustion louder than any dialogue). Even our ostensible hero, police Lieutenant Leonard Diamond (Cornel Wilde) is having casual sex with street-wise burlesque girl Rita (a small role played compellingly by Helene Stanton). For those in pursuit of queerness, however, the best characters in the film by far are its pair of merciless hitmen, Lee Van Cleef’s Fante and Earl Holliman’s Mingo. 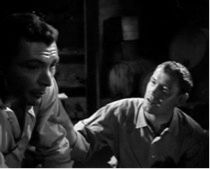 Lee Van Cleef and Earl Holliman in “The Big Combo”

The two are an inseparable duo, Mr. Brown’s most trusted henchmen, charged with tasks from keeping an eye on Susan to taking out the competition or anyone else that gets in their boss’s way. Fante is the sharper and more dominant of the pair, and Mingo follows his every order.

Proof that they’re not just cohorts but lovers comes when we see that they share a tiny hotel room with beds as close as film of the era would allow. (Even The Thin Man (1934)‘s Nick and Nora slept further apart years earlier, as would The Dick Van Dyke Show (1961-1966)‘s Rob and Laura on TV years later.) After a bare-chested Fante answers the phone, it’s a queer delight when he then leans over to tell the score to Mingo — who is sleeping just across the nightstand. I’m particularly drawn to this relationship because its intimacy reaches beyond sex. When Fante is shot and killed, Mingo’s despair is palpable. Wounded and on a stretcher, he calls out pitifully to his partner, who lies dead nearby.

One could make the argument that this portrayal is intended as just one more illustration of corruption in this bleak film. Certainly, Fante and Mingo are no poster couple for gay rights. But for viewers at the time seeking any representation of queerness within homophobic Hollywood images, there’s a clearly loving relationship to celebrate, even if it is between murderous thugs.

Note: Fans of Fante and Mingo can also celebrate their long-lasting impact, for Joss Whedon paid tribute to them his film Serenity (2005), naming a team of twin fences “Fanty” (Fantastic Rample) and “Mingo” (Mingojerry Rample). Although the bond is familial, the homage is clear.