How does “Bride of Frankenstein” cross genres to add humor and build empathy for the monster?

Universal Studios was the king of horror in its early decades, responsible for portraying everything from The Wolf Man to The Mummy, Dracula, and of course, Frankenstein’s monster. Of all Universal’s early horror successes, one title stands out as a classic film above the others—James Whale’s Bride of Frankenstein (1935). In the rare ilk of sequels better than their predecessor, Bride of Frankenstein boasted a beautiful matrimony of gothic horror, shocking imagery, touching sentiment, and unexpected humor. It is a pleasurably balanced film that crosses genres in a way so few films had yet attempted by ‘35.

Whale manages to build upon his first film and shrewdly shuffle between terror and timidity in the monster’s demeanor, demanding empathy from the viewer at the same time working to cause fright. Frankenstein’s monster enters the film’s plot immediately following the closure of the first movie. After having drowned a little girl, villagers chased the monster to a mill and burned it down, assuming they killed him. They didn’t, of course, and the monster’s first two victims in Bride are the drowned girl’s parents. Opening the film with immediate violence throws the viewer off-kilter—we never expect the depth of narrative that is to come by the film’s conclusion, and certainly don’t think we’ll walk away with empathy for the beast. He is still very much a monster at the start. Roger Ebert referred to the film as “the best of the Frankenstein movies—a sly, subversive work that smuggled shocking material past the censors by disguising it in the trappings of horror. Some movies age; others ripen. Seen today, Whale’s masterpiece is more surprising than when it was made because today’s audiences are more alert to its buried hints of homosexuality, necrophilia and sacrilege. But you don’t have to deconstruct it to enjoy it; it’s satirical, exciting, funny, and an influential masterpiece of art direction.” 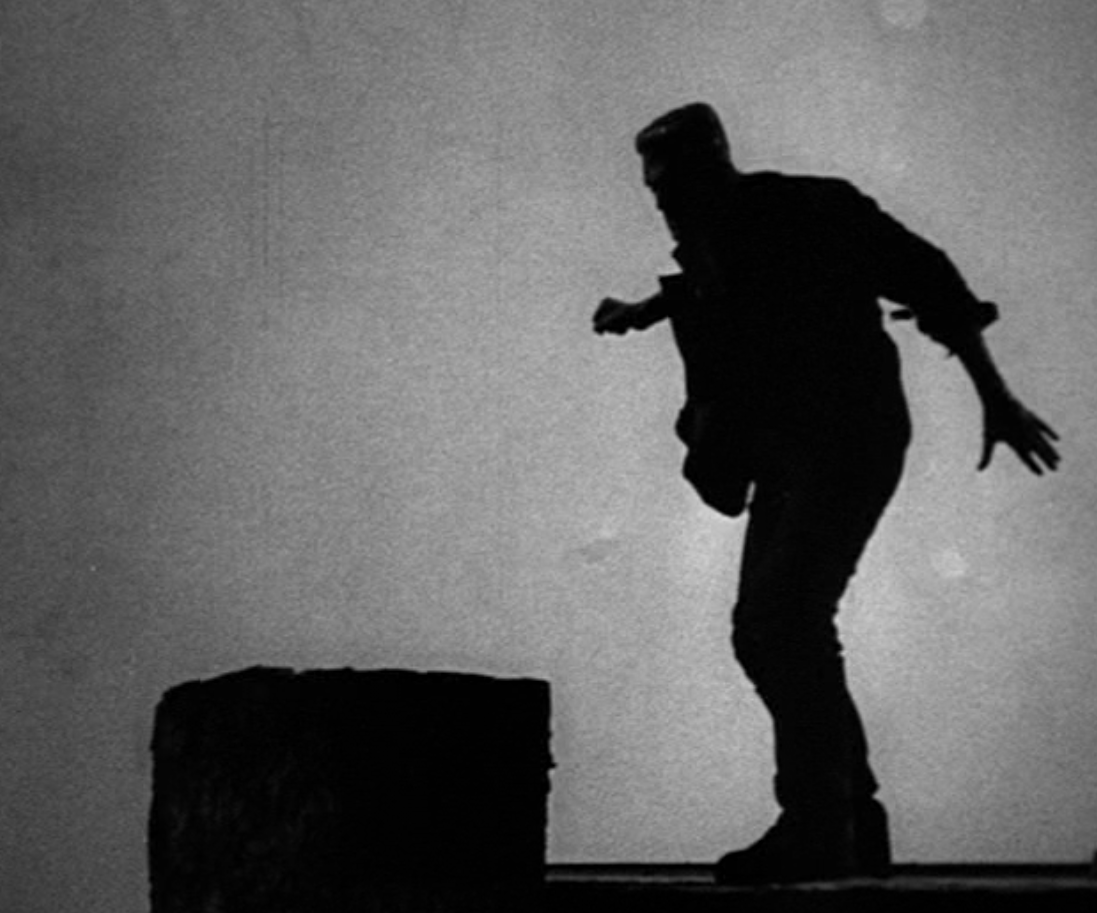 That is Whale’s ultimate stroke of genius in Bride of Frankenstein. By shifting the story to focus on the monster’s loneliness, we begin to forgive his actions as being the crazed behavior of an inhuman creation that doesn’t know any better. As we unearth his desire for a companion, the monster learns to talk, albeit in brief and staccato phrases. It is enough that we see beyond the surface of the creature: Frankenstein didn’t just create a monster, he created a person.

Dr. Frankenstein (Colin Clive), also presumed dead after the events of the first film, survived as well. Having been scarred by the experience, he vows to give up his hobby of playing god and settle down with his lady Elizabeth (Valerie Hobson). That works for a minute, until the introduction of Dr. Pretorius (Ernest Thesiger).

Pretorius is a parody of evil villains before there were evil villains to parody. He is chock full of camp and carries himself in dedicated “mad scientist” mode. He attempts to recruit Dr. Frankenstein to assist him in reanimating more corpses. Frankenstein refuses until Pretorius reminds him he’s an accessory to multiple murders, and blackmails help from the reluctant doctor. 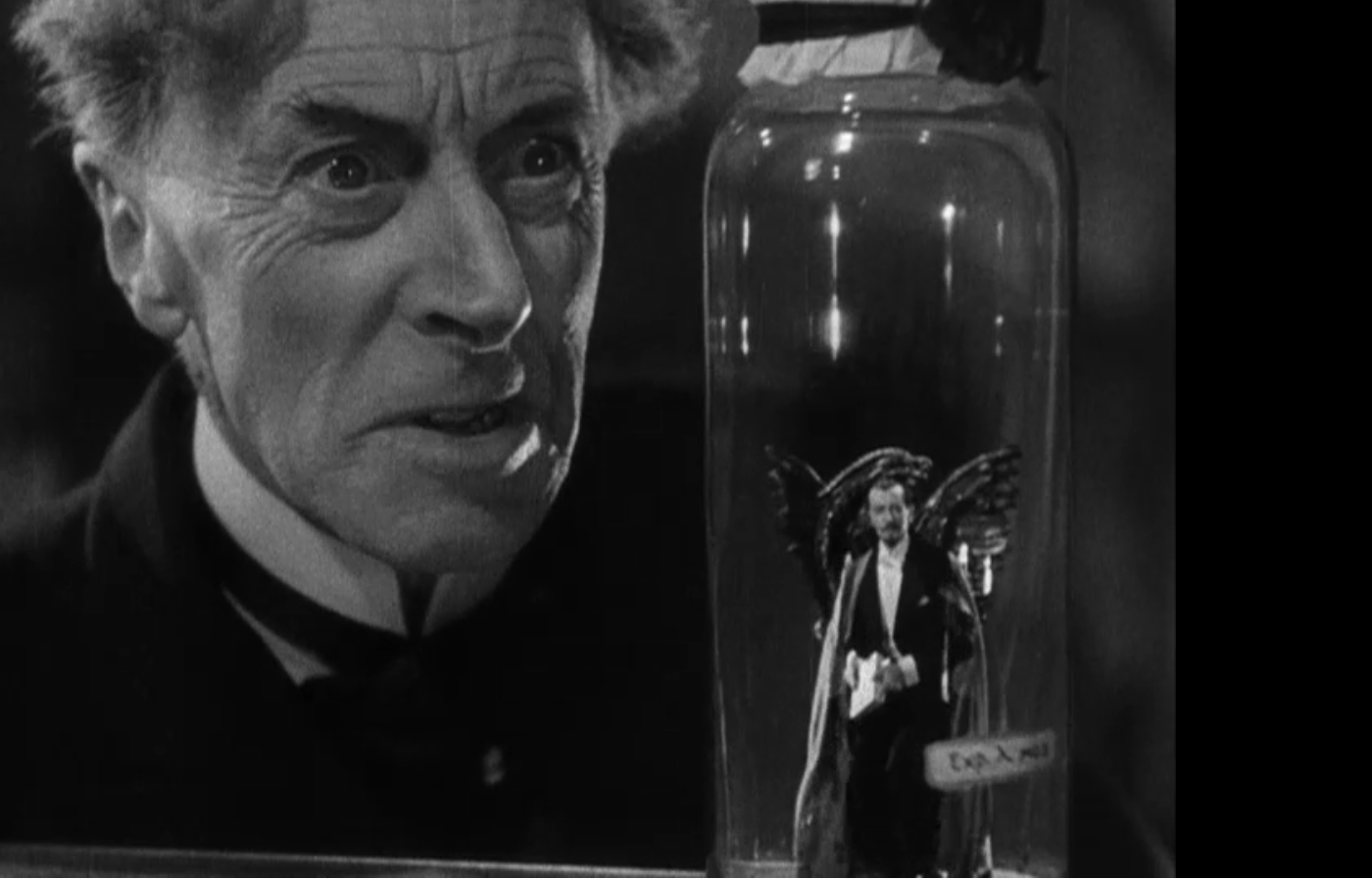 Pretorius crafts one of the film’s two overtly comedic scenes. Wishing to show Frankenstein his erstwhile results in reanimating dead tissue, he brings about a number of glass jars. Each contains a tiny homunculus dressed in satirical clothing, running around and squawking with the voice of a small mouse. One of them even contains a mermaid. “Alone,” he tells Frankenstein, “you have created a man. Now, together, we will create his mate.” The special effects of the scene are fabulous, especially for 1935, and the way Pretorius delivers the kooky material with absolute conviction drives it home. 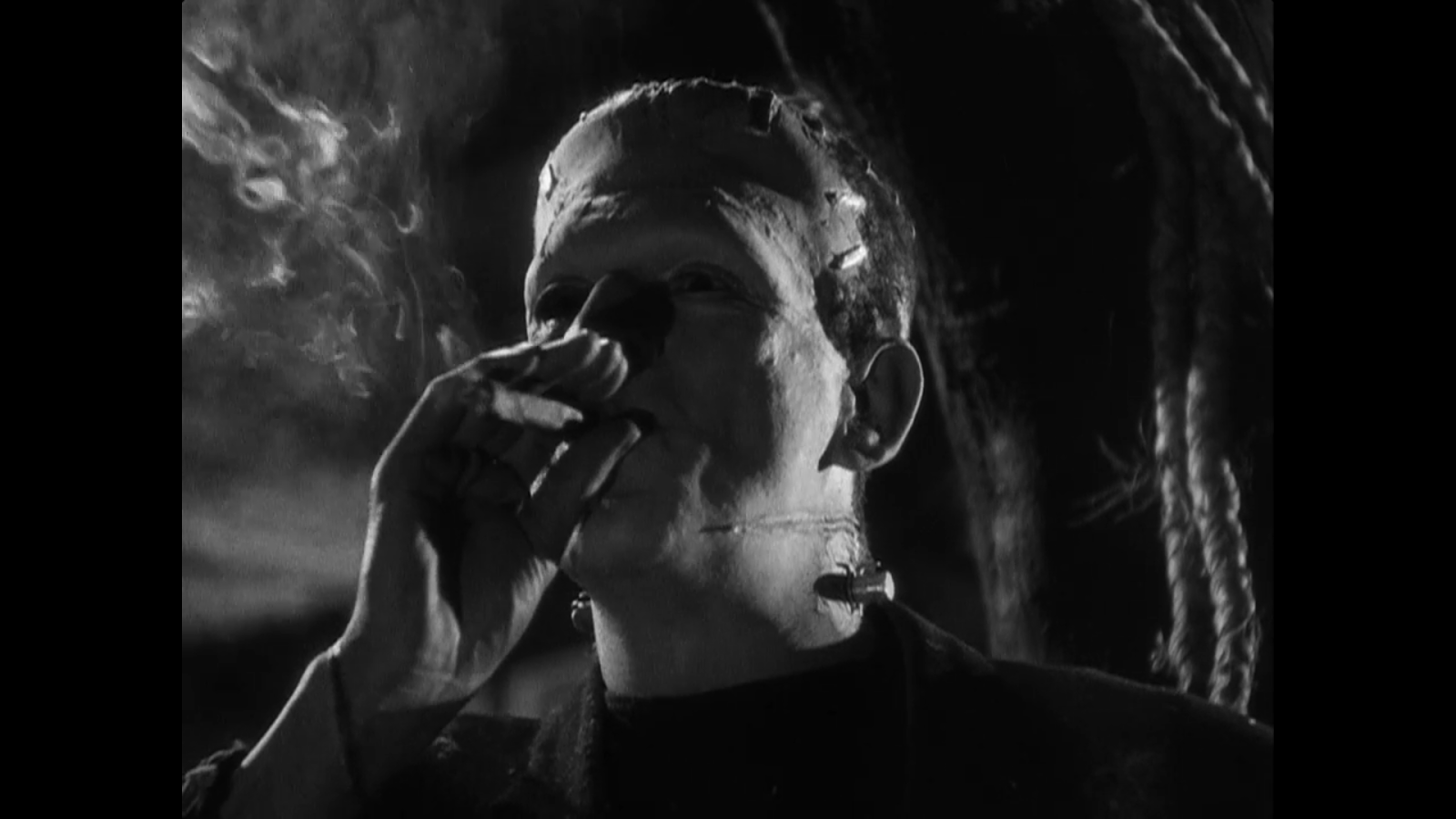 The second openly humorous scene is also one of its most touching, when Frankenstein’s monster stumbles into the hut of a poor, hermited, blind musician (O.P. Heggie). The blind man has been alone so long, he thanks God for the company. The monster is equally overjoyed to find a companion incapable of judging him by appearance, and the two become friends. This musician is the one who teaches the monster to speak; also, to drink wine and smoke. As the two sit and bond, the monster, holding a cigar, delivers lines like “Smoke. Good!” The shocking nature of the comedy maintains its humor even today while the scene simultaneously juggles the film’s mounting pathos, evolving into the monster’s declaration: “I want friend like me.”

Mocking the flaws of humanity is the foundation of Bride of Frankenstein’s sense of humor, as well as the more superficial comedy from elements like Frankenstein’s housekeeper Minnie (Una O’Connor), who shrieks like a banshee on more than enough occasions. That said, the film isn’t without its genuine moments of horror. Frankenstein’s monster dispatches ten people throughout the picture, and Whale’s spooky atmosphere pulls all the haunting cinematography and surrealist imagery one expects from horror inspired by German Expressionism.

Joyless Creatures writes, “Bride of Frankenstein is miraculously able to make us care for a mass of flesh who experiences firsthand the cruelty and loneliness inherent to being alive. Somehow, in the trappings of a vivid horror-comedy, James Whale is able to make a humanist masterpiece on the painful difficulties of finding understanding in our world, making Bride of Frankenstein one of the most agile and beguiling concoctions Hollywood has ever offered.”

Countless horror films are indebted to Bride of Frankenstein’s ingenuity and blend of genres that create its unique pacing and style. The film contains all the spooks and scares of true horror yet, by the film’s conclusion, Pretorius has taken place as the film’s villain over the monster. The monster is the tragic hero of the piece, having been bestowed both a friend and a bride only to have them both taken away from him.