Why is Phyllis in “Double Indemnity” hailed as one of cinema’s greatest femme fatales?

The seductive and deadly femme fatale is a staple of the film noir genre. She defied gender conventions of the time, revealing herself to be intelligent, cunning, and almost always duplicitous. Cinema scholars often refer to Barbara Stanwyck’s character of Phyllis Dietrichson in Double Indemnity (1944) as one of the top examples of the femme fatale, as her conniving spirit and good looks worked all the men in her story to her whims.

Cinema Autopsy says, “The final key element of any film noir is the femme fatale – the beautiful woman who entraps the hero with promises of money, sex and love, only to ultimately betray him. Barbara Stanwyck’s portrayal of Phyllis Dietrichson is still considered one of the all time great femme fatales as she perfectly embodies the seductress feigning helplessness who is gradually revealed to be manipulative and deadly.”

When we first meet Phyllis, her character is perfectly introduced through brilliant presentation. We’re stuck at the eye level of Walter (Fred MacMurray), staring up at her as she stands at the top of a staircase, half-dressed. She’s the dominant figure in the scene. Her allure is quite evident, and her visual position above the other characters is easily symbolic of her control. It only takes seconds for Walter to be entranced by her, and the flirtatious banter begins. He spots her “honey of an anklet,” and is keen to make his attractions known.

“You from the Automobile Club?” she asks.

“All Risk,” Walter answers. It turns out that’s quite true. 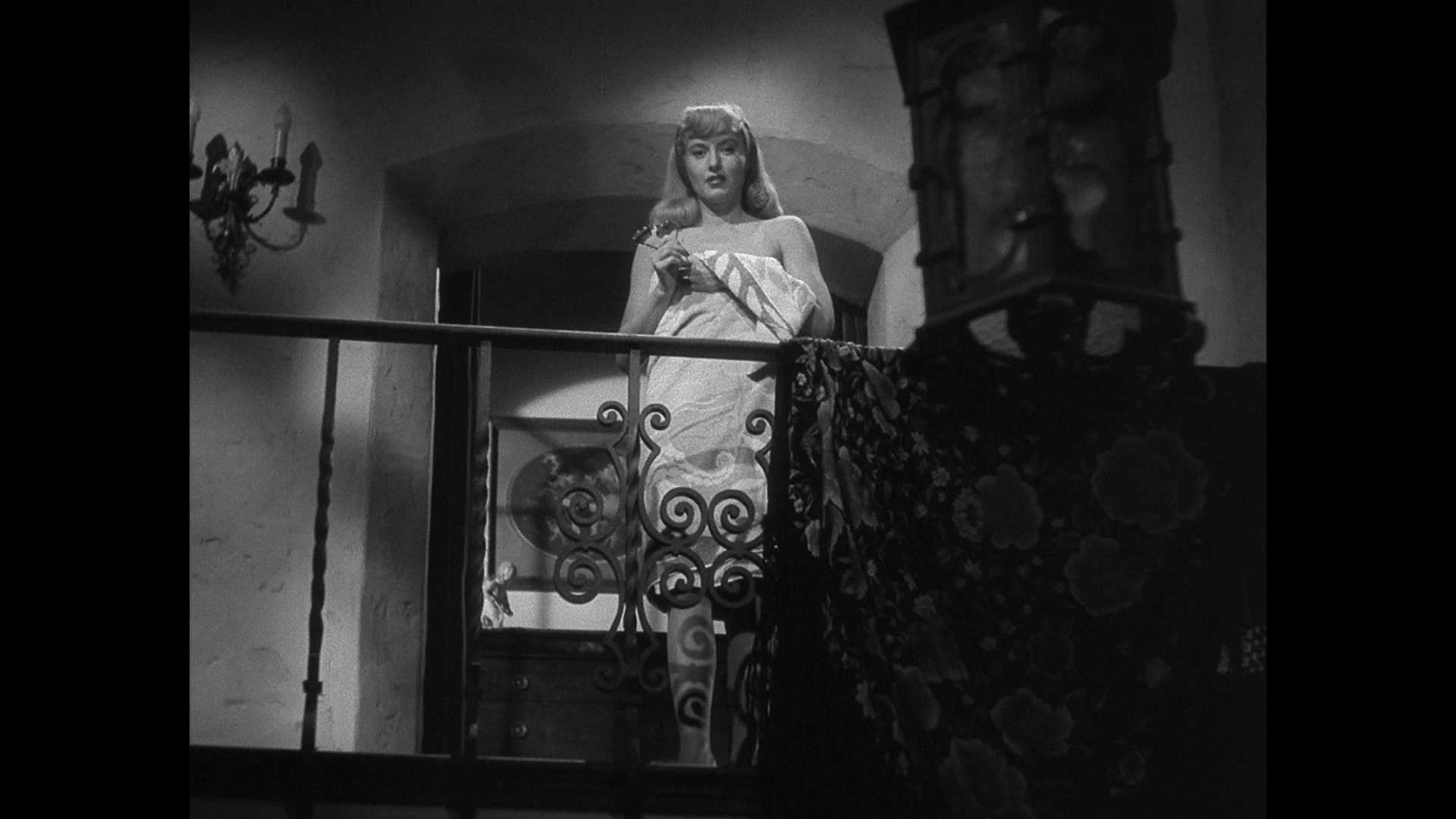 The film sexualizes Phyllis in a manner that lets the audience know what we’re supposed to think of her. As Student Pulse examines, “Describing their first encounter, Walter Neff, the narrator and central male figure of the film, immediately verbalizes the way Phyllis is meant to be perceived both by the male characters and by the audience. His eyes, along with the camera, are immediately drawn to her curvaceous figure, her tight-fitting clothes, and her tempting anklet. The camera follows his lustful gaze giving a long close-up of the anklet in question. Her body is taken apart into sections like a bar of chocolate to be separately viewed and savored by Walter and the audience. Again she is not given the dignity of being an entire person. Walter is instantly drawn to her, not out of compassion for her predicament, not out of admiration for her wit or her audacity, but out of pure lust.”

Phyllis has no conscience or scruples about the way she behaves. She knows exactly the way she’s perceived and uses it to her benefit. She is objectified to the point she wishes to be, as she realizes that male lust is the key to getting what she wants. She presents herself as a piece of material on purpose, and it works. She uses her charms to ensnare a rich husband, then to dipatch him and reap the rewards. She feels no need to directly demoralize the men she meets to establish power over them, she knows it’s more natural than that. Her power over men isn’t forced or even asserted, it simply exists.

Modern Times says, “Phyllis is so indifferent to the feelings of others that she is able to use them at her leisure. And, since she experiences no involvement, she remains free to operate without a sense of guilt. The killing of her husband finds her ablaze with satisfaction. And Walter who initially tries to pull out of their deadly arrangement is verbally poisoned. And now… Moreover, when he shows up later with murderous intentions of his own toward her, he’s faced with more of the same. What makes her so attractive is the way in which she operates. Walter hits on it when he says, ‘How could I have known that murder can sometimes smell like honeysuckle?’”

Double Indemnity is unique in that it contains a powerful femme fatale who is responsible for the downfall of a male figure that is also a bad guy. Walter in this story isn’t a hero - he’s a criminal and a murderer, which is established from the start. He’s seduced by Phyllis and the thrill of doing something outside the scope of his everyday life. Roger Ebert says, “He’s aloof, cold, hard, terse. He always calls her “baby,” as if she’s a brand, not a woman. His eyes are guarded and his posture reserved. He’s not moonstruck. The hero is not a criminal, but a weak man who is tempted and succumbs. In this “double” story, the woman and man tempt one another; neither would have acted alone. Both are attracted not so much by the crime as by the thrill of committing it with the other person.” 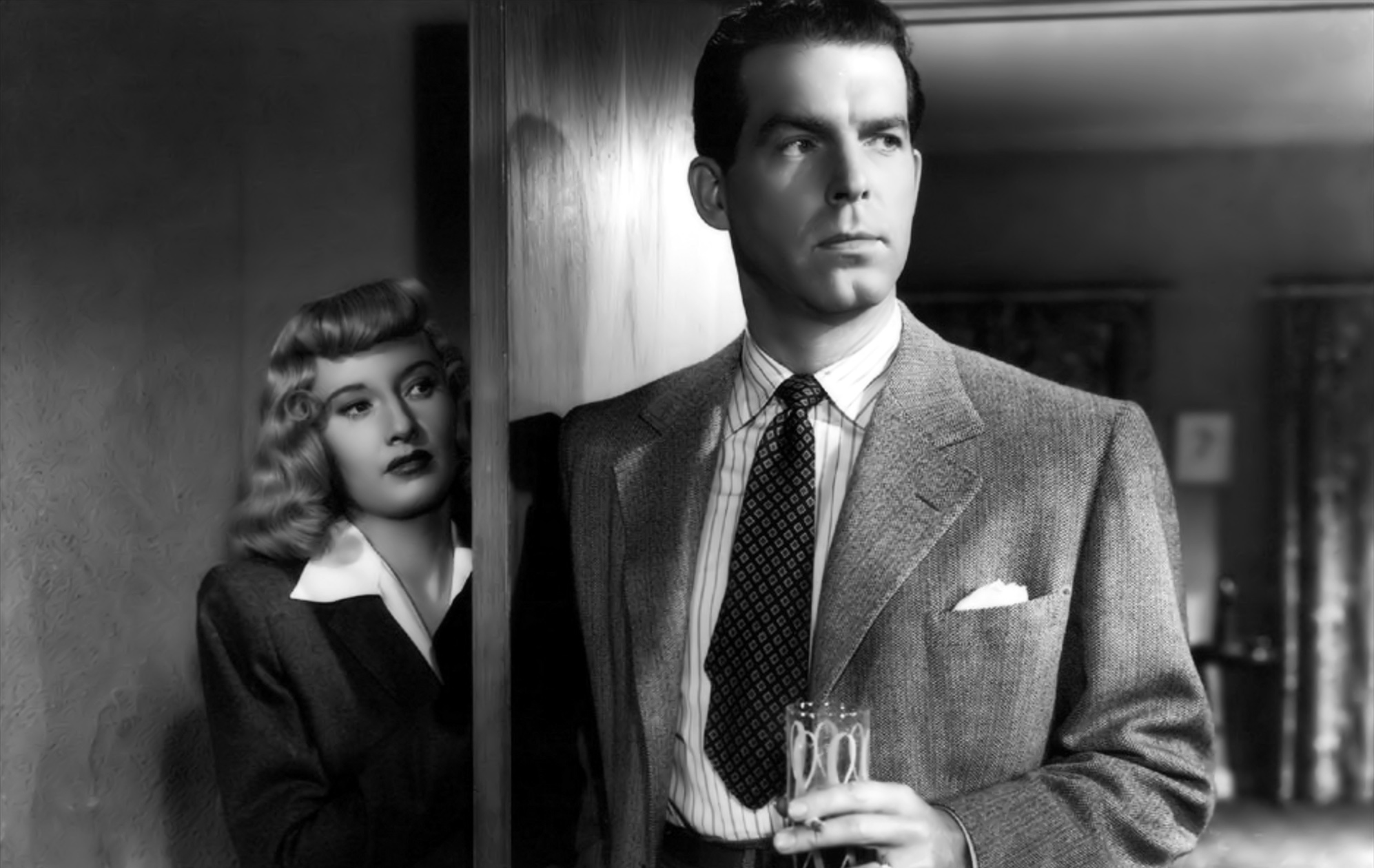 Student Pulse sums up both characters, examining why Phyllis is such a wonderful femme fatale predator, and why Walter’s undoing strikes a nerve with audiences. They write, “In the end, we are meant to identify with Walter. As the narrator, he controls the story and its tone, and places himself in the position of deluded victim. He is every bit as much a murderer as Phyllis. He committed his crime willingly because he thought it would give him something he wanted, just like Phyllis herself. Nevertheless, she gets shot alone in the dark and left dead on the carpet, while Walter gets a sentimental farewell scene and gets to explain his tortured soul to the audience. He is a criminal and the film does not deny that. He fails in his escape plan and will soon face the consequences of what he has done, but the audience is supposed to see this as a tragic fall rather than as the destruction of a dangerous force of evil. In the end, it is not murder that is Phyllis’s gravest crime, but the arrogant assumption that she can defeat a man and bend him to her will.”

Despite Water’s criminality, this renders him the hero of the piece. He’s the character the audience is supposed to identify with and root for, so much as one wants to root for a killer and thief. And even though he committed the crimes, he did so under the spell of Phyllis. He was doomed from the first moment they met, as she stood atop that staircase and he verbalized “All Risk” - every moment they spent together was bathed in that risk, and it turned out to be more than either of them could handle. Phyllis transformed a regular, bored man into something more—something which ended both their lives.