Why is “Boyz N The Hood” still relevant after 25 years?

Quick Answer: Boyz n the Hood shows a landscape and lifestyle many of us didn’t grow up with or see first-hand, but the message and story are endlessly relatable and relevant to American culture even 25 years after its release.

Twenty five years ago, John Singleton’s Boyz n the Hood (1991) opened up a cinematic window into the stark realities of coming of age in South Central Los Angeles. It shows a life in which violence is rampant, drugs are everywhere, and teenagers regularly have babies and describe themselves as “getting old.” As we learn from the film’s devastating opening title scenes, they’re sort of right: one out of every 21 black males will die by murder, the film announces, most at the hands of other black men. Preserved by the National Film Registry in 2002 as a film “culturally, historically, or aesthetically significant,” Boyz n the Hood still resonates today as a cautionary tale with messages of resilience, responsibility, awareness and determination.

When released, the movie marked a shift in filmmaking about a very complicated subject which up until then had often been dealt with only in stereotypes. Boyz n the Hood directly explored the nature of the problem while also humanizing its characters as more than the casualities of wanton violence, drug use, and death. These characters aren’t teenage parents, alcoholics, and gang members out of choice, but because they have been told there’s no other option.

NPR recalls, “Singleton’s film exploded off the screen, challenging the tabloid stereotypes of urban life and chipping away at notions of who could and should be making movies in Hollywood.” Boyz took an untested cast of black actors and sold them to an American audience. The L.A. Times noted Boyz was “the cinematic version of what rap groups like N.W.A had been doing for years—sounding the alarm about an untenable situation for people living in a particular part of Los Angeles.” The film was selected for Cannes and received an extraordinary standing ovation. John Singleton received two Academy Award nominations for the work, and the film made most of its then-unknown cast (including first-time actor Ice Cube) into household names. It didn’t do all that simply by existing as a mainstream film about a controversial and complicated subject in America. It did it by using that story to show a reality that Americans didn’t see beyond news reports — a reality which, unfortunately, rings familiar through the changes in time, albeit in different contexts.

“When we first did the movie, we felt like we was teaching America about a part of itself that they don’t see,” Ice Cube told MTV. “We was teaching you about people like Doughboy and why he is the way he is.”

With a homicide rate that has dropped 300% over the last two decades, the Los Angeles of today isn’t the same city as Singleton’s 1991 setting, a place that was hurting and angry after the Rodney King trials and in conflict over O.J. — a city where unchecked black-on-black crime forced increased police presence, in turn forcing cops of both races to respond to every provocation with overreaction. Yet racial violence and conflict are issues we see and feel as much as ever today. It’s still true that the murder rate for black men is four times the national average. In some respects, it’s a shame that the film is as culturally relevant in 2016 as it was in 1991. In modern America, we see fires burning in places like Ferguson and Baltimore, still in protest of bad cops operating in a broken system.

Moments before the film’s climactic murder

Above all, though, despite its gloomy narrative, Singleton’s film does inspire hope. In the final scene, Ice Cube’s character Doughboy recollects on the revenge-fueled triple homicide he performed the night before, saying, “It just goes on and on, you know. Next thing you know, somebody might try and smoke me. Don’t matter, doe. We all gotta go sometime, huh?” On-screen text then informs us he is murdered two weeks later. But the film doesn’t end there. The next screen tells us Tre (Cuba Gooding Jr.), the film’s central character whose story plays as an autobiographical parallel to Singleton’s, goes on to college in the fall with his girlfriend. Tre has been raised with a sense of discipline, purpose and restraint by a strong father figure. He avoids the gangs and doesn’t succumb to the seemingly inevitable in his environment — and he gets out. Singleton grew up with similar rearing and a similar outcome. “Inglewood was Blood ‘hood,” Singleton told the LA Times. “And where my father lived on Vermont and 101st, they were all Crips. So most of the people I grew up with, they were from 101st. And so, even if you are not affiliated, you’re affiliated. It’s nothing that I would ever claim, but it’s just like you know it. Even if you don’t rep it, you know it.”

Singleton’s message is that just because you’re in it doesn’t mean you have to be in it, even when the alternatives seem nonexistent. Furious Styles (Laurence Fishburne) tries to make this point mid-way through the film, in his billboard-backed neighborhood speech about gentrification and the prevalence of gun shops and liquor stores in South Central. “They want us to kill ourselves,” he tells the crowd, who are reluctant or unable to appreciate his perspective.

“What am I supposed to do? Fool roll up, try to smoke me? I’m gonna shoot the motherfucker if he don’t kill me first,” someone in the crowd retorts.

“You doing exactly what they want you to do,” Furious answers. “You have to think, young brother, about your future.” It is advice from Singleton spoken through Furious; it is his suggestion for how to make things better. 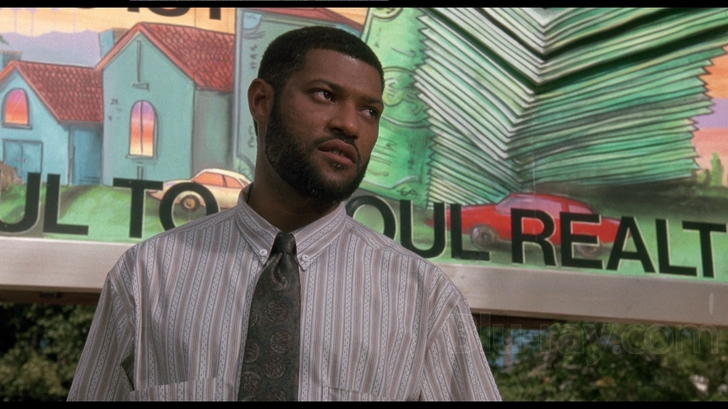 Doughboy didn’t hear that speech. “We all gotta go sometime,” he says, but the film’s point is that it doesn’t have to be at the warm end of a shotgun. If we accept an unjust world as fact, then people with promise, people capable of helping the image of a community and doing good things, people like Ricky (Morris Chestnut), end up as nothing but the statistic at the front of the film.

Ice Cube continued to MTV, saying, “The movie holds up. The movie had been used as a tool to teach people about the ’hood that they may not know about. I think the movie is a definite classic. It’s definitely as potent today as it was back then.”

From an early scene in which four kids walk along a set of train tracks to discover a dead body, Boyz n the Hood at times plays like an urban Stand By Me (1986), a movie whose final lines ask whether people ever have friends as close as the ones they had as kids (“Jesus, does anyone?”) Like Stand by Me, Boyz n the Hood speaks to the power of brotherhood, camaraderie and compassion. Boyz N The Hood’s last lines are notably darker but arguably echo the same message, while revealing through Doughboy what happens when a person becomes a victim of his situation. The conviction of Tre and the wisdom of Furious are the film’s greatest gifts, and the concepts they put forth will forever ring true. As a coming of age story, Boyz n the Hood continues to make people consider their own journeys, however different they may be from what we see onscreen. We’ve all grown up in different ways, but the film puts value on the determination to overcome obstacles and develop one’s future while reiterating the importance of friendship.