How are the 70 year-old characters of “Moomins on the Riviera” relevant to today’s culture?

The Moomins’ history dates back to 1945, when Finnish artist Tove Jansson created them as a means of distraction from the Second World War. The small, mouthless, hippopotamus-like creatures soon became a regular comic strip in London’s Evening News in the 1950s, branching out as a globally successful comic in the years that followed. While the characters are not incredibly well-known among modern audiences in the United States, they achieved quick popularity in their home country of Finland and beyond, maintaining renown in Scandinavia and the rest of Europe into the present day.

The Moomins champion a few admirable ideas: tolerance, friendship, and relishing in the simple pleasures of life. “Live in peace, plant potatoes and dream,” the paternal figure Moominpappa says, which is as splendid a mantra as can be. These concepts were important and timely following World War II, but their power never goes out of style.

Moomins on the Riviera (2014) is a feature-length animated film starring the characters from the comic strips. Using classic hand-drawn 2D animation with a minimalist color palette, the film harkens back to the aged quality of the source material. It moves and feels like something from the past, which in today’s landscape can be a welcome departure from the bright, colorful, technology-heavy animation that covers the world of animation. 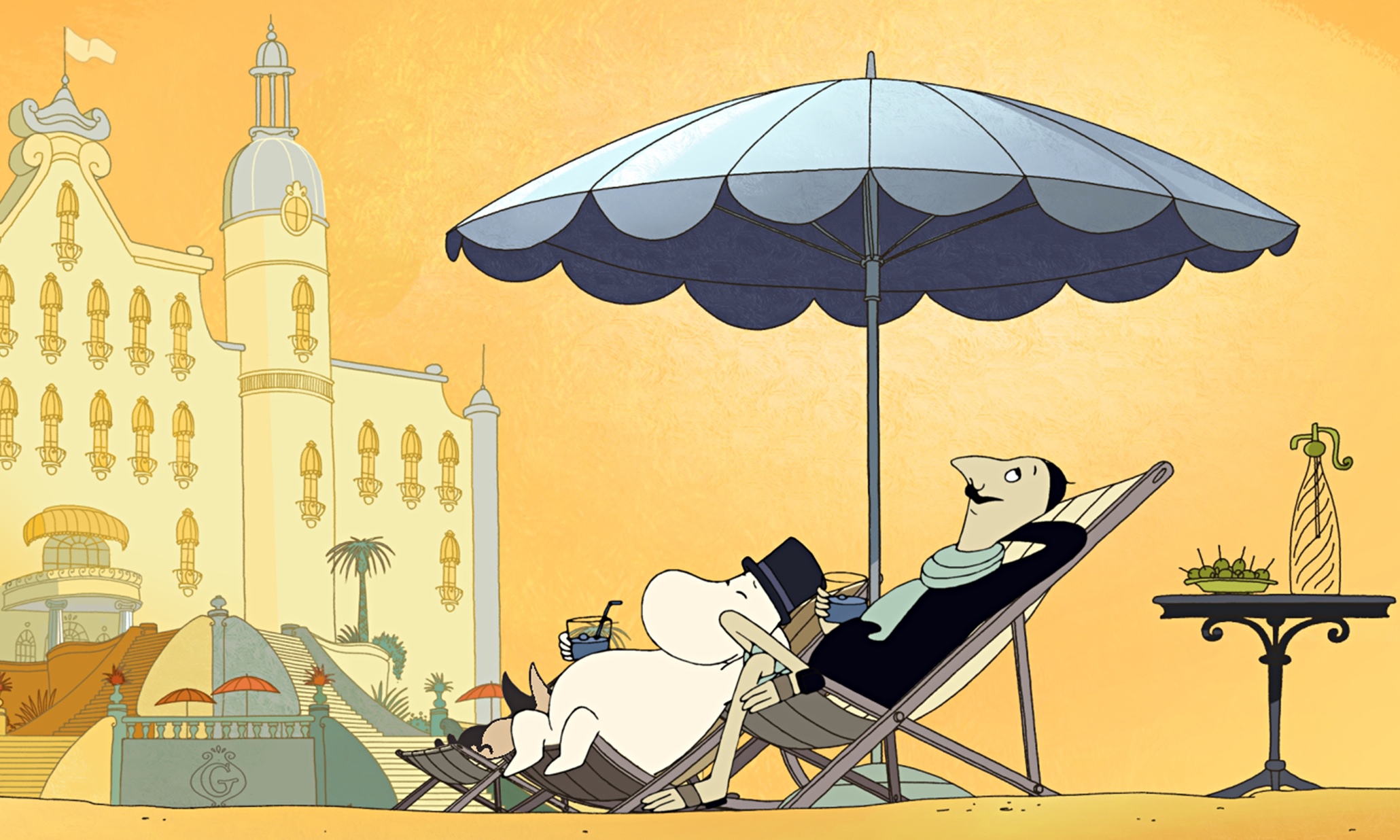 The story follows Moominmamma, Moominpappa, and Moomin, who set off from their home in Moominvalley on a boat headed for the French Riviera. They are joined by Snorkmaiden, Moomin’s love interest, as well as a frightening tiny creature named Little My. At the Riviera, their unity is tested. Moominpappa renames the family the “de Moomins” to match his elite surroundings, Snarkmaiden is overwhelmed by the presence of a celebrity, and the Moomins all take up residence in a lavish hotel that they don’t understand isn’t free. The ending is predictable and obvious, but the eternal messages of the film harken the same themes that birthed The Moomins years ago.

Moomins on the Riviera expresses “family versus loneliness, adventure, how to handle a hard time – all set against storms and mountains,” says Sophia Janssen, niece of Tove Janssen and current Artistic Director of the Moomin company. “People find a sense of belonging in the Moomins.” The films contain a moral nuance that appeals to adults and simple themes that children can identify with, even if they don’t know they are doing so.

The timing of the film is also apt. The modern world is fraught with terrorism, heavy on consumerism, and feels as polarized between different types of people as it has ever been. Sadly, some may argue little has changed since the 1940s, making the optimistic messages of the Moomins resonate just as profoundly today as they did then. As such, stories that promote equality, simplicity, and togetherness are appreciated in our current global political climate of antagonism.

The Moomin legacy is a balance of culture and commerce. Pushing into a modern film is a fantastic way of distributing the Moomin characters to a larger audience. The film can work to spread their appeal to countries where Moomins are forgotten or lack popularity, but the decision to maintain the original animation style preserves the authenticity of the piece. Moomins on the Riviera creatively builds nostalgia for a simpler way of life and tells stories that make sense in the modern world. Until society undergoes a major upheaval, the themes of the Moomins will remain timelessly modern.