Why don’t “Star Trek” uniforms have any pockets?

Star Trek uniforms are one of the most identifiable wardrobe items in the history of film and television. From the red shirts of ill-fated away team members in The Original Series (1966-1969) to the iconic suits of The Next Generation’s (1987-1994) cast, Trek uniforms are one of a kind. Across the ages and redesigns, most Trek uniforms boast one grand similarity: a distinct lack of pockets. While it’s easy to understand the lack of pocketing in Deanna Troi’s (Marina Sirtis) skin-tight TNG unitard, one has to think it would be easier for an away team of officers to carry tools and Tricorders to the surface of unknown planets if they had a pocket or two. Instead they are held in hands, carried in bags, or strapped to an invisible belt like a hammer on the waist of a futuristic carpenter.

“The Star Trek Writers/Directors Guide” is a real handbook put together by the series’ original set of producers. Its intent was to exist as a means for freelance script writers to maintain uniformity within the series. It advised wannabe writers on the “do’s” and “don’ts” of writing for Trek. Among its guidelines are such notations as, “Never have members of the crew putting things into pockets; there are no pockets. When equipment is needed, it is attached to special belts (as in the case of the communicator and phaser).” The guide also illuminated Trek’s narrative and emotional architectural design, encouraging writers to view the Enterprise as a comfortable counterpoint to the unusual experiences the crew had outside the ship, as well as reminding writers the outer space setting is merely a means for exploring the drama of every day human life. “Their actions and reactions are our greatest need and is the most important angle,” it says, along with more basic reminders such as all Star Trek episodes have four acts, and to not write stories that call for massively expensive new sets to be constructed.

But that still doesn’t answer the question of why the uniforms don’t have pockets. 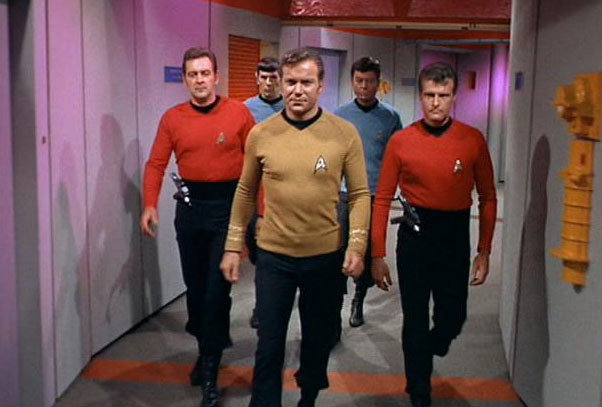 The easy answer is that The Original Series producers thought it made for a more futuristic look. In the show’s first season, equipment was attached to Velcro belts worn at the waist. In the two seasons following, the belts disappeared and Velcro patches were sewn directly into the actors’ pants, allowing the crew members to attach objects to their waists as if by some mystical, high-tech futuristic force; a cheap 1960s special effect. The lack of high definition on television helped the patches go unnoticed.

When The Original Series’ cast films began running in 1979, pockets started to show up. A few crew members in The Motion Picture wear uniforms with leg cargo pockets, and the field jackets worn by the main bridge crew at the end of the picture have plenty. The stringency of the rule seemed to have let up during the decade that passed between The Original Series’ cancelation and the first film being made. But, when The Next Generation hit the airwaves in 1987, the mostly-unpocketed wardrobe was back. Some uniforms of the first two seasons had a pocket for a tiny phaser gun, but all other equipment was clipped to the side of the uniform, again via an invisible mechanism like its predecessor. In later seasons when the uniforms were modified, the pockets seem to disappear again for the main crew, while only cadet-level Starfleet personnel was seen with trouser pockets. The character of Scotty (James Doohan) also wore a vest with pockets in his TNG-era cameo in “Relics,” as well as in Star Trek V: The Undiscovered Country (1989).

In later series, pockets would be seen here and there—for instance, the overcoat regularly worn by B’Elanna Torres (Roxann Dawson) on Voyager (1995-2001) contained a pocket for tools (although in reality, this pocket was added only to conceal Dawson’s pregnancy.)

A cadet with pocketed trousers as seen on TNG

On Enterprise (2001-2005), many uniforms had pockets, an intentional design as the producers felt it added to the primitive nature of the characters since the series is a prequel to the others.

On a more simplistic level, costume designers would surely suggest there are no pockets in Trek because pockets ruin lines. Star Trek uniforms are sleek and incredibly well-fitting because they’re basically space pajamas, with very little in the way of accessories to bend or fold the material.

Within the Trek universe, there is also a reduced need for carrying things. There is no money so they don’t have wallets. Their doors and storage require no keys. Unless they are performing a special task, they just don’t have to hold on to all that much gear —and when they do, the magic hip-clip contraptions seem to work pretty well. Overall, it is understandable why Trek is relatively pocket-free. Now we just have to wait a couple hundred more years to see if this fashion prophecy proves true.