How did the production team of “Star Trek Beyond” bring the Star Trek universe to life?

Quick Answer: Star Trek Beyond, the third installment of the Star Trek franchise’s cinematic reboot, updates the franchise with a visually bold, bright future. A team of make-up and practical effects artists created over 50 new alien species for the film, while production designer Tom Sanders designed the film’s other-worldly locales, frequently using real locations as starting points. Director Justin Lin said he preferred working from actual places because “I wanted it to feel tactile and real and not just two guys in front of a green screen.” Even though not all details of the craftmanship in production design, makeup and costumes can be captured on camera, the production team’s combined work creates the total atmosphere and feeling of the film.

Envisioning creator Gene Roddenberry’s futuristic universe 50 years after the original Star Trek (1966) TV series aired, the production team of Star Trek Beyond (2016) faced the challenging task of paying homage to past Star Trek iterations while updating the look for a visually fresh and contemporary movie experience. They had to bring new imaginary creatures and planets to life. With visuals both old (Spock’s iconic ears and the U.S.S. Enterprise), and new (the alien Jayla and planet Altamid), Star Trek Beyond remains within the familiar Star Trek aesthetic while also moving (if you’ll excuse the pun) beyond.

According to the film’s production notes, the makeup and costume designers created over 50 distinct alien species for Beyond to honor Star Trek’s 50 anniversary. Making this many creatures required a large team of make-up artists, practical effects artists, painters and sculptors that spanned the globe from Burbank, California, to Vancouver, to Dubai. The alien prosthetics were all designed so that the actors would have as much movement as possible, but that’s not to say that they were always comfortable – actor Idris Elba describes the experience as “claustrophobic.” 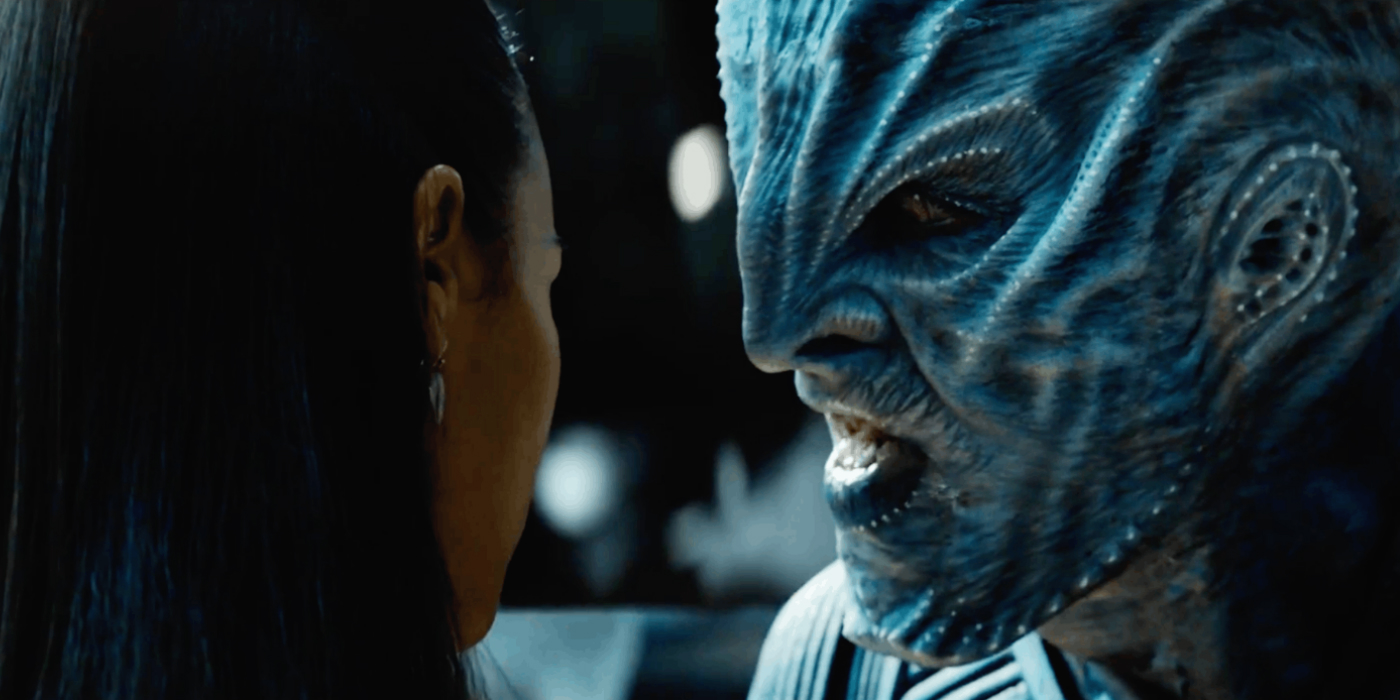 The two most recognizable designs in the film are Elba’s “Krall,” the film’s antagonist, and Sofia Boutella’s “Jaylah,” the crew’s unexpected new ally. Elba described the process of getting into character as extensive, to say the least: the full prosthetic took five hours to put on and two to take off. But the real challenge was learning how to act in the prosthetics. “There was a learning curve for me as an actor because you can’t use the face you’re used to,” Elba explained in the press notes. “I had to take on a physicality that is not my own.”

Boutella did not have it much easier. She said that “there were days where [she would] wake up at 12:30 AM to get make-up before a morning shoot.” But both actors claimed the inconvenience was an advantage – Elba said that his claustrophobia in the prosthetics intensified his performance, and Boutella said that the “meditative state” that she would go into during a long makeup application helped her get into character.

“You can work for months perfecting the design,” make-up designer and effects supervisor Joel Harlow said, “but it’s not a character until the actor inhabits it.”

Costumer Designer Sanja Hays was conscious of staying true to the original designs. “I was already a big Trekkie, so I didn’t have to do much research,” Hays said. Still, she did give the clothing a “subtle update. The biggest change I made was adding sleeves to the women’s uniform, which Zoe [Saldana] appreciated.” 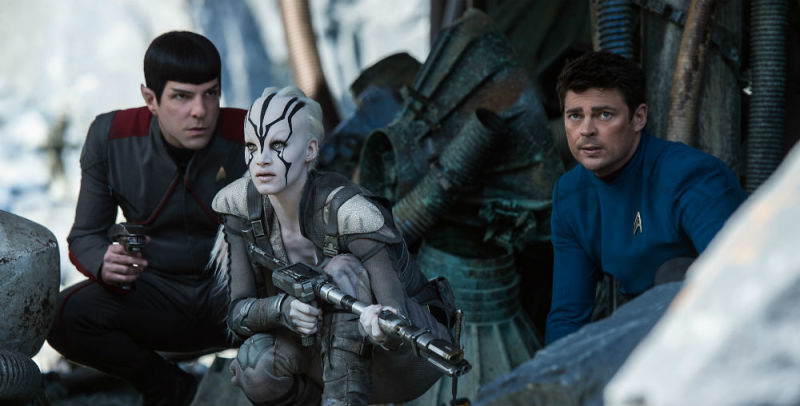 In addition to the characters, the team had to create worlds for these characters to inhabit. Production designer Tom Sanders worked from real locations as starting points for the film’s two primary settings. “In Star Trek, you don’t have the option to just go shoot on a street corner on a whim,” director Justin Lin said, but he preferred working from actual places to avoid the feeling of artificial imagery. “I wanted it to feel tactile and real and not just two guys in front of a green screen.”

The desolate planet Altamid, where the characters spend much of the film after crash-landing from the ruins of the U.S.S. Enterprise, was shot in a rock quarry in Vancouver, British Columbia. To the crew, the quarry seemed almost as dangerous as Altamid itself, due to intense heat and extremely sharp rocks. The sets for Krall’s complex were also constructed in the quarry, and Sanders took inspiration from the jagged rocks in designing Krall’s base. “I reverse engineered the design when I saw the mine outside Vancouver,” he said. “I wanted it to be this beautiful structure, a jewel in the midst of all this weird destruction and piles of rock.”

The team considered a soundstage for shooting the bustling metropolis Yorktown, but they chose instead to shoot in the real-life bustling metropolis of Dubai to capture “the scale of this larger than life city.” According to Lin, “Yorktown is the embodiment of Gene Roddenberry’s vision of the future: a huge society all kinds of people and aliens co-existing peacefully.”

Producer J.J. Abrams, who directed the previous two films of the series reboot (2009’s Star Trek and 2013’s Star Trek Into Darkness), agreed: “You’ve got all these different civilizations and cultures and species living together in one particular place, and visually representing everything the Federation stands for in a really cool way.” 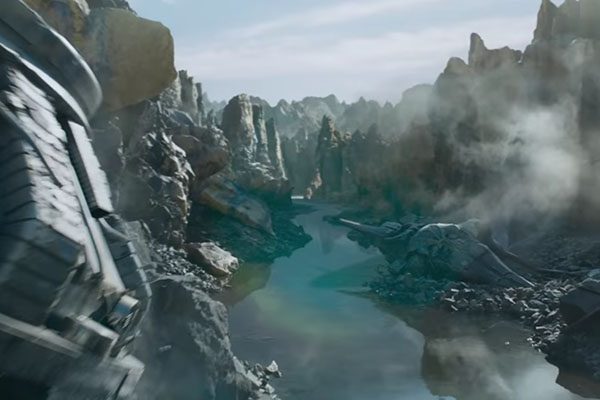 The planet Altamid in Star Trek Beyond (2016)

One bittersweet reality for a production team is that much of their detailed work doesn’t ever make it on camera. Actor Chris Pine, who plays Captain Kirk, admitted in the production notes that he often takes the level of craftsmanship for granted. “It’s all these tiny little things that maybe no one will see, but it’s incalculable the effect that it has on me,” he said. “It’s like playing in the backyard as a kid, but if you had the budget to make it as real as possible.”

The playful spirit of discovery and color that underlies Roddenberry’s original vision gave the production team plenty of material and motivation. As Hays summed it up, “So many other sci-fi movies take themselves so seriously; so apocalyptic and dark. I like that Star Trek presents a brighter future – you can have some fun with it.”