What is Wonder Woman’s backstory and origin?

Quick Answer: Wonder Woman was created in the early 1940s as a means of broadening public opinion about comic books and to create a heroine that would embody the best qualities of a strong, liberated woman. She was born from the soil of the earth in the image of the gods and raised by Amazonian women as a powerful fighter and a compassionate woman.

Wonder Woman is one of those iconic comic characters known by nearly everyone alive, even if they’ve never touched a comic book. She has that invisible plane, a curvaceous, muscled body, and all the star-spangled American qualities one would expect of a beloved heroine created in tandem with America taking up arms in World War II. Her introduction in All Star Comics #8 came in December 1941, just after Pearl Harbor was bombed and the USA joined one of the biggest battles in history. Since then, Wonder Woman’s feminist image of brains, beauty and brawn has been decorating T-shirts, comics, toys, lunch boxes, underpants and lampshades for generations, transforming her into a bona fide cultural icon.

Yet, until 2016’s Batman V. Superman: Dawn of Justice, the character had never been portrayed in a live-action theatrical-release film, and many of the millions who recognize her exterior surface know little about her origin or her evolution. As one would expect of an over 70 year-old character, there is a lot more to Wonder Woman than meets the eye. 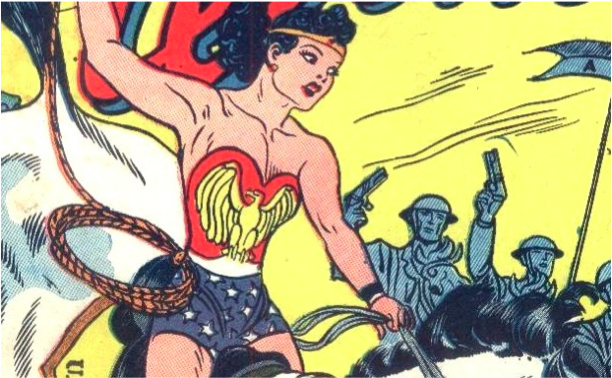 The origin of the character is actually quite abnormal. In the earliest days of their existence, comic books were seen as a contemptible artform. Superman and Batman were among the first stars of the medium, and their narratives were stories often celebrating violence during a time of global conflict, earning comic books a reputation as sex-horror serials which would assuredly be responsible for demonizing the youth of an already frustrated generation. At the time, Maxwell Charles Gaines, the “father of comics” who founded All-American Comics, hired internationally-renowned psychologist Dr. William Moulton Marston as a consultant in hopes of reaffirming comics as something more viable than nonsensical, hand-drawn torture porn. Marston had three degrees from Harvard and a PhD in psychology, had been employed as a lawyer, scientist, professor, screenwriter and consultant, and is remembered as the inventor of the polygraph. Gaines felt Marston had the prominence, intelligence and creativity to transform public opinion on the matter.

Marston’s insight was that even when a comic’s story is full of kidnapping, violence, and torture, or when a story depicts a woman bound to a stake facing death, the reader doesn’t root for her sacrifice—they want her to be saved. That trust in the positive resolution of the story was what mattered more than the voracity of the content.

An extremely insightful and globally-recognized intellectual, Marston was not without his own curiosities. He maintained a polyamorous romance with his wife and a younger woman with whom he was infatuated, fathering children with each as they all shared one home. His unorthodox personal relationships with these two women, whom he found to be brave and passionate in defying social norms and expectations, both contributed to the construction of what would become Wonder Woman. Marston was responsible for deciding the best way to thwart the oppressive masculinity of comic book stories was to craft a female hero, and in 1941, he submitted a script for the first iteration of Wonder Woman. In it, Marston explained “Wonder Woman’s Amazonian origins in ancient Greece, where men had kept women in chains, until they broke free and escaped. ‘The NEW WOMEN, thus freed and strengthened by supporting themselves (on Paradise Island), developed enormous physical and mental power.’” His comic, he said, was meant to chronicle “a great movement now under way—the growth in the power of women.” 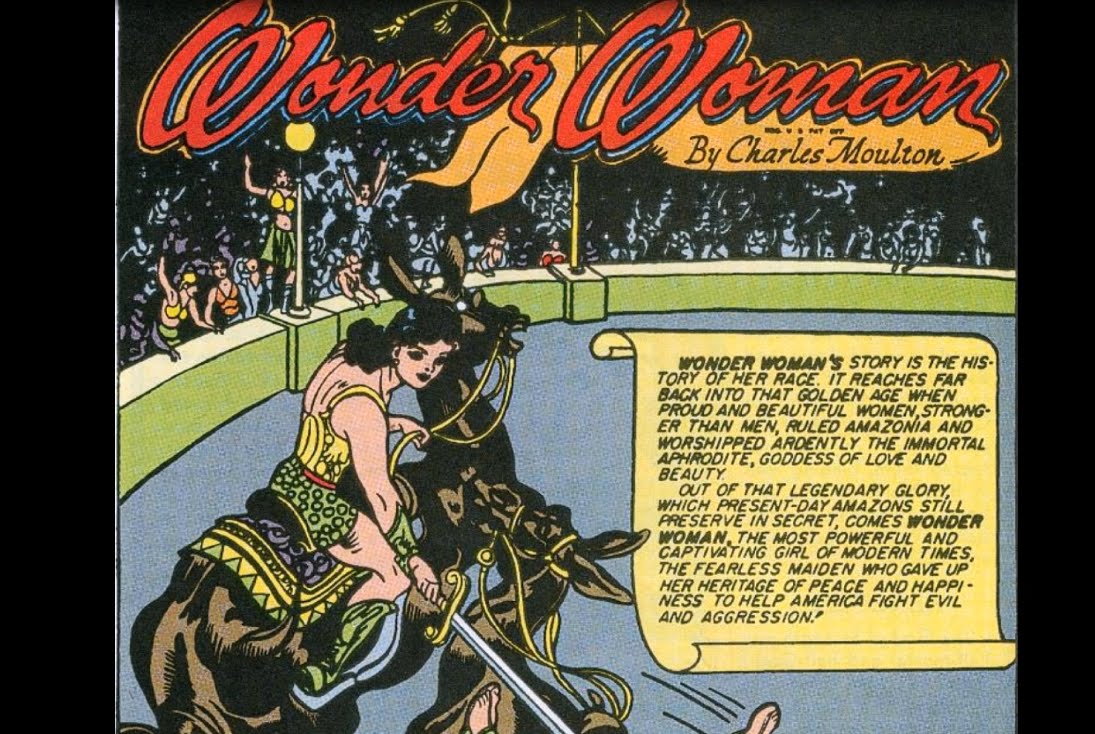 A comic explaining the majesty of Wonder Woman

When Wonder Woman debuted in All-Star Comics in 1941 and was put on the cover of Sensation Comics in 1942, she was dressed in a red bustier and blue underpants with knee-high leather boots and a gold tiara. Needless to say, at the time, Wonder Woman looked a little bit promiscuous. The National Organization for Decent Literature said she was underdressed. And so, Lauretta Bender, an associate professor of psychiatry at New York University’s medical school and a senior psychiatrist at Bellevue Hospital, was brought on board to clean up her image. The efforts were somewhat successful in appearance, but not in content. As Smithsonian Magazine writes, “In February 1943, Josette Frank, an expert on children’s literature, a leader of the Child Study Association and a member of Gaines’ advisory board, sent Gaines a letter, telling him that while she’d never been a fan of Wonder Woman, she felt she now had to speak out about its ‘sadistic bits showing women chained, tortured, etc.’” She had a point. In episode after episode, Wonder Woman is chained, bound, gagged, lassoed, tied, fettered and manacled. “Great girdle of Aphrodite!” she cries at one point. ‘Am I tired of being tied up!’” 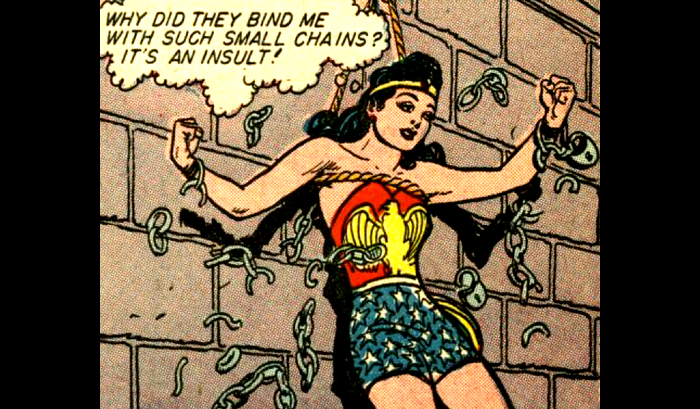 A comic in which Wonder Woman is bound to a wall

The Mary Sue writes, “Marston would later tell comic historian Coulton Waugh, ‘Frankly, Wonder Woman is psychological propaganda for the new type of woman who should, I believe, rule the world.’ You get a sense of that in her origin, even before she starts battling misogynists, Nazis, super-villains, conquerors and gods.”

That “origin” refers to Wonder Woman’s birth, which was a miraculous event crafted from the dust of the ground akin to a Greek god. She was raised by a group of women who groomed her into being an intelligent and formidable warrior who values intelligence and instruction. She is the best fighter in the universe, has been trained for battle since birth, yet remains feminine and caring. Wonder Woman basically has it all, knows how to use it, and looks damn good doing it. There’s no wonder she has survived generations. 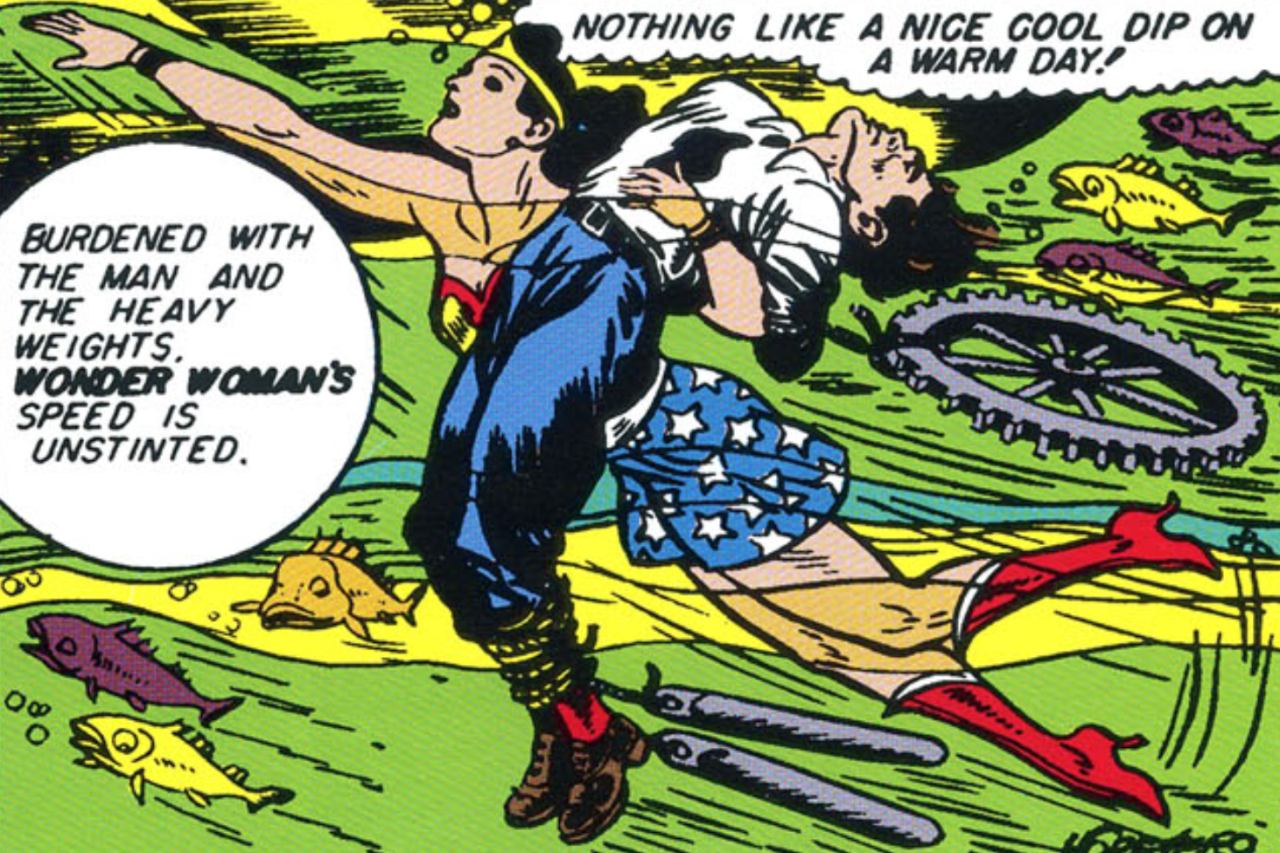 Her origin story as a person crafted from the clay of the earth in the image of the gods makes her something beyond human. Her strength and intellect are both on par with this creation, and throughout her comic life she has shown evidence of god-like powers (the ability to wield Thor’s hammer is one such example).

Like many superheroes, Wonder Woman has an alias she uses when pretending to be a regular old anybody living among the people. Hers is Diana Prince, an alias that has taken on many roles, including an army nurse and a boutique owner. She is also a founding member of the Justice League which debuted in 1960 with Superman, Batman, Martian Manhunter, Flash, Green Lantern, and Aquaman in tow.

As noted above, Wonder Woman somehow lived through all these decades without appearing in a feature theatrical film. 1967 saw a failed Wonder Woman TV pilot called Who’s Afraid of Diana Prince?—a campy, humorous take on the character in the same realm as Adam West’s Batman (1966-1968), here starring Linda Harrison in the titular role. There was also a made-for-TV Wonder Woman film in 1974 titled simply Wonder Woman. Lynda Carter then played her in the 1975 TV show Wonder Woman, which aired until 1979. NBC planned a reboot in 2011 starring Adrianna Palicki, but the project was shelved. Gal Gadot’s version of the character has a starring film due out in 2017. Gadot will then reprise the role in The Justice League Part One (2017) and The Justice League Part Two (2019). 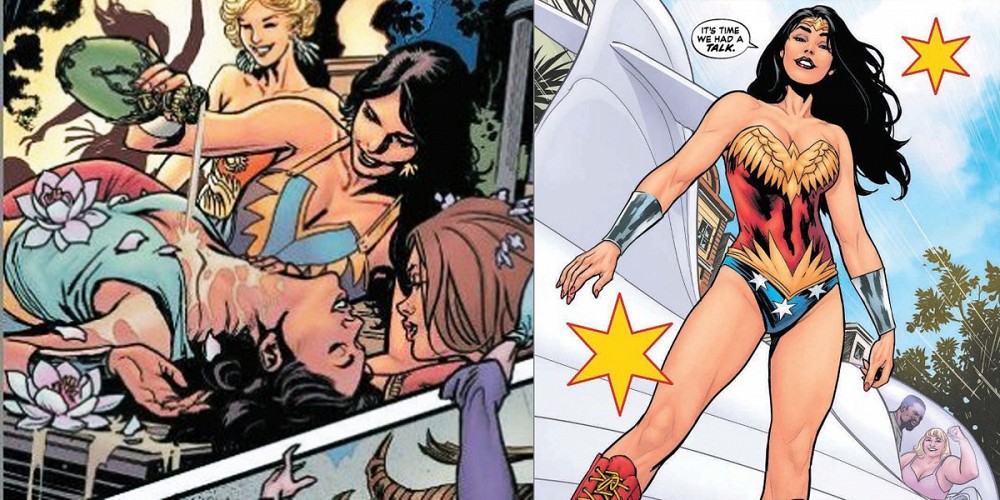 Wonder Woman’s origin story has been adjusted over the years. Recently (in DC Comics’ New 52 lineup) she was decreed the daughter of Zeus, undermining her original creation from the 1940s. In the 1980s, with Greg Potter and George Pérez, she was still born of the earth but her Amazonian upbringing was given different styling. The New 52 created a lot of backstory for Wonder Woman that didn’t previously exist, including the ability to draw power from her bracelets and to receive training from Ares, the God of War.

Whatever the changes, she has been gifted with superhuman awesomeness that comes from a place of supremacy since her original development. She will assuredly continue to be an icon of femininity, strength, courage, intelligence and compassion which anyone can admire.