How does “X-Men: Apocalypse” put female superheroes at the forefront?

Quick Answer: While superhero movies are dominating the box office, they are often scrutinized for a lack of compelling female superheroes. When a film does feature a female superhero, such as Black Widow in The Avengers, it often feels like an empty token gesture. The X-Men franchise stands apart due to its multifaceted female superheroes. X-Men: Apocalypse in particular has succeeded in putting its female heroes at the forefront, proving that women can be powerful, well-written role models.

Comic book movies have been scrutinized in recent years for a distinct lack of female superheroes. Marvel’s The Avengers (2012) is one of the most egregious offenders. In a cast full of male superheroes, Scarlett Johansson’s Black Widow is the only female, and she seems to be present to serve functions of tokenism and fetishization for the male gaze. It’s not hard to see that Johansson’s costume is more revealing than her underdeveloped storyline.

Unlike most superhero films, the X-Men franchise has excelled at featuring multifaceted female superheroes. Ever since the first X-Men installment in 2000, women have been prominent in the X-Men universe. Halle Berry’s Storm, Famke Janssen’s Jean Grey, Anna Paquin’s Rogue and Rebecca Romjin’s Mystique all played important roles in the first run of the series. Not only were their characters crucial to the series, but each woman also had a complex and multidimensional storyline. The last three installments, however — X-Men: First Class (2011), X-Men: Days of Future Past (2014) and X-Men: Apocalypse (2016) — have elevated the series’ portrayal of female heroes fruther. Apocalypse in particular puts its female heroes at the forefront.

X-Men: Apocalypse boasts fifteen mutants, five of which are female. Two of them, Raven/Mystique (Jennifer Lawrence) and Jean Grey (Sophie Turner), are central characters in the film. In fact, the pair are arguably more important protagonists than Professor X (James McAvoy), who is essentially a guidance counselor to the young new guard of mutants. 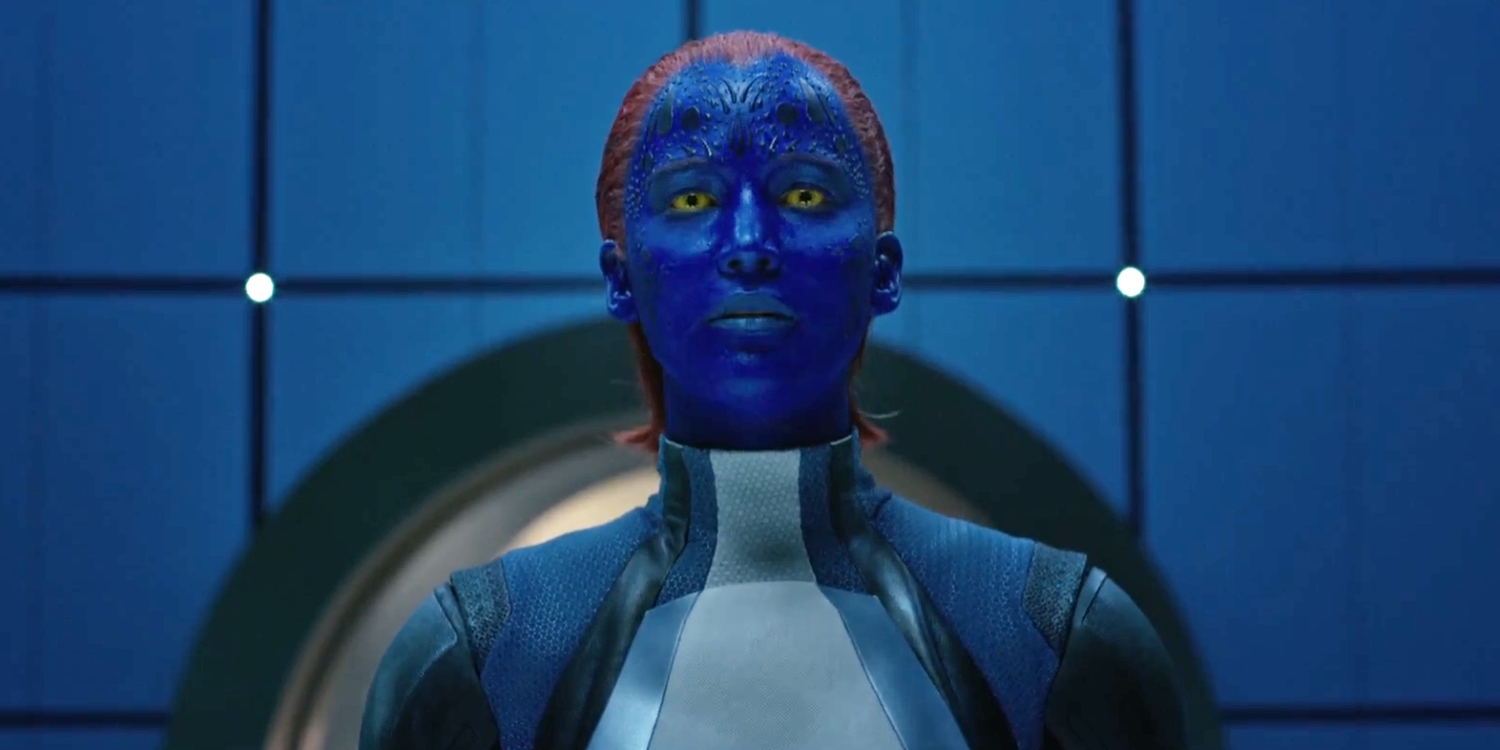 In addition to the comparatively high number of female mutants, Apocalypse stands out for treating a female superhero as a role model and cultural icon — epithets usually reserved for male heroes. The icon in question is Mystique. In X-Men: Days of Future Past, Mystique had a tremendous showdown with Magneto outside of The White House. Thousands of people across the world witnessed her “saving the president,” leading to the scrapping of the Sentinel program (robots designed to save humanity from mutants). In X-Men: Apocalypse she’s seen as a hero and role model to mutants everywhere, having been lionized by her actions in the previous film.

One of Mystique’s fans is a young Storm (Alexandra Shipp), who has a poster of Mystique on her wall and declares, “Mystique is a hero.” Mystique’s long-time friend Hank/Beast (Nicholas Hoult) reinforces her hero status, telling her that students at Xavier’s School for Gifted Youngsters “look up” to her. She is a cultural icon within the mutant community, something that none of the male mutants have accomplished. However, Mystique doesn’t revel in this newfound fame. Instead she disguises herself, travelling around the world saving other mutants under incognito personas. One of the mutants she saves is Nightcrawler (Kodi Smit-McPhee), who later plays a crucial role in the final fight against Apocalypse (Oscar Isaac). With the help of Quicksilver (Evan Peters), Mystique manages to convince Magneto to stop helping Apocalypse destroy the world.

Apocalypse recruits a number of mutants, both male and female, to cleanse the human race and take over the world. His indiscriminate selection of mutants proves that the X-Men universe doesn’t pigeonhole women as being either good or evil. Born 5000 years ago, Apocalypse is one of the first-ever mutants. Having laid dormant for thousands of years, he is accidentally awoken by Moira MacTaggert (Rose Byrne), a CIA agent who specializes in human genetic mutation. He has total control over his body’s molecules, enabling him to alter his form to whatever he wishes. Apocalypse has changed bodies several times by “collecting” the powers of other mutants. Telepathy, telekinesis and regeneration are among his collected powers, rendering him virtually immortal. After waking up in the present day, Apocalypse begins travelling around the world to recruit mutants.

Two of these recruits are Storm (Alexandra Shipp) and Psylocke (Olivia Munn). Again, this marks X-Men’s nongendered approach to choosing its villains. Although they’re not leading roles, both Storm and Psylocke demonstrate amazing power and prove that they’re forces to be reckoned with. Together they form half of Apocalypse’s doomsday squad, the four horsemen. 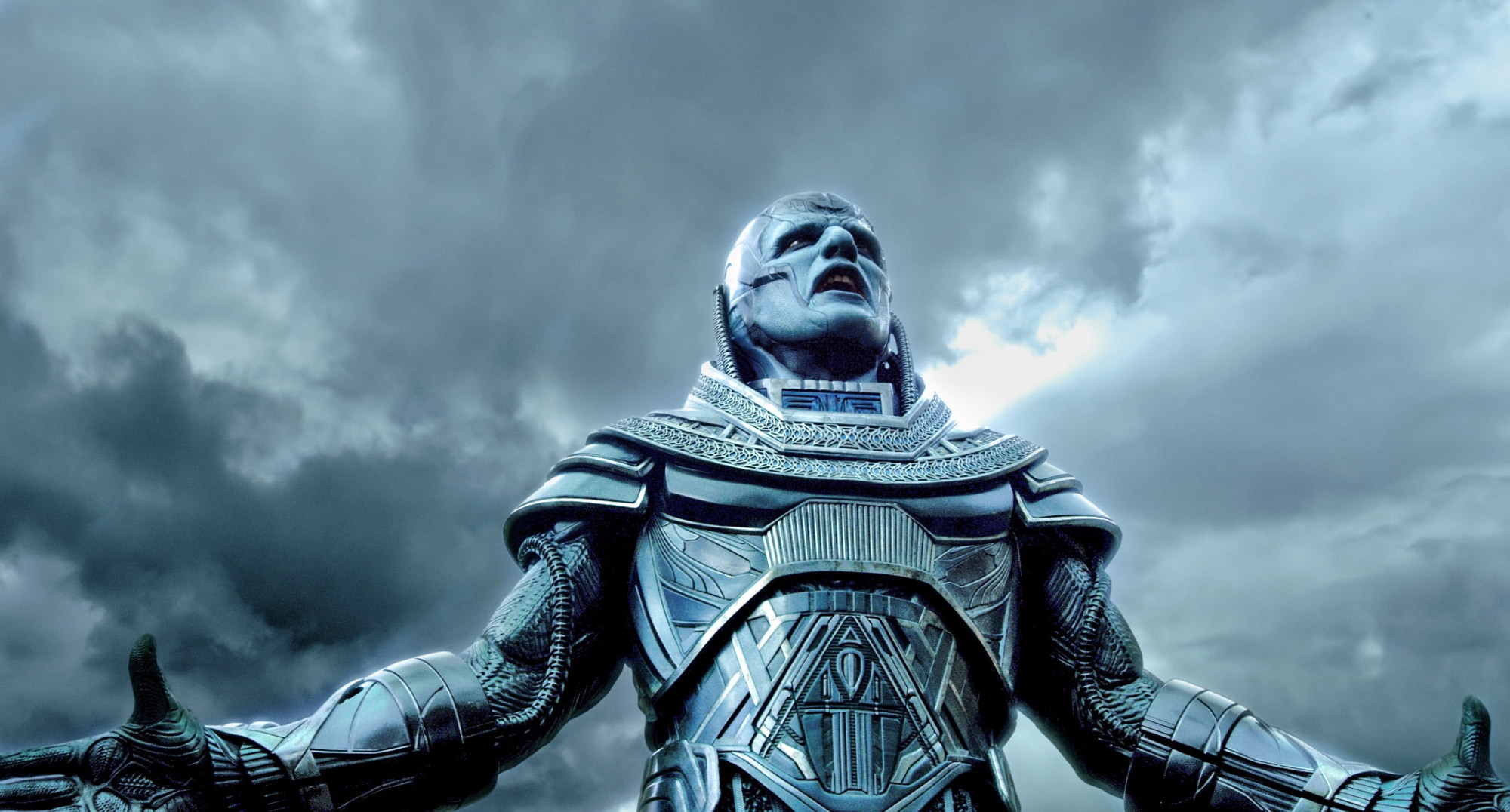 X-Men: Apocalypse also introduces a young Jean Grey, one of the franchise’s most powerful and complex characters. She’s even more powerful than Professor X, although she doesn’t know it yet. More importantly, Jean is stronger than Apocalypse and central to his destruction. Her powers include telepathy, telekinesis, mind control and the ability to warp reality and control other beings’ molecules. These powers are enhanced when she’s possessed by a cosmic being known as Phoenix. While she possesses many abilities, the young Grey is scared of her immense telekinetic power and spends most of the movie trying to gain control over them and not set things on fire.

Even though Jean is overwhelmed by her abilities, she is still powerful enough to defeat Apocalypse. After a long battle, it looks as though Cyclops, Quicksilver, Mystique and Nightcrawler’s combined powers are not enough to win, even when they’re joined by Magneto and Storm. With a small nudge from a dying Professor X, Jean finds her power and with a huge burst of fire destroys Apocalypse, saving the professor, the X-Men, and the world. In a genre that’s so vastly dominated by men, it’s refreshing to see a woman save the day. Furthermore, her heroism doesn’t seem like a gesture of tokenism or an opportunity for the franchise to check off a “female hero” box. Rather, Jean’s climactic defeat of the villain is founded on her immense ability and power. 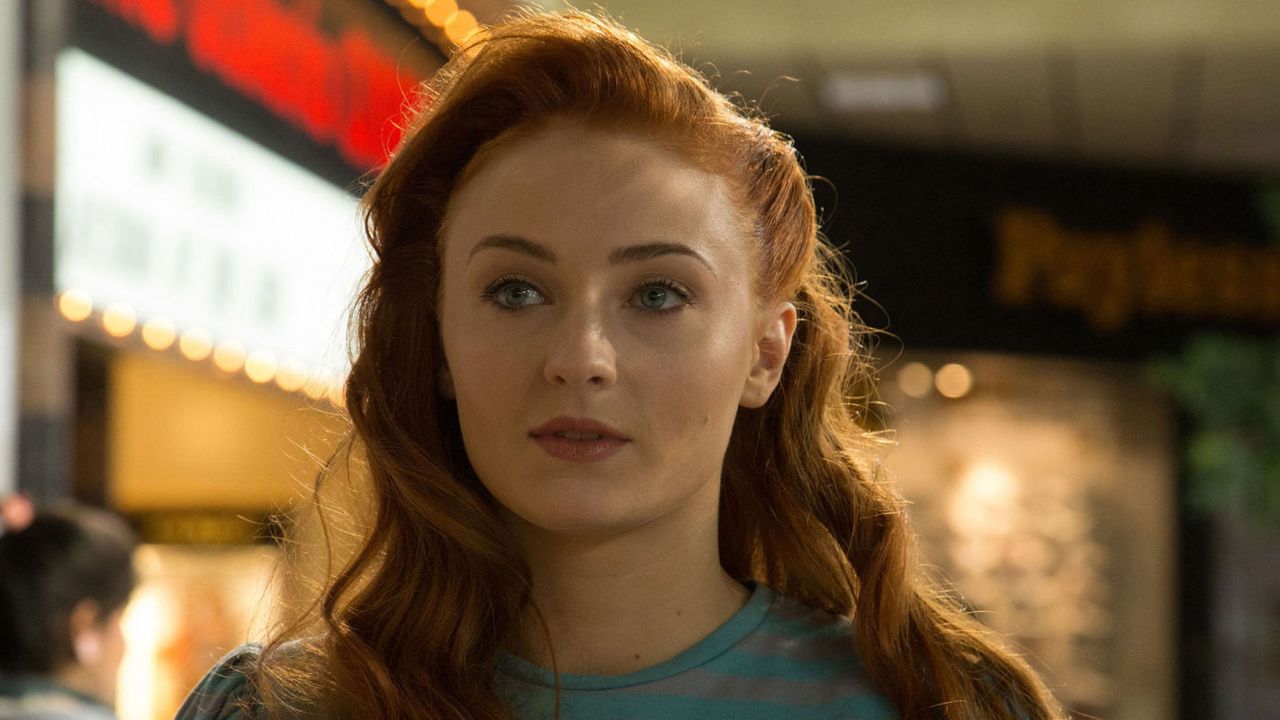 Sophie Turner as Jean Grey in in X-Men: Apocalypse (2016)

That said, Apocalypse is not without its flaws. Some of the female characters are not as multidimensional as others. Storm and Psylocke, for example, aren’t as fleshed out as Jean or Mystique. Though she may exude power and sass, Psylocke has very few lines in the film. She’s just a villain who shoots pink blades with her arms. Storm is given more depth than Psylocke. We know she idolizes Mystique and wants to embrace her powers. She also exhibits some character development when she decides to fight against Apocalypse and not with him, but her story isn’t explored much further than that. This appears to be a general writing rather than a gender issue, though, as the same goes for certain male mutants. Nightcrawler’s and Angel’s (Ben Hardy) backgrounds aren’t fully explained, save for a few vague comments tossed in now and then.

The best example of an underdeveloped female character is Jubilee (Lana Condor). Prominent in the comic books, she has been repeatedly overlooked in the film franchise. This time is no different. She’s not seen using her powers on screen and only has a few lines, as they were deleted from the final cut. Critics have been quick to compare this to “the Rogue cut” in X Men: Days of Future Past, in which a 17-minute subplot involving Rogue was cut from the theatrical release. The subplot was only available on the extended cut on DVD. Director Bryan Singer was happy to justify his decision to cut Jubilee’s scenes from the movie, saying, “There will be nothing like the Rogue Cut or anything like that. I’m not a big fan of director’s cuts or extended editions, I never have been. In the case of Apocalypse, I removed what would be considered a conventional amount from the movie to protect what we call the collective experience of the feature theatrically.” 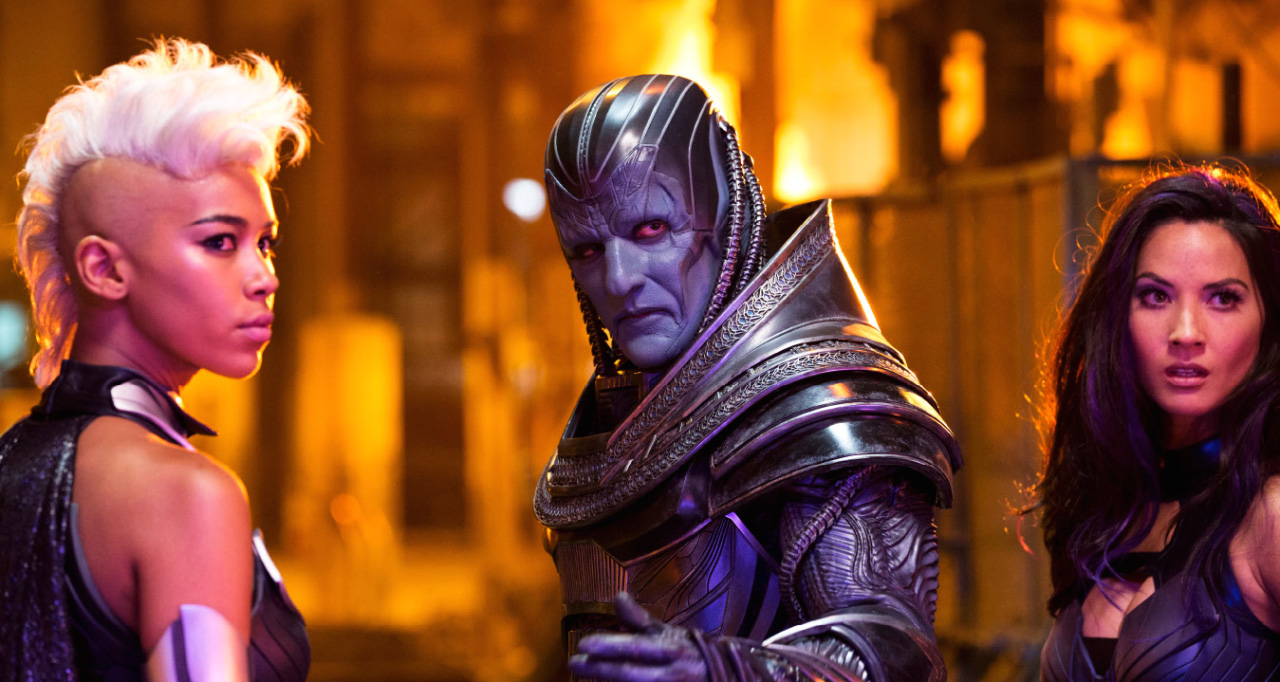 Alexandra Shipp as Storm, Oscar Isaac as Apocalypse and Olivia Munn as Psylocke in X-Men: Apocalypse (2016)

Despite these minor issues, X-Men is miles ahead of other superhero franchises in its portrayal of female heroes. Women have always played an integral role in the X-Men movies, but they are especially crucial and well-written in Apocalypse. Is it because the producers know that big names like Jennifer Lawrence and Game of Thrones (2011 - ) star Sophie Turner will attract audiences? It’s possible. There is always more work to be done to balance the presence of men and women on screen, and throwing in a couple of big names won’t suffice. X-Men: Apocalypse not only succeeds at navigating this balancing act, but it also writes female characters who are complex, empowered, capable heroes.

The film thrusts two extremely powerful women right to the center of the story, where they save and destroy the two most powerful men on Earth. If that’s not a surefire sign of the power of female heroes, then what is?