How have The Marx Brothers, particularly with “A Night at the Opera,” influenced future comedians? 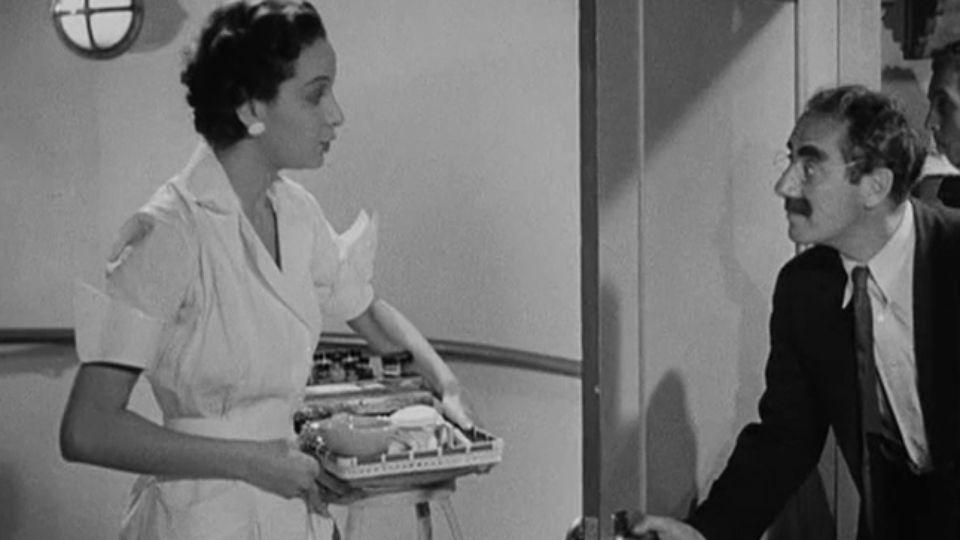 Groucho Marx has an unruffled nature. No matter what is happening, he’s Groucho. The character is the character. A Night at the Opera (1935) contains a few of the Marx Brothers’ most iconic comedic gags, many of which are facilitated by Groucho. The crowded stateroom scene is perhaps the most recognizable, in which Groucho’s character Otis Driftwood cordially invites person after person into his cabin, despite the fact a large steamer trunk sits in the middle of the room occupying almost all the space. The character of Driftwood is fully convincing in his absurdity—there is no doubt that he would invite endless streams of people into the crowded room and think nothing of the madness; madness is his normal. The scene is quintessential Marx Brothers humor and is one of the most famous comedic moments in cinema history. Anyone studying the Marx Brothers’ influence on later generations of comedians can certainly point to this scene as one of the most prominent examples.

The gag not only works on a physical level as people pile over one another in the room, but before the craziness commences, Groucho stands outside the room giving a ridiculously long lunch order to a waiter. Harpo and Chico, from inside the room, keep adding hard boiled eggs to the request. The zany delivery and precise construction of the scene shows the value in the brothers’ new calculated comedy started by A Night at the Opera, and when the waiters inevitably return with trays full of food, their presence in the packed stateroom adds to the hilarity.

An eighth-season episode of Seinfeld (1989) titled “The Pothole” contained a parody of the gag, wherein the main cast members pile into a janitor’s closet as they await a Chinese food delivery. Animaniacs (1993) episode “Hercule Yakko” also parodied the bit, as well as an episode of The Suite Life of Zack & Cody (2005). Even musicians Sting and Cyndi Lauper have parodied the stateroom scene in their music videos, “All This Time” and “Girls Just Want to Have Fun,” respectively.

A Night at the Opera is also famous for its contract-tearing scene, where Driftwood (Groucho) and Fiorello (Chico) tear up a contract and eliminate all the parts they don’t like.

The scene concludes with Fiorello’s exclamation, “There is no Sanity Claus!” The joke is a play on Santa Claus and became a piece of quotable dialogue from the film.

A Night at the Opera has a unique and conflicted legacy within the Marx Brothers’ filmography. It marked their transition from Paramount to MGM, which changed the nature of their films from lawless comedy raucousness to controlled, less-jokes-with-more-punch production. It is also widely contested as to whether or not it is their best work. Some Marx Brothers fans consider anything post-Paramount to be something less than Marx—others maintain A Night at the Opera is their crowning achievement before a career downfall from which they never recovered.

Roger Ebert essentially considered it their second best, topped only by Duck Soup in 1933. Daniel Griffin said, “A Night at the Opera is funny, but this is NOT the Marx Brothers, and their earlier style is so sorely missed that the film falls flat. The main problem with A Night at the Opera is the obvious lack of the Marx Brothers’ trademark anarchy. What distinguished them in their Paramount films from all other comedians was their thumb-biting indictment of society.”

Both agree, however, the film contains a number of iconic Marx scenes and the brothers’ overall catalog of comedic genius contributed to the landscape of comedy that followed.

The Marx Brothers’ legacy has crossed generations and types of performance. The Beatles referenced The Marx Brothers’ irreverent early chaotic style throughout their films, particularly A Hard Day’s Night (1964). Woody Allen has cited Groucho as one of his chief inspirations, directly mentioning the brothers in films like Annie Hall (1977). His 1989 picture Everyone Says I Love You even took its name from a Marx Brothers song found in their early Horse Feathers (1932) picture. Monty Python is regularly compared to the brothers as well, with John Cleese admitting Groucho was a personal hero. One can easily view Monty Python as a recurrence of The Marx Brothers, set in a different generation a few decades later. 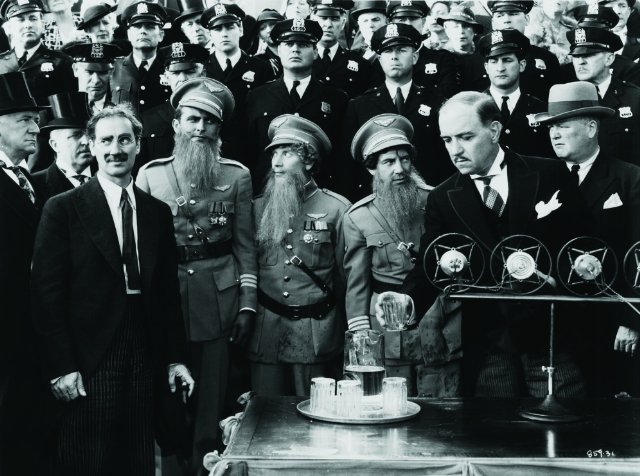 The Marx Brothers employed intelligent, character-driven humor. Such comedic styling tends to have a timelessness to it. Groucho’s laser vocabulary, Harpo’s scandalous innocence; these things resonate on a personal level despite time and context. Much of their humor was also founded on their immigrant status and a mockery of the elite. With the makeup of the American population as it is, most people have some immigrant identity in their history, and calling out the buffoonishness of the elite is always enjoyed by the non-1%. Storify says, “Between Groucho’s witty dialogue, Harpo’s physical communication, and Chico’s innocent criminal-like charm, they created comedy not only for entertainment but deliver a message about the effects it can have on people in a rich, sophisticated world and mock everyday stereotypes of different ethnicities… Since we’re familiar with different forms of authority and being considered outsiders from time to time, we can relate to the plots and jokes in which The Marx Brothers establish their humor and that makes us laugh.”

Super-successful modern comedian Judd Apatow has cited Duck Soup as the first comedy film that really impacted him, becoming a huge Marx Brothers fan in his childhood. Groucho even became friends with Alice Cooper, late in Groucho’s life and early in Cooper’s.

The brand of slapstick comedy the Marx Brothers embodied makes its way into modern comedy everywhere from Family Guy (1999) to Modern Family (2009), where the everyday meets the ridiculous in the same deadpan manner the Marx Brothers conveyed nearly a century ago.