How does Charlie Chaplin use contrasts to drive the narrative in “The Kid”?

Quick Answer: Though Charlie Chaplin’s The Kid is, at its core, a slapstick comedy, it is also imbued with sentimentality and depth. Much of the story’s depth comes by way of contrasts; many of the experiences and encounters in the Little Tramp’s life are reciprocal sequences of doing and undoing, giving and taking, creating and destroying. In addition to driving the narrative, these recurring dichotomies allow The Kid to be viewed from different perspectives, thus ensuring its timeless appeal.

Chaplin’s first full-length film is a lesson in golden-age slapstick humor. It features his Little Tramp character dodging falling garbage, engaging in fistfights with hilariously over-stuffed actors and performing the goofy comedy for which he was so well-known. But below the facade of silly entertainment, The Kid (1921) is rich with sentimentality. Much of the story’s depth comes by way of contrasts; many of the experiences and encounters in the Little Tramp’s life are sequences of doing and undoing, giving and taking. The film itself is biographical. Chaplin lost a child, so he made The Kid. He grew up poor, and became rich for playing a poor character. Though The Kid maintains a buffoonish tone, its narrative employs a rhythm of comparison that, through its subtext, tells a much deeper tale.

An image of Christ carrying a cross appears near the introduction of the woman and her child, with a title card indicating motherhood was her only sin. Stepping from a charity hospital with her baby in tow, this ‘virginal’ mother is alone. An artist, the apparent father, makes only one appearance. After accidentally knocking a photo of the mother into the fireplace, he decides the photo is not worth saving and lets the rest burn. Eventually the woman abandons the child for Chaplin’s Little Tramp to find. Once the woman becomes a famous performer, she gives to the poor and reminisces about the baby she gave away. Meanwhile, the child has grown up with the Tramp as his father and protector, the two living in harmony despite their meager possessions. Chaplin continues the religious theme by showing his characters frequently praying, though it clearly does them little good. Later, the mother quotes the Bible to the Tramp and a bully, only to have the Tramp beat the bully with a brick. Chaplin’s religious allegory is intentionally confused, as if he only wants it in order to rebel against it. 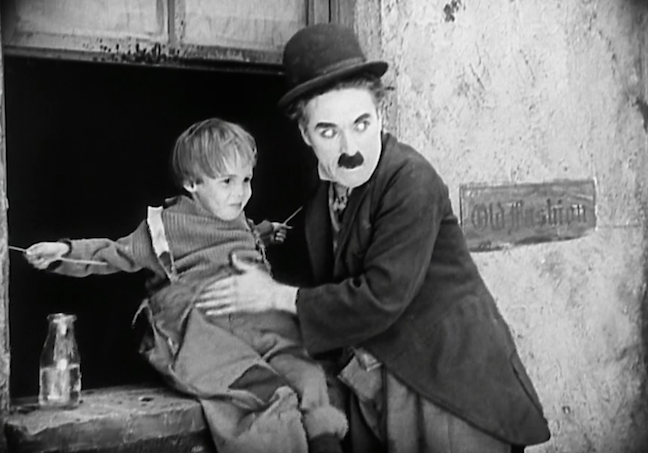 The Kid’s story is one of reciprocal creation and destruction. The artist (father) lets the mother’s picture burn as he stands working on a piece of art. The Kid goes around breaking people’s windows so The Tramp can fix them, providing their family with income. The Tramp makes breakfast, then the Kid makes breakfast. The Kid puts a quarter in the gas machine and gets it right back. The mother convinces The Tramp to not fight the bully, then he picks up a brick. The Tramp’s dream sequence is full of angels, then devils. The flophouse owner initially doesn’t want The Kid in bed with The Tramp, then sees a reward offer in the paper and kidnaps him. The Tramp finally sees The Kid during the dream, and is shot dead when trying to fly away, returning to the paradise of reality. Even visual cues like The Tramp’s house number “69” is an inversion of itself.

Each major player in the story ends up the opposite of how they started. The woman goes from being an unwed, lonely parent to a beloved star. The Kid is abandoned to be rescued, then eventually taken back in by his original mother. The Tramp was alone and poor, and winds up welcome in the home of the star. 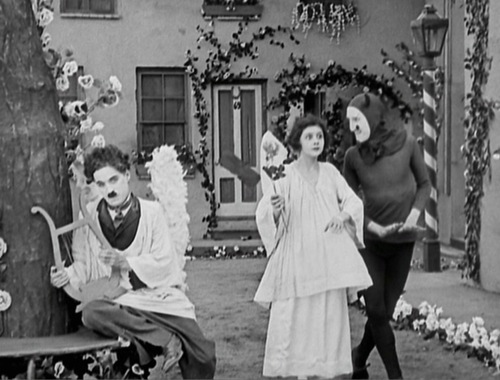 The dream sequence in The Kid

The dream sequence is The Kid’s most contested point, as many feel it is too detached in tone from the rest of the film. It is full of oddities that don’t have a place anywhere else in the picture. That being said, the dream sequence successfully plays into the recurring theme of the film. Everything is going peachy until the devils show up. The Tramp sees a pretty young girl—“Vamp him!” reads a title card—and she kisses The Tramp. Her boyfriend stands idly by, shaking The Tramp’s hand until a devil whispers “jealousy” in his ear. Suddenly, they fight. What starts out one way ends another, keeping with the trend.

The Kid is arguably two different films: the whimsical silent picture about a goofy guy raising a child, and the deeper examination of desire, changes, and sentimentality. The title card advertises the film as a story with a smile and a tear, setting up the theme of polarity and the exploration of human tragedy and comedy. Chaplin’s brilliance allows the film to be viewed from different perspectives depending on the viewer, which lends itself to the timeless appeal of the almost century-old film.