Has Disney really recycled animations in their feature films?

Quick Answer: When we say “recycled,” we mean that the Disney animators drew a particular sequence in the same way multiple times. This is a practice which definitely happened, but it wasn’t typically to save time or money or creative thinking. Instead, it was a case of knowing something worked well and sticking with it, often ushered by Disney animator Woolie Reitherman.

Over the past few years, the internet has been abuzz with talk that Disney recycled various animations in its popular film classics, allegedly to save time or resources when deadlines were crunched. A very interesting video illustrates these duplications by juxtaposing scenes from one Disney animated classic against another, revealing character movements which parlay seamlessly as if swapped out or traced over between films.

The thing is, these are old movies, and each of them was created with true hand-drawn animation. Recycling hand-drawn animation for time-saving reasons, at least in the way we typically think of recycling something, doesn’t really make sense. It’s not as if these character movements were saved somewhere and an animator dropped a different skin onto the rendering, as could be possible with modern animation. Each cell still had to be drawn and painted the old-fashioned way, whether it was “traced” and re-animated with a new character or not. So from a time perspective, the only time that would have been saved in doing this is the time spent imagining new scene staging, not the grueling hours of laborious hand-drawing animations.

Cartoonist Jim MacQuarrie asked some of his old Disney buddies about the reason why these classic Disney animations are strikingly similar to one another, and most of them provided him with a similar answer: Wolfgang “Woolie” Reitherman.

Reitherman directed all Disney animated pictures between Walt Disney’s death and his own retirement. not limited to 101 Dalmations (1961), The Jungle Book (1967), Robin Hood (1973) and The AristoCats (1970).

Reitherman is one of Disney’s “Nine Old Men,” a term used by Walt Disney himself to refer to the company’s core animators (and for many, directors) who created the company’s most significant early pictures. Many current Disney animators can trace apprenticeship back to these men. They won countless awards and all strove to refine the “12 principles of animation.”

One could say that their 12 components result in “something that works,” as the Disney formula has been effective for almost 80 years now. 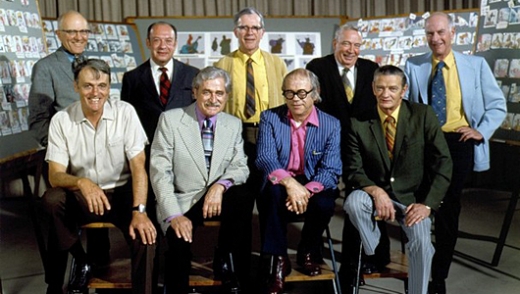 To that end, Woolie Reitherman believed that if something works, stick with it. He played it safe when it came to animation, and if a particular sequence worked in a past film, he was bound to repeat it in a later one. That was his signature, and if nothing else, makes for fun Easter eggs today. Granted, it seems a little lazy in hindsight. Animation is an unrestricted playground for the imagination to come to life without the confines of special effects budgets and without the limitations of the practical world. Duplicating a ballroom dance or the googly eyed head-shaking of an animated figure is, surely, a bit odd. Would these movies really have been any less successful if characters weren’t moving with the same mannerisms as previous films? That certainly can’t be where their appeal lives.

Redrawing an existing sequence isn’t easier or less time-consuming than drawing a new one, and it’s obviously less innovative. Recycling animated sequences wasn’t Disney animation policy, it was were simply Reitherman operating under a classic “if it ain’t broke, don’t fix it” mentality, as odd as the logic might be in his medium.