Why was “Cabaret” called “a musical for people who don’t care for musicals”?

In his Hollywood Reporter review, Garry Giddins wrote, “Cabaret is a stunning entertainment, an exuberant marriage of talent and intelligence. Conceptually, it is a musical that will even please people who don’t particularly care for musicals.”

Stephen Tropiano furthered that quotation in his book Cabaret: Music on Film Series, saying, “With the exception of the horror film, no other genre polarizes Hollywood audiences more than the musical. Musicals are like horror movies: you either love them or hate them.”

Musicals prior to 1972 were full of whimsy and cheer, rarely used to head-on tackle lofty political or cultural ideas, and were almost never dark. The ones that did mock the seriousness of life did so through comedy, like Mel Brooks and The Producers in 1967. Bob Fosse broke those conventions and created Cabaret (1972), a strange and extraordinary musical with art house sensibilities and heavy thematic content drawn from the European traditions that had inspired New Hollywood filmmaking. Its musical numbers, though prominent and flamboyant, are presented in a way that confines them to the stage of the cabaret and eliminates the often strangely-received way musical characters typically burst into song for no apparent reason; a turn-off to non-fans of the genre. 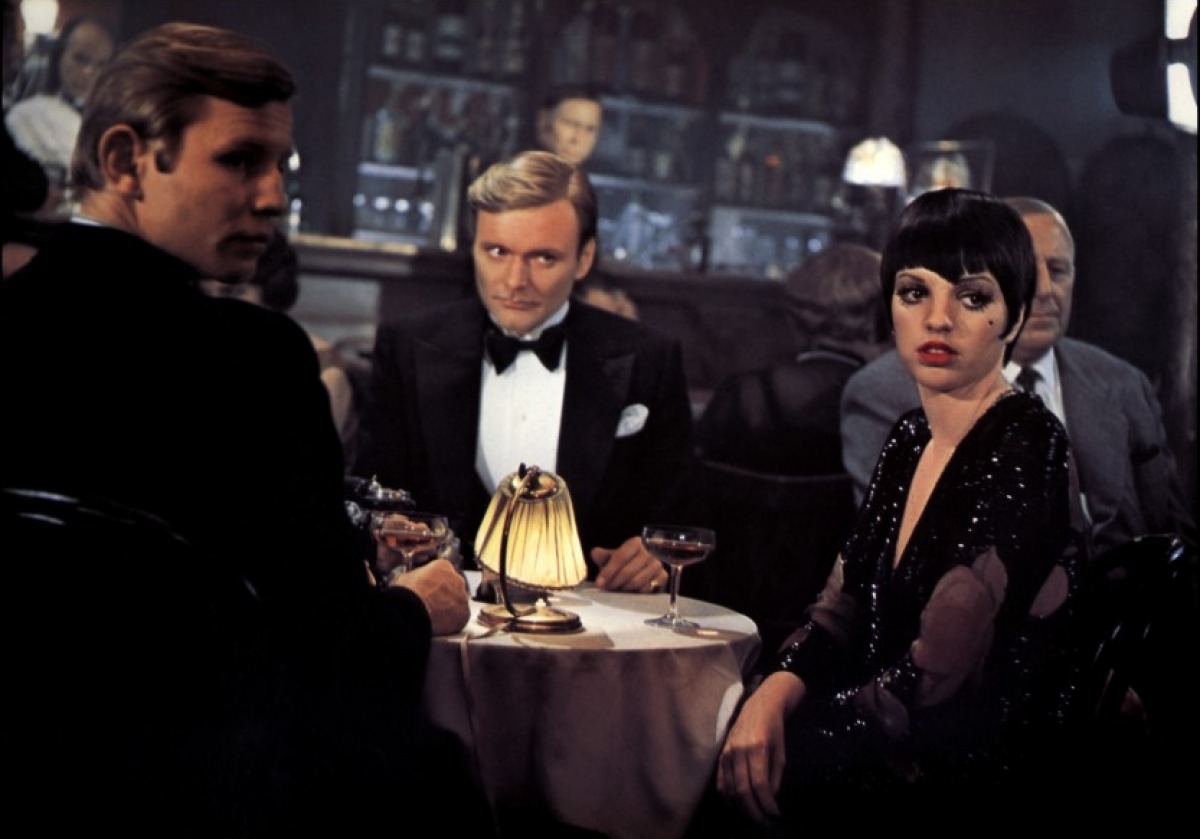 The Huffington Post writes, “At the time of its 1972 release, Cabaret shattered the saccharine reputation of the movie musical with its edgy take on anti-Semitism, Nazism, abortion and even repressed homosexuality.” Though it did all this within the scope of a not-uncommon “boy meets girl” story, it was a far cry from the likes of Gene Kelly and Leslie Caron.

Cabaret was one of the first major musicals that didn’t cater to a family audience, initially receiving an X rating before modifying itself to R. The film was largely shot on location in Germany as opposed to studio sets, which added to the film’s authenticity and added another experimental element to musical filmmaking. This realism appealed to people who found the obviousness of set-driven Hollywood musicals to be overly phony, as its environment was unique.

Cabaret’s subject material was envelope-pushing for 1972. The horrifying character of the Kit Kat Klub’s unnamed emcee was one of the film’s biggest draws, and won relatively unknown Joel Grey an Academy Award for the job. At a NYC press event in 2013, he recalled, “I made a whole life for myself because there was no text, and there was really no description of who the Emcee was. I was terrified, because I thought it was going to be a musical comedy, just four or five numbers … [but] I wanted it to be really horrifying.” Grey prepared for the role by studying German Expressionist paintings and listening to music of the Weimar era, two elements that greatly contributed to the environment in which the film is set.

The way story, song, and dance—the three chief elements in musical construction—are integrated under Fosse’s design, coupled with its dark and adult subject matter, makes watching Cabaret a different experience from most big musicals. Instead of a boisterous and fun production, it shows the dissolve of a seemingly normal society under the influence of tyrannical power. Even its love story was unconventional, incorporating a promiscuous woman and two bisexual males in a love triangle of unprecedented complexity.

Cabaret’s score, setting, characters, performances, directing, choreography, and atmosphere harmonized into a musical experience that doesn’t always feel like a musical, but a story about people and society with moments of music driving home the themes. It makes sense as a musical suitable for people who don’t enjoy the cheerful levity of traditional musicals, and its lasting appeal across the decades is a testament to its ability to reach broad audiences.