How does the thematic content of “Cabaret” maintain the film’s cultural relevance today?

Bob Fosse’s musical Cabaret (1972) was nominated for ten Academy Awards and won eight of them, losing a couple to The Godfather (1972). Cabaret was an unusual musical in composition, content, and structure. Deeply about politics and survival insetad of happiness and optimism, it wrecked clichés and reinvented the musical genre, while making mega cinematic stars out of Fosse and Liza Minnelli.

The story is set in 1931 Germany, when the German Weimar Republic was on the decline and the rise of Nazism was in its early stages. The focus is on flamboyant American Sally Bowles (Minnelli), a performer at the Kit Kat Club cabaret, and her relationship with her sexually uncertain English neighbor Brian (Michael York). Brian is an academic staying in Germany to teach English and study language, his rigidity an obvious foil for Minnelli’s opposing, yet intriguing, lifestyle. 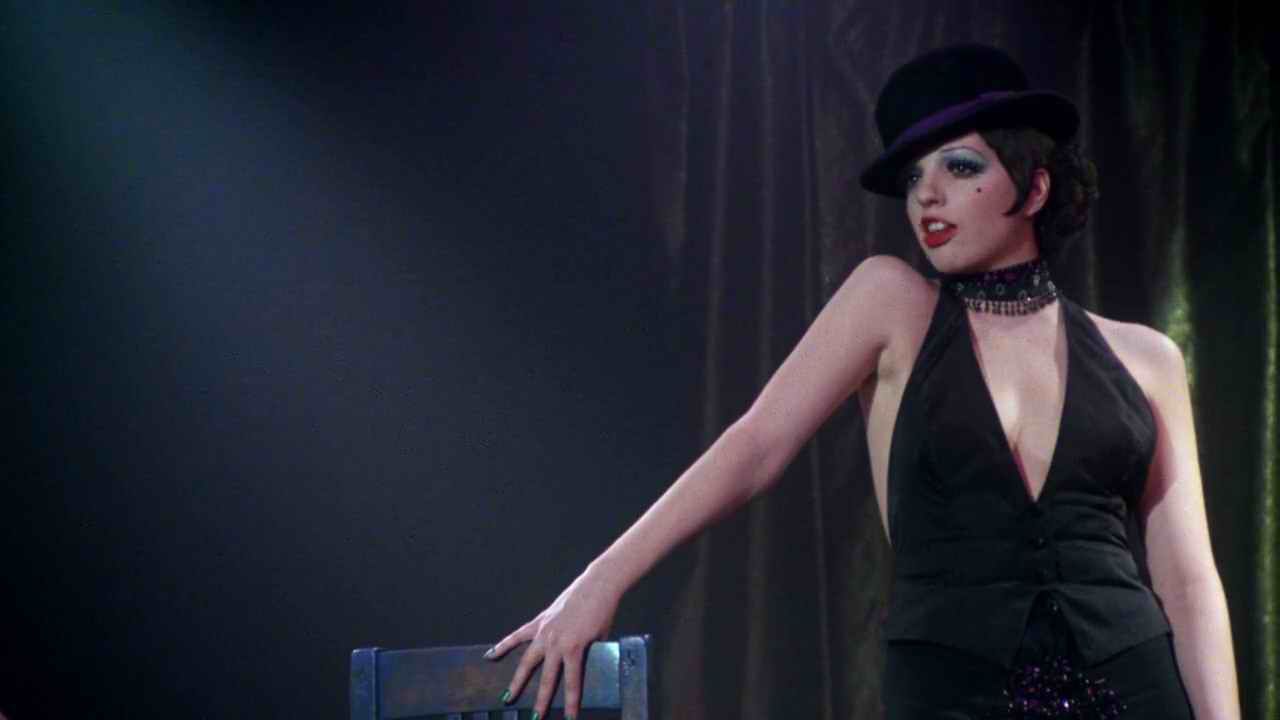 Weaving in and out of the film is the Kit Kat Klub’s unnamed emcee played by Joel Grey, who leads activities at the club as well as serving as the thematic narrator for the film’s events. He is the simultaneous symbol of the unorthodox liberal lifestyle Sally Bowles embodies, as well as a reflection of the growing nemesis of the Nazi party in the country. Cabarets were often used to satirize and mock politics and popular culture, and Grey’s emcee takes that to the max. His thinly-disguised songs (such as “If You Could See Her”) show how quickly the formerly sensible German populus was turning towards anti-Semitism with little reason beyond patriotism. His songs highlight the transition of a socially tolerant people to those driven by radical fanaticism, and does it through deservedly graphic means. “She’s clever; she’s smart; she reads music,” the emcee’s lyrics say. “If you could see her through my eyes, she wouldn’t look Jewish at all!” The line had been removed from the stage version of the show, but Fosse reinstated it for the film as its blunt impact drives home themes in a bold way.

HitFlix writes, “One of the interesting aspects of the adaptation was the decision to confine the musical numbers to the diegetic environment of the club rather than having the characters spontaneously express themselves in song as the [original stage] musical does. Fosse has a distinct and remarkable editorial sense and often uses the inherently surreal nature of the stage (including the backstage environment) as a metaphor for both human nature and what is happening in the larger text. His choices in the film were bold and dynamic and account for a large measure of the reason the work still feels relevant.”

The way Cabaret addresses Nazism is through subtlety and inference, which allows us to easily compare the themes against today’s political issues.

The first half of the picture sees people mocking Nazis, kicking them out of clubs, laughing at them in the streets, and generally disregarding their presence. By the end of the film, culminating in the forthright and self-congratulatory anthem “Tomorrow Belongs to Me” sung in a beer garden by a young Nazi, it is clear Nazis are not a harmless gang to be “easily controlled” as one character earlier implies. The crowd listening to the Nazi’s song seems to agree with his message. A relaxing drink turns into the witness of something supremely sinister—the film’s darkest moment in one of its brightest settings. This is the only song sung outside the walls of the cabaret.

The final shots of the Kit Kat Klub reveal Nazi presence is growing as tan uniforms fill the seats. Out of context, the film’s titular number sounds like one of positivity and cheer, when the reality is anything but, evidenced by the blurry, Nazi-filled audience to which Sally performs. The song is sung through fear and sorrow.

HitFlix continues, “Take a look at the ‘Tomorrow Belongs to Me’ scene for a taste of Fosse’s ability to express more with the right song and shot selection than 10 pages of dialogue would yield. And what is fascinating is how salient the themes present in Cabaret feel in today’s world.” 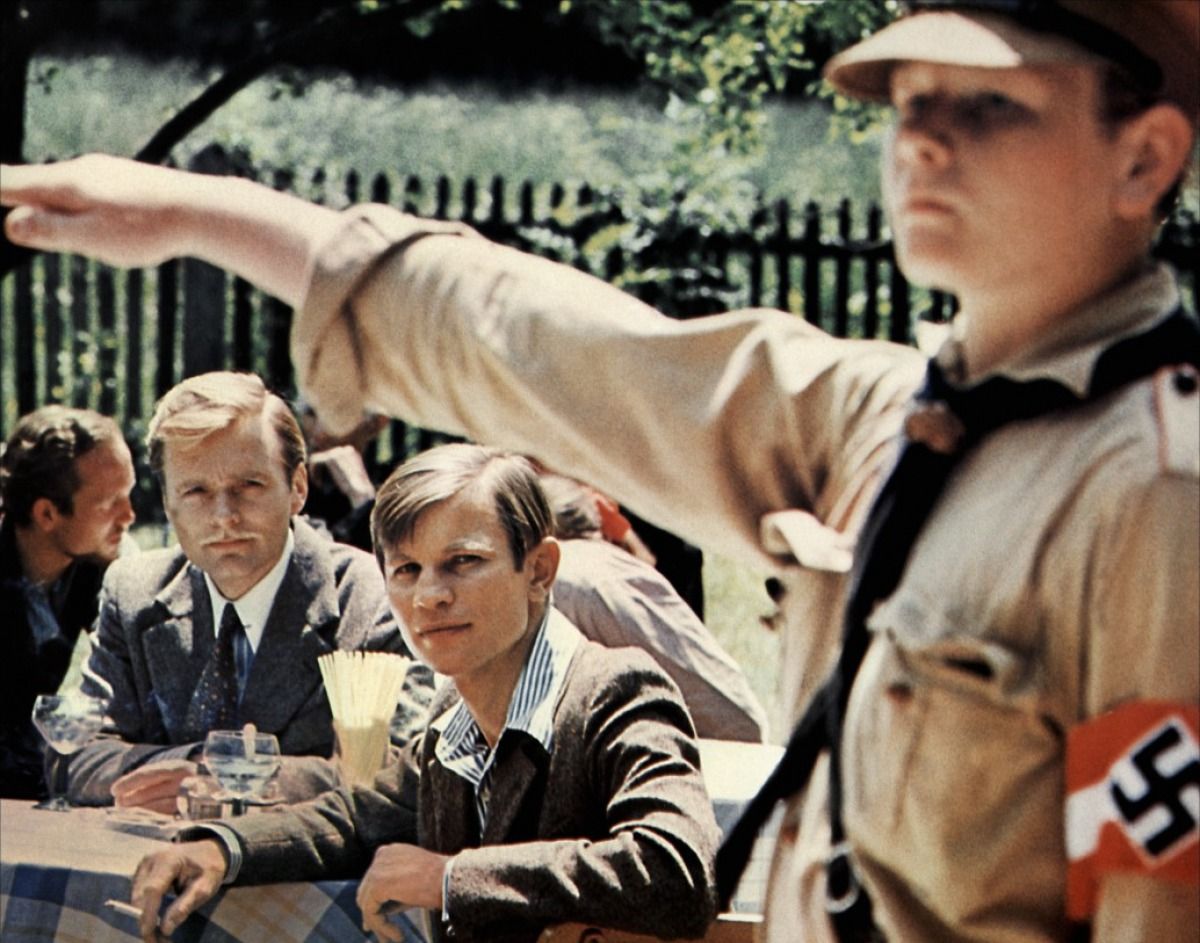 Sally shields herself from the realities of the world around her. Her character’s confidence and swagger are encouraging, but we’re to identify in her the dangers of pretending like problems don’t exist. New Line Theatre writes, “The singer Sally Bowles represents the people who kept their eyes shut to changes in the world around them, and the novelist represents the new (perhaps naïve) breed of American activist who could no longer sit by and watch the government ignore the will of the people. Today, as activism at both ends of the political spectrum has experienced a renaissance in America, Cabaret as a cautionary morality play has tremendous resonance.”

Cabaret addresses racism and political fanaticism in great detail. These are two topical issues that are far from irrelevant in today’s world, and parallels can easily be drawn between the film’s material and modern life. One analyist writes, “The story of the Nazis’ rise to power is more than just a narrative about authority or authority figures. It wasn’t just about Hitler garnering the allegiance of the German public to follow him, or at least not oppose him. It had a cultural dimension too. This is what Cabaret stresses, and why it’s relevant to us today in 2015. In the United States we have, in recent decades and especially since the turn of the century, seen a shift in cultural attitudes toward inclusiveness and progressive values. We see that with the legalization of marriage equality, the election of an African-American President, and increased attention to issues of social and economic stratification. But we’ve also seen significant backlash to these changes, with xenophobia, racist or sexist rhetoric, and the increasing organization–especially through the Internet–among adherents of reactionary and right-wing ideologies. Weimar Germany’s cultural inclusiveness and political liberalism mobilized the forces of reaction to these values, which manifested themselves, certainly not inevitably, in popular support for the Nazi regime. This is one of the subtexts that Cabaret plays with… Culturally and politically reactionary forces (which usually go together) often follow episodes of significant social change, especially in a progressive direction. Cabaret reminds us of this in ways both subtle and flashy.”

Cabaret has been adopted into the Library of Congress’s National Film Registry as a film with cultural and historical importance. Though it would be nice say its themes of world society have become outdated in the 40 years since its release and 80 years since its setting, reality proves otherwise. Cabaret remains relevant today because of its great performances and ever-excellent Bob Fosse direction and choreography, but also because of the thematic cultural negatives that our society unfortunately can’t seem to stop repeating.