Why is “Empire Strikes Back” considered the best of the original trilogy?

It’s always tricky calling something “the best.” Someone will always disagree. “The best” is never absolute—it’s a subjective and personal statement that, on its own, has no validity. Yet we all hotly believe certain things deserve the title and will defend our claims to the end.

In the original Star Wars trilogy, Episode V: The Empire Strikes Back (1980) is widely considered the “best” of the three pictures, from fans and critics alike. Roger Ebert cited it as such, saying Empire Strikes Back is more “thought-provoking” and noting “it is because of the emotions stirred in ‘Empire’ that the entire series takes on a mythic quality that resonates back to the first and ahead to the third. This is the heart.”

The first film, Star Wars (1977), later re-titled A New Hope, originally lacked the subtitle because it was expected to be a huge failure upon release. Its narrative comes across as something that was just the beginning of a larger picture, but the expectations were that the rest of the story would never get told. A New Hope has the makings of an epic story that suffers from being crunched into an assumed single film. It has exciting space action, the likes of which had never been seen, but it doesn’t provide the rich character growth or symbolic depth of the pictures that follow. It is a basic story of good versus evil. 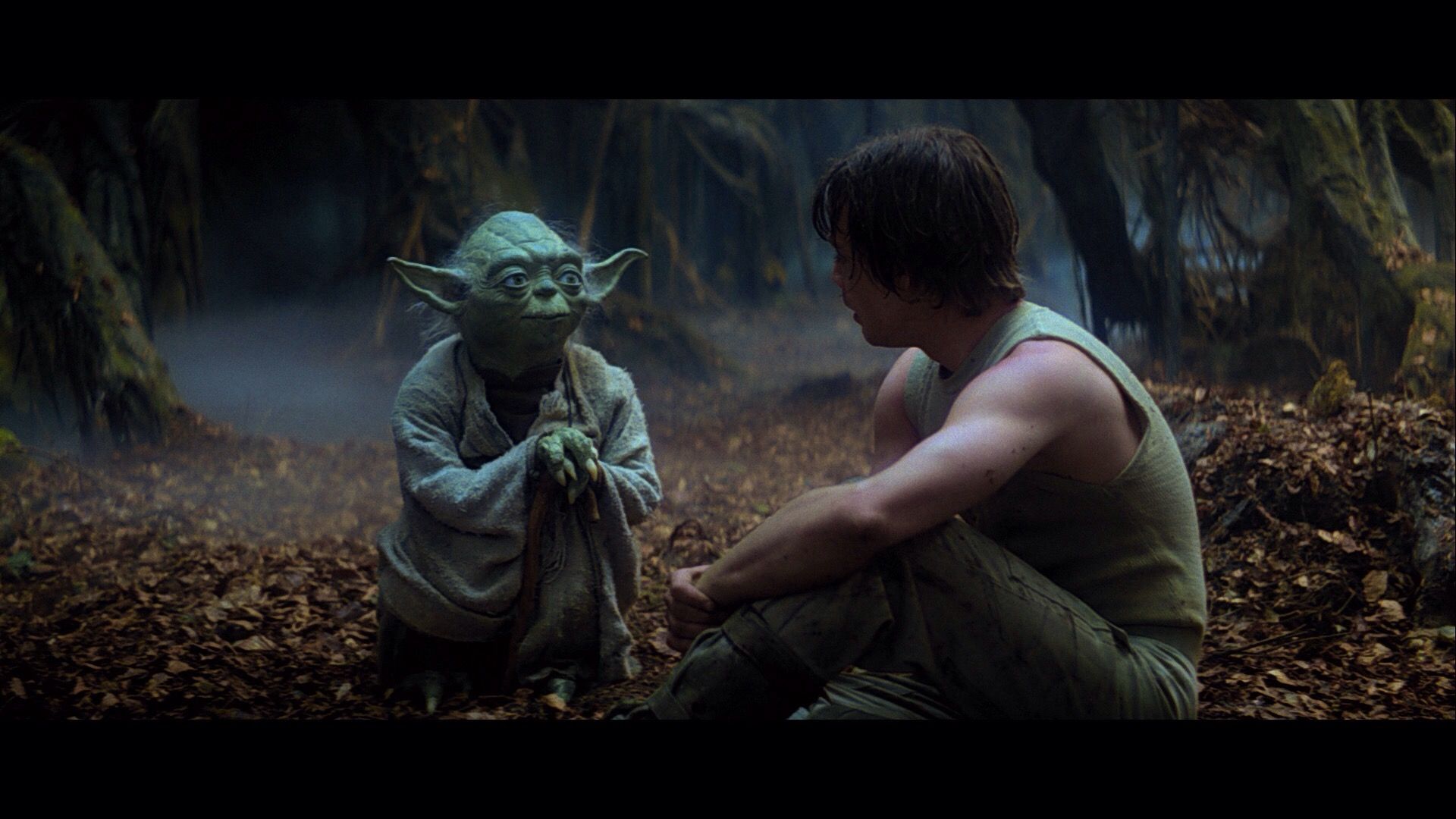 Examining A New Hope, we struggle to identify the protagonists and antagonists as individuals. Darth Vader is the villain, sure, but he doesn’t directly encounter the core hero. He takes down Obi-Wan (Alec Guinness) in a sub-plot and later senses Luke’s (Mark Hamill) presence, indirectly battling Luke in the TIE fighter squad. Leia (Carrie Fisher) undergoes almost no character growth, and the eventuality of Han Solo’s (Harrison Ford) character arc only slightly resonates in the first film. Overall A New Hope is an awkwardly paced film that shows uncertainty as to how much emphasis to place on certain people and plot points. The narrative motion is a linear action-to-action progression with limited scope.

The Empire Strikes Back fixes these issues and crafts a more complex narrative. Ebert was right in referring to it as “the heart” of the series, as it pumps new life into the material of its predecessor. Luke is identified as the undeniable hero of the saga. He is positioned in direct opposition to Vader, and Vader’s persistence in locating Luke and delivering him to the Emperor drives most of the narrative. Luke evolves into something well beyond where he started in A New Hope, and the trilogy distinguishes itself as his story. To that same end, the secondary characters in Empire become much more defined. The way they exist as support for Luke’s quest become clear, and we’re able to identify with them on a personal level. 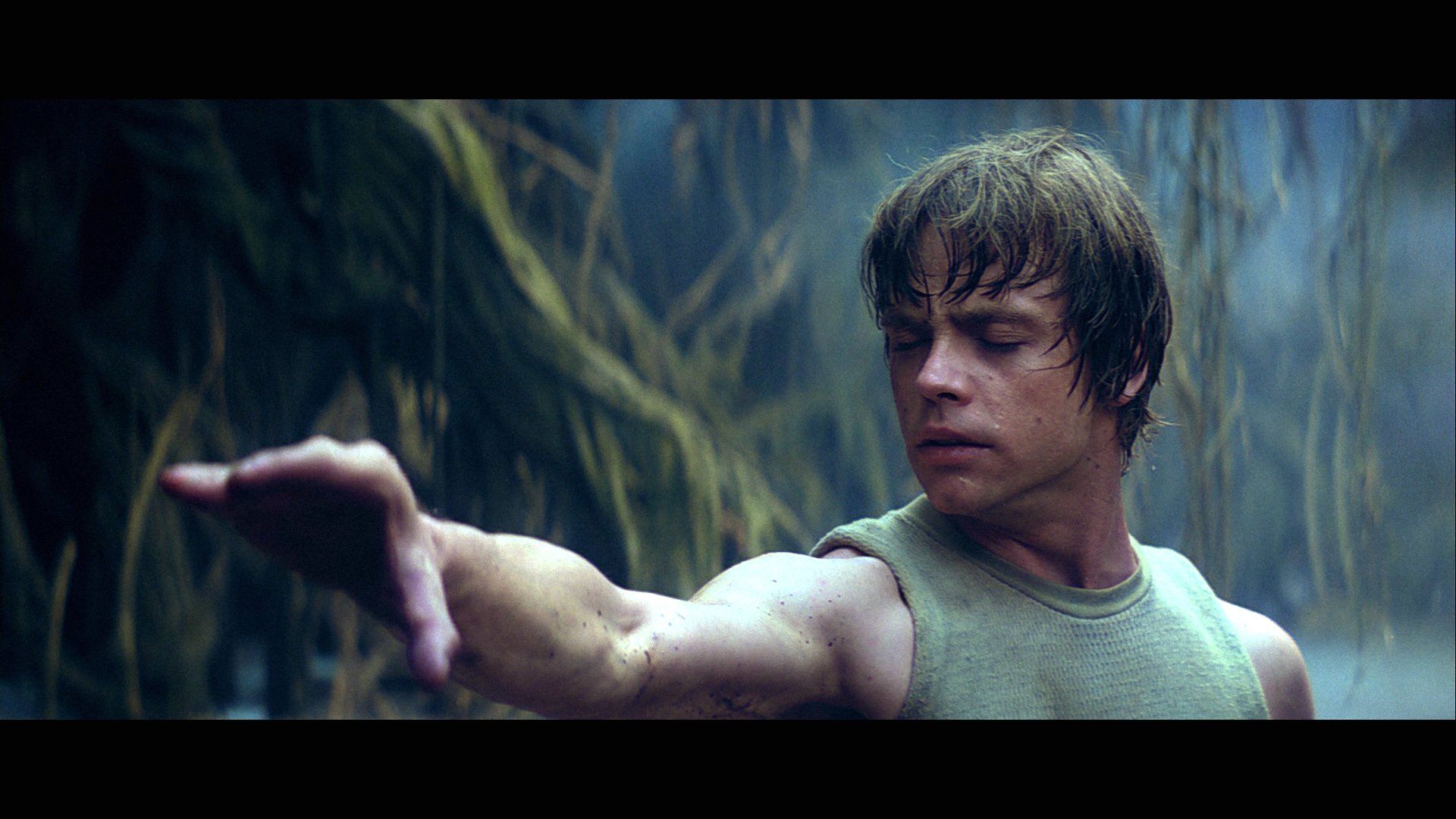 Empire takes a darker tone and sets up the thematic and symbolic touches to be resolved in the final film of the trilogy, Return of the Jedi (1983). Empire weaves a profound emotional investment between the audience and characters. Then, just as we’ve become so deeply involved, we watch the good guys all take a beating. The setback creates an emotional need in the audience for Return of the Jedi to put the Star Wars universe right.

On a broader note, Empire contains some of the great cinematic moments that have come to define Star Wars in culture: an excellent light saber duel, the introduction of Yoda, the loss of Luke’s hand, fantastic quotes (“I am your father”), intense space chases and battle sequences, an expansion of locations in the Star Wars world beyond Tatooine and The Death Star, and a great musical score, to name a few. Empire‘s budget was much bigger, so the filmmakers had freedom to achieve more stunning visual work. Although money and effects don’t automatically make a better picture, in Empire these resources were put to good use. George Lucas also brought in Lawrence Kasdan to help write the film and passed the directorial chair to Irvin Kershner—two more creative voices in the mix that clearly had a positive effect.​

The pivotal “I am your father” reveal in Empire serves as more than an entry in lists of great cinematic quotes and fodder for decades of T-shirts. The moment takes the half-mechanical evil monster that is Darth Vader and humanizes him through direct association with the franchise’s identifiable, likable protagonist. Luke is a symbol of everything that stands in opposition to Vader, and both characters, like the audience, are submerged in the emotion of the reveal. We are suddenly caught off-guard with the understanding that there is more to Vader than the black, robotic exterior—he was once a real person and is capable of appreciating the emotional wreckage Luke will feel from learning about his parentage. Similarly, Luke is transformed from the offspring of a droid-fixing desert farmhand to the heir of the (second) most terrifying man in space. The fun-but-thin space western that was A New Hope becomes something much more complex, character-driven, thoughtful, and frightening—with four simple words (followed by Luke’s realization that he’d rather plummet to his death than live as the son of such a tyrant).

Still, it’s impossible to say Empire is the “best” without facing some opposition. Just ask Colin Fleming at The Atlantic, who says A New Hope can’t be beat as the greatest Star Wars entry, or Steven Snyder at Time, who can’t quite commit to saying it’s the “best” because Empire couldn’t exist without A New Hope. Wherever you sit on the issue, Empire is admirable for its thoughtful character growth, incredible special effects, and all the fun a fantasy film can offer, and no entry in the original Star Wars trilogy is expendable.