In “Star Wars: A New Hope” did Han or Greedo shoot first? Why is it such a hot subject?

Mos Eisley Cantina. It’s one of the most revered locations in all of science fiction and fantasy, first introduced in Star Wars Episode IV: A New Hope (1977).

Who wouldn’t want to take a trip to the pirate city’s famous bar to have some drinks and chat with its various intergalactic patrons, listening to the Biths of Firgin D’an and the Modal Nodes as they play their music? And if you happen to be a bounty hunter with a price on your head, you may even get to take part in an abrupt gunfight. But exactly the way that last part plays out depends on your personal code of ethics and style, which depends on which version of the cantina you’re visiting.

One of the things that distresses Star Wars fans is the way George Lucas has re-released the original trilogy multiple times, and with each release makes minor changes peppered throughout the films. Some of these modifications are little more than unnecessary aesthetic movements, like sticking an extra rock in front of R2-D2 or adding scurrying rats to the desert floor. Those modifications, though arguably unnecessary, are cosmetic and make George Luca shappy without greater bearing on the film as a whole. But what gets under Star Wars fans’ skin is when modifications happen to components that directly impact the story or its characters.

Like that time A New Hope was re-released in 1997. A deleted scene from the original release was put into the film, wherein a real-life actor was replaced with a CGI version of Jabba The Hutt, forcing Hutt’s physical entrance into the Star Wars timeline two films before he is supposed to be seen. The appearance of Jabba in A New Hope completely destroys the feeling of awe felt when one finally sees his massive slug-like self in Return of the Jedi (1983) after hearing his name throughout the first two films. 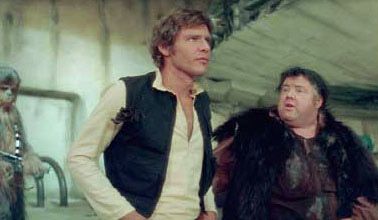 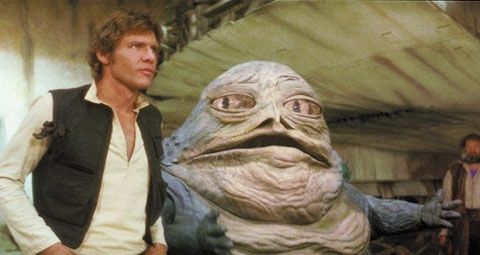 Worse than that is the now-infamous Mos Eisley Cantina scene between Han Solo (Harrison Ford) and Greedo. Han and Greedo both work for Jabba the Hutt. Before the events of A New Hope, Jabba puts a bounty on Han’s head, and Greedo corners Han at the cantina attempting to collect. Solo tries to talk his way out of it, saying he has the money to compensate Jabba and the need for a bounty is’t necessary, but Greedo isn’t interested. Under the table, Han quietly grips his blaster as Greedo carries on in Rodese about how he’s been waiting to kill Han for a long time. “I’ll bet you have,” Han replies…

It’s right here that Lucas decided to install one of his famous alterations—possibly the most criticized one in all of Star Wars.

In the original 1977 film, the shot cuts to a close-up of Greedo’s face, a blaster fires, a cloud of smoke emerges, and the camera cuts back to find Greedo slumped over the table. Han didn’t just shoot first—he was the only one who fired. Lucas later said he felt like this scene represented Han Solo as a cold-blooded killer, making it a challenge to identify with him as one of the film’s protagonists.

“It’s a movie, just a movie. The controversy over who shot first, Greedo or Han Solo, in Episode IV, what I did was try to clean up the confusion, but obviously it upset people because they wanted Solo [who seemed to be the one who shot first in the original] to be a cold-blooded killer, but he actually isn’t. It had been done in all close-ups and it was confusing about who did what to whom. I put a little wider shot in there that made it clear that Greedo is the one who shot first, but everyone wanted to think that Han shot first, because they wanted to think that he actually just gunned him down.”

That shows a disconnect with Star Wars’ core audience, and Lucas’ own material. Fans argue it’s not that they want Han to be a murderer, it’s that this introduction to the no-nonsense, do-anything, self-serving smuggler nature of Han Solo makes his eventual transition into full-on good guy more substantial. He shoots a guy at a table, stands up, flips the bartender a coin and says “Sorry about the mess.” It’s an incredibly badass way to say all there is to know about Han Solo’s character in one scene, and it establishes him as a morally ambiguous criminal who isn’t interested in anything but his own hide. When he later makes a clear slide from anti-hero to hero, the contrast between then and now works wonderfully.

Lucas changed the film in 1997 so that Greedo shot first, Han dodged the blast, and returned fire. It’s presented as an act of instant self-defense, which diminishes the impact of the original scene and Han Solo’s overall character arc. Plus, it’s just silly and condescending to say that Greedo, a professional bounty hunter, would miss shooting someone at point-blank range.

In 2004, the scene was edited yet again, showing two near-simultaneous blasts coming from each party. It’s hard to tell who shot first, but of course, again, Greedo misses and Han doesn’t.

For the 2011 Blu Ray release, the scene was edited yet again. Frames were removed from the 2004 version to tighten up the motions.

Of course, an original draft of the script was found which makes no reference to Greedo ever firing a shot.

There’s really nothing wrong with making modifications to films as time goes by. New technologies allow for greater capabilities, particularly in the science fiction genre, and classic titles are frequently coming out with enhanced graphics or digitally-added material. But changing something that directly impacts the narrative arc of a classic cinematic character is risky business, and that is primarily what has caused such a heated issue between fans and George Lucas when it comes to Greedo and Han. But, any Star Wars fan dedicated enough to get up in arms about the change knows the facts—in 1977, in the “true” and authentic version of A New Hope, Greedo didn’t stand a chance.

Here’s a video for some more comparison: