Why Do Able-Bodied Actors So Often Win Oscars for Portraying Disabled Characters?

Since the beginning of cinema, representations of disability have been a mixed bag. There have been an array of stereotypical depictions, often in horror films and comedies, along with more positive portrayals in dramas and frequently science fiction, while the portrayal of disability in fiction films differs from that of documentary and reality TV shows. One of the most striking trends in narrative cinema is that filmmakers and viewers have historically been more comfortable watching able-bodied actors performing disability than they have ever been with casting performers with disabilities to play those characters. A survey of the Academy Awards winners for Best Leading Actor over the years quickly reveals that the film establishment is quick to reward the performance of disability by those who are able. Meanwhile, disabled actors have been infrequently cast in complex, lead roles over the years.

Tod Browning’s Freaks (1932) is an early and relatively rare example of casting actors who actually live with the same disabilities as their characters. Its initial critical reception was mixed, due in large part to critics’ discomfort with the experience of witnessing real disabilities on-screen. One particularly insensitive contemporary critic even called Freaks “the most startling horror story about the abnormal and the unwanted.”

While contemporary critics would be unlikely to use such dehumanizing language, contemporary film remains unwelcoming to actors with disabilities. Even today, characters portrayed by disabled actors are often cast in a negative light, shunted into supporting roles or rendered invisible (think Kenny Baker as R2-D2 in Star Wars or Warwick Davis in the Harry Potter films, 2001 - 2011). Peter Dinklage as main character Tyrion Lannister in HBO series Game of Thrones (2011-) is an exception to this rule, in that, while the plot of Game of Thrones sometimes involves the character’s dwarfism, Dinklage’s performance has been widely praised and beloved for the character’s sardonic wit, edgy humor and underlying humanistic outlook, which are the audience’s primary experience of the character. Some see in Dinklage’s character a positive trend in the creation of more nuanced roles for diverse actors, while others see the trend of casting able-bodied actors in disabled roles as almost wholly unaddressed by major TV networks and film studios.

While these performers are offered limited opportunities and screentime, the majority of leading characters with disabilities are portrayed by actors who are considered “able-bodied,” much like how trans women in film are often played by cisgender men (e.g. Dallas Buyers Club, 2013, and Danish Girl, 2015) and heterosexual actors often play gay characters (e.g. Brokeback Mountain, 2006). Actors go the distance in these roles, transforming physically or psychologically, a practice the film industry encourages as a virtuosic display of acting skill. So, why are these able-bodied actors playing characters with disabilities? Perhaps the most obvious reason why these actors are cast and these performances are so heralded is because it allows filmmakers to employ actors with clout while also showing able-bodied people’s appreciation of difference.

While casting able-bodied actors as characters with disabilities is a politically and ethically fraught subject, these roles arguably offer a unique opportunity in the acting craft, as they challenge actors to go to great lengths to accurately and sensitively portray their characters. David Lynch’s The Elephant Man (1980), for example, tells the true story of Joseph Merrick, a severely deformed freak show performer who progressively reveals himself as a sensitive, intelligent man. Merrick suffered from Proteus Syndrome, and the nature of his condition was specific in terms of appearance: he had an unusually large skull, loose skin on his chest and back, a deformed right arm, and deformities around his mouth. Merrick’s appearance was replicated for the film with costume design and make-up, including prosthetics for his head and right arm. While these physical additions aided star John Hurt in his performance, the actor also performed extensive research into the real life of Joseph Merrick, particularly regarding the specifics of Merrick’s voice and physicality. For his sensitive and detailed performance, Hurt received an Academy Award nomination for Best Leading Actor. 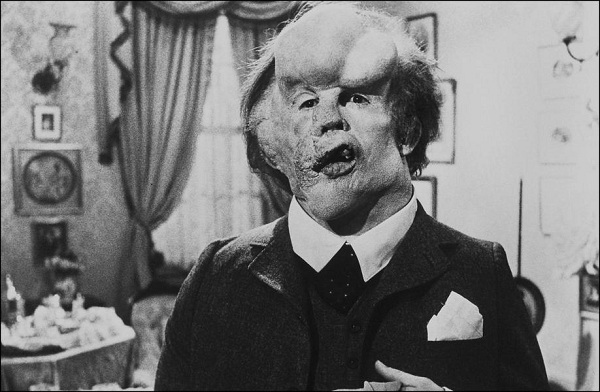 Another biographical drama, My Left Foot (1989), tells the story of Christy Brown, an Irish artist and poet who suffers from cerebral palsy. The role was a physical challenge for actor Daniel Day-Lewis, although the actor has described how, despite their physical differences, he was able to relate to the character’s interior life. “I felt I had an understanding of, to some extent, his anger, his frustrations, his desire to create, his sense of impotence,” Day-Lewis said. “Many different aspects of his life I felt I had an understanding of, and they didn’t relate specifically in my mind to his disability at all.” Like Hurt, Day-Lewis’ performance is both physically specific and emotionally probing and won him the Academy Award for Best Leading Actor.

While we often think of disability in terms of physical ability, several notable films have featured characters with intellectual disabilities, presenting a different, less visible challenge to actors. In films such as Rain Man (1988) and Forrest Gump (1994), we see leading characters with clear developmental disabilities. In the former, Raymond Babbitt (Dustin Hoffman) is a middle-aged, high-functioning autistic man, and Hoffman’s performance has been considered to be an accurate depiction of the condition. Forrest Gump (Tom Hanks) has complex learning difficulties that are never named but are clearly implied throughout the film. We also see Forrest first overcome a physical disability as a child by running out of his leg braces, and the child playing the younger version of the character is yet another able-bodied performer playing a character with a disability. While Hanks portrays the adult Forrest as physically able-bodied, the character continues to grapple with mental disability. Both Hoffman and Hanks won the Academy Award for Best Leading Actor for their performances. The King’s Speech (2010), directed by Tom Hooper, is unique among award-winning representations of disability in that it focuses neither on physical or intellectual difference but on speech difficulties. It tells the true story of Prince Albert (aka “Bertie”), whose speech impairments cause him to struggle with public speaking and personal confidence. As he faces the prospect of becoming King George VI - and leading his country through World War II - he begins to find the strength to fight against his stammer and become a strong and noble king. Whether stammering or speech impairments are strictly considered disability is debatable, but The King’s Speech interprets it as such in its triumph-over-adversity storyline. (Unlike some other characters discussed here, Bertie/King George VI was able-bodied apart from his speech impediment.) Colin Firth won the Academy Award for Best Leading Actor as Bertie, and supporting actors Geoffrey Rush and Helena Bonham Carter also received Academy Award nominations, demonstrating yet again that the Oscars love to watch able-bodied actors tell stories about overcoming impairment. 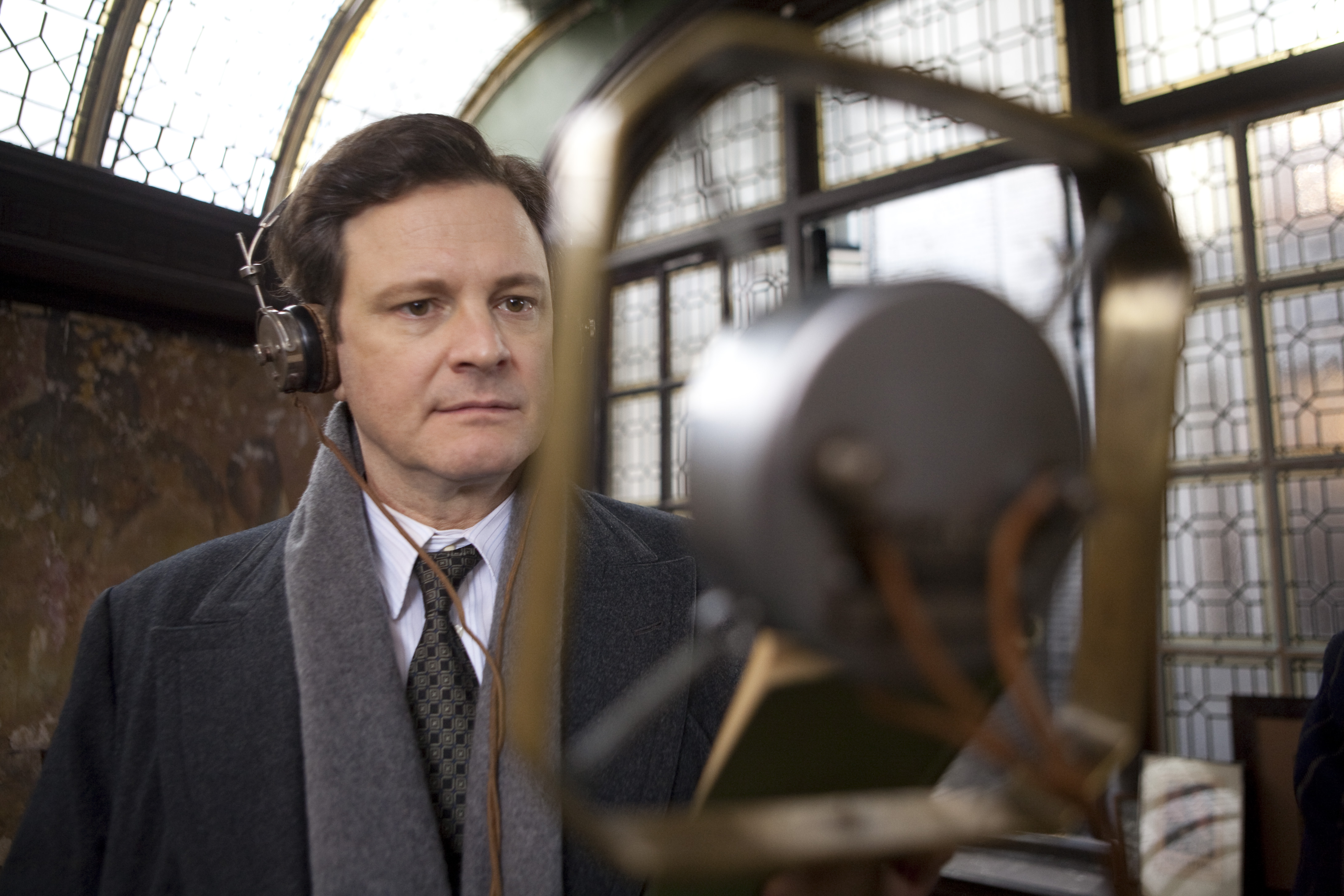 Most recently, we watched a film with a narrative arc that requires an able-bodied actor to play a disabled character: The Theory of Everything (2014), the story of Stephen Hawking’s growing success in science and the parallel worsening of his motor neuron disease. Because Redmayne’s performance involves showing a person’s motor skills deteriorating, the role demands an able-bodied actor, who can also portray Hawking before the disease’s acceleration. Hawking himself praised Redmayne’s acting, claiming that he cried and saying, “At times, I thought it was me.” The film presents insight not only into Hawking’s life but also into his relationship with his wife Jane (Felicity Jones) and her struggles to maintain a stable family. Rather than simply following Hawking’ career and health troubles, it examines how families deal with disability, ultimately showing the limitless possibilities of what a person can achieve, regardless of physical ability, with love and support. As the character of Hawking says in the film, “We are all different. However bad life may seem, there is always something you can do, and succeed at. While there’s life, there is hope.” Redmayne, perhaps not surprisingly, received the Academy Award for Best Leading Actor. (It is interesting to note, too, that Redmayne more recently portrayed a trans female character in The Danish Girl, a film that some argued should have featured a trans female actress in the role.)

Looking back at this long history of able-bodied actors winning Academy Awards for playing characters with disabilities, it’s striking that the film establishment so evidently admires and awards the endeavor yet appears to be uncomfortable casting disabled actors in the same stories. Because these characters are often framed by the triump-over-adversity narrative arc so beloved by the Academy and offer actors the opportunity to demonstrate extensive research and skill, it’s not hard to understand why these performances are frequently rewarded with accolades. On the positive side, films about characters with disabilities undoubtedly raise visibility and allow audiences the opportunity to empathize with difference. But the question of whether able-bodied people should play characters with disabilities is controversial, particularly in the face of the limited opportunities available to actors with disabilities. It remains to be seen whether this long-standing tradition will be shaken in coming years and whether productions will look for more disabled actors to fill these roles. Cinematic history does offer admirable examples of serious, respectful and sensitive performances by able-bodied actors that should be valued for the empathy they inspire in audiences. With today’s changing attitudes and growing awareness of the issue, however, the Oscars’ love affair with able-bodied actors playing disabled protagonists may be forced to come to an end.