What Were The First Hollywood Films About Rape?

Quick answer: The first Hollywood films about rape - Johnny Berlinda and Outrage - deal directly with the taboo subject, acknowledging the trauma, judgment, stigma, and the lack of assistance to the victims, even though they remain products of their time and still contain dated elements.

Hollywood has created many films that include rapes or the subject of rape. Sexual assault may be depicted with dramatic poignancy or exploitative excess, or it may be discussed without being shown. From the low-budget slasher film or Lifetime Channel melodrama to the powerful “based on a true story” exposé, rape within American entertainment cinema is practically ever-present, whether it is a meaningful element or an emotionally manipulative device. (Take a look at Queen Cockatiel’s list of hundreds of movies with sexual assault/rape in them for an introduction.)

By comparison, relatively few films in Hollywood history have taken the subject of rape and the impact of being raped on a woman’s life (much less a man’s) as their centerpiece. This limitation was especially true during the Production Code era (1930-1968), when censorship made the subject taboo, particularly during the infamously conservative Joseph Breen years (1934-1954). Arbitrary distinctions of “decency” and narrowly defined, Catholic-inspired family values rhetoric made rape as inappropriate a film subject as adultery or even divorce. Only lengthy arguments and cautious representational strategies enabled any films at all about rape to be made during the Breen years.

The first ever Hollywood rape film is generally acknowledged to be Jean Negulesco’s Johnny Belinda (1948). The restriction was relaxed for this precedent-setting production based on a 1940 Broadway drama about a deaf-mute woman in a rural community who is raped and subsequently gives birth to her rapist’s child. Emphasis on lies and harmful gossip, the murder of the rapist by his victim, and the subsequent romantic happy ending keep the film safely within typical Hollywood melodramatic territory, though the film does not shy away from the horror and injustice of rape, and invests itself in the subject of the rights of individuals with disabilities, too. Jane Wyman, who plays protagonist Belinda won an Academy Award for Best Actress and a Golden Globe for her performance, and the film was well-received by audiences at the time. 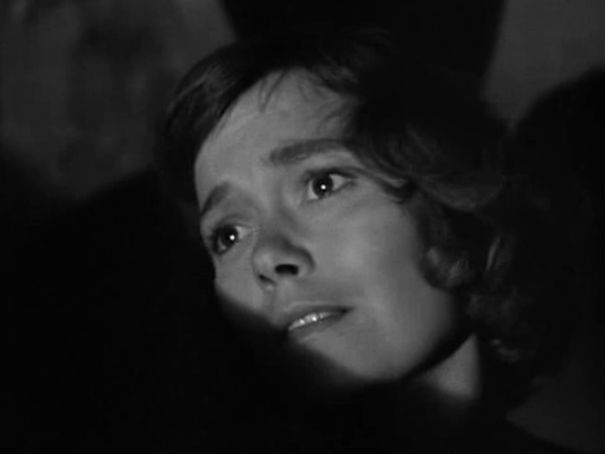 Two years later, RKO released the low-budget film Outrage (1950), directed and co-written by Ida Lupino and her then-husband Collier Young (with whom she soon after founded the independent film company The Filmakers [sic] to produce inexpensive social issue films). This black-and-white B feature stars unknown actors (Mala Powers in her first leading role and Tod Andrews) in a tale of white middle-class working girl Ann Walton, who is raped by a man who has been watching her from the lunch van he works from. He follows as she walks home from work one evening and attacks her (the film uses the term “attack,” not “rape,” throughout). Ann undergoes severe trauma. Her panic as she flees her attacker is vivid, and subsequently we are drawn into the responses of those who love her, caring individuals who simply do not know how to help her – or even how to cope themselves. Her parents fret and fuss, the family doctor advises bedrest, and her fiancé Jim demands that they marry immediately and act as if nothing has happened. People in her neighborhood vary from well-meaning to harshly gossipy. Co-workers try to return to normal, but Ann is sure they are all staring at and judging her. These experiences and attempts to control her – especially Jim’s aggressive verbal and physical demands – lead Ann to run away. 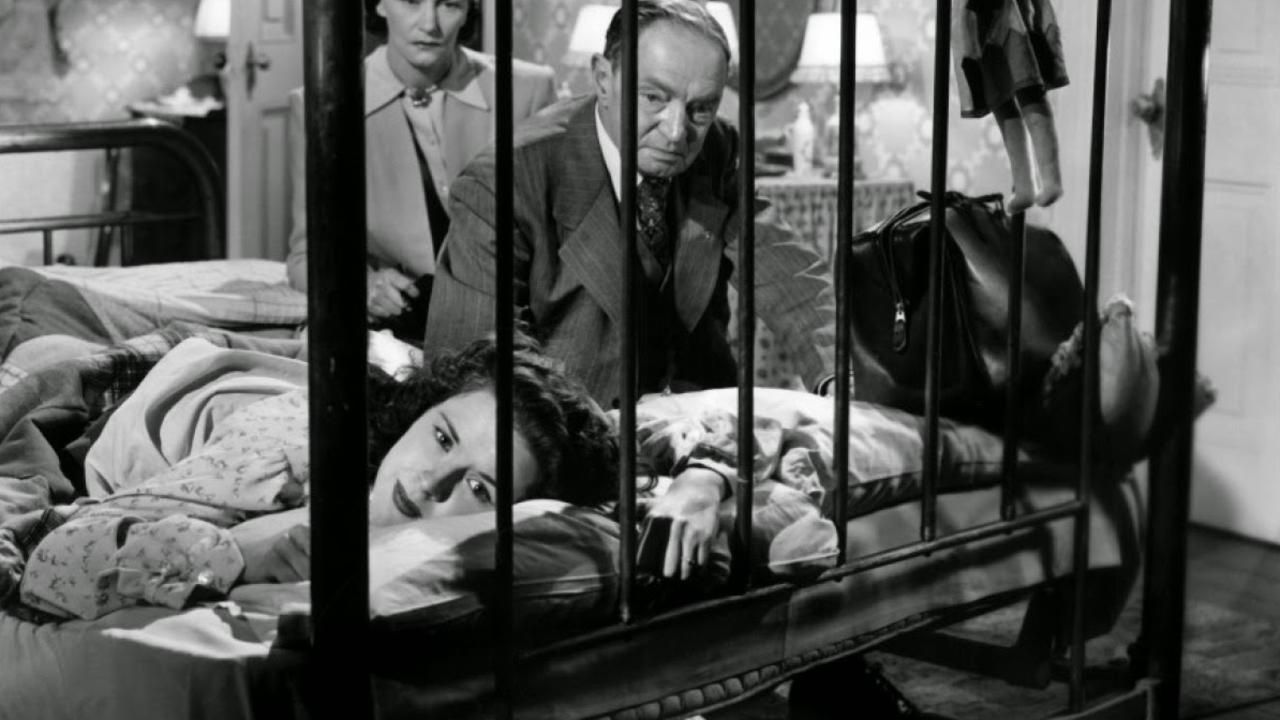 Along the way, she meets Rev. Bruce Ferguson, a former New York priest who hides out in a small town to deal with post-war life after a major injury accompanied by feelings of unworthiness. The two form an unlikely but therapeutic friendship. But when a man at a local dance touches Ann without permission and then attempts to kiss her, she is thrown back to the original rape and nearly kills her “innocent” attacker. Bruce suggests the man did not mean any harm, but viewers see otherwise—or at least that the “harm” of nonconsensual touching varies from kindly outsider to victim. When the District Attorney considers whether Ann must serve jail time for her crime, Bruce eloquently persuades him that Ann’s violence is the direct result of a lack of mental health care for those who have been raped. Ann is sentenced to a year with a psychiatrist, after which she at last parts with Bruce, and returns to her family and her fiancé. 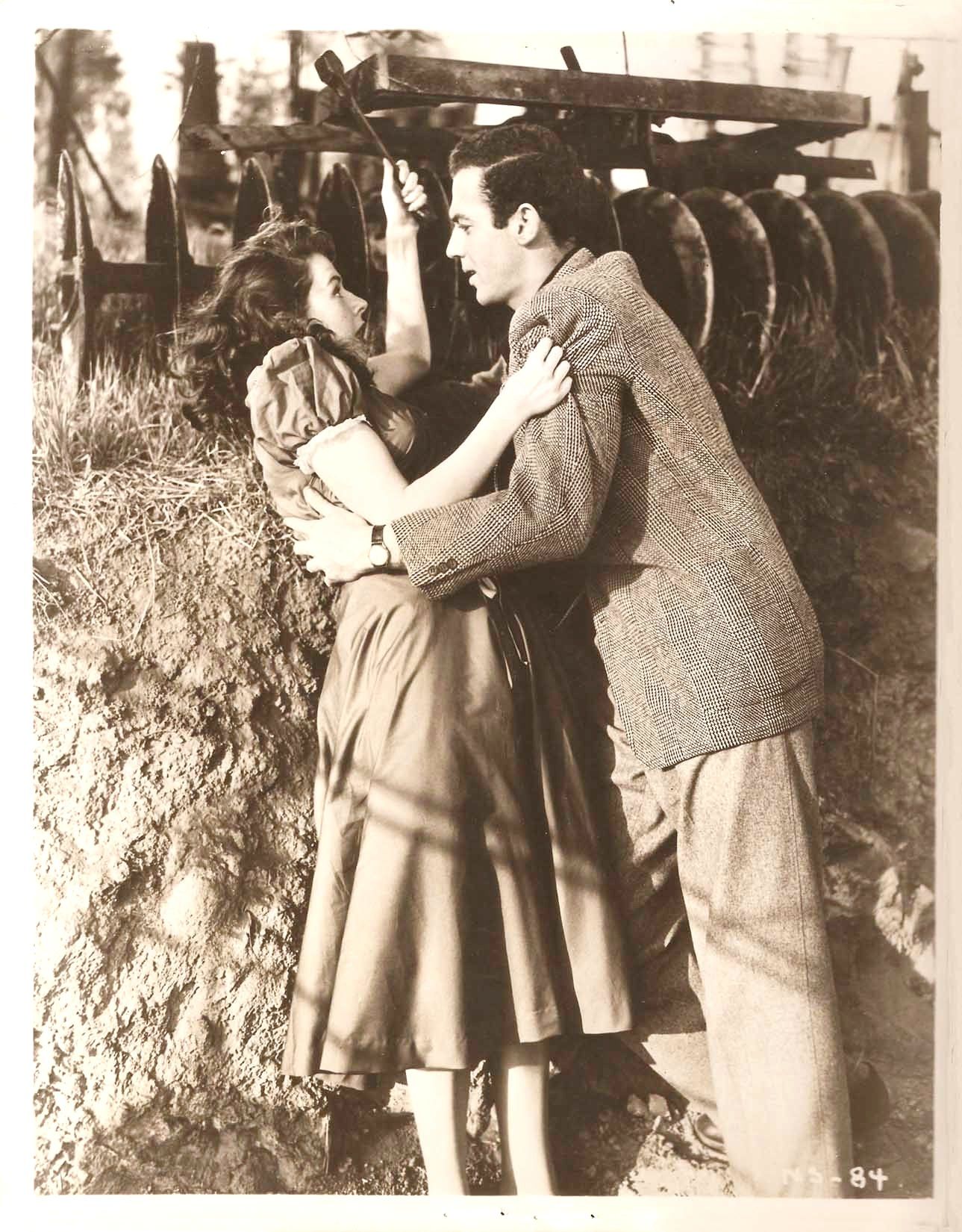 There are many similarities in Johnny Belinda and Outrage, rendering them very much products of their era and Hollywood norms. Both pictures find their abused protagonists ultimately beholden to a generous and understanding man. Outrage’s Bruce is not unlike Johnny Belinda’s Dr. Robert Richardson (Lew Ayres), a caring doctor who teaches Belinda to communicate and ultimately takes her away to a happily-ever-after as her husband and adoptive father to her child. 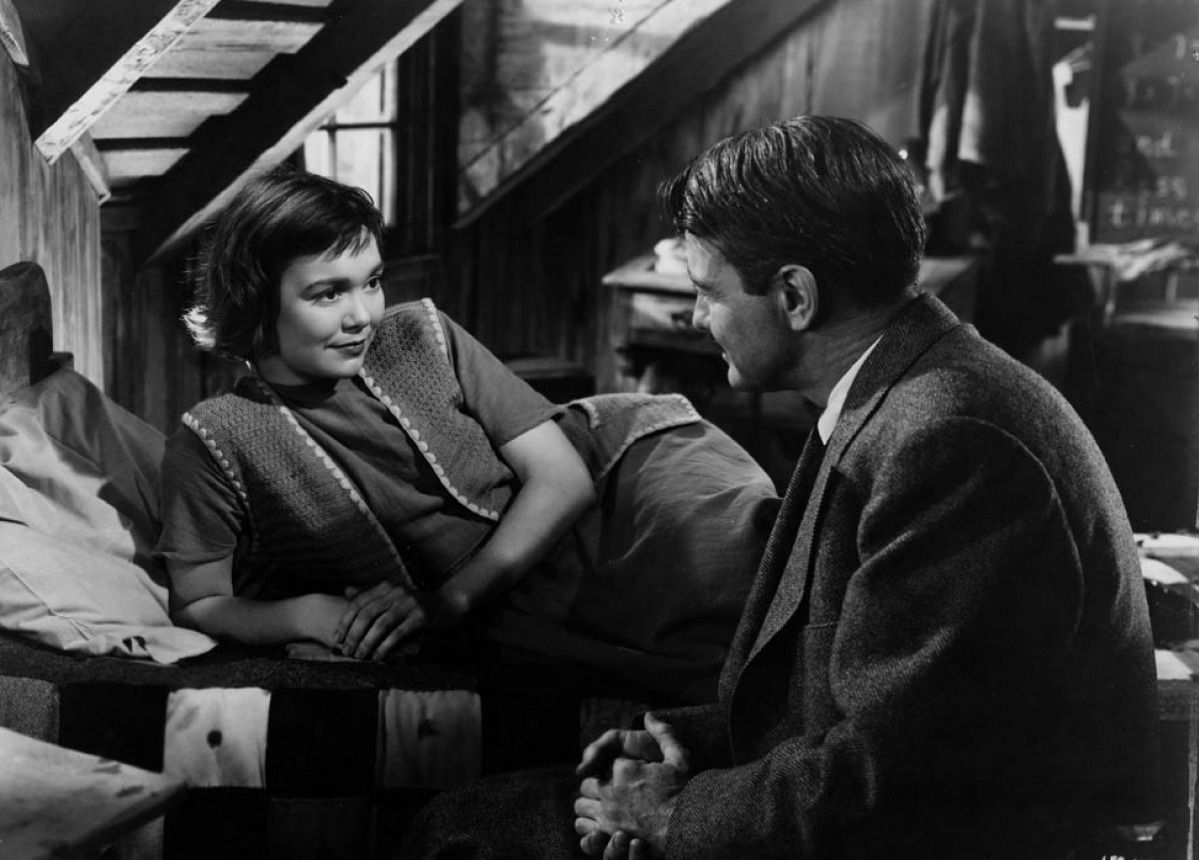 In Outrage, there is less romance and greater symbiosis between the two leads. If they’re not equals, Ann brings a purpose to Bruce’s life, and he brings reassurance and comfort to hers. Certainly, Ann and Belinda both are shown to need rescuing by an outsider, but Bruce Ferguson is excluded from the category of romantic interest by his vocation and his own issues. Director and co-writer Lupino seems particularly invested in avoiding romance as a solution to the trauma of rape. Both films, nonetheless, deserve recognition for attending directly to the stigma of rape, depicting lies and gossip that add to the suffering of the victims, requiring both to leave town to escape shame (Belinda permanently when escorted off by the doctor at the film’s conclusion; Ann early on and then returning after more than a year away). 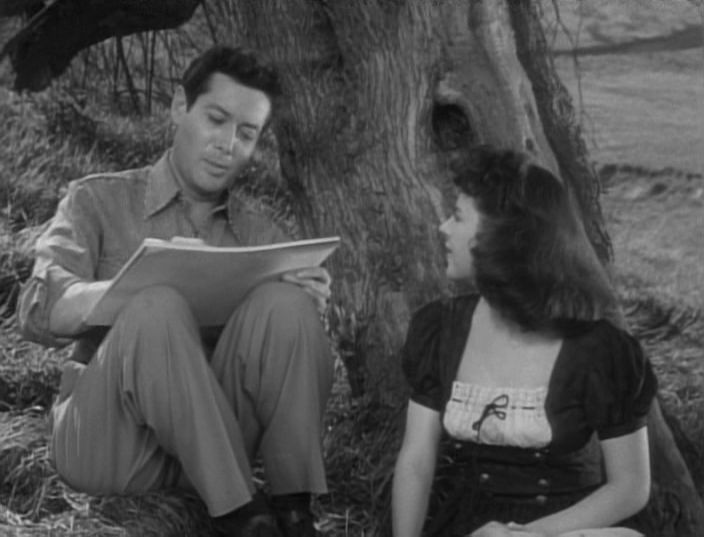 Rescuer Bruce nurtures but does not romance Ann

A related subject of both films is the issue of virginity. Both characters are clearly portrayed as virgins: Belinda because her deaf-mute status means she does not socialize; Ann because she is waiting until she marries Jim. The cultural myth of virginity holds that a woman must be “pure” to be marriageable. Otherwise, a man might deem her used or soiled, no longer worthy because no longer exclusively “his.” This perspective is rejected openly by Johnny Belinda in the person of Dr. Richardson and despite the obvious evidence of Belinda’s non-virginity in the child she bears. His perspective is depicted as remarkable, however, unshared by the ignorant rural townspeople. In Outrage, Ann’s fiancé adopts an alternative perspective to those who judge and reject, as well as the man who remains nurturing and nonjudgmental. Jim aggressively shakes Ann by the shoulders, demanding that the incident be forgotten so he can continue on the path to becoming her husband as though she had not been raped. He symbolizes a domineering perspective that does not reject but also does not accept or recognize her pain. Still, we are told he is waiting for her back home at the end of the film, still ready to move forward – a position of sympathetic compromise, at least. Ann herself is the one who feels most guilt and anxiety, and Outrage devotes much of its runtime to its protagonist’s perspective. By contrast, choosing a deaf-mute for the main character in Johnny Belinda adds to the difficulty of accessing her feelings and thoughts beyond pain and fear, allowing the film to skirt such complexity. In both films, viewers witness the silencing of victimized women on the subject of rape at literal and symbolic levels.

Reclaiming a bit of feminist voice appears in the title of Lupino’s film, Outrage. The rape is an outrage against Ann, a violent social ill that must be confronted. Because the title does not personalize or direct the outrage to a specific character’s point of view or moment, viewers are invited – or even provoked – to share the outrage as they watch the events unfold. By contrast, Johnny Belinda is titled for Belinda’s bastard child of rape. Patriarchal naming conventions and the primacy of fatherhood is interrogated in the film by the act of rape, but Dr. Richardson solves the conflict when he takes Belinda away with him. Such closure – unlike the ending of Outrage, in which Ann goes back home, but very much changed – directs attention away from any “outrage” we might feel. 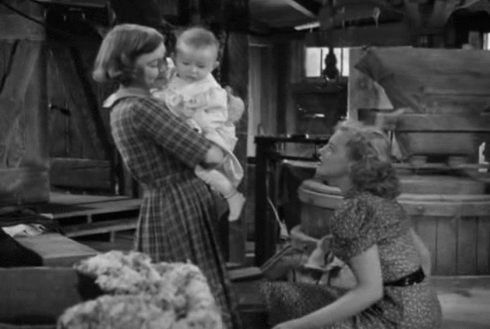 The title and focus on Belinda’s baby directs focus away from “outrage.”

Ultimately, for both films, contemporary viewers will likely find obvious their dated and romanticized elements (e.g., romantic rescue, no options other than giving birth to a baby born of rape, kind priests looking for someone to help, idealized men waiting years for their beloved to return “healed”). Nonetheless, we may find equally plain the surprisingly progressive elements of directly representing trauma, judgment and stigma, as well as the lack of available resources to properly assist victims of rape and their loved ones. We even recognize the ongoing relevance of such issues in today’s America.