What does the feather in “Forrest Gump” symbolize?

Quick Answer: The feather in Forrest Gump reflects many of the film’s messages: life is full of uncontrollable events, innocence is lighter than air, some things are the result of luck, and the fact we never know what is next on the horizon for us. Much of Forrest Gump’s story is about the way humans explore the experiences they’re given in life, for better or for worse, when they don’t know what is coming.

In the 1994 classic Forrest Gump, the dim-witted titular character (Tom Hanks) navigates his way through decades of American history, finds himself present at important events, stumbles into great success, and does his best to maintain relationships with those he loves. The film is book ended by shots of a feather blowing in the wind, weightless and aloof, accompanied by Alan Silvestri’s now-iconic music. The feather travels all about the air, through the town, under a car, eventually landing beside Forrest’s dirty tennis shoe as he sits on a bus stop bench in Savannah.

Why frame the film this way? The feather can be seen as many things—a metaphor for the random nature of life; an icon of fatalism expressing the uncontrollable events of life which make us the way we are; the aleatoric essence of our existence; innocence being carried on the winds of destiny; and, most simply, blind dumb luck. In the case of Forrest Gump, the feather symbolizes all of these things. They are all the methods by which Gump navigates his life, which give him grand opportunities, and which transform what could have been a passive existence for a slow-minded individual into a magnificent and rich history.

When Gump is kneeling at Jenny’s (Robin Wright) grave late in the film, he says, “I don’t know if we each have a destiny, or if we’re all just floating around accidental-like on a breeze, but I, I think maybe it’s both. Maybe both is happening at the same time.” It’s this impactful quote which speaks to the feather’s significance. While the feather moves through the air completely at the whim of the breeze, it still manages to find Gump’s foot. Its fleeting, inconsequential movements all amount to something tangible, just as life itself is malleable and unexpected in the present moment but can be quantified in retrospect.

We see the feather again at the closure of the film, after the death of Forrest’s mother (Sally Field), the death of Jenny, the death of Bubba (Mykelti Williamson), long after the Vietnam War and Watergate and the space race, after Lieutenant Dan (Gary Sinise) makes peace with the world, after Forrest’s successful careers as a shrimp mogul and a ping pong player and a cross-country runner come to a head, and after he discovers he has a son who he’s just put on the school bus—the beginning of another phase of wonderful, random, blissful happenstance which will amount to a life lived. 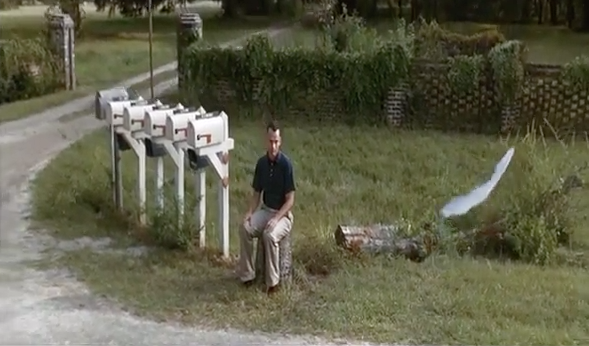 The end of the film, as the feather flutters away

The feather also lets us know that life isn’t fair. Gump was born slow and had to wear leg braces. Jenny’s father sexually abused her as a child, which colored her whole life. Lieutenant Dan broke the family tradition he aspired to uphold when he didn’t die in battle. The ideas of philosopher Jean-Paul Sartre would view Forrest Gump as a distinguishment between human nature and the human condition. Humans all exist in the same condition, thrust into life on earth as a universal reality. But the type of life we lead within that shared condition is completely unique due to our individual free will.

Forrest Gump’s emphasis is not specifically this notion of fate or destiny, but the way we as humans handle what is presented to us. Gump isn’t intelligent enough to be shy or talk himself out of opportunities, so he walks into every situation with the eagerness of a child and took ownership of his life. The philosophies he adopted from his mother, such as “Life is like a box of chocolates, you never know what you’re going to get,” speak to the film’s existentialist messages. Just as one never knows what is inside a piece of chocolate, you never know where a feather will land. We are all afloat in life, partly in command of our own decisions, and partly taking things as they come at the whim of circumstance.