What are the sexual politics of “Invasion of the Body Snatchers”?

Invasion of the Body Snatchers (1956) is routinely explored as political allegory indicative of 1950s American paranoia. What’s less analyzed is the film from the viewpoint of other cultural anxieties of the era — namely, the ones that evolve between Miles (Kevin McCarthy) and Becky (Dana Wynter), beginning from the first moment Ms. Wynter steps into frame in her stunning strapless gingham dress. 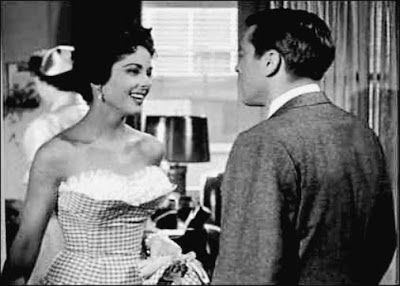 The 1950s stirs up images of stereotypical American family life and a version of pleasant domesticity that affirms the nuclear family and maintains traditional gender hierarchy. But this image isn’t always one of conviction — certain titles, Invasion of the Body Snatchers among them, question whether the free-spirited, independent woman can thrive in a hostile society and present the male as something less than a confident preserver of the status quo. It would be naive to assume that, amidst the confusion and paranoia of post-war America, 50s society was not, at least under the surface, as conflicted about domestic issues as it was about political and social ones.

Initially, Miles and Becky’s relationship is somewhat traditional. In the film’s earliest dialogue, Miles’ secretary mentions that Becky is back in town after spending time away. He attempts to downplay his reaction, but the response is evident. When Becky shows up shortly thereafter in his office donning a bare-shoulder strapless dress that would have seemed risqué in 1956, she is immediately established as an object of interest — not just for Miles but also for the audience’s gaze. The two are witty; they banter, and they charm one another, easily slipping into standard male-female dating roles as would be expected of the time. Even just a few scenes later, when Becky spends the night in Miles’ apartment for an evening of obviously furtive relations, she wakes up to prepare him breakfast like a happy housewife.

Miles and Becky are both divorcées, yet they take on the characteristics of a married couple. The promise is there — Becky falls pretty hard for Miles before the film ends (even saying she “wants his children”), and it’s pretty clear from his giddiness at the mention of her name that Miles has felt strongly for Becky since long before the picture’s opening. Still, underneath the courting game we play, we sense tensions and conflict related to the standard husband-wife domestic existence that supposedly lies ahead.

In his book about the film, author Barry Keith Grant says Invasion of the Body Snatchers’ ultimate horror is that it is “intimately bound up with the dread of sexual difference and of female sexuality… a masculine horror fueled by rapidly changing gender roles after World War II.” Grant writes, “While Miles is immediately attracted to Becky, he is also threatened by her independence and self-assured sexuality, jokingly calling her a ‘forward wench,’ when she leads him into her father’s darkened house… His jocular demeanour masks his underlying anger at women in general as he comments to Becky that while his ex-wife, like Becky, gets to collect alimony, he has to pay his ‘dues’. ”

Once Becky becomes a pod at the end of the film, Miles kisses her, and the kiss isn’t returned. He describes it as the moment he “truly understood fear,” having been denied her embrace at the pinnacle of their romantic development. Grant states, “Becky’s refusal to be seduced by Miles’ kiss makes her nothing less than a monstrous embodiment of the more independent woman in postwar America.” She has become a pod and fallen in line with the masses. The woman who started the film as a free-spirited divorcée with a strapless dress and an air of whimsy has conformed to the ideas of the herd. Grant even goes so far as to connect the bubbling white liquid that pours from each freshly opened pod to the white dress Becky wears; the night before, she dons a floral pattern.

But is Becky’s refusal to be seduced an indication that she, like the others, has lost her precious individualism and free-spirited autonomy to the disease of the pods? Or was her free-spirited sexual independence itself the problem that has led her down this dark path? Was Invasion of the Body Snatchers trying to create fear of the independent, modern woman who would no longer return her man’s kiss, or was it presenting an inevitable movement toward a near future when old-fashioned men could no longer count on women’s readiness to play the happy housewife with no need for greater freedom? Ultimately, the film’s moral judgment of Becky’s transformation is unclear. Liberals may see her turning away from Miles as a knock on rigid gender norms, while conservatives may see her brainwashing as an attack on family values by empty progressive ideas. Becky’s plot is ambivalent and socio-sexually charged, keeping in line with the contradictory nature of the film’s allegorical interpretations on the political level.

As is true for the film’s political message, it’s uncertain what the filmmakers’ intentions were in terms of a message about sexual politics. Siegel and Wanger have generally maintained that their story was one of science fiction and thrills, not primarily of social commentary. Nonetheless, the conflicted gender message of the film signals a landscape of developing social change under the surface image of domestic bliss in the 1950s.