How does Bond’s behavior in “Dr. No” reflect 1960s Cold War paranoia?

The personality of James Bond hasn’t evolved much in his 50+ year career on the silver screen. He’s rather steadfast in his “Bond-ness,” maintaining his suave, charismatic, womanizing position. But in Dr. No (1962), the film that extracted the beloved character from novels and birthed a cinematic icon, Bond (Sean Connery) isn’t the unflappable and extreme action hero we know from later films. Dr. No is a picture where Bond better articulates the role of detective than any other, shrouded in the very prominent tone of Cold War paranoia. Here, the story focuses on thwarting a madman with missiles who wants to take over the world.

Dr. No’s Bond doesn’t smirk in the face of danger. He doesn’t find himself in situations requiring death-defying action or inhuman physical stunts. For most of the film, he hardly breaks a sweat. He tiptoes his way through much of his Jamaican landscape, keenly tuned into the duplicity of many people he encounters, setting traps and carefully staging movements to keep himself alive and uncover the truth.

When Bond arrives in Palisadoes Airport, he navigates his surroundings as though he’s in enemy territory. A random woman tries to snap his photo, so he turns his hat to cover his face. A man allegedly sent by the Government House offers to give him a ride, so Bond goes to make a phone call and secretly verify that claim. As it turns out, his paranoia is justified—both of these folks turn out to be agents working against him. It seems Bond is incredibly tuned into his surroundings and skilled at seeing through people on first glance. 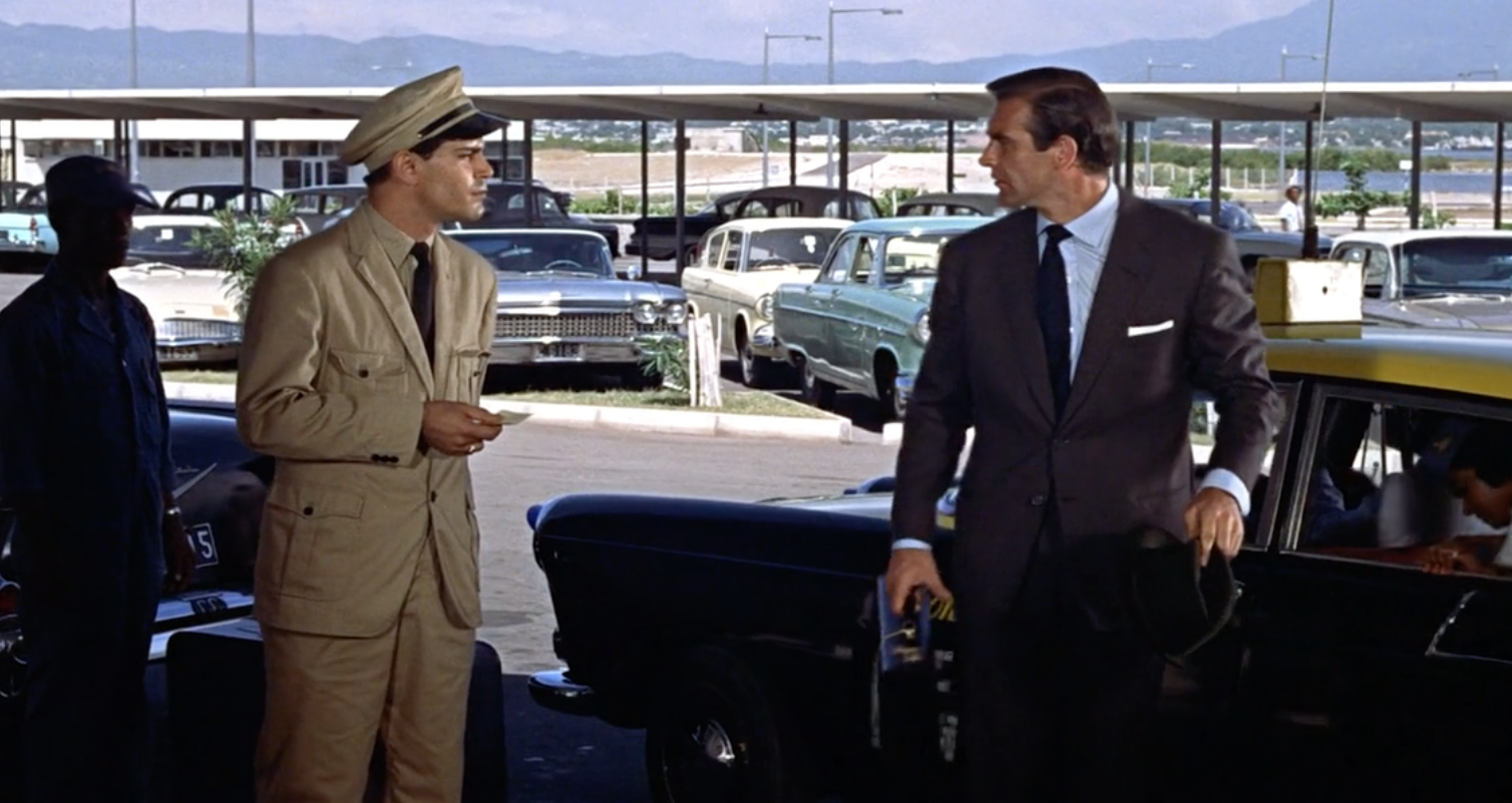 Bond’s behavior throughout the picture reflects these attitudes. In modern Bond films, we’re used to seeing him utilize crazy gadgets and fancy technologies to thwart his enemies. Dr. No’s Bond has no such assistance. His fanciest tech tool is a microwave-sized Geiger counter; everything else is improvised. When he wants to know if someone has broken in to search his hotel room, he puts powder on his briefcase and a moistened hair across the closet doors. When he stages a bungalow anticipating the arrival of Professor Dent (Anthony Dawson), he stuffs a bed with pillowcases, puts two glasses of liquor on the living room table, and drapes a sport coat across the couch before lying in wait. Later, he instructs sidekick Quarrel (John Kitzmiller) to chop some jungle reeds to use as breathing tubes while hiding underwater. Bond doesn’t enter this story equipped for the troubles he encounters—he has to make things up as he goes.

OverThinking It examines these behaviors, saying, “This paranoia extends to Bond’s practices. The focus on procedure – how to secure a room for tamper detection, how to set an ambush – serves two purposes. The first is to communicate an air of paranoia without relying on exposition. Instead of murmuring about being on his guard – or, worse, having a sidekick to narrate to – we get several wordless but artfully scored scenes of Bond setting traps. It’s a minor bit of craft, remarkable only in how deftly it’s used here and how much you notice its absence in poorer films.”

These motions also reveal Bond as a truly independent character. He’s confident and intelligent, in touch with the Crown and always surrounded by women, but his essence is that of a lone wolf.

Analysts have called Ian Fleming’s Dr. No novel (published in 1958) as a foreshadowing of the Cuban Missile Crisis, the events of which happened nearly in tandem with Dr. No’s theatrical release. As h2g2 writes, “Ian Fleming’s novel Dr. No remarkably predicts elements of these coming conflicts: the story is set in Jamaica, and on the small, fictitious, nearby island, Crab Key. On this island lives Dr. No (Joseph Wiseman), a Chinese mad scientist, whose plan is to disrupt an American rocket with an atomic powered radio beam. There you go, parallels between fact and fiction can easily be drawn: first of all, a near-communist organisation is causing America trouble from an island in the Caribbean; in reality, it is Cuba, in fiction it is Crab Key. Secondly, the sabotage of American rocket tests in fiction reflects the importance of the ‘Space Race’ in reality. The fact that the island is radioactively contaminated mirrors the omnipresence of nuclear power in those days. The over-naive belief that radiation can easily be ‘washed off’ – as it is done with Bond and the Bond-girl Honey Rider after they had explored the island – is simply the icing on the cake. This very fact that James Bond, a super-cool secret agent, was so close to these real world conflicts – as if he himself had actually been involved in them – is an important factor for his becoming so popular. The producers of the film must have been aware of this: it is for this reason that the plot of Dr. No, the sixth novel of the series, had been chosen to be turned into the first film: because it fit so well into that period of time.”

In truth, budgetary reasons were one of the known factors in starting the franchise with Dr. No, as well as the legal battle that prevented Thunderball (1965) from being first—but the relevancy argument is certainly valid. The majority of the film is based on an island just south of the communist stronghold of Cuba. The American preoccupation with the USSR throughout the 50s overshadowed any feelings toward their little southern neighbors, but the events of the day shifted attention.

Villanova University writes, “For the first two decades of the Cold War, the communist threat was safely across an ocean. The combination of the Soviets launching their first Intercontinental Ballistic Missile (ICBM), nationalist movements undermining American hegemony in Latin America, and Americans perceiving that their nation was falling behind the U.S.S.R. in the technology race, contributed to the anxiety that the Cold War was coming dangerously close to American shores. The primary threat of Dr. No is the fictional disruption of the contemporary Mercury Space Program, which, while the picture was in production, had not put a man in Earth orbit. Americans were worried about falling behind the Soviet Union, and Dr. No tore at the bowels of Western Society as [he] played havoc with United States Missile tests,’ with his attempts to undermine America’s space program. Furthermore, he was doing so from a hidden base, close to Cuba, in a place where the United States could not interfere without risking another standoff with the Soviet Union. By choosing to adapt Dr. No first, instead of another of Ian Fleming’s books, the moviemakers ‘cleverly connect Bond’s adventure to the real concerns of the American audience about the actual Cold War space race, perhaps making Bond’s story seem more realistic.’” It became grounded escapist fun buried in subconscious realism.

Ringling College of Art & Design continues, writing, “Dr. No is working for SPECTRE in his attempt to bring down US rockets and satellites. Dr. No is also Asian, a far cry for the Anglo-Saxon world that Bond would belong to. This theme is continued in all the Bond films subsequent use of either Russian or Eastern in origin enemies. Definitely, this has all been Cold War influenced. Dr. No is a modern villain and would have seemed more evil at the time because of the recent space race between Russia and the US.”

The evolution of James Bond through the decades has largely been not through character, but through this use of context and resources. His tactics have changed from those in Dr. No to those of modern day, but mainly because of the technology and tools he’s been provided. The attitude of the films and their enemies have graduated with the times and frequently mimic the larger global issues prevalent in the world at the time of their release.

Dr. No started this tradition by rooting its story in the threats of the Cold War, perfectly establishing Bond as a likable character capable of handling the world’s most relevant problems.