When “queerness” isn’t an umbrella term for LGBT, its meaning is best found in spaces and images that resist binary thinking about sexuality. Queerness rejects both the hetero vs. homo opposition and bisexuality, which imply that there are two and only two genders to which one can be attracted. Queerness thus multiplies the options for gender and sexual orientation.

Classic Hollywood cinema, invested in making money and governed by the strictures of the Hays Code, could not offer much in terms of overt portrayals of non-binary sexuality. Innuendo, subtext, and stereotypes did serve to queer things a bit, from the “pansy” figure (as in Edward Everett Horton’s colorful, effeminate, desexualized characters in 1930s Astaire-Rogers musicals) to the dangerous dyke (as in inmates and matrons of B noir women’s prisons, such as 1950’s Caged). 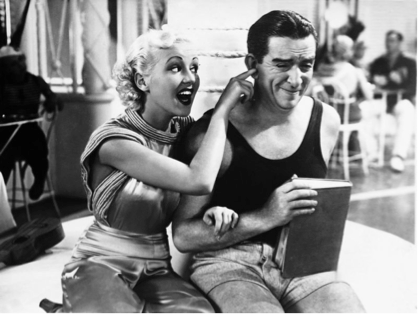 Betty Grable and Edward Everett Horton in The Gay Divorcee (1934) 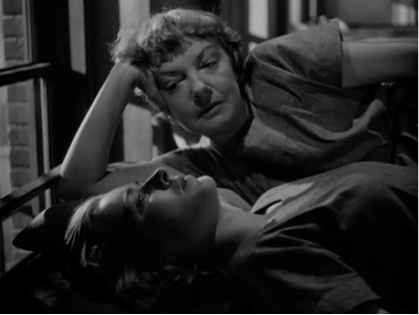 If it’s difficult to find a moderately respectful representation of a lesbian or gay character during Hollywood’s golden age, it’s even more of a challenge to find a truly queer character. There are one or two, however, and my favorite by far is Brian Aherne’s Michael Fane in George Cukor’s box office flop but cult classic Sylvia Scarlett (1935). Following Fane’s character trajectory offers a path to the allure of the queer romance.

The titular character has received the most attention from fans and critics, who show ample interest in Katharine Hepburn’s becoming a “he” called Sylvester for much of the film. Because the character isn’t allowed to just be trans (a departure from the relevant chapters of Compton MacKenzie’s 1918 novel, The Early Life and Adventures of Sylvia Scarlett, on which the film is based), we see her decide to dress as a man to avoid being left behind by her ne’er-do-well father (Edmund Gwenn). The film’s queerness emerges most in scenes with gay and lesbian overtones, such as when Cary Grant’s conman Jimmy Monkley calls Sylvester a “proper little hot water bottle” when they share quarters. Although we know Sylvester is really Sylvia—and that both are Katharine Hepburn—Monkley does not, so the gay overtones are clear. In addition, the passionate kiss planted on Sylvester by the bawdy and flirtatious Maudie Tilt (Dennie Moore) offers lesbian pleasure to those viewing who know, unlike Maudie, that two women are kissing. 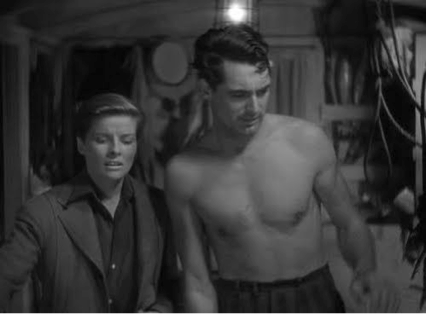 Katherine Hepburn, disguised as a man, with Cary Grant in Sylvia Scarlett (1935) 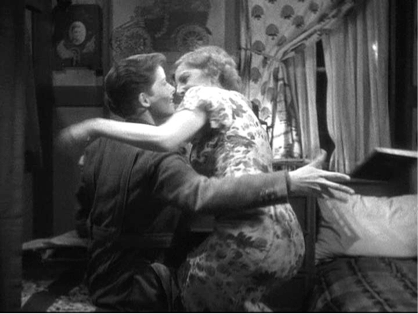 Katherine Hepburn, disguised as a man, being kissed by Dennie Moore in Sylvia Scarlett (1935)

If both characters knew Sylvester was a “disguise,” there would be overt queerness rather than innuendo or subtext in the interactions. And we couldn’t have that. Or could we?

Enter Brian Aherne as bohemian artist Michael Fane. Michael is a handsome womanizer whose life is turned upside-down after seeing Sylvester performing in a traveling theater troupe with Monkley, Maudie, and her father, as “The Pink Pierrots.” If the troupe’s name alone isn’t a queer enough hint at how gender and sexuality are played with in the film, Michael’s confusion over his attraction to Sylvester surely is. In one scene, Sylvester comes in through Michael’s window in the wee hours to apologize for slapping his arrogant girlfriend Lily Lavetsky (Natalie Paley), who was mercilessly taunting Sylvester’s alcoholic father. After puzzling over his attraction, Michael declares, “I know what it is that gives me a queer feeling when I look at you.” Unwilling to see beyond heteronormativity, he decides his strange feeling is simply the need to paint Sylvester’s portrait, but we who know the ending of every Hollywood romantic comedy suspect something more—or something else—is going on. 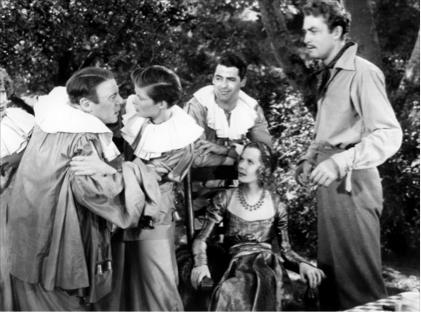 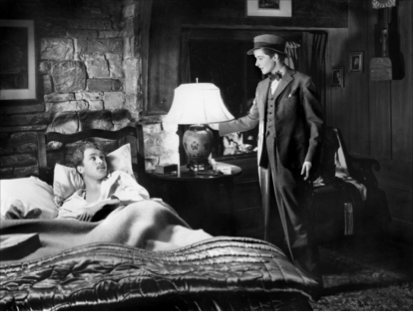 What keeps the film from sliding fully into heteronormative happily-ever-after is how the four central characters end the film. Holding onto that “queer feeling,” we watch as Monkley is the first to declare affection when he learns that Sylvester is (also) Sylvia. He seems even turned on by the reveal. By contrast, when Sylvia presents Michael with the “truth” (herself in a dress and hat she snatched from a woman bathing in the ocean), he laughs at Sylvia’s inability to perform proper femininity after her stretch at playing Sylvester. She sits with her legs wide apart and even pushes him away with a loud “Chuck it, I say,” when he tries to kiss her. He clearly identifies her crossdressing as a youthful prank, linking Sylvia with immaturity (that he is not unwilling to take advantage of) and Lily with sexually (if not socially) mature womanhood. Meanwhile, Lily draws her own conclusion about the transformation: it is a clever trick by Sylvia to woo Lily’s plaything, Michael, away from her. Michael thus emerges the least queer character of the four, but the film doesn’t end with Michael’s rejection. Apparently, he, and not Sylvia, has more to learn. 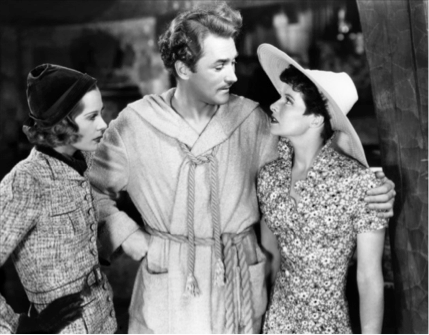 The final scenes, I contend, use Michael’s self-delusion to woo the audience into attraction to trans identity and queer sexuality. Although some fans argue Sylvia would have been better off with Monkley—who is drawn openly to both Sylvester and Sylvia—this is not what transpires. Monkley is a crook and likely incapable of fidelity of heart or pocketbook. Hence, Monkley ends up with Lily in a comical, bickering romance of selfish souls.

As for Michael, neither humble Sylvia in a dress nor arrogant Lily with her furs ultimately wins him. During a train adventure in pursuit of Lily, who has been “kidnapped” by Monkley, Michael at last realizes and declares his love to an androgynous Sylvia in unstyled short hair and an overcoat. In the end, Sylvia/Sylvester demonstrates the allure of non-binary gender roles, while Michael, the film’s most dynamic character, transforms from an un-self-aware playboy into a man of more flexible desire and openly queer attraction—a character worthy of a happily ever after with our unique hero/ine.