Quick Answer: New Marvel/Netflix series Luke Cage is both progressive and regressive in its race politics. Its predominantly black and brown cast – including women in strong roles – and black male lead offer challenges to the whiteness of superhero media, while its violence, criminality, and driving soundtrack hearken to the romance and racism of Blaxploitation.

In making a pitch for Harlem gentrification, Councilwoman Mariah Dillard (Alfre Woodard) of the new Marvel/Netflix series Luke Cage says, “For black lives to matter, black history should matter.” That she is a lying, avaricious villain who condones and commits murder tempers how we take her progressive political statement. Certainly, the series is invested in black history, from a conspicuously placed copy of Ralph Ellison’s The Invisible Man among Luke Cage’s (Mike Colter) belongings to the history of the Marvel comic book in which Cage first appeared. Blaxploitation and late-twentieth-century black cinema—including Spike Lee’s Do the Right Thing (1989) and Mario Van Peeble’s New Jack City (1991)—are also important parts of black history, too, and therefore part of how and whether black lives matter today. Luke Cage shows investment in all of this history and more. 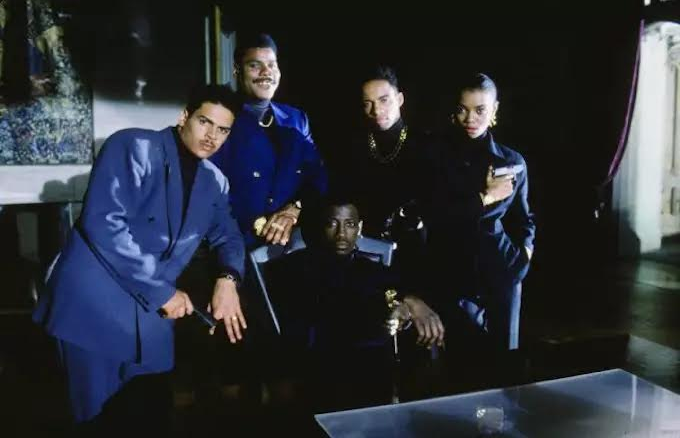 Within reviews and commentaries largely written by white critics (including this one), there is an awareness that Luke Cage offers an engagingly multifaceted take on blackness and the African American experience. Jack Hamilton argues that “the preponderance of black and brown faces on Luke Cage offers a welcome reprieve from the rather overwhelming whiteness of a lot of superhero fare.” More awkwardly, critics say the series is “smooth and deliberate,” “filled with colorful personalities” and has a “unique flavor.”

Universally praised is that the series is centered in Harlem. Allison Keene expresses the popular perspective that “Race matters in Luke Cage, but most especially in the way that the show fully embraces its Harlem location with style and substance. There’s an intimacy of place here, and it extends to all corners of the series in cultural specificity and details.” Eric Eisenberg recognizes that, for the diverse cast of criminals, police officers, shop owners, and bystanders, “The common denominator between all of these key figures is the neighborhood of Harlem, which effectively finds a way (for better or worse) to drive the blood through their veins, and lends Luke Cage an aesthetic that is uniquely created as a result of having a predominantly black cast and showrunner.” Within this context, Keene concludes, “The idea of Luke Cage not just as a hero, but as a black superhero, is important here.” 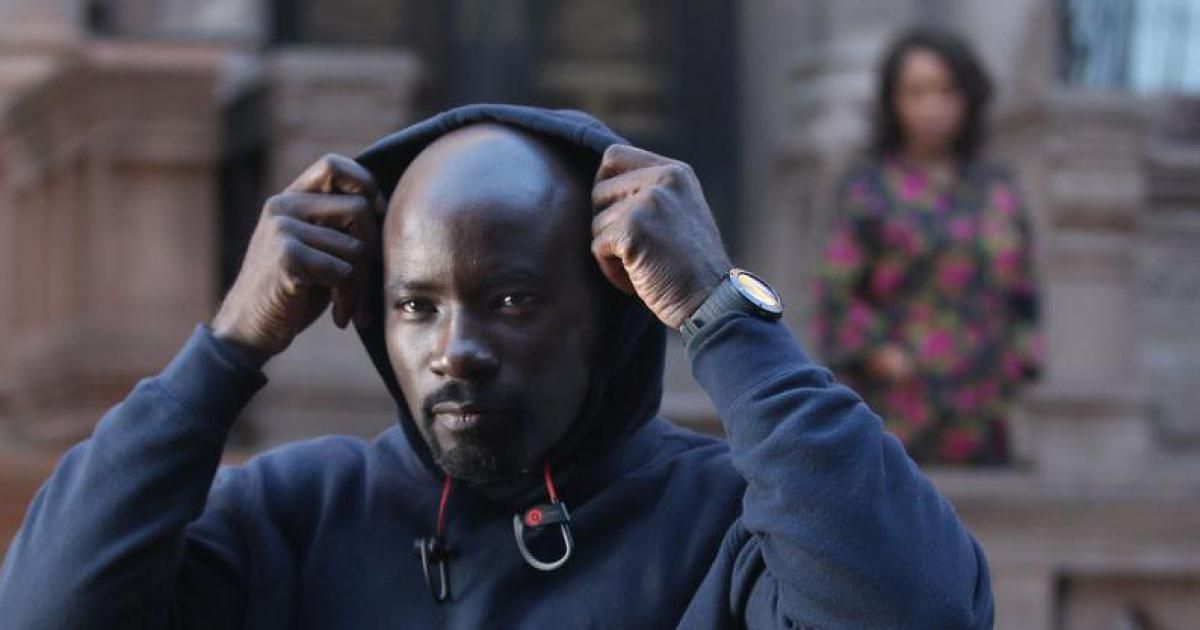 How the series signifies superheroic blackness is also a worthy subject of consideration. Cage’s costume, for instance, is a hoodie. As Joanna Robinson comments, “Cage dons a hoodie just as Batman would put on a cowl or Thor would don a cape. But in a post-Trayvon Martin world, that image—of Cage pulling the hood tight around his face—is a loaded one. And all of this imagery comes in a series that centers on Luke Cage’s wrongful imprisonment.”

Cage also hates guns. Keene notes that “one of the great delights of his fight sequences is not just the physicality he uses to overpower his foes […], but also in how he pointedly destroys their firearms as he goes. As he tells Pops, ‘a man with a gun has no father.’” Luke Cage’s weapon is his own black, bullet-proof skin, signifying bodily (as did the original Marvel comic book character on which Netflix’s series is based) that race does matter. In the context of racial conflict in America, series creator Cheo Hodari Coker states with confidence, “The world is ready for a bulletproof black man.”

Coker is not only the series creator but a well-known hip-hop journalist. He wrote the definitive biography of Biggie Smalls that became the biopic Notorious (2009). Black music of multiple genres infuses Luke Cage’s Harlem with cultural richness as well as Blaxploitation echoes. Soundtrack songs and featured live performances at the Harlem club central to the series are highlights, and the show’s score, by Adrian Younge and Ali Shaheed Muhammad and orchestrated by Miguel Atwood Ferguson, offers a unique and driving force for the series. “One of Luke Cage’s greatest triumphs is its use of music,” argues Hamilton, “which resonates more prominently and energetically than in any previous Marvel screen property. […It] evokes the greatest scores of classic Blaxploitation while still managing to sound current and fresh.” 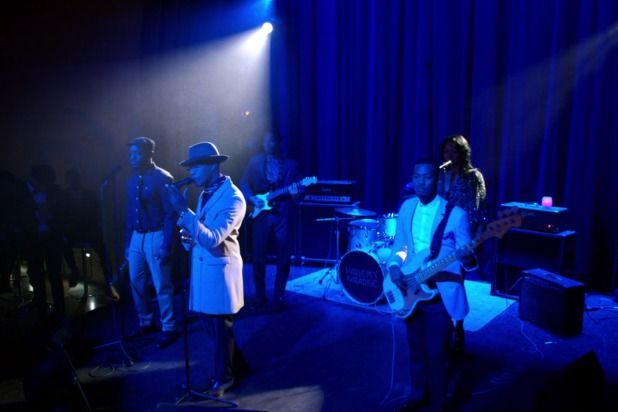 Of course, Blaxploitation was largely a creation of the white imagination and linked black male power with violence, criminality, hypersexuality, sexism, and homophobia. Luke Cage actively endeavors to separate itself from this history through such elements as its anti-gun hero, its strong black women characters, and its attention to black characters of diverse age, experience, and economic class. Nonetheless, criminality and violence still dominate the screen images. Ultimately, we might conclude with black novelist Walter Mosley (one of whose books also appears among Luke Cage’s belongings) that traces of Blaxploitation are unavoidable in a show about a black superhero: “I was a fan of it [Blaxploitation] because I had no other choice. It wasn’t like that kind of entertainment was gonna come from some other place.” To make the best use of the inescapable, Coker celebrates the genre’s action and charismatic music in Luke Cage.

A final question critics tackle in relation to the series is its language, particularly the use of the “N-word.” Should a series invested in contemporary race politics and black empowerment use street slang and slurs, as did the original Marvel Luke Cage comic book? The complexity of who may or should use the “N-word” and who should not is beyond the scope of this review, and critics tend to pose the question more than answer it. For example, Abraham Riesman asks Walter Mosley the following about the original comics: “Somewhat infamously, the series featured hokey and borderline-offensive replications of urban black patois. Did that stuff turn you off?” Mosley replies, “I thought Marvel had taken a big step in doing Luke Cage. They were trying to open a door, and they did open a door. Over the years after that, a lot of black people went through that door. To write comics, to draw comics, to manage the comics. It was great. It was wonderful. So, no, I didn’t have problems.”

Hence, Mosley gives a similar answer to the question of how, says Riesman, “morally compromised characters use the N-word, but Luke himself derides it as something to be ashamed of.” “This political-correctness thing, it’s so interesting,” replies Mosley. “Inside the black community, you have the fellas who’ve appropriated the word, but then you have people from another generation who think the word is terrible and it’s awful and you should never use it. Cheo [Coker] decided, ‘Well, I’m gonna be the one to use it.’ I think it’s great.”

In his interview article, Riesman cites black critic Justin Charity as one dissenting voice among all the praise for the series. “For a character that series creator Cheo Coker has explicitly linked to the #BlackLivesMatter movement,” states Charity, “Cage spouts some surprisingly conservative undertones and mantras.” He continues, “He’s gorgeous, but he’s not charismatic, nor is he a particularly uplifting superhero. And he damn sure isn’t the contemporary civil rights avatar that we seem to have been promised.” 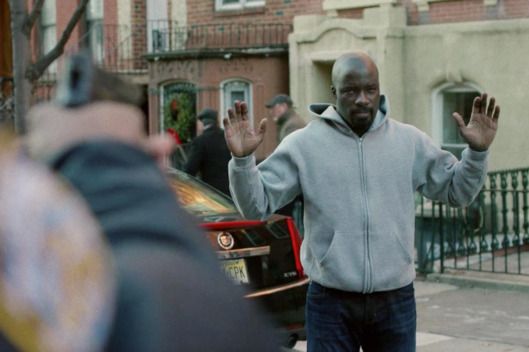 To clarify the failed promise of the series, Charity argues, There is no stark philosophical contrast between villain and hero. […] Cage, Stokes, Dillard, and Pop are all nostalgic for an older, respectable Harlem, where, in Stokes’s recollection, “people walked old ladies across the street.” This sentimentalism is so pervasive, and so bipartisan, that the beef between Cage and Stokes gets rather ambiguous. Theoretically, Cage does battle with Stokes and Dillard to determine the future of Harlem, but Cage doesn’t seem to believe in anything that’s more or less honorable than Stokes’s simple plan to keep his money clean and his nightclub humming. Between Pop’s swear jar and Cage’s pat distaste for “that word,” these characters are largely defined by bits of trivial repression that Coker drives home with more gusto than he does any plotline.

Most persuasive in this critique is its emphasis on bipartisanism. Success for Marvel, Netflix, and Hollywood, in general, is based on revenue. If Luke Cage pushes the envelope with its black superhero and predominantly black supporting cast, it hedges its bets via generic traditionalism. Coker calls the show a “hip-hop Western,” and the label fits. Lots of action, a lone, reticent hero and a funky fresh soundtrack that ably distracts viewers from any moments that smack of too much or too little #BlackLivesMatter politics. Luke Cage may or may not be the hero we need, but he speaks loudly to the complexity of race politics today.