How does “Marvel’s Jessica Jones” fit into a neo-noir superhero genre?

Marvel’s Jessica Jones (2015) is based on a Marvel character who first appeared in the comic “Alias #1” in 2001. According to Marvel, she has “superhuman strength” and an “enhanced resistance to physical injury, although she is unsure of whether or not she is bulletproof.” Marvel credits her as only a “reasonably skilled detective and hand-to-hand combatant.” More significantly, what makes Netflix’s latest endeaver in the Marvel universe unique is not Jones’ superhuman powers but her vulnerabilities. The show is conceived with a stark, neo-noir sensibility propelled by a strong female lead.

Neo-noir is characterized by all of the traditional attributes of film noir — a troubled protagonist facing difficult or impossible choices — but with updated content and circumstances. Putting a Marvel superhero, particularly a female superhero, into a noir setting qualifies as a modern twist. Netflix and Marvel first opened the door to the neo-noir world meets comicbook genere earlier this year with Daredevil (2015.) Now Jessica Jones will develop this idea by bringing its dark, troubled hero to the streaming service. 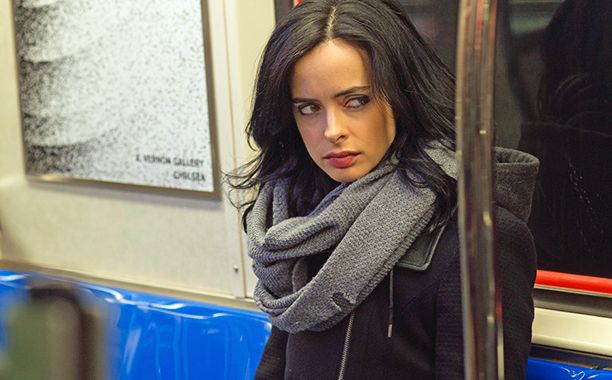 The set up is pure detective noir, but, as Mary McNamara wrote in her review for the LA Times, “There are cases to solve, but Jessica Jones is not a detective procedural, because Jessica Jones is not hard-boiled. She is scarred.” Jessica is battling not her super abilities, as is often the narrative for the superheroes forced to live amongst us mere mortals. She is fighting to pull herself out of the wreckage of a controlling and abusive “relationship” with the evil villain Kilgrave. Krysten Ritter has played damaged before, in the teen-noir cult favorite Veronica Mars on TV (2004), in the corresponding film (2014), and as Jane on Breaking Bad (2008). This experience will help her to project a strength and confidence for Jones that doesn’t entirely mask a broken, vulnerable core. Ritter has proven she is believable as both a heroine and an anti-heroine.

It has been said that one of the unifying traits of noir, and therefore neo-noir, is that once a character steps off the straight and narrow, she discovers that there is no floor. There is nothing to stop the fall and the descent further and further into her own brand of conflict.

Melissa Rosenberg, Jones’ showrunner, took her cues for the show from the original comic. “Well, the comic book was the first comic book Marvel had ever put out that was an adult R-rated book, so I started with that,” she told Deadline. “When I was creating the series, I just started with that tone, and that edge, and it just kept going.”