Quick Answer: Last Shift is primarily a one-woman show. With that limited point of view, we’re never sure whether we are witnessing the effects of full-on supernatural activity, or the hallucinations of a psychologically-tormented woman. The film’s structure and style consistently teeter the line between convincing the viewer one way or another, resulting in a nice blend that makes for an endlessly chilling and suspenseful film.

Effective suspense flows from a fear of the unknown. Finding oneself unaware of what lies ahead creates unease and dread. Whether or not a horror film can effectively achieve those sensations is what determines its success or failure. And producing those emotions through new and innovative techniques is the biggest challenge of any horror filmmaker creating content in a genre oversaturated by repetitive and trite methods.

Last Shift (2014) follows rookie cop Jessica Loren (Juliana Harkavy) within the confines of a defunct police station. The rest of the police force is stationed across town in a new building, leaving her to stay the night alone as she awaits the arrival of a hazmat team coming to gather soiled case evidence for disposal. Of course, as the night pushes forward, it becomes increasingly evident that she isn’t alone at all—some manner of demonic spirits remain in the old precinct. What’s worse, they may possess a personal connection to her own past. As she fights against the supernatural and questions her own mental state, we find her character in a constant struggle with what’s real, what isn’t, and what it all means.

Is Last Shift, then, a supernatural horror in which a woman is assaulted by demonic spirits? Or is it a psychological horror in which a woman is cracking under the pressures of her own brain, envisioning things that aren’t there? The answer is yes to both—and by design. Last Shift carefully teeters on the cusp of fully convincing us one way or the other. Everything appears supernatural in nature, but the film’s narrow point-of-view is presented through Officer Loren alone, with no other witnesses to her experiences save for a single extra character present only in the first and final minutes of the film. It’s not inconceivable that everything is in her head. It’s not even inconceivable that the other officer has something to do with it, or at least knows what is happening to her.

The film is a haunted house story within the labyrinthine white corridors of an outdated police station, which spiritually harkens to John Carpenter’s iconic Assault on Precinct 13 (1976). When officer Loren first arrives on duty, she’s greeted by the erratic behavior of the aforementioned older officer who, after screaming and punching a wall, oddly asks her to turn around. He shows Loren the evidence room and its biohazard contents, instructing her to wait until 4am when they are collected for disposal, and stressing how important it is that she not leave the building. The evidence is nothing special, he says, just old bloody gloves and junk from various crime scenes. What he excludes is that much of it is from a particular cult murder—the very crime which killed Loren’s cop father—and which was brought to rest when the convicted cultists hung themselves in the precinct’s holding room. 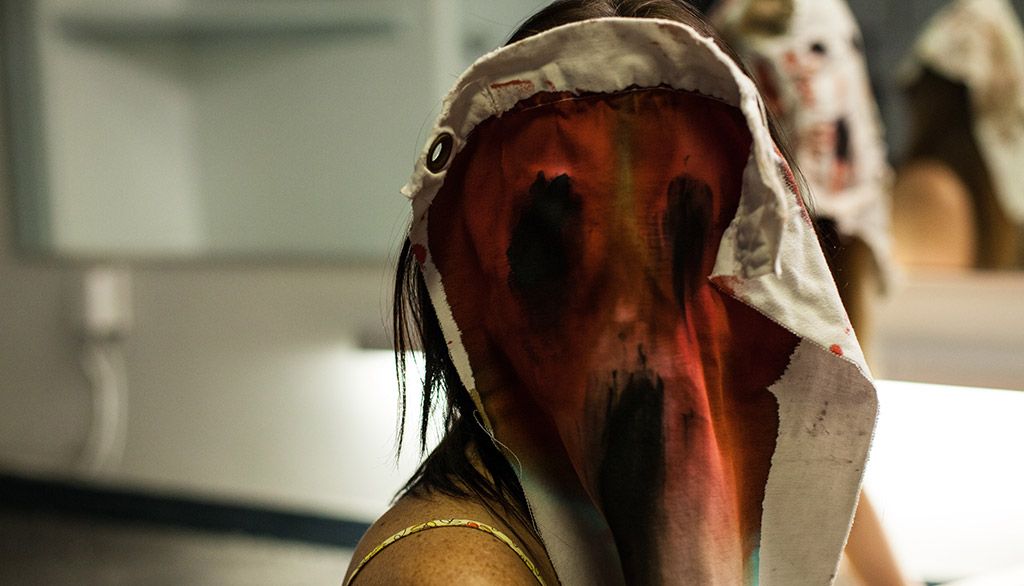 A ghoulish figure in Last Shift

As the night unravels, Loren experiences plenty of seemingly supernatural phenomenon. Locker doors open themselves, dozens of chairs stack themselves in the span of a second, filing walls move on their own, the power goes out, words are written on the ceiling, the bathroom erupts filth all over itself, photos of dead bodies emerge and disappear, and there’s the fact she sees copious amounts of demons and visions of death and murder all over the building. Meanwhile, she has a homeless guy locked in a cell who stopped by to urinate in the foyer, and who appears to witness the same inexplicable disturbances as she. 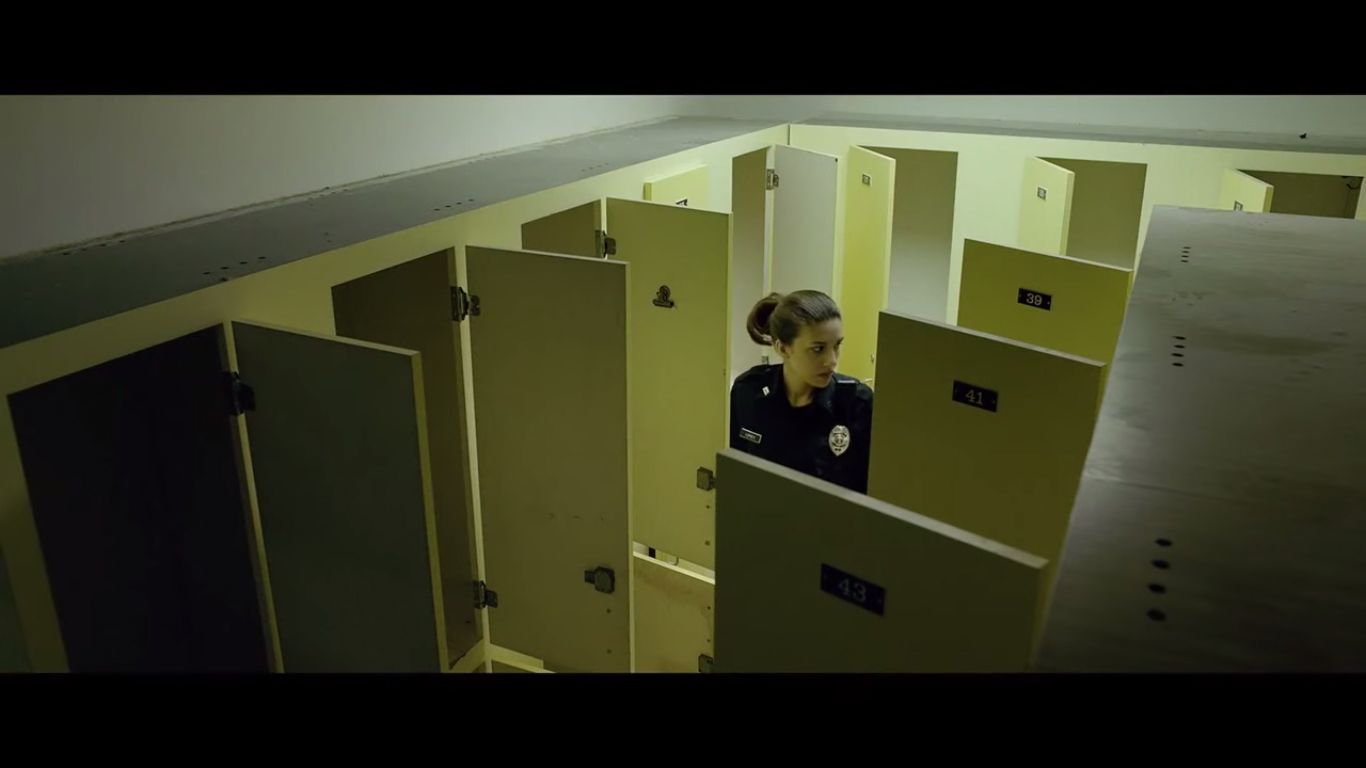 When a fellow policeman comes to check on Loren mid-way through the night, the two have a nice discussion about the job, her past, and sanity. But when the cop turns to leave, he reveals the back of his head is missing from a gunshot wound. It turns out he was a fellow officer of her father’s, and was also killed on the night of the cult murders.

And of course, despite the fact all 911 emergencies were rerouted to the new station, Loren receives repeated calls from a girl claiming she’s been captured by someone where people are being murdered. A girl who is a victim of the cultists and died a year ago. It’s another instance of the precinct haunting her.

But again, we’re witness to all these possessions through Loren’s eyes. Last Shift is mostly a one-woman show with Harkavy responsible for the whole performance. We’re seeing what she sees—so what if she isn’t seeing anything at all? What if the homeless guy wasn’t even there? What if, all night, she’s just been running amok in the precinct tormented by her own brain? 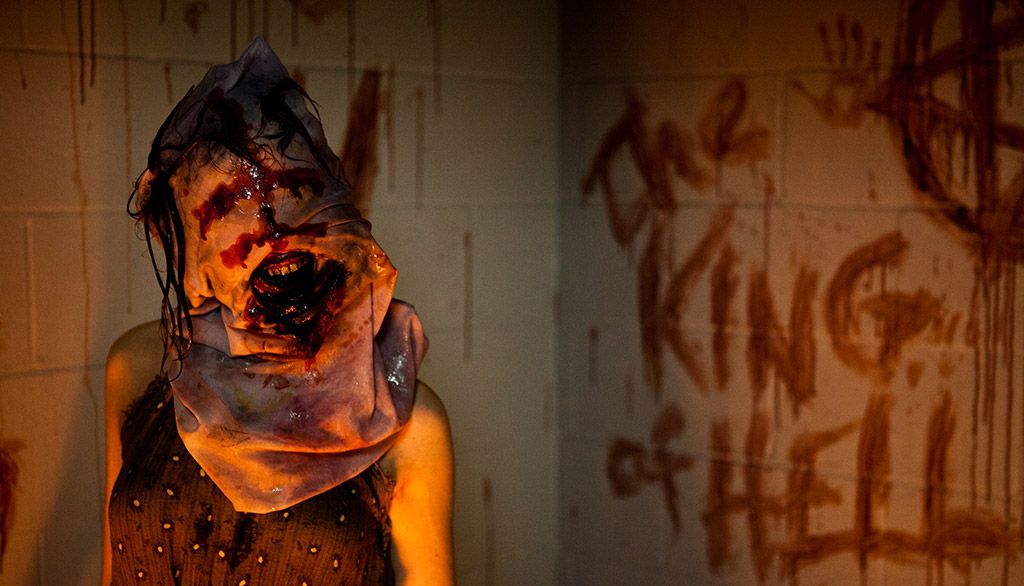 One of the supernatural frights

The film’s ending finds Loren in a shootout with members of the cult who, she believes, have come back to claim her as their next victim. Only, once the firefight is over, we find that it wasn’t demons but the hazmat team come to dispose of the evidence. Loren is shot by the old cop after he walks in to find her firing on the innocent workers, but not before we’re shown a final image of demonic influence hover over her. The film’s method of blending lucidity with supernatural images builds the double-ended nature of Loren’s visions. We’re left not sure what to believe.

Perhaps the distinction is unnecessary. Even if it all happens in her head—that is, if someone else walked in on her they may see a woman flailing about empty hallways—could it not still be supernatural influence causing her to witness what she sees? Is it unacceptable to think that her psychological break is the product of supernatural force? The two don’t necessarily have to be distinct. 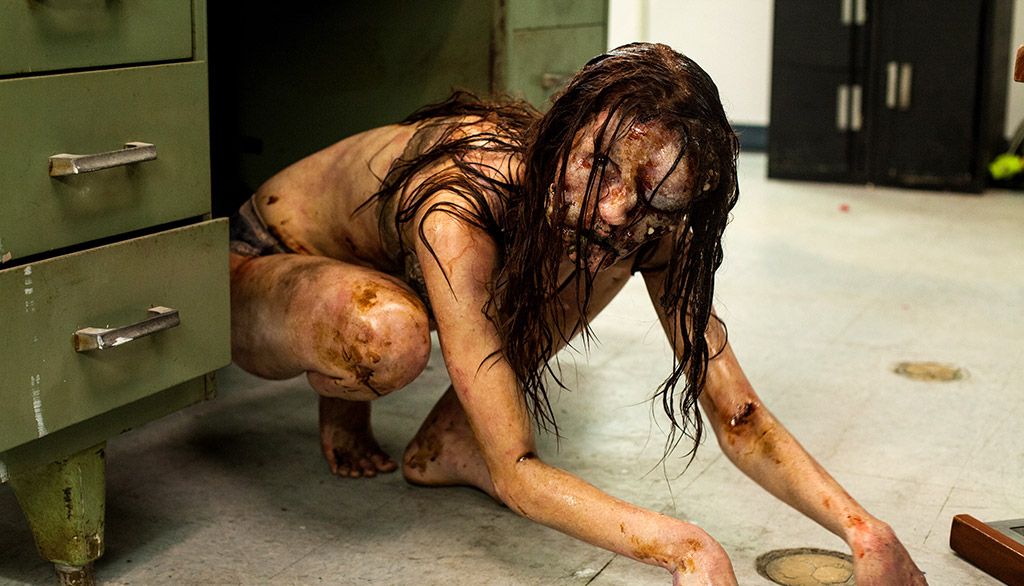 Another of the film’s terrors

Last Shift’s frights start small, in the form of locker room doors quietly opening when Loren has her back turned, ramping up to blatant supernatural presence and the full-on massacre of a number of people. If one accepts the foundational premise that the supernatural is a possibility, both components exist. Throughout the story, careful consideration is given to the details, and few points are overwhelming enough on their own to definitively say whether Loren’s experiences are fully supernatural or psychological. The film’s strength, and the source of its successful suspense and dread, are the way the two aren’t mutually exclusive.