The climax of Rosemary’s Baby (1968) isn’t frightening because of its Satanic payoff, but because of the way Roman Polanski’s artful presentation of details finally reaches a head. The film’s horrific tone comes in its minutiae, nestled in an atmosphere of slowly increasing paranoia. Every moment the viewer spends doubting Rosemary’s sanity they equally share her growing sense of panic, endlessly teetering between designating her a loon and wanting to protect her. There are no big jump scares or hauntingly chilling moments. There’s no violence or supernatural freakouts with beasts lingering in the corner. Rosemary’s Baby is much more subtle with characters, and the film’s believably frightening series of events that transforms regular humans into vessels for evil.

By the time it happens, the reveal at the end of Rosemary’s Baby is expected. Though we carry doubts along the way, evidence piles up that something is abnormal. Rosemary’s pregnancy isn’t being handled in a manner that makes any sense. As Roger Ebert said in his review, “When the conclusion comes, it works not because it is a surprise but because it is horrifyingly inevitable. Rosemary makes her dreadful discovery, and we are wrenched because we knew what was going to happen—and couldn’t help her.”

The New York Times furthered that sentiment, saying, “Miss Farrow is quite marvelous, pale, suffering, almost constantly on-screen in a difficult role that requires her to be learning for almost two hours what the audience has guessed from the start.”

Roman Polanski’s adaptation of Ira Levin’s novel takes a naturalistic approach to building terror. Though Rosemary’s affliction turns out to be otherworldly in nature, the tumultuous process of getting her to that point is undeniably believable. Deep Focus Review remarks on this, saying, “Polanski preserves simultaneous belief and distrust toward the situation; he whirls about confirmations and denials for every lurid possibility. From muffled sounds heard through the walls in dreams to the genial dispositions of his characters, even the evil ones, the viewer second-guesses themselves and the protagonist throughout, until, of course, Polanski confirms our misgivings.”

The happy couple of Rosemary and Guy (John Cassavetes) is introduced as any pair of 1960s young lovers might: He’s struggling to make a name for himself, she’s busying her days with home duties and thoughts of motherhood. It doesn’t take too long for them to meet their eccentric older neighbors, Minnie (Ruth Gordon) and Roman (Sidney Blackmer) Castavets. An awkward dinner date with bad food, conversations about the phoniness of religion, strangely personal inquiries about Rosemary’s personal health and family fertility, and stories of global travel kicks off what becomes an incessant friendship. And in a scene that’s near-missable upon first viewing, wherein Guy and Roman have a private conversation as the women are elsewhere, is likely the start of the dark and Satanic chain of events that launches Guy’s career forward and manipulates Rosemary’s pregnancy over the next nine months. 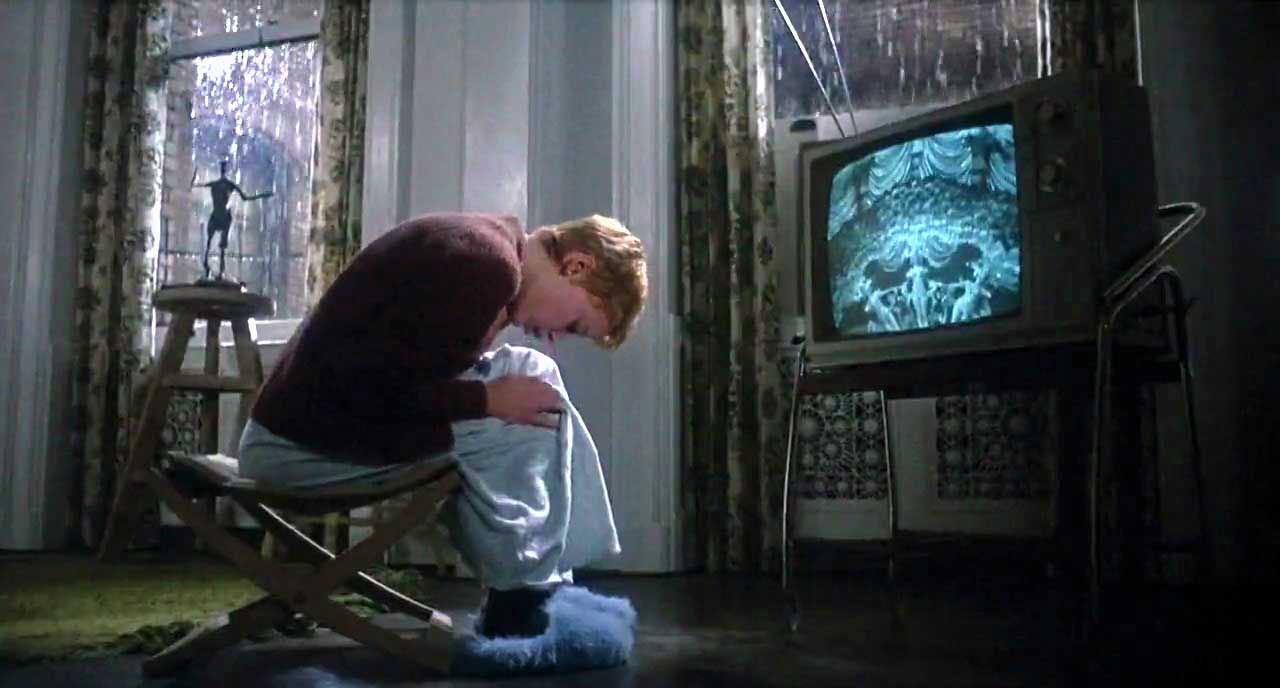 Details become the film’s constant push, however minor. Most of the story is spent conveying minor details that hint to the ending. Guy & Rosemary’s friend Hutch (Maurice Evans) warns them of the many nefarious details from their apartment building’s past. The Castavets seem nice, but their geniality comes with constant suspicion. Guy seems like a stand-up fellow, but his increasing distance from Rosemary and denouncement of her pregnancy concerns don’t befit the mannerisms of a loving husband. And smaller things - like discovering a secretary covering a closet door, a random suicide, scribbled notes - all add to the curiosity. Add to that Polanski’s wonderfully-executed dream sequences, featuring scenes and events that have nothing and everything to do with the reality of Rosemary’s Satan-rape, operate with the same fluid absurdity of real dreams. What’s true and what’s imagined become blurred, and the lasting result is a sense of dread that is hard to accept because of its source.

Further, the film keeps the viewer in flux as to Rosemary’s hysterics. Is she (and Hutch) filling her head with crazy ideas, or is something sinister going on?

Deep Focus Review continues, saying, “Realistic mise-en-scène shrouds the elements of horror in a Roman Polanski film, so that which remains suspect also feels too real to possibly delve into horror territory. His scares arise not from supernatural origins, but from psychological possibility—the horrible things people will do if so compelled.”

That’s the power of Rosemary’s Baby. It’s plausible. People can fathom the idea of a personal conspiracy. Rosemary says it herself - “There are plots against people, aren’t there?” Though Guy didn’t seem to be at the edge of desperation one might think a person would require to make a pact with the devil at the expense of his wife’s life and sanity, there’s an understandable truth to people going to extremes to ensure areas of their lives improve.

When the film finally confirms its suspicions, it turns out Rosemary (and Hutch) were right all along. It would be anticlimactic if it weren’t so refreshingly well-crafted. Polanski’s decision to not show the baby, instead relying on Rosemary’s tortured face when she sees the demon child, is paramount to the film’s success. The terror lives on as an intangible mystery. It’s up to the viewer to imagine what the child looked like, dark-eyed and claw-handed, shrouded in a black veil in a room full of people chanting “Hail Satan!” and “God is dead!” It’s those same people, the characters we’ve loved but questioned throughout the film’s duration, who brought this fate upon Rosemary. Evil becomes characterized by humanity; an approachable and powerful evil. It’s fitting that a film focused on believable terror finds its villain within humanity and religion.

After seeing Rosemary’s Baby once, when that apprehension and doubt felt the first time no longer exist, repeated viewings offer greater subtext and nuance. Evil strikes in every scene, through every action, and it becomes clear how well-constructed the film is towards creating terror that exists mostly in the mind. It’s for this reason that Rosemary’s Baby exists as a classic entry in cinema’s history, and a bold horror film that has been referenced and homaged for decades.