Is a female gaze possible in cinema?

The question of whether a female gaze exists in opposition to the male gaze posited by Laura Mulvey in “Visual Pleasure and Narrative Cinema” arose immediately after and in direct response to that article’s publication in the pages of Screen in 1975. If men, both onscreen and as producers, held the active roles and rendered women the fetishized or punished objects of the gaze in traditional narrative cinema, could feminist filmmakers create a film space in which women looked back? And what of lesbian viewers and people of color within this implicitly heteronormative, white configuration? Within a patriarchal culture’s images and narratives, is every viewer necessarily subject to the male gaze?

Because the male gaze articulates the perspective of a male-dominated cultural status quo, one answer to the question of the female gaze is that it does not and cannot exist. A female-dominant culture would have to exist in order to theorize such a gaze, or at least a truly egalitarian one. Such a perspective renders women viewers masochists, learning to objectify themselves and suffer punishment when they challenge traditional feminine norms of appearance or behavior, from beauty norms and sexual orientation to taking the active role in a narrative.

But, of course, women do watch films and we do resist sexist storylines and visual norms. For example, in the chapter “The Oppositional Gaze” in her book Race and Representation, bell hooks posits that black women are always resistant viewers. They have most often been either entirely absent from classic cinema or placed in roles that deny them agency and even the masochistic pleasures of objectification. This historical experience renders black women participants in what hooks terms an “oppositional gaze.” Of course, this is a generalization, for an oppositional gaze requires active engagement with the film text, and denial of realities in favor of fantasies is part of the power of racist patriarchal hegemony. In the collection In Search of Our Mothers’ Gardens, Alice Walker, for instance, shares a story of the television viewing experience of her mother, who worked as a maid, but identified with the rich white women of soap operas instead of their black maids. Such an example illustrates that one may identify in accordance with a dominant gaze rather than oppositionally, even when it is against one’s best interests politically.

Nonetheless, the concept of an oppositional gaze is vital to exploring the race, class, gender, and sexual elements of the male gaze. If heterosexual women of color can watch films with a critical, rejecting eye related to race, then what happens when lesbians experience heteronormative images and narratives? A lesbian gaze could allow for identification with the male gaze in the desire for the female object of the gaze. For instance, a lesbian (or bisexual) viewer might desire Marilyn Monroe rather than want to be her. This would not, however, actively challenge the male gaze in its objectification of women. Further, traditional images of lesbians have not challenged the gaze. Cinema has historically vilified the lesbian as either an anti-social monster or a psychologically disturbed individual needing to be brought into the heterosexual fold by the right man, as seen in films from The Children’s Hour (1961) to Heavenly Creatures (1994) and Monster (2003). Similarly, mainstream pornography is dominated by the male gaze, where women may engage in sexual acts together, but they do so while men (in the film and in the audience) watch. Even when the male gaze is not as obvious as it is in pornography, the fetishization of women’s bodies persists as a dominant visual technique. Examples include the arguably objectifying sex scenes in Blue is the Warmest Color (2013) and even in Deepa Mehta’s otherwise actively feminist film Fire (1996), in which Indian sisters-in-law experience desire with each other that is absent from their patriarchal marriages. The film’s romantic music, languid touching, and billowing draperies echo conventional sex scenes under the male gaze and even produce unwanted arousal in the elder woman’s husband when he witnesses it. 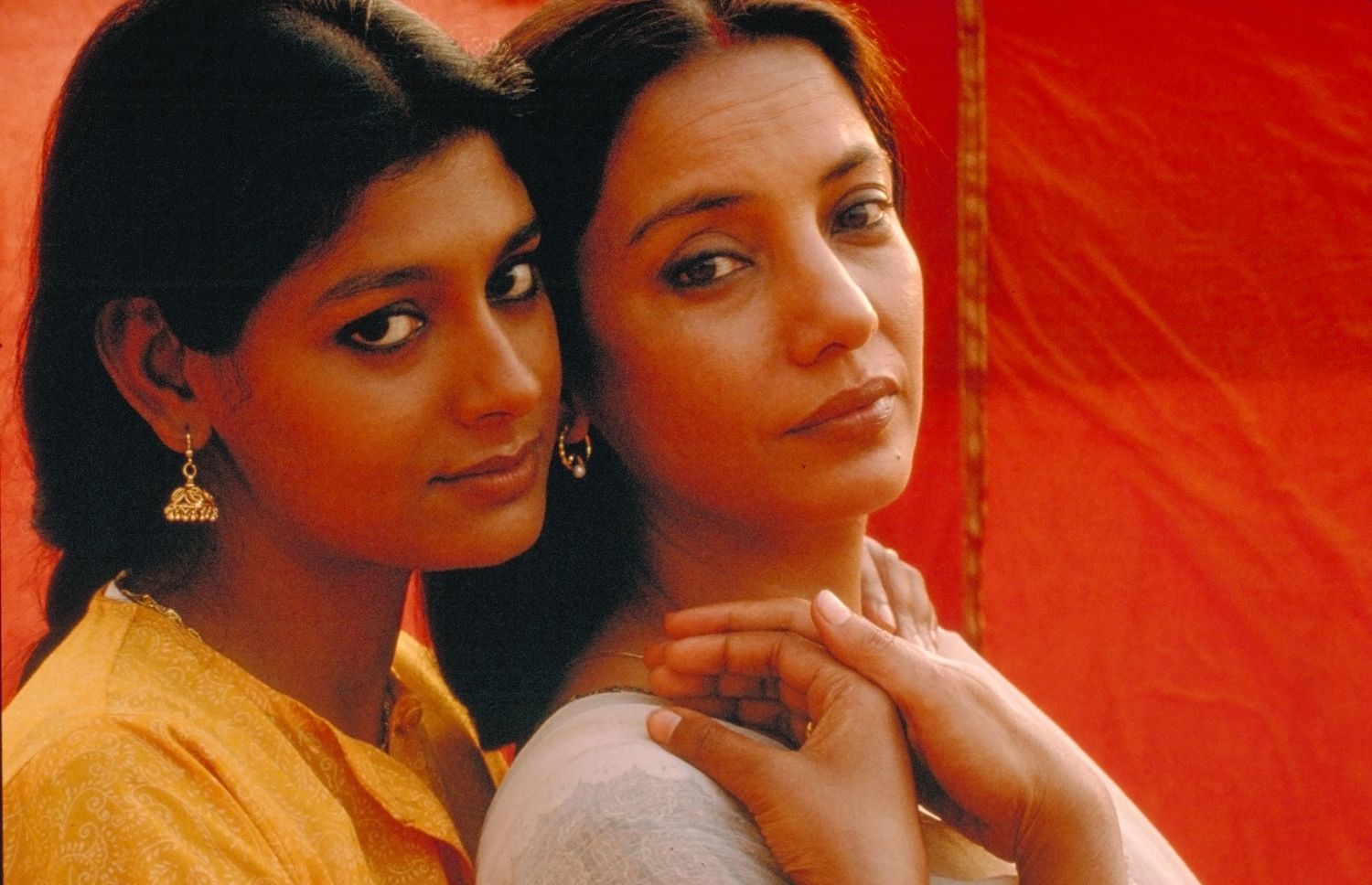 The cultural realities which have rendered the male gaze dominant mean that actually reversing the gaze is difficult to conceive. Revenge narratives, for example, may give temporary pleasure, as in Tarrantino’s Kill Bill (2003), in which a woman known only as “The Bride” (Uma Thurman) seeks vengeance upon the team of assassins who betrayed her. Despite the fact that the character is an assassin, a traditionally masculine activity, that she was a bride and pregnant at the time of her shooting emphasizes that her retaliation is based in traditional feminine norms. Additionally, this active, violent role does not prevent visual objectification of Thurman, particularly in the first part of the narrative. The film opens on her passive, panting body, and her punishment for having chosen traditional femininity and pregnancy over her former assassin’s life. Though women are more generally punished for attempting to attain masculine power, in this case male control is simply over all choices a woman makes. The Bride must die for her transgression. Of course, she does not die, and her role becomes a very active one. Nonetheless, the casting of former model Thurman and many tightly framed fetishistic shots of her blonde, fit, slim appearance keep the actress objectified even as the character challenges male dominance. Her phallic sword symbolizes this double-edged representation perfectly.

Similarly, turning men into sexual objects cannot overturn the entirety of social norms, and men are rarely positioned—within narratives or as images—the way women are. Most often, the sexualized male body is also an active, powerful body, and he is usually the center of the narrative. From James Bond to Magic Mike (2012), when mainstream cinema gives us the sexy man, he is dominant or powerfully muscled or both. 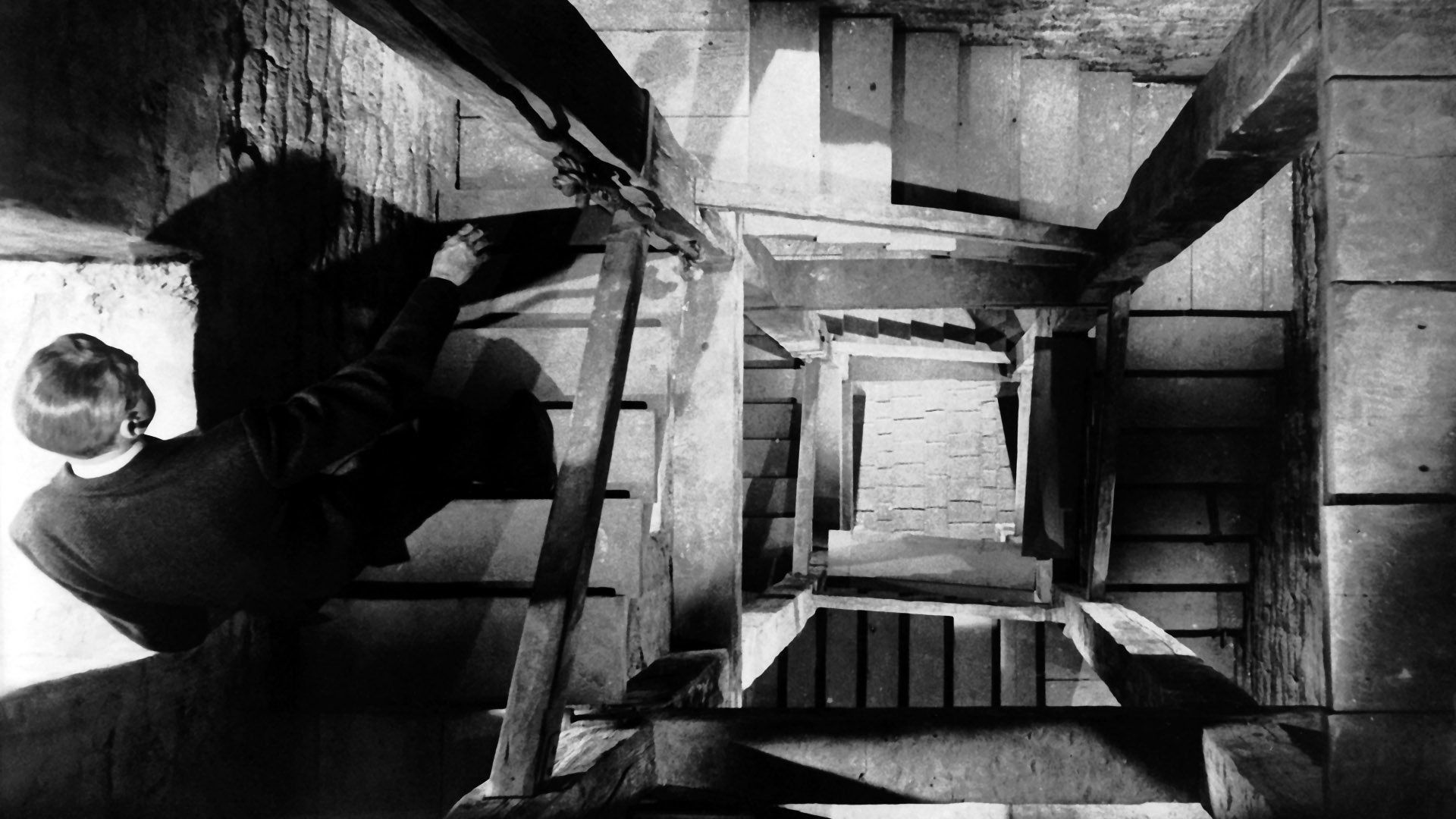 The most common form of challenge to the male gaze is arguably the highlighting or satirizing of its operation. In “Film and the Masquerade,” critic Mary Ann Doane, for instance, posits that the problem is one of proximity. Women need distance from their images, ways to see the gaze at work and resist its pull. She finds an example in the figure of the woman wearing glasses. Glasses on an individual signify an active gaze, a looking back. So, for example, in the case of Hitchcock’s Vertigo (1958)—a film centered in the operation and implications of the gaze—Jimmy Stewart’s Scottie desires the rich, beautiful, and troubled Madeleine (Kim Novak), whom he watches intently and wants to rescue. He obsesses over her and neglects his former fiancée, career girl Midge (Barbara Bel Geddes), who designs women’s lingerie (exposing the realities of the artificial construction of the beautiful woman’s body), asks insightful questions (that reveal Scottie’s insecurities), and wears glasses. Eyewear is not the only form of achieving an observably active gaze, of course. Women photographers in films may offer a similar challenge, as seen in The Stepford Wives (1975), where our photographer protagonist Joanna is the first woman to see through the macabre plan of the men of Stepford to murder their wives and replace them with robots. 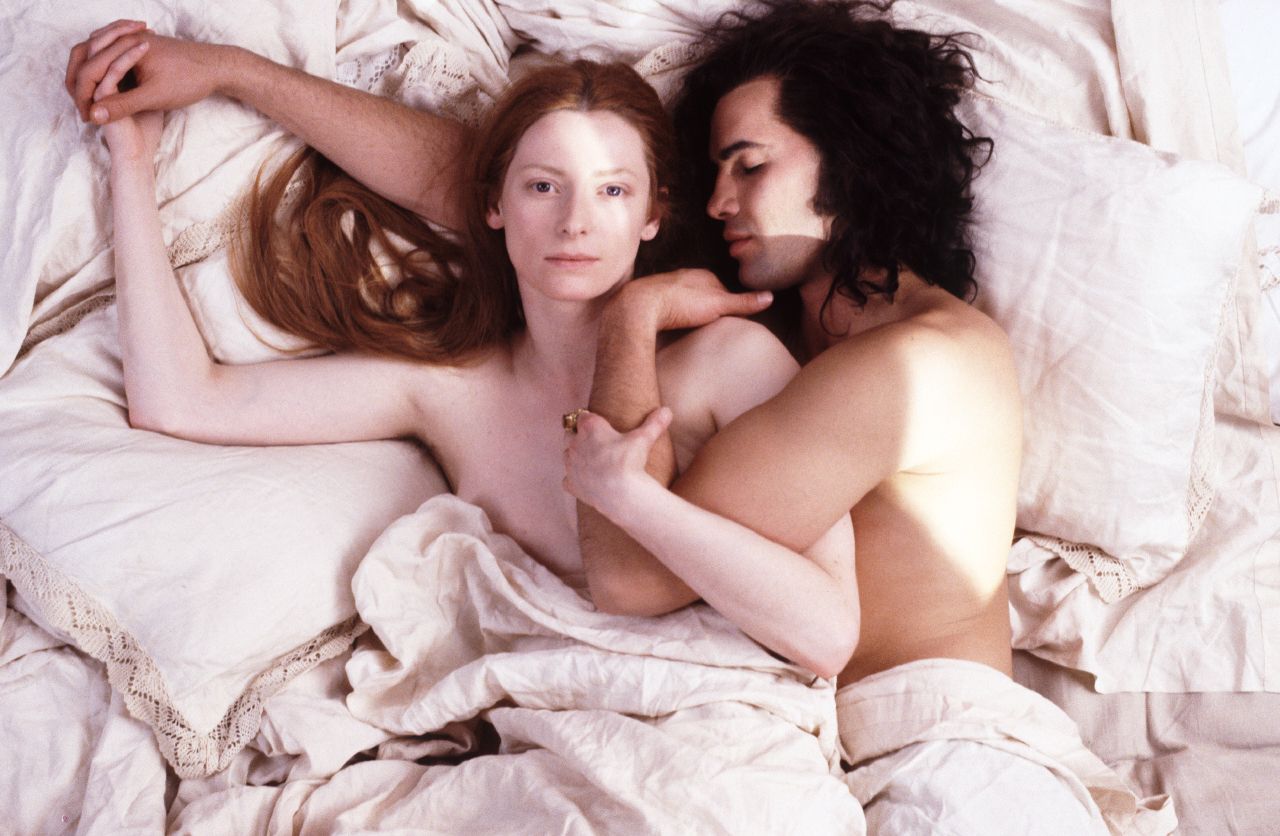 One of the more unique methods of addressing the male gaze and gender norms is the presentation of the male love interest, Shelmerdine (Billy Zane), in Sally Potter’s Orlando (1992). The stereotypical romance novel hero in appearance and solicitousness, Shelmerdine offers Tilda Swinton’s seemingly immortal Orlando (once a man but generations later a woman) an ideal heteronormative union. In both the film’s poster and several scenes in the film, Zane is clearly posed for beauty, the camera lingering over his passive form. This seems to reverse the gaze for viewers. However, Orlando ultimately sends Shelmerdine off to pursue his own adventures, using narrative subversion to comment on physical objectification and ultimately present a more egalitarian relationship. We see that Orlando rejects both the fetishistic reduction of her lover as well her own subjection to his gaze/lead. Yet, we should note that it takes an eternal and gender-shifting individual to achieve this perspective. More precisely, for director Potter, it seems to take an awareness of historical gender norms and an implementation of that awareness through manipulation of the male gaze.

Such analysis ultimately reveals that the female gaze is rarely an oppositional corrective to the male gaze, even when feminist directors are at the helm. The female gaze is probably best described as an important position of resistance—for filmmaker and audience members alike.

Read about the difference between male gaze and female objectification here.