In “Vertigo,” what is the significance of the ending?

In 2012, Hitchcock’s Vertigo (1958) unseated Citizen Kane as the “greatest film of all time” in the British Film Institute’s well-respected poll. Its complex and ambiguous climactic ending is certainly part of its power.

In the final scene, Scottie (James Stewart) has discovered that Judy (Kim Novak) is actually Madeleine, or rather performed the role of Gavin Ulster’s “mad” wife Madeleine for Scottie as part of a murder plot. To cure himself of his vertigo, Scottie forces the duplicitous Judy to reenact the scene that so traumatized him: the pitching of the dead body of the real Madeleine Ulster from the bell tower of the Mission San Juan Bautista by her husband, with Judy as his able and willing accomplice/lover. With Judy resisting all the way up the stairs, declaring her love for Scottie, it seems possible that even at this late stage, forgiveness may be possible. Then, suddenly, a nun appears behind Judy, scaring her into stepping backwards and then falling to her death. The film ends with Scottie standing, frozen, inches from the precipice, looking down, once again, at the dead body of the woman he loved.

Has Judy paid for her crimes? Is the nun a symbol of chastity, pointing to Judy’s status as a fallen woman (literally and symbolically)? Is this poetic justice for both Judy and Scottie? Is Scottie about to jump? Is the entire film a fantasy, his life flashing before his eyes, while he is actually hanging off the gutter—as seen in the film’s opening? To my mind, none of these questions will yield an answer that fully explains the power in Vertigo’s conclusion. We gain far more by exploring the function of the gaze throughout the film.

Laura Mulvey’s feminist psychoanalytic theorization of the (heteronormative) male gaze posits that the pleasure in looking—staring, admiring, objectifying, gawking—is hampered for men by the threat of rejection. Rejection deflects the gaze back on the gazer, and produces anxiety and even emasculation. (For Freud, on whose theories Mulvey relies, this is tied to castration anxiety, about which you can read more here.) To resolve such unease, the woman can be reduced to a sexualized object. In film, a director can encourage the viewer to gaze upon her bare legs, cleavage, lips, or other single element, fragmenting her and thereby quelling anxiety for the male viewer. Similarly, a male character within a film can ogle a desirable female, ignoring assets beyond her superficial physical appearance. Once she becomes a passive fetish object, her threat is gone. 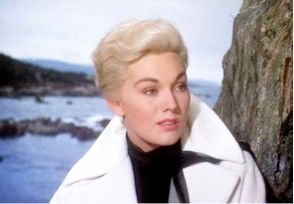 Sometimes, however, a female character resists such objectification. She may have mental or physical power, using her wiles (a.k.a. her intelligence) to control the man or wielding a gun (a threatening phallic object, to be sure). We see this in film noir’s femme fatale, a type to which Judy/Madeleine has a kinship, until she falls for Scottie because she likes the way he sees her, physically and emotionally. The only way to reduce the man’s anxiety with such a woman is to punish her through the film’s plot: what Mulvey describes as narrative sadism. The woman can be killed, jailed, run out of town, or, if she is particularly sympathetic, married off to our anxious gazer.

The key element often lost in discussions of the male gaze is that, while anxiety is reduced, it is never completely eliminated. Scopophilia, or the love of looking, is not a “curable” condition. Men will gaze, and the women they gaze at will cause anxiety, always. This awareness is vital to Hitchcock’s work in the script and images of Vertigo, and also to its conclusion. Scottie watches Madeleine because Gavin Ulster asks him to, but his gaze quickly becomes obsessive and unrelenting. We may forget that after he rescues Madeleine from her apparent drowning suicide, she winds up naked in his bed. Clearly, he undressed the unconscious woman, and, once she awakes and he gives her his robe, he stares unabashedly at her as she sits by the fire. 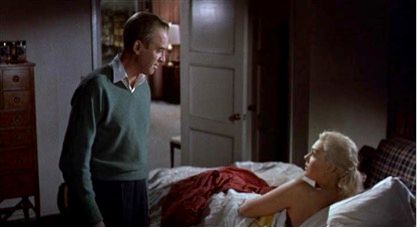 This woman, we realize later in the film, was not unconscious at all, having planned the jump into the water. Scottie has freedom (even more than do we, as viewers) to see every bit of this woman’s body, potentially alleviating through objectification the anxiety she produces by her marital status and odd behavior. Yet, in truth, Madeleine/Judy is in control…at least in the first half of the film. (Gavin Ulster is, of course, the ultimate puppet master, using Judy and killing his wife Madeleine to relieve his own anxiety, in psychological terms.)
In this context, the significance of the film’s climax is its reinforcement of the failure of any final resolution to masculine anxiety related to the gaze. Scottie has objectified and obsessively transformed Judy into Madeleine, only to discover that she was “his” Madeleine (not Gavin Ulster’s) from the start. His gaze is faulty; it has faltered because it has never been an equal gaze shared with a partner but a reductive, controlling gaze that could never fully succeed. Hence, at the top of the bell tower, Scottie recognizes that his discovery of the truth may be incomplete again, for Judy was Gavin Ulster’s pawn and can perhaps be recuperated by his love. However, the anxiety produced the gaze is not so easily dismissed, in either Freud’s theory or Hitchcock’s films. Scottie ends the film facing the impotence of his gaze. He looks down upon his idealized female, dead “again,” reinforcing the inevitability of scopophilia and the anxiety it always produces.