In “Star Wars: The Force Awakens,” is Rey a Mary Sue?

Quick Answer: It’s possible that Rey, The Force Awakens’ beautiful prodigy, is a Mary Sue— a character who is unrealistically competent and seemingly perfect. However, many of her skills are easy to explain and justifiable. The Mary Sue trope isn’t limited to women; plenty of male characters are often hyper-idealized, talented and attractive. But it’s undeniable that female Mary Sues are subject to much more criticism—criticism, it should be mentioned, that often smacks of sexist undertones. With the disparagement surrounding the characters of Rey in The Force Awakens and Furiosa in Mad Max: Fury Road, it’s possible that any film that doesn’t feature women as either shrews, victims, or bland love interests will be attacked by nerd culture “fanboys” online.

Star Wars: The Force Awakens (2015) has earned acclaim from critics and fans alike for both revitalizing the franchise and for being a significant improvement over the much-maligned prequels. But controversy erupted soon after the film’s release when contentious writer Max Landis criticized Rey (Daisy Ridley), the film’s protagonist, for being a Mary Sue. Other detractors of The Force Awakens have called the film “feminist propaganda” or “SJW garbage.” Mad Max: Fury Road (2015) and Ghostbusters (2016) both received similar backlash for featuring strong female characters in prominent roles. The controversy surrounding all three of these films has opened up public discourse over the not-so-subtle misogyny that’s present in “nerd culture.”

The definition of a Mary Sue is “an unrealistically competent and seemingly perfect character.” A Mary Sue, while not necessarily female, is often idealized and exhibits unrealistic abilities. Of course, it’s possible to think that Rey may fit the definition. Rey already has extremely good mechanical skills when we first meet her and is somehow able to pilot the Millennium Falcon without any prior experience flying spacecrafts. Furthermore, Rey is able to use the force effectively and efficiently without much training, while it took Luke Skywalker (Mark Hamill) presumably years to master the force. Rey is even able to defeat Kylo Ren (Adam Driver) in combat, who had been training under Luke before leaving to join the Dark Side. 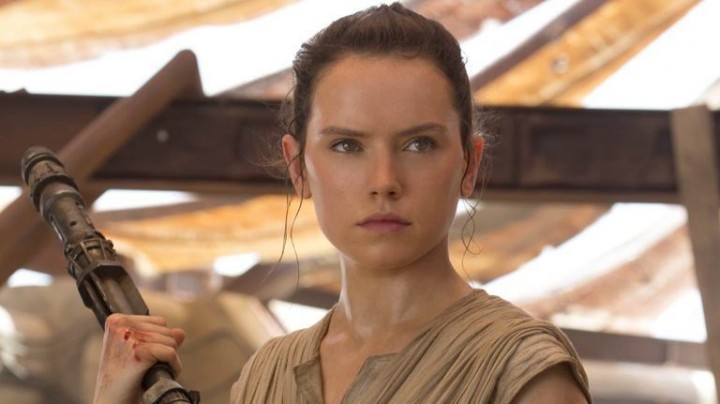 Daisy Ridley as Rey in Star Wars: The Force Awakens

Yet despite the criticisms of Rey’s character, Rey’s high level of competency can be easily justified. Rey was a scavenger for years prior to the events of The Force Awakens, which explains her extraordinary survival skills as well as her craftiness. Rey had also spent years scavenging on ships, which explains her familiarity with spacecrafts and her mechanical skills. It’s true that Kylo Ren was badly wounded before his fight with Rey, and its possible that he underestimated Rey’s fighting prowess as well. Rey’s gifted ability to use the force extremely quickly is more challenging to explain, but we still have yet to find out the true lineage of Rey’s father.

As mentioned, the Mary Sue trope isn’t limited to women; plenty of male characters are often hyper-idealized, talented and attractive. But it’s undeniable that female Mary Sues are subject to much more criticism—criticism, it should be mentioned, that often smacks of sexist undertones. Characters such as Jack (Leonardo Dicaprio) in Titanic (1997) or Owen (Chris Pratt) in Jurassic World (2015) are blatant examples of the Mary Sue trope, yet neither film was criticized because of it. With the criticism surrounding the characters of Rey in The Force Awakens and Furiosa (Charlize Theron) in Mad Max: Fury Road, it’s possible that any film that doesn’t feature women as either shrews, victims, or bland love interests will be attacked by the “fanboys” online. Though our country has made leaps and bounds in terms of gender equality, “nerd culture” still has major problems in regards to misogyny and sexism. The way that many geeks not only harassed but threatened women like game developer Zoe Quinn, feminist media critic Anita Sarkeesian, and most recently Ghostbusters star Leslie Jones is a disturbing trend that needs to end. Nerd culture should be about inclusivity instead of exclusivity, and these three women received an enormous amount of death threats and scorn for speaking up for what they believe in. Subscribers of nerd culture should welcome strong female characters with open arms, if not just for the sake of inclusivity and equality, then at least for the benefit of the box office.