How does “Star Wars: The Force Awakens” compare to the original trilogy?

J.J. Abrams’ crowd-pleasing Star Wars: The Force Awakens (2015) strikes the chords audiences have missed these long four decades, leaving behind the awkward memory of the prequels and evidently learning some lessons from the upset they caused in the passionate universe of Star Wars fandom. As Salon writes, Star Wars: Episode 1 - The Phantom Menace (1999), Star Wars: Episode 2 - Attack of the Clones (2002), and Star Wars: Episode 3 - Revenge of the Sith (2003) “have become synonymous with disappointment and heartache, a feeling of witnessing something you worshipped as a child get mired in midichlorian nonsense and embarrassingly racist pantomime.” What Culture wrote, “If I were a Jedi, The Phantom Menace would have most certainly led me to the Dark Side,” and Simon Pegg went on a famous rant against young Phantom Menace fans. Slate recently explained what’s to hate about the prequels: “they’re just really bad movies in their own right. …A big part of the appeal of the original trilogy was the simple battle between good and evil… But the prequels were about trade disputes. Name a single good film ever made about a trade dispute. There was a lot of standing around talking about stuff and having votes in senates and generally not doing interesting things with lightsabers. It was dull—even worse, it was badly written dull.”

Apart from their overall shortcomings as films, the prequels failed most audiences because they did not model theselves on the original triology. They did everything different. George Lucas and his collaborators left behind the 70’s visuals for up-to-date CGI. He abandoned the poignant, spiritual simplicity of the old story for pseudo-scientific explanations of the genetics of the Force. He forget the timeless advice: don’t mess with a good thing.

To the delight of fans, J.J. Abrams has revived their much beloved good thing. In The Force Awakens, he gives us the highlights of Star Wars: Episode IV - A New Hope (1977), plus a few plot points from Star Wars: Episode V - Empire Strikes Back (1980), rearranged and remixed. Our hero, Rey (Daisy Ridley), looks like a young Leia but shares Luke’s modest childhood in a desert landscape (on a planet named Jakku), where she’s been mysteriously abandoned by her loved ones. She follows Luke’s A New Hope journey of starting to intuit her powers with the Light Side of the Force. She even shares his sense of fashion. 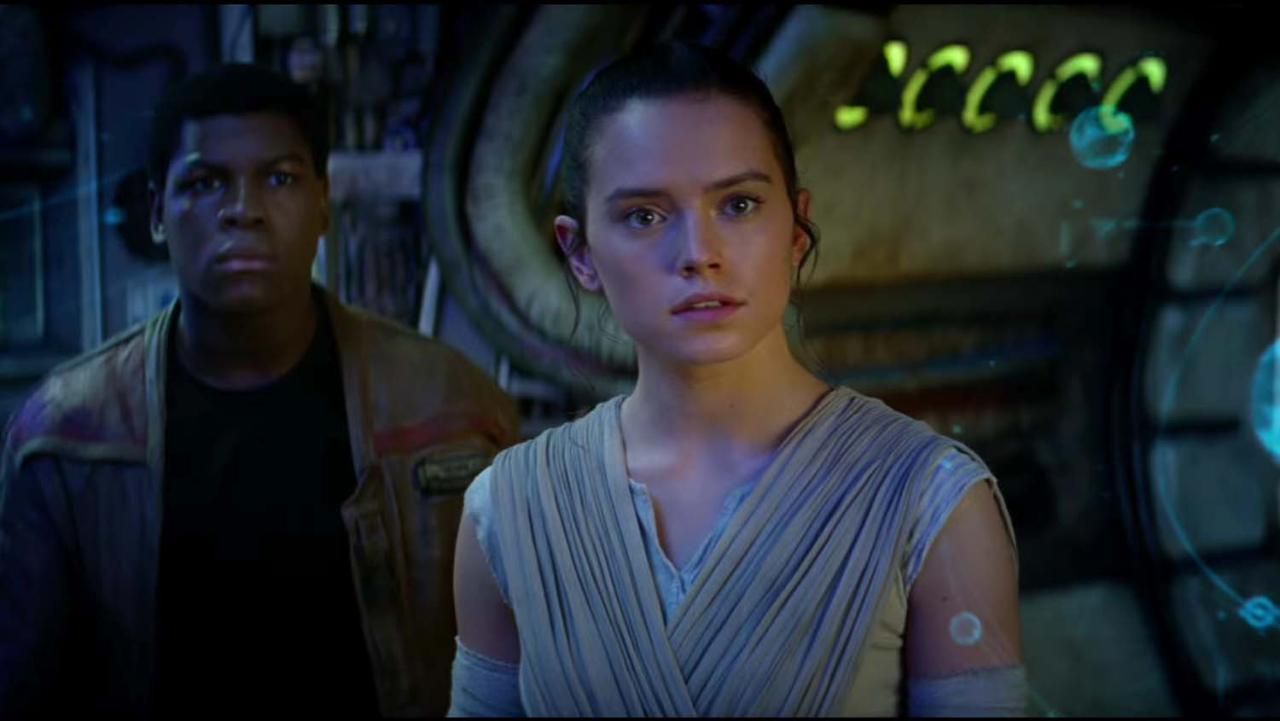 Her Hans Solo-esque close friend (and perhaps love) is Finn (John Boyega), an escaped Storm Trooper originally given the name FN-21871 when he was captured as a baby (as all Storm Troopers apparently are). We also have another Hans-like character in the cocky, free-spirited pilot for the resistance, Poe Dameron (Oscar Isaac).

The father-son showdown is intact, but instead of a father who’s gone to the Dark Side, we have a fallen son (Leia’s and Han’s offspring, Kylo Ren, whom The New York Times calls “baby Darth Vader,” played by Adam Driver). Instead of the fight at the end of A New Hope when Darth Vadar (David Prowse/James Earl Jones) kills Obi Wan Kenobi (Alec Guinness), we watch Kylo Ren kill Han Solo (the returning Harrison Ford, who feels comfortingly unchanged in the film, easily calling back his swaggering smuggler of the originals). The confrontation occurs on a long walkway set high above an abyss, harkening back to the duel at great heights between father and son, Luke (Mark Hamill) and Vadar, in Empire Strikes Back. Instead of the Empire, we have the First Order. Instead of the Emperor, we have a new, towering evil ruler named Supreme Leader Snoke (Andy Serkis). We have the Starkiller Base, which is the Death Star but bigger (“It’s big,” Han Solo shrugs, dismissively). And just as Han and Luke defeat the seemingly invulnerable Death Star in A New Hope with a couple of dinky ships and a lot of courage, the plan to take down the Starkiller Base is similarly scrappy, unlikely, and fun.

Refreshingly, as the Resistance plans the attack on Starkiller Base, The Force Awakens eschews the semi-scientific-sounding nonsense we’ve come to expect in Christopher Nolan’s era of blockbusters and boils it down to a simple plan: we get in there (somehow), we turn off the shields (somehow), we disable the weapon (we’ll figure it out). Audiences don’t need patronizing, technical-sounding filler dialogue when there’s no scientific substance. Star Wars was never Science Fiction, but a spiritual allegory. The dialogue, overall, feels like the dialogue of a 70s film – from regurgitating old favorites like “May the force be with you” to hitting that near-cheesy/action-appropriate tone in phrases like “We’ve got company” and “Mumbo jumbo.”

Prague Post writes, “Episode VII’s determination to stay close to the original trilogy pays off handsomely. The desert planet of Jakku calls to mind Luke’s home planet of Tatooine; the inside of a bar on Takodana, a planet so verdant it leads Rey to exclaim she never knew there existed so much green in the entire galaxy, looks a lot like the notorious Mos Eisley cantina from Episode IV; and the First Order’s callous, indiscriminate annihilation of entire planets obviously references the Death Star’s destruction of Princess Leia’s Alderaan.”

Also as in the original, we can follow Joseph Campbell’s Hero’s Journey through the usual archetypal characters and plot points: the Hero’s (Rey’s) Call to Action, her Refusal of the Call, the Meeting of the Mentor (Han), the Crossing of the Threshold, and so on. We have the old stark contrast between good and evil—the profoundly comforting duality at the foundation of the original films. Star Wars makes us feel it is easy to tell the difference between Light and Dark. While the Dark Side may be seductive for the most powerful among us, we all know which is which. The choice is, if not easy, clear. 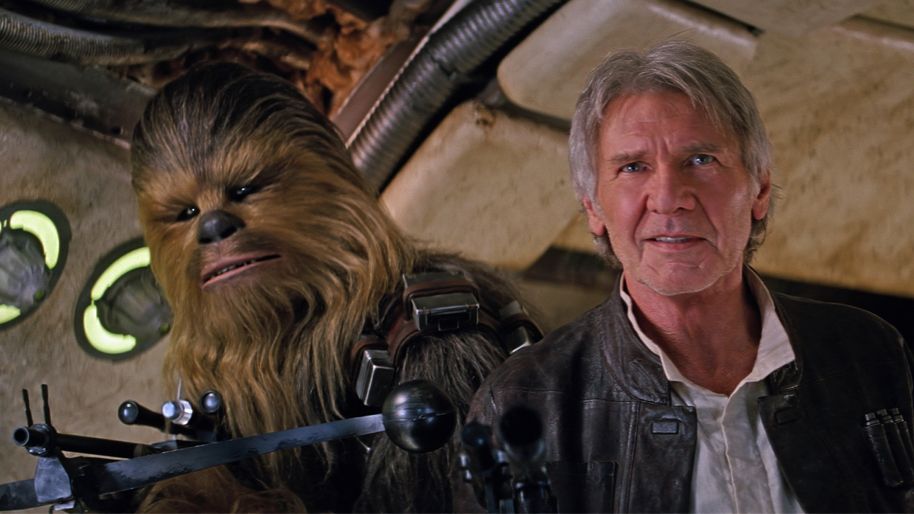 Of course, the most important reunion The Force Awakens facilitates is the one between the audience and the beloved original cast: Han and Chewbacca, Leia (Carrie Fisher, now a general), C3PO (Anthony Daniels), R2D2, and Luke. Abrams strategically withholds each re-introduction to maximize the impact and saves Luke’s for the last moment, when we finally see him on a craggy island, filmed on Skellig Michael in Ireland. Where The Force Awakens filmmakers have brought in new characters, they have cast well, reincarnating the spirit of the original trio, with some twists, in the new stars. One of the originals’ great strengths was casting. As Slate writes, “The original trilogy had one of the most iconic villains in movie history and put him against some truly charismatic heros. AFI listed the greatest heroes and villains of all time in 2003. Darth Vader comes in at No. 3 on the bad guys list, and Han Solo at No. 14 on the list of good guys supported by Obi Wan Kenobi (the Alec Guiness, original trilogy version) at No. 37.” Finally, The Force Awakens can boast likeable performances for Star Wars again.We also get a loveable new droid, BB-8, this generation’s continuation of R2D2’s charm through expressive beeps and adorable movement. 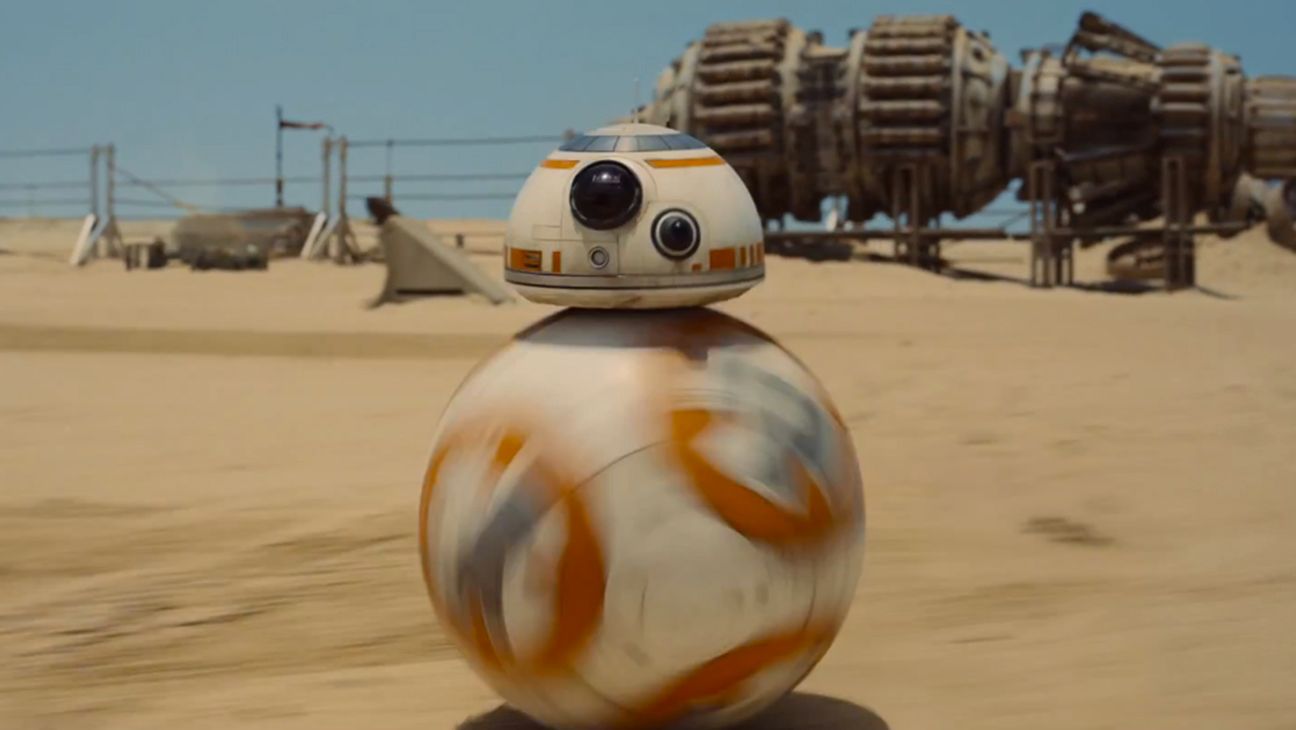 Visually, too, the films recall the originals. The notable update is the 3D, but this doesn’t alter the basic visual feel or detract from the emotional warmth of the aesthetics. The look of outer space, the 70s-inspired costumes, the earthy and filmic color palette, and the many wide shots of natural landscapes (desert, green, or snowy) make us feel we’re back in the Star Wars universe. We even have the old-style wipe transitions between scenes. According to Digital Spy, “Director of photography Daniel Mindel used Kodak film stock 5219 to recapture that classic ‘70s Star Wars aesthetic.” Abrams also reportedly relied on practical effects as well as visual effects, actually making as much as possible rather than relying solely on computers. Screenrant praised Abrams for “steering the Star Wars franchise away from the hollow, CGI-filled aesthetic of the prequel trilogy, and back toward real locales, props, costumes and some great production design (inspired by original Star Wars artist Ralph McQuarrie) that helps to both reestablish the familiarity of the Star Wars universe.”

While Abrams pays due respect to the prequels, he said in an interview with Slash Film, “The original trilogy was for me what Star Wars felt like… What I loved about the original trilogy is how real it felt. I still to this moment can’t believe how it felt to look at the desert of what was supposed to be Tatooine and seeing these two droids walking along and no fantasy genre film had ever, in my experience, looked like that before. And suddenly this was real. … It was so miraculously visually authentic and it was one of the reasons why Kathleen Kennedy and I decided very early on, that’s what this movie needs to feel like. Which is why when it would have been easier and cheaper and faster to not go to Abu Dhabi, it wouldn’t have looked as good if we hadn’t. It would have been easier not to travel to Wales or to Ireland, Iceland or to build all these sets, exterior and interior, that we did… it was a piece of the puzzle that George got so unbelievably right in those first three films and it was really important to us that we adhere to that.”

The New York Times writes that The Force Awakens recovers “some of the niceties that went missing as the series grew into a phenomenon, most crucially a scale and a sensibility that are rooted in the human.” Perhaps, to many, this is what felt most lacking in the prequels: the human element. The Force Awakens’ natural ease, moments of humor, retro sensibility, and technical restraint make this film a return to Star Wars’ humanity.