In “Taxi Driver,” what is the role of the “director” motivating Travis’ actions?

Through the rain-soaked windshield of Travis Bickle’s (Robert DeNiro) car, the first moments of Taxi Driver (1976) establish a lot by doing very little. The muddled, dark, distorted images of New York City at night, steam rising through the streets to get caught in the headlights, reveal the seedier side of the urban landscape. Close-up shots linger on Bickle’s eyes as shadows and neon dance across his face, telling us we’re about to be absorbed into his vision of the world. Musical cues bounce between smooth jazz notes and suspenseful percussion, as Bickle drives through masses of all-hours city dwellers and past late-night businesses. What’s directing his actions? “I just want to work long hours,” he tells a dispatcher at the taxi company.

A sign reads, “Stop! Blow your horn. Proceed with caution.” It’s a potent moment of foreshadowing, hinting at the direction Bickle’s character is taking us. Minutes later, the film’s noir-ish narration begins and directs us into the mind of Travis Bickle. He’s a man unravelling quietly, unsure of where he’s going, but unaware of his own desperation. His dialogue reveals an early glimpse of his disturbed state. He tells us, “all the animals come out at night - whores, skunk pussies, buggers, queens, fairies, dopers, junkies, sick, venal. Someday a real rain will come and wash all this scum off the streets. I go all over. I take people to the Bronx, Brooklyn, I take ‘em to Harlem. I don’t care. Don’t make no difference to me. It does to some. Some won’t even take spooks. Don’t make no difference to me.” 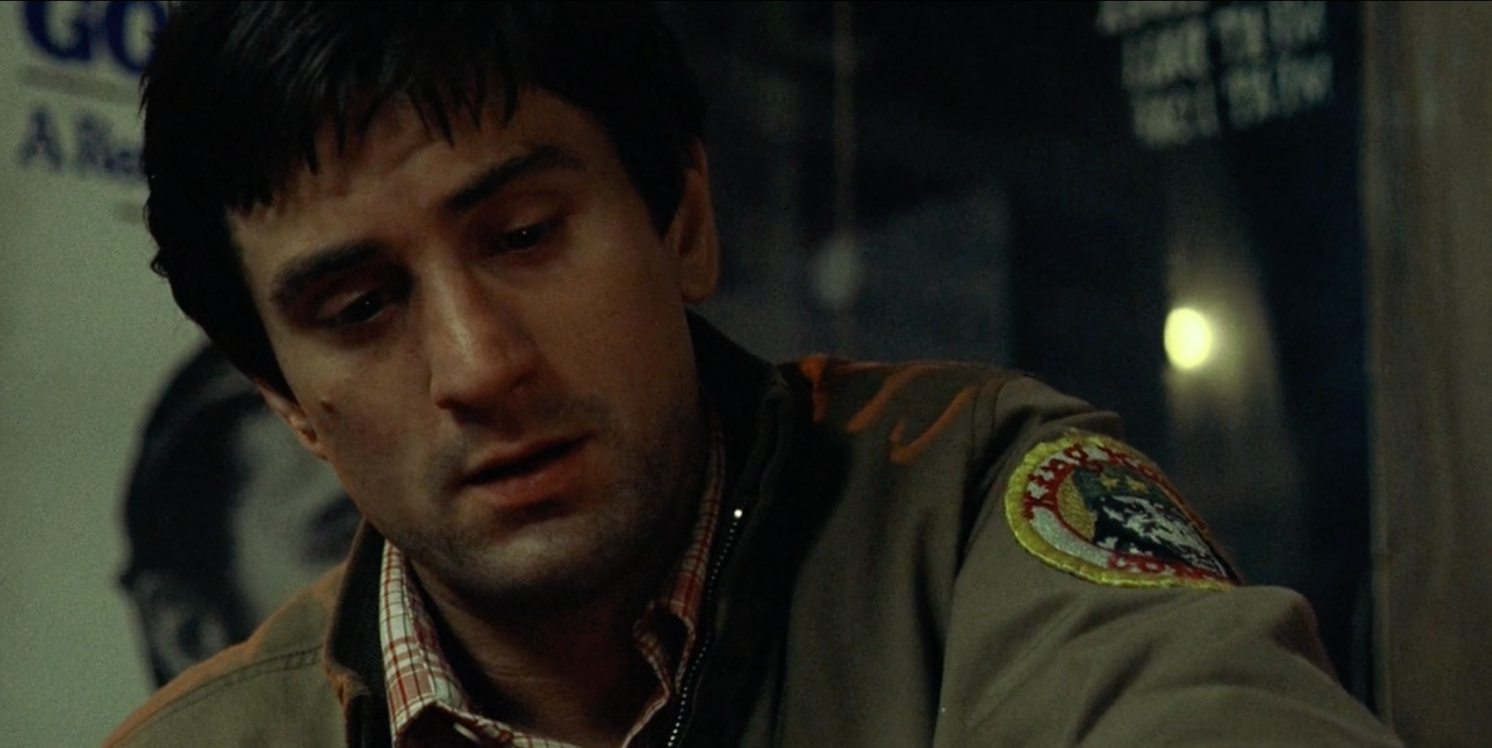 Bickle has no purpose in life. His comments about his claimed indifference to the type of people he chauffeurs reflect this passivity, while the offensive language he uses to describe his passengers reveals contempt and bigotry below the surface. His driving brings him into contact with areas, people, and situations he claims he’d rather not know about: the “scum” that needs to be washed away in the rain. He transports men and hookers, his car is egged by street kids, and he has to “clean the cum off the back seat” every night when he returns to the garage. Yet his attitude sets him up for this life. Instead of being active in driving his own destiny or choosing where he goes, he lets himself be directed all over the city, giving rides to people he secretly detests. As a result, under the surface, he is eaten away at by a madness that will eventually push him to dangerous action. Travis and his lack of agency or drive is an illustration of the destructive outcome that arises when a virile masculine energy is unfulfilled, unmotivated and unhinged.

Bickle is a man driven by extremes and not in control of his baser urges. His perversely nihilistic view of New York City feeds a simmering hatred for society in him. He is sexually repressed, visiting porn cinemas with growing frequency and otherwise isolating himself from everyone except fellow cabbies. Even when he’s with them, he’s not truly present—he stares off in space, scowling at black people in a blatantly racist manner that discounts his voiceover’s statement that the race of his passengers “makes no difference” to him. He lies to himself, shows little self-awareness and lives mostly in his own head, feeding his neuroses until they start to control him. This state of existence renders him unable to judge what’s socially acceptable in the most regular interactions. When he sees Betsy (Cybill Shepherd), he’s driven by sex. After figuring out a phony means of asking her out, he flubs the date by making the incredible decision to take her to a Swedish porn film—but not before driving her “boss,” Senator Palantine (Leonard Harris), while subjecting him to a speech about the miserable state of the city and its inhabitants. Seconds later, Travis’ theories are seemingly validated, when Palantine disembarks and a pimp named Sport (Harvey Keitel) and the teenage prostitute, Iris (Jodie Foster), get in the car. The moment shows us that Travis’ ideas of his world are constantly confirmed by his tendency to drift towards the margins of society, looking for examples of the very immorality and seediness that he bemoans. At this point, we can say that, overall, Travis is directed by his subconscious urges, which largely consist of sexual drive and resentment or hatred toward others. 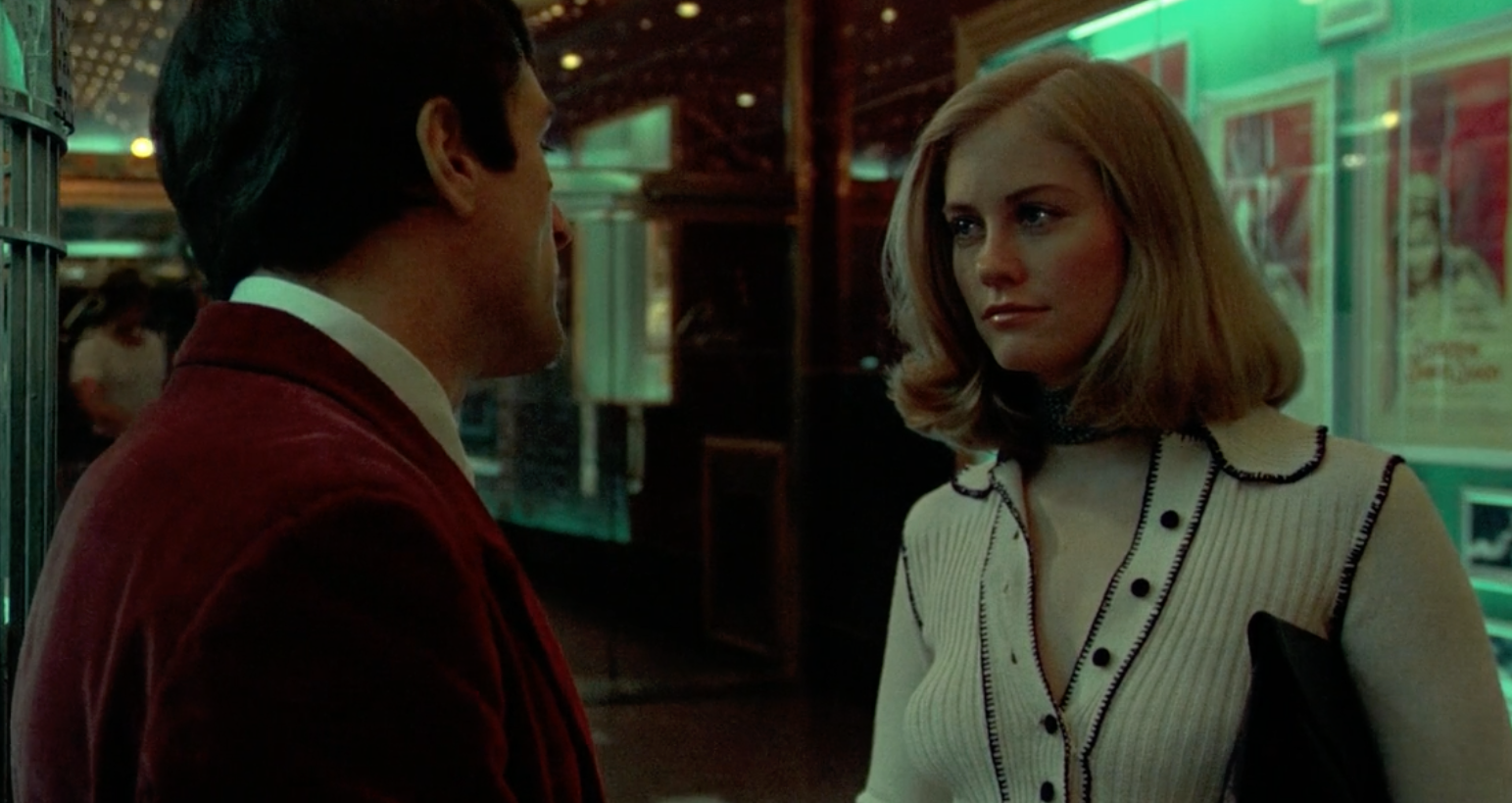 Travis’ directionlessness hits a turning point soon after, during the film’s most meta moment. Halfway through the picture, a passenger played by director Martin Scorsese directs Travis to park outside an apartment building and watch a woman in the window. It’s the passenger’s wife, but it’s not his apartment. He tells Travis about his plans to kill her with a .44 magnum. The conversation gets wildly graphic, and Travis sits, transfixed. “You must think I’m pretty sick,” the passenger repeats. Travis says nothing—the moment sparks an epiphany in him. This man plants the seed of extreme violence in Travis’ head, and everything that follows is changed. In this moment, his pointless, directionless life of taxi driving acquires new purpose. “Now, I see this clearly. My whole life is pointed in one direction,” Travis will later say. “There never has been a choice for me.”​ Society has failed him. Betsy has failed him. The system has failed him. None have given him purpose to end his empty drifting. But, in this moment, the film’s director literally steps into the picture to give the main character direction. “I just want to go out and really do something,” Travis tells fellow driver The Wiz (Peter Boyle) in the next scene. That something turns out to be buying his own .44 magnum (among other guns) and planning the assassination of Senator Palantine, whom he sees on the television talking about how the “people will rise to an unprecedented swelling.”

Moving forward, Travis becomes obsessed with his body and form, exercising in all the spare time he doesn’t spend practicing handling his weapons. His first moment of authority comes in the form of stopping a convenience store robbery, after which he adopts a self-appointed identity of savior of the people. His inclination toward violence grows as he takes another life, and it only makes him feel more noble and superior. He holds his magnum while watching American Bandstand. He visits with Iris and tries to talk her out of a life of prostitution. Ultimately, the passenger in the car, the film’s director, has impressed upon him the virtue of violence.

When the day comes to attempt to assassinate Palantine, he fails. Instead, he takes to the streets and kills all the pimps and johns surrounding Iris in a gruesome bloodbath that ends with him taking a few bullets of his own. He destroys the people he introduced in his first piece of dialogue as his vision of the city’s scum, and, in this culminating act, he arrives at the destination toward which he was being pushed throughout the film. He has allowed his madness and obsession to be fueled by long-standing, unaddressed hatred, until he finally snaps.

Scorsese’s cameo in Taxi Driver was reportedly not intentional, but the result of the actor cast in the part becoming sick and unable to shoot. Scorsese stepped in to fill his shoes, apparently, due to necessity. If that’s the case, the improvised change was serendipitous, as it makes for a womnderful connection between the thematic and literal components of the film—not to mention that Scorsese’s performance is creepily memorable in itself.

Ultimately, Scorsese’s cameo as the director driving Travis toward violence fulfills the inevitable. Because Travis lacks any higher interests or self-control and is driven only by his base sexual drive and bitter hatred, it was always only a matter of time before a malevolent force would plant itself in his head and use this aimless being as an instrument of harm. When a person lacks agency and meaning in his life, violence readily appears to drive him with a false idea of purpose.