How is “Julia” a story of female empowerment and friendship?

Julia (1977), based on a section of Lillian Hellman’s memoir Pentimento, is a story about the relationship between two women, one of whom becomes a role model of female empowerment for the other.

In flashbacks, we see that the two main characters, Lillian (Jane Fonda) and Julia (Vanessa Redgrave), have been friends since adolescence. Although Julia comes from a wealthy family, she feels compassion from a young age for the problems of the poor and is incensed by her relatives’ apathy toward the sick in Cairo and the unhealthy living conditions of the poverty-stricken workers in her mother’s home in Scotland. This early concern for the physical wellbeing of the oppressed is why Julia, an intelligent woman who comes to understand the words of history’s great thinkers, studies to be a doctor. Her brilliance and courage make her an example for Lillian to follow throughout the women’s lives, from childhood onward. As a young girl, Julia crosses a rushing river by walking over a twisted tree trunk, while Lillian is afraid to cross. Julia tells her friend to go below and find a safe passage. Lillian instead tries the difficult way, stumbles, and is rescued by Julia, who tells Lillian that she will be able to make it on her own the next time. This prediction of growth and self-sufficiency comes true during the trying political times that accompany the women’s adulthood. 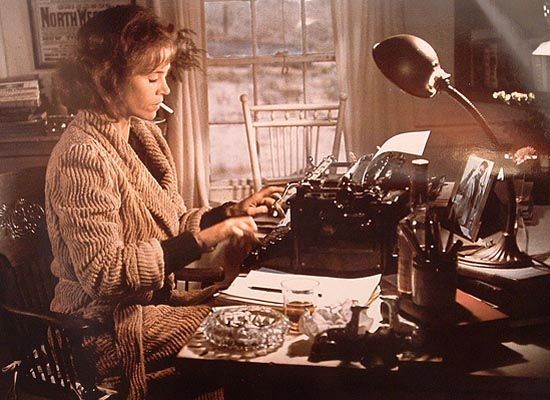 The “next time” occurs when both women are adults. The main thrust of Julia’s plot occurs during the rise of Nazism in Germany. While Lillian is visiting Paris on her way to a play festival in Moscow, one of Julia’s Nazi resistance associates confronts Lillian at her hotel. The man, Mr. Johann (Maximilian Schell), communicates that Julia wants Lillian to secretly transport money to Berlin on her way to Russia. The cash will be used to secure the release of Jews and political prisoners through bribes, a task that could be dangerous for the Jewish Lillian. Julia once told Lillian to “work hard, take chances, be very bold.” But, just as she told the younger Lillian that she didn’t have to take the dangerous way across the water, she ask Johann to tell Lillian that if she feels that she “cannot do it, don’t do it.” Throughout the film, Lillian doubts the depth of her own courage, a fact that is noted by her lover, writer Dashiell Hammett (played by Jason Robards in an Oscar-winning performance) in an earlier scene when he tells Lillian that she is the neighborhood bulldog, but thinks she is a cocker spaniel. Julia’s task allows Lillian’s daring to finally reveal itself, as she hesitantly agrees to transport the money. While running toward the train to transport the funds, Lillian stumbles, just as she did when she tried to cross the river, echoing that earlier crossing as she now finds the courage to complete this more meaningful journey into dangerous territory.

Lillian succeeds in her task, but only with the help of two resistance women who accompany her on the train as she transports the money in a hat. It is noteworthy that women, not men, take the big risks in the film, helping each other to help others. When Lillian delivers the money to Julia, their brief, heartbreaking rendezvous at a restaurant in Berlin underscores the love between these two exceptional women. Julia, who has lost a leg in an attack by the Nazi youth at the college in Vienna, tells her friend that she now has a baby, significantly named Lillian. She plans to travel to New York for a new leg and wants Lillian to care for her baby, who is currently in Alsace with a baker’s family. But this is not a happy tale, and their hopes never come to pass: Julia is murdered, after which Lillian tries desperately to find the baby, only for her attempts to end in failure. 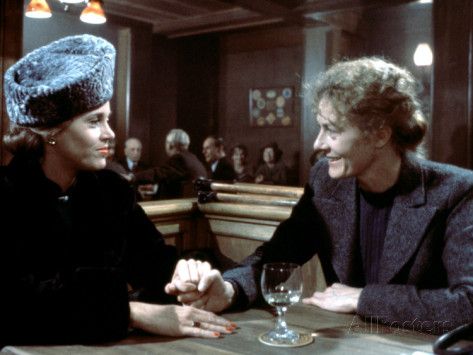 The film depicts Hellman as a determined author who worked hard to become a great American playwright in a country that has not recognized many women in this artistic field. She labors to make her first play, The Children’s Hour, a success and, although Hammett is there to help her with editorial advice, the men in the film are not as reliable as the women. Hammett tells Lillian to go to Paris without him to work on her play and later does not travel with her to Europe and Moscow, nor is he there for the opening night of her play on Broadway. The film also suggests that he has affairs with other women. Even more significantly, the father of Julia’s baby is not important to her and doesn’t want anything to do with the child.

This story shows how one woman, with the help of a self-empowered female friend, finds the ability within herself to be heroic. The relationship between Lillian and Julia is a platonic one, but there is more affection between these two than either feels for any man. At one point Lillian says that Julia has “the most beautiful face I have ever seen,” and hugs her, saying she loves her. The caring of these two women for each other shows how the bond between women, in the absence of men, can engender the strength and courage to unselfishly help people in need.