If Ira Levin’s 1972 novel and the 1975 film adaptation of The Stepford Wives is best remembered as a dark satire of the reactionary and misogynistic groupthink of privileged classes in American suburbia, then Frank Oz’s 2004 film adaptation seems above all a satire of that satire. Although time may have lent novel and original film more comic relief than original audiences experienced, the 2004 film exploits and expounds upon the excesses of dated imagery to emerge as a comedy with ill-fitting moments of suspense. The film is most interesting where it updates the original tale of dull rich men who seek docility, subservience, and ever-youthful wives, adding a critique of the millennial career-driven superwoman who, at the film’s conclusion, turns out to be even more malicious and insane than Stepford husbands ever were. With such radical adaptation in mind and given that most viewers in 2004 have neither read the original novel nor seen the 1975 film, Oz’s film emerges as, above all, a gloss on the adjective “Stepford,” a shorthand for a kind of privileged-class domesticity and vapidity, a type of woman who lives to serve with beautiful body and empty mind and has most often been seen in television advertisements for cleaning products, particularly in the U.S. of the post-World War II era. (For more on this topic, see “What does it mean to call a woman a “Stepford Wife?”)

Oz’s adaptation makes ample and heavy-handed use of this trope, from fashioning every Stepford wife as a platinum blonde who flatters not only her own husband but every other insecure husband in town to the scene at Stepford’s day spa for women in which aerobics class is done in high heels while impersonating washing machines. To reinforce the artificiality of such notions of femininity, the film’s opening credits feature actual clips from early television advertisements and “World of Tomorrow” newsreel images of technologized domestic bliss. And a late scene has the film’s apparent villain display his own retro infomercial, advertising the “Stepford process” in colorized and cartoon homage to clumsy educational films of the past. 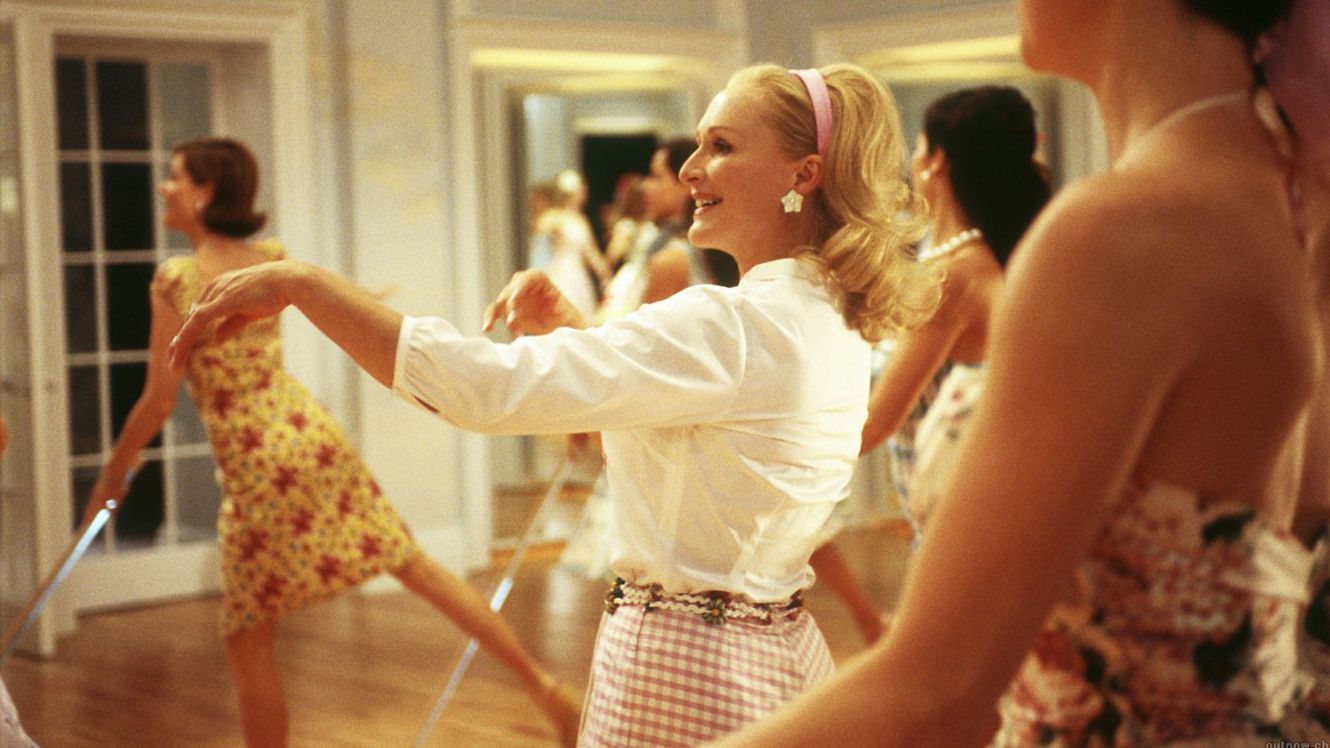 That the film actually details the process and technology through which the women of Stepford are robotized differentiates it significantly from the original novel as well as the 1975 film. Levin references urban sprawl and environmental pollution while keeping the specifics of what happens to the wives vague, in typical thriller fashion, while the 1975 film adaptation adds images of the actual robots, having the protagonist Joanna murdered by her own double. In contrast to both of these, Oz engages more directly if loosely with science fiction imagery, presenting the excessively automated house, for example, where the refrigerator clamours that it is out of milk and checks your weight and body mass daily.

The details of the technology of the Stepford wife robots are also addressed in the 2004 remake, most satirically in the demonstration of the golden remote control with which the men “operate” their wives, from summoning them to service to shutting them off when even their breathy flattery is more contact than a husband desires. When new resident Walter Kresby (his last name changed from Eberhart in the novel and 1975 film to indicate that he and his wife, Joanna Eberhart, do not share a last name in our post-millennial era) needs to be shown the secret of Stepford’s women, he is given a demonstration by Herb of how his lovely wife Sarah can act as a mobile ATM. A debit card is shoved into the statuesque blonde’s mouth, whirring and clicking occurs, and then money sprays out.

The actual science behind the creation of the wives is less clear, for alongside what must be robotic in the ability to process debit cards is a later explanation (via the aforementioned infomercial) that describes implanting chips in the wives’ brains and remodelling but not replacing their bodies. That the women are not robots but cyborgs is borne out when, at the film’s climax, the seemingly convinced Walter goes down into the “lab” in the basement of the Men’s Association and finds numerous floor-to- ceiling touch-screen panels that control the wives, which he swiftly un-programs with random button pushing. If such elements mean the remake is more science fiction than horror, however, we must ask why, when Joanna faces her doom, is she introduced to a naked, hairless body on a marble slab that rises from the floor like something out of James Whale’s Frankenstein (1931)? Are the Stepford wives humans with mind-controlling chips or robotic doubles? The film is uninterested in reconciling such questions, reflecting its emphasis on satire.

The positioning of the villain is another particularly significant change from 1975 to 2004 film. “Mike” (for Microsoft) Wellington, replaces Dale “Diz” (for Disney) Coba as the apparent architect of Stepford, but unlike his forebear, Mike is less misogynistic evil than campy fop, portrayed with typical excess by Christopher Walken. That Mike turns out himself to be a robot (a “Stepford husband,” the film pronounces) extends the film’s superficial social commentary into the twenty-first century. Unlike the Stepford wives themselves, Mike is entirely mechanical, invented by his former brain surgeon wife, Claire, to replace the husband she long ago murdered (along with the young blonde assistant with whom he was having an affair). Thus, Glenn Close’s Claire, who seemed the champion Betty Crocker bimbo of the town until the film’s penultimate scene, emerges as Stepford’s mastermind. Her goal was to “turn back time” to a world of “romance and beauty.” Rather than attacking patriarchal norms, she argues that modern career women were the problem, turning themselves into robots. This critique turns the tables on the message of both novel and original film, instead echoing 1980s and 90s anti-feminist rhetoric, as exemplified in such best-sellers as Christina Hoff Sommers’ Who Stole Feminism? (1994) and decried by Susan Faludi in Backlash: The Undeclared War Against Women (1991).

Just before Claire dies (electrocuted by her robot husband’s decapitated head), she makes plain that men were to be robotized next. There is in the Claire character, then, a satire of both liberal feminism and radical right anti-feminism. The liberal feminists are lampooned as career-obsessed monsters through the figure of the “man-hating” feminist, while the radical right perspective is parodied in Claire’s absurd vision to restore outdated gender roles. As with many aspects of the film, there is a self-consciousness to its twist on the novel, the original film, and the concept of the “Stepford wife,” as well as an effort to maximize box office success by raising and then lampooning each position it seems to take on feminism and gender relations.

Where the film seems to take its strongest social stance is in its critique of corporate media culture. With emphasis on outdated “battle of the sexes” rhetoric that was popular at the time of Levin’s novel, the film attacks the gender politics of reality television and the female executive with equal disdain. The film opens with network exec Joanna Eberhart at a ceremony introducing a new season of reality shows that reveal women developing awareness that they are “better” than men. Joanna is fired when one disgruntled male participant goes on a shooting rampage to “kill all the women” at the ceremony, and Joanna and her husband (who quits his lower level position at the network in solidarity) decide to move to Stepford after she is institutionalized for nervous collapse. In Stepford, they can slow down and learn to be happy again as a couple. (We are told Joanna hasn’t been willing to have sex with her husband in a year, for example, and she confesses that all the problems in the marriage are her fault.) Joanna throws off the black business suits and starts wearing pink and making cupcakes, but anyone who enters the film knowing the term “Stepford wife” realizes this won’t be enough to save her.

Critique of sexism in media imagery informs Levin’s novel, from the television- and women’s magazine-inspired template for the perfect housewife to its direct reference to Betty Friedan, whose The Feminine Mystique (1963) emphasized the sexism in media imagery that caused educated suburban housewives to suffer debilitating anxiety and depression. The book arguably jump-started second-wave liberal feminism. With its contemporary setting, the 2004 film instead aims its critique at today’s media environment, from Joanna’s male-bashing reality programs to her friend Bobbie Markowitz’s vicious books (such as her mother/daughter tribute I Love You But Please Die), but the message is hardly current. Mike’s infomercial speaks of helping the Stepford plan “go global,” but Claire’s plot is ultimately to create a world of happy robots that is not retro chic but reactionary fantasy.

A final feature worth noting is the remake’s updated commentary on suburban life. Bobbie Markowitz (shortened to “Markowe” in the novel to assimilate in protestant 70’s suburbia) still faces antisemitism in 2004, for example, when we see the women’s book club gush over a Christmas Keepsakes volume and applaud Bobbie’s idea of making a pinecone display of “BIG JEW” on her front lawn in the snow. Bobbie is also the film’s mouthpiece on racism, as she notes the lack of racial diversity in Stepford at the town picnic. Replacing the novel and 1975 film’s sole African American couple in the 2004 version, however, is gay couple Roger and Jerry. The film thus implies that to suburban whites in the 21st century, gay white couples are preferable to Black, Hispanic, or Asian American families. (Of course, the more flamboyant, effeminate, and liberal member of the couple, Roger, must undergo the Stepford process, becoming a suit-and-tie-wearing Republican senate candidate who chants, “I’m not a sissy!”) 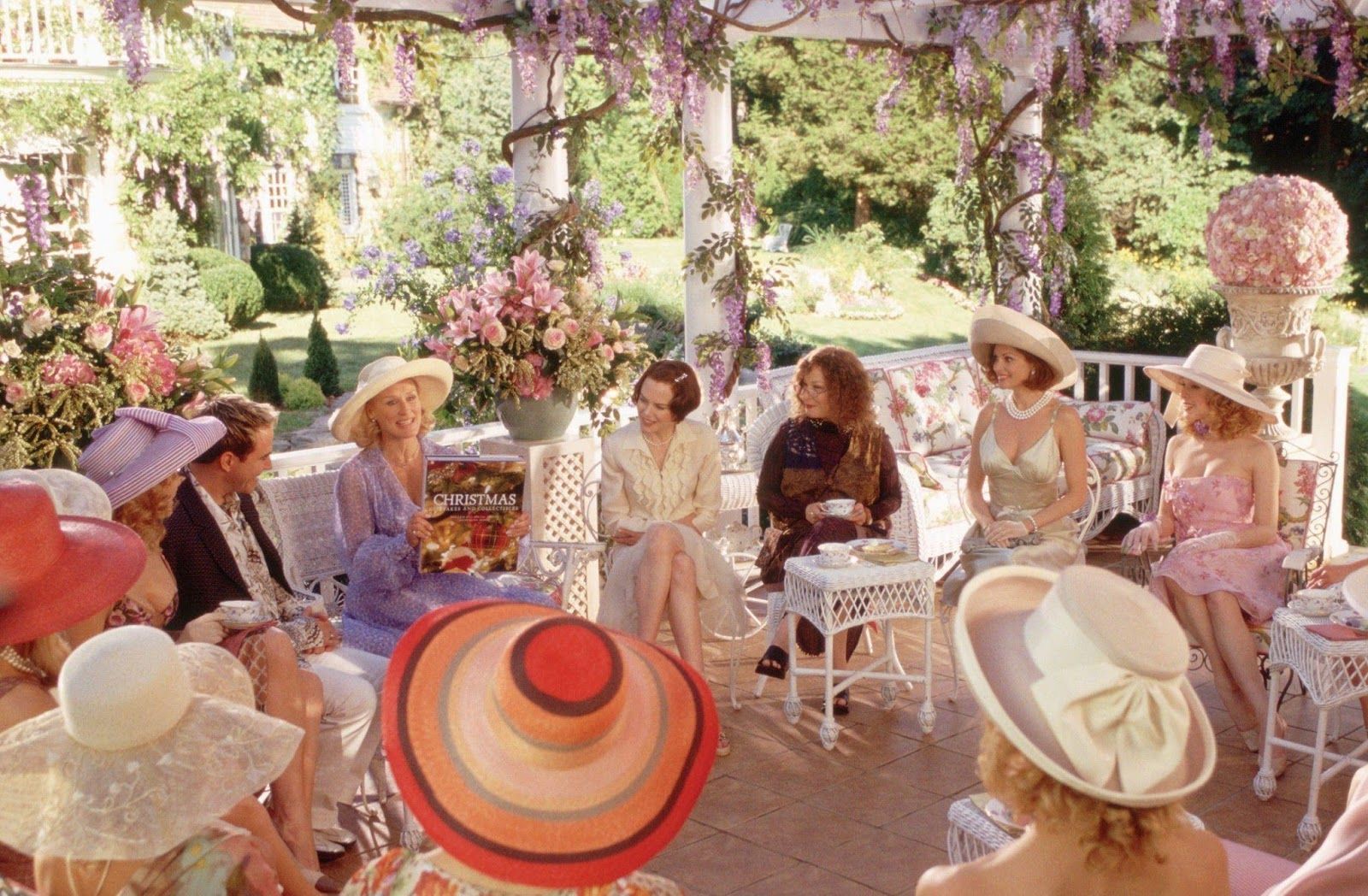 That Oz’s film was largely panned by both critics and audiences at its release, achieving superficial praise only as broad comedy, can most easily be explained by the fact that it is no longer possible to maintain suspense in a “Stepford” film. The term is too widely known, even if the book and original film are not. In addition, it is not a straightforward comedy, but a spoof of a novel and film that were already satirical. This pushes the film into camp, to my mind the most useful genre through which to consider its impact. If camp offers potential for social critique through humorous portrayal of excess, we see this clearly when the film’s gay characters are delighted by Stepford kitsch, and we are invited to experience femininity as a joke or a drag act. That the film does not exploit this opportunity consistently, slipping into ineffective horror and even melodrama before it concludes, reflects the difficulty of updating The Stepford Wives for a contemporary audience. The social critique of the novel and even the original film becomes mired in the 2004 remake’s self-consciousness, turning suspense into smug comedy, while the film’s humor is burdened by the fact that the audience knows the punchline before the opening credits roll. Apart from what we learn from reading the film as camp, ultimately, the film’s social message—and the question who is the ultimate subject of its “critique”—is so muddy that the film is arguably not sending any overriding, relevant message about gender at all.