How does “Grave of the Fireflies” critique the concept of nationalism?

War is dangerous not just because of bombs and death, but because of the warped behaviors of those suffering its consequences. When society turns a cold shoulder to the most helpless members of its community, what does that say about its existence?

By the 1980s, Japan had recovered from the devastation of World War II and emerged as one of Earth’s dominant global economies. Their reconstruction was a success, but the fact the rehabilitation was necessary due to consequences stemming from their own stubbornness in the war is a truth that was not lost. Grave of the Fireflies (1988) speaks to the culture of skewed patriotism and selfishness that brought about such extreme devastation on the country decades earlier.

Civilian-targeted attacks were particularly prominent in Japan when America’s nuclear bombs and air raids were pushed by an American government eager to end conflict. As such, an increased feeling of victimhood quite rightly rose in Japanese communities. Philosophy in Film writes, “Despite this emphasis on the Japanese as victims, the themes in Grave of the Fireflies reflect the tension between national responsibility and civilian victimization in post-war Japan.” Seita (Tsutomu Tatsumi) and his sister Setsuko (Ayano Shiraishi) are personified by this duality as they attempt survival in the wake of bombs destroying their village, rendering them orphans. Setsuko is the picture of innocence, running and playing with childhood purity as she cannot comprehend the conflict surrounding her. Her imagination and creativity never falter as she slowly starves, develops diseases, and her health falters. She is a rather bold portrait of the horrors of war as it impacts the guiltless.

Seita is somewhat obsessed with his own pride and Japanese nationalist sentiment. We see flashbacks where he wears a military uniform and duplicates the posture of his military father—the same pose his father perfects in the photo Seita carries in his pocket. He clearly has ambitions of becoming just like his dad, one day joining the military, and serving as a honorable and contributive member of society. A scene finds him daydreaming about a naval review, with passing ships captained by grand navy men like his father, as Seita guns down imaginary aircraft in his mind. It is symbolic, of course, of the ongoing war in which Japan is losing, as well as Seita’s need to develop and maintain his masculinity through nationalized images.

Seita takes it upon himself to care for his sister, despite lacking the experience or knowledge on how to successfully do so. He believes his blind love for her and his desire to honor and emulate his father’s alleged grandeur will supply him the means of keeping her alive and well. But as the film opened with a rather clear picture of he and Setsuko’s eventual deaths, we know all along his efforts will, in one way or another, prove fruitless.

The firefly becomes a symbol in the film, representing both the fire bombs that destroyed the children’s town, as well as an icon of their hope and perseverance. But where Setsuko enjoys them more for their natural beauty, Seita finds them a symbol of wartime victory. Nationalism can be a strong and dangerous thing. World War II saw some of the most devastating results of uncontrolled nationalism the world has ever seen. Grave of the Fireflies avoids mention of those atrocities, and keeps its distance from the battle as a whole, instead taking a different angle on nationalism: the way it rippled through non-military society as selfishness and desperation. Many of Seita and Setsuko’s troubles stem from people growing more and more unwilling to lend a hand to those around them, focused on self-preservation instead of the community and human decency that are necessary in tough times.

Their aunt is a primary example. When the children first show up, she seems warm and welcome to their presence. The kids allow her to sell their mother’s kimonos to raise funds for rice. But after the aunt can find no more self-benefitting use in the children being there, she begins to turn on them. She instills guilt in Seita, calling him a “lazy slug” because he isn’t “working hard for our nation. Everyone has got to cooperate.” She plays the patriot card to make a barely-teenaged boy feel bad about wanting to eat the food purchased with money he raised, causing him to feel inferior to her own family members who serve. And of course, contributing to the ongoing battle is not the answer to their problems; it is the cause.

Philosophy in Films continues, “While Japanese culture in 1945 did promote concepts of community and the strength of the whole, it also ingrained concepts of blind nationalism and militarism into the minds of its people. Seita’s dreams of joining his father in battle reflect a ‘national fantasy of war’ that blinded him to the needs of his sister and community at large. Takahata criticizes these jingoistic ideals of Japanese society and the lasting effects that these ideals had on Japanese survivors. In this way, the film simultaneously portrays the Japanese people as victims and as active participants in the war. While the people are victims of nationalistic propaganda and wartime violence, they are also partly responsible for wartime atrocities through their abandonment of communal ideals and their selfishness masked by nationalistic fervor. This selfishness is most evident in Seita’s brief interactions with adults during the film. When Seita sneaks into a village to steal food, he is caught and thrown in jail. No one is interested in listening to his story because they are all struggling to survive. The civilian victims suffer more due to their change from communalism to selfish survivalism.” 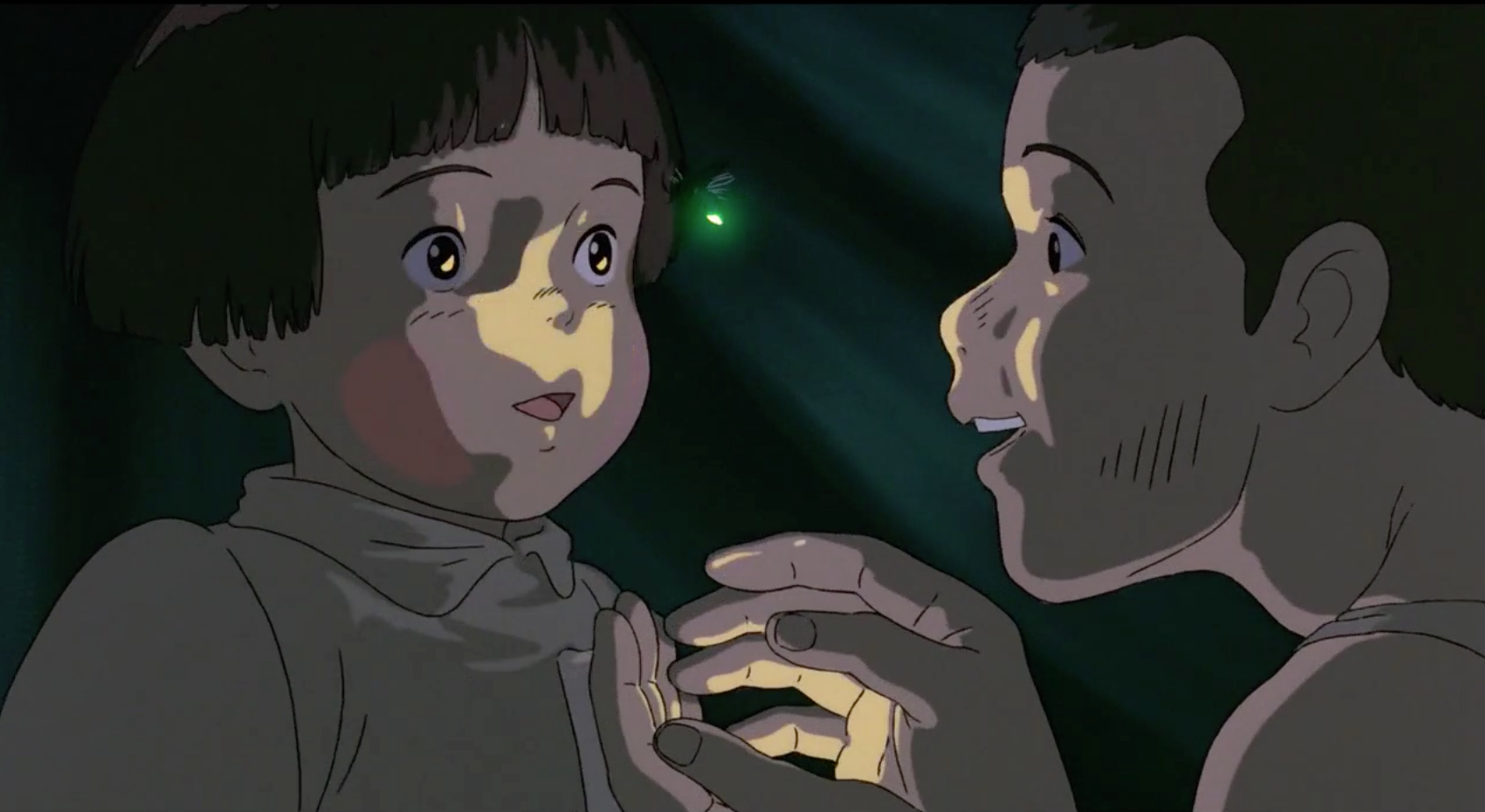 Seita puts his own faith in the military by assuming his father and his fellow soldiers will win the war, return home, and take care of everything. Of course, Seita is oblivious to the fact that his father is dead, Japan has surrendered, and the entire navy is at the bottom of the sea. When he finds out, his expression says it all: “We lost!? Japan! The Japanese Empire!” By the time he realizes his faith in the war effort was misplaced, it’s too late: Setsuko is too malnourished to be helped, and she dies of starvation. One way or another, Seita soon follows.

Based on an autobiographical short story by Akiyuki Nosaka, Grave of the Fireflies condemns the idea of people putting blind faith in patriotism. Seita was so deluded with the idea that he lived in an infallible world that he watches his sister, his greatest love, wither away without realizing time was running out. Nosaka’s younger sister died of malnutrition and the guilt he felt lived with him for decades. Grave of the Fireflies is his apology to her, as well as his portrait of innocence dying at the hands of Japanese wartime culture.

Legitimately, many in post-war Japan felt victimized by American attacks and casualties. But those feelings tended to minimize the culture’s perception of the damages it imposed upon itself. Seita and Setsuko embody victim and perpetrator. They are innocent victims of war, yet Seita’s misguided nationalism led to his sister’s death.