Does Seita in “Grave of the Fireflies” make the right decisions?

Hearing that opening sentence and watching a boy, timid and cold, dying on the floor of a quiet subway station, Grave of the Fireflies (1988) immediately sets its tone. The film may be animated, but is no cartoon.

A station attendant pokes the boy and the camera pulls back, revealing him to be one of many lost souls finding their fate against the station’s support pillars. The attendant searches him and takes the boy’s sole possession—a tiny tin can—and throws it out into the brush. Inside are the ashes of the boy’s sister, whose spirit emerges outside along with her just-dead brother’s, and the two lovingly embrace amidst a wash of firefly light. Everything seems right, and there is no indication that in truth, the boy unwillingly helped fuel his sister’s death.

Searching online for opinions of the film, it’s easy to come across scores of people asking why the boy, Seita (Tsutomu Tatsumi), didn’t make better decisions. Grave of the Fireflies is a war film detached from the war itself, focusing on the shattered lives of regular people as they handle the traumas of conflict. Japan’s role in World War II was one that inflicted pain and suffering on numerous other cultures. As a result, they became the most devastated victim of one of the battle they perpetrated. The duality of Japan’s wartime culture is represented through Seita and his child sister, Setsuko (Ayano Shiraishi), as they navigate the challenges of suspicion, prejudice, and pride following the fire bombing that destroys their town and leaves them orphaned. 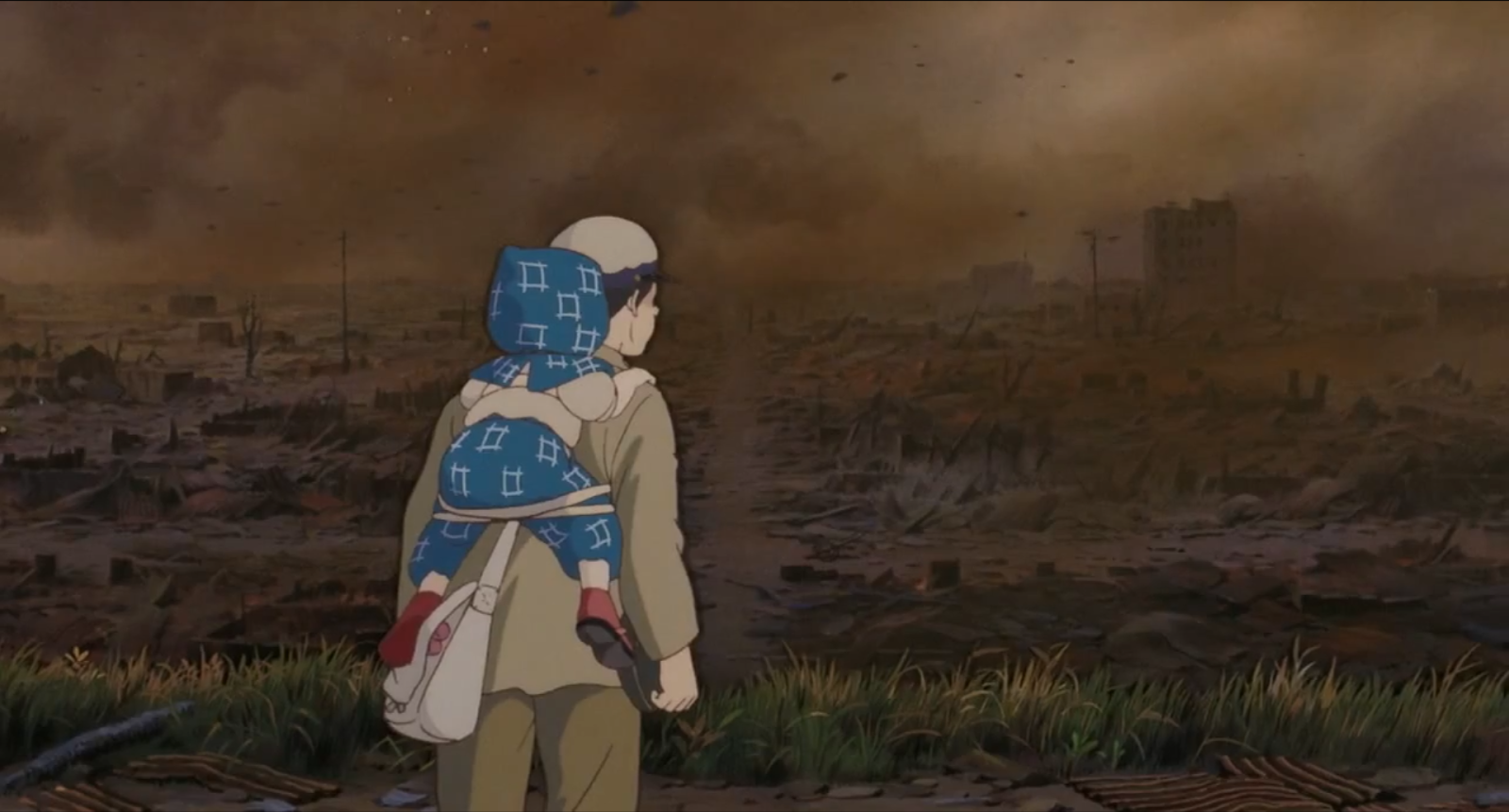 After the bombs fall, Seita makes the wise decision to move he and his sister to the home of a distant aunt. There, they are protected and fed—for a while. Her selfishness mounts gradually as time passes and rations grow scarce, to the point where she sells the children’s mother’s kimonos for rice money, then refuses to share it with them. Instead, she accuses them of being lazy freeloaders as their usefulness to her runs its course—particularly Seita, who she says should go to school even though it burned down, or that he should join the military even though he’s only 14. The tension within the house grows until Seita deems it in their best interest to get out, moving himself and his sister to an abandoned cave bunker.

It’s easy to look at the situation in a superficial way and agree with the aunt. Seita could have gone to find work and contributed to the family income in exchange for shelter and food. But theory and practice are one thing, and jobs for teenagers aren’t rampant in a war-devastated country with no resources. Further, Seita is the son of a military man. His father is mentioned repeatedly throughout the picture, and Seita carries a photo of him in his pocket—one of the only things he grabbed from his house as bombs were littering the sky. Seita obviously has great respect for the man, and as a teenager-turned-caretaker for his younger sister, he makes the decisions that he thinks are best while keeping his father’s sense of pride in tact. Seita wants to honor the strength of his absent father by caring for Satsuko himself. His behavior is an allegory for the stubbornness and pride of the Japanese people at the end of the war, swayed from admitting defeat even if it led to greater consequence. 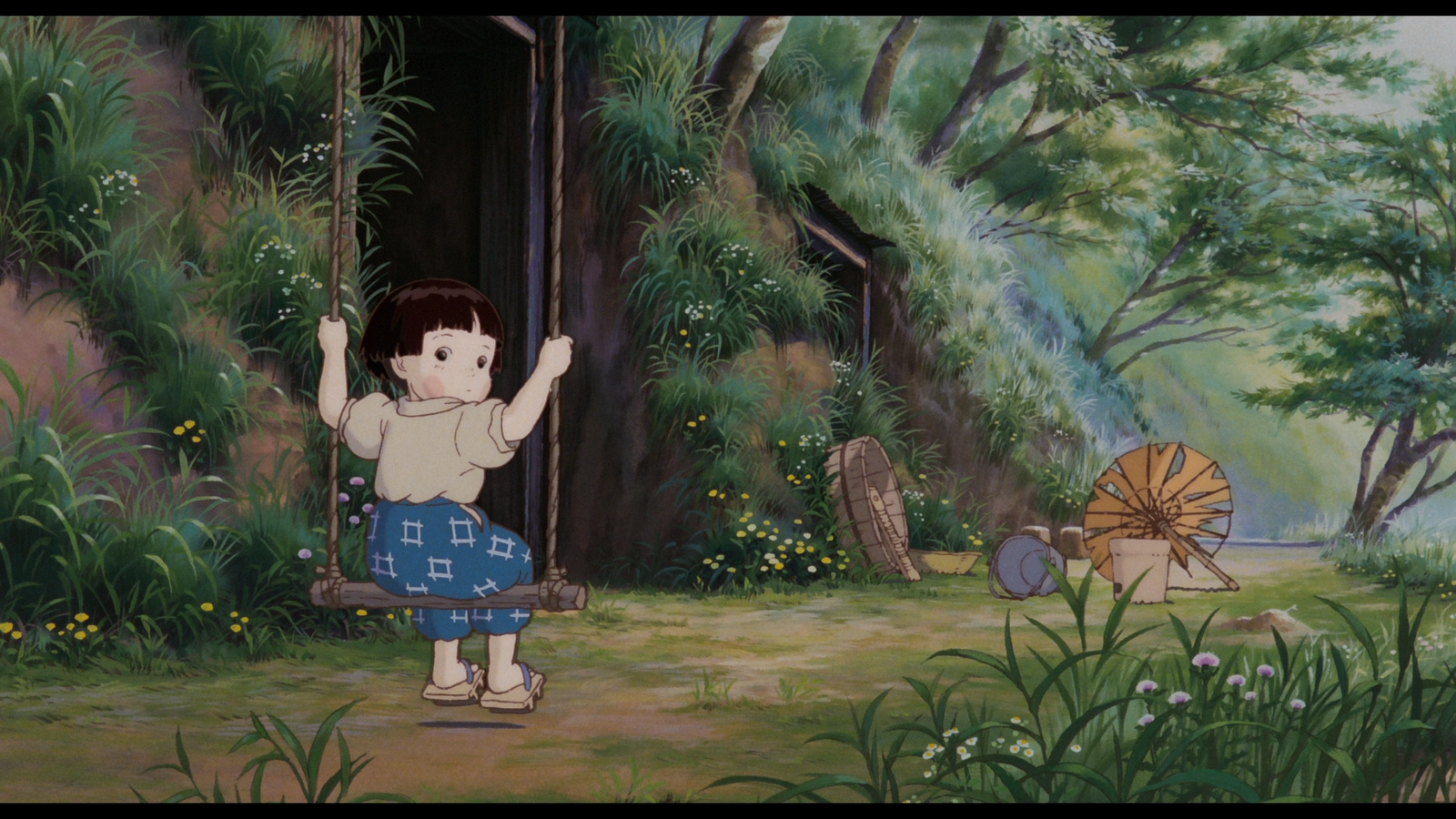 Roger Ebert writes, Grave of the Fireflies “tells a simple story of survival. The boy and his sister must find a place to stay, and food to eat. In wartime their relatives are not kind or generous, and after their aunt sells their mother’s kimonos for rice, she keeps a lot of the rice for herself. Eventually, Seita realizes it is time to leave. He has some money and can buy food—but soon there is no food to buy. His sister grows weaker. Their story is told not as melodrama, but simply, directly, in the neorealist tradition. And there is time for silence in it. One of the film’s greatest gifts is its patience; shots are held so we can think about them, characters are glimpsed in private moments, atmosphere and nature are given time to establish themselves…this film doesn’t exploit action; it meditates on its consequences.”

When Seita is eventually reduced to thievery, we sympathize with him. In this story, the innocence of Seita and Setsuko showcases hope for humanity. Setsuko runs and plays while being surrounded in destruction, too young and naive to understand the world in which she lives. Seita operates the way he feels he should as a brother, as a person, and as the son of a soldier. He doesn’t need to take his aunt’s suggestion and join the military—he is already there, a patriot to his own family. He just doesn’t have the experience to think things through to success.

The film doesn’t shy away from the reality that Seita ultimately lets his sister starve to death, and he blames himself for it. He has access to his family’s money in the bank, but doesn’t attempt to make a withdrawal until it’s too late. When he finally does, she’s past the point of no return, and there is little food left to buy even if she wasn’t. But even though he is significantly older than his sister, he is still just a kid without guidance or assistance. Of course he doesn’t make all the right moves, but that doesn’t mean his actions should be viewed without sympathy. Seita doesn’t actually know how to be brave or care for his sister, he merely feigns it on the back of pride because he loves her. 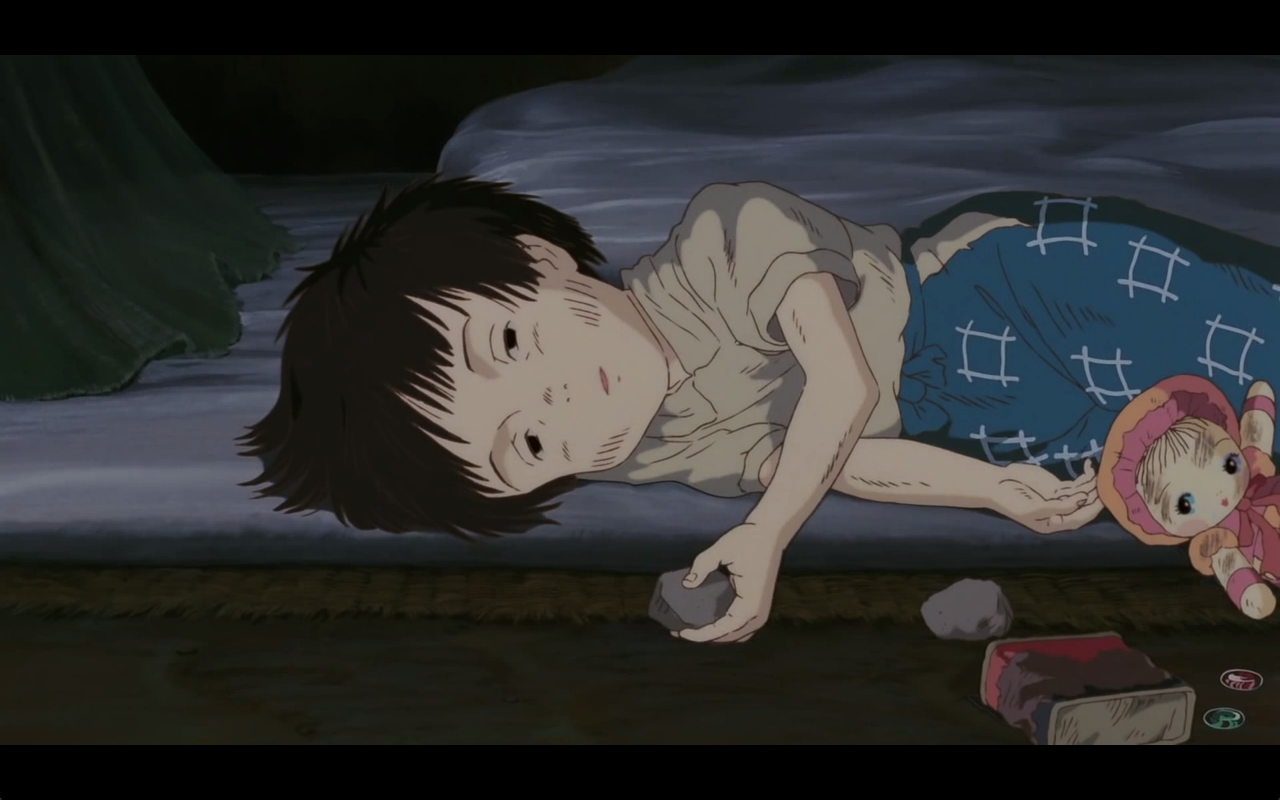 Where the Long Tail Ends says, “Grave of the Fireflies is an anti-war film, and a film about pride, and guilt and struggle, but it is also a film about love. Seita loves his little sister, and he is her world. The driving force behind his actions is his desire to keep her happy, safe and healthy, but good intentions are not enough to guarantee success. If not for his pride and lack of understanding of the world, he might have seen more options. Setsuko trusts Seita absolutely, and is besides too young to make any choices for both of them. The signs of her love for him are the simple gestures of a small child. They would be cute and funny in any other situation, but they are heart-breaking in this one.”

From the moment Seita stands above the bloodied corpse of his fallen mother, it’s obvious that above all, Grave of the Fireflies is an anti-war movie that conveys its messages through powerful images. Animation is the perfect medium for this story. What the film tries to convey is the human responsibility to one another as members of the same planet, especially in times of trouble. Seita finds no lasting assistance in his journey—once things get hard for people, they stop lending a hand. His aunt, farmers, doctors, they all turned on him as he and Setsuko became more desperate. These behaviors show self-involvement in what should be a time of selflessness; a literal illustration of human inhumanity. While Seita failed to save his sister or himself from the atrocities of war, he tried his best.