How do Jessica Walter’s Characters on “Arrested Development” and “Archer” Compare?

The wonderfully talented Jessica Walter is known for portraying two of TV’s most enjoyable bad mothers, Lucille Bluth on Arrested Development (2003 – 2006, 2013) and Malory Archer on Archer (2010 - ). Due in part to the fact that both are played by the same actress, many people – including Walter – have drawn parallels between the characters of Lucille and Malory. And the two mothers do share a series of notable traits.

For starters, both Lucille and Malory are high-functioning alcoholics. They are rarely seen without a drink, even first thing in the morning, and when they don’t have a drink they are both more than happy to let everyone around them know. 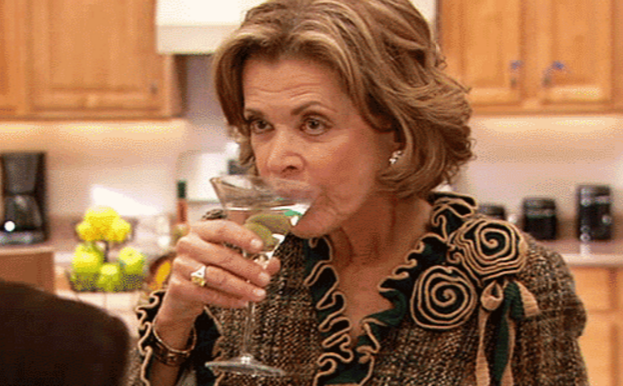 Lucille Bluth: “And you’re telling me there’s no alcohol? What the hell are we supposed to do for two days?” (S3:E12)

Malory Archer: “Get me out of this sweat box, because I am officially out of gin.” (S1:E8)

The mothers are also very sharp-tongued and don’t care who they offend, often saying cruel, brutally honest, classist or racist things without a second thought. Lucille more often than not uses her severe words to keep her family in line, while Malory uses hers more publicly, seeming to dare anyone to defy her. For example, when Lucille’s granddaughter asks if they can go out for ice cream in “Pier Pressure” (S1:E10), she replies “I don’t think so. That chubby little wrist of yours is testing the tensile strength of this bracelet as it is,” and when Malory wants her driver to start the car in “Blood Test” (S2:E3) she says, “If I wanted to sit around all day going nowhere, I’d be a teacher.”

Additionally, both characters are prone to attention-seeking exaggeration. Combining this tendency with their willingness to say antyhing, and you end up with shocking yet funny statements like Lucille’s “Everything they do is so dramatic and flamboyant. It just makes me want to go and set fire to myself” (S1:E1), and Malory’s “If I cared what you do on the weekend, I’d stick a shotgun in my mouth and pull the trigger with my toes” (S2:E8).

Matriarchs who have devoted energy to maintaining an elevated station in life, both characters are also extremely controlling. Lucille controls her family members and therefore the family business through manipulation, while Malory controls her business as the boss by overseeing her son and her employees with a hawk’s eye. “Even though Lucille tries to keep control, she doesn’t do as good a job of it as Malory,” Walter told The Daily Beast.

Both characters’ parenting styles leave something to be desired, and Archer and Arrested Development get many laughs out of the outrageously incorrect “bad mother” behavior. But Lucille and Malory are not simply neglectful; they relish in raising overly dependent children whom they can continue to control. This scheme is most clearly illustrated when Malory is babysitting Sterling’s (supposed) son Seamus, and she gives the baby a toy only to toss it away, then saying to the crying child, “What’s the matter? Did somebody trick you? See? That’s how the world works, dear, and I’m the only one you can trust” (S2:E5). Later in the episode Malory tells Sterling that, in parenting, “The secret is negative reinforcement.” 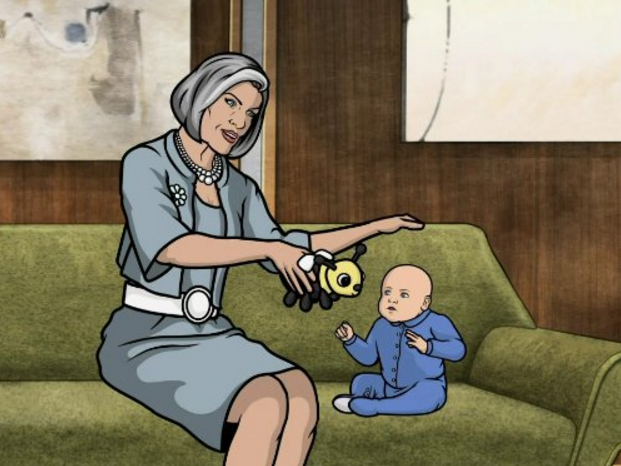 Meanwhile, youngest son Buster is so dependent on Lucille that despite being in his 30s he still lives with her, helping her zip up her dresses and even breathing in her exhaled cigarette smoke when her building adopts a no-smoking policy and her ankle monitor prevents her from going outside to smoke. 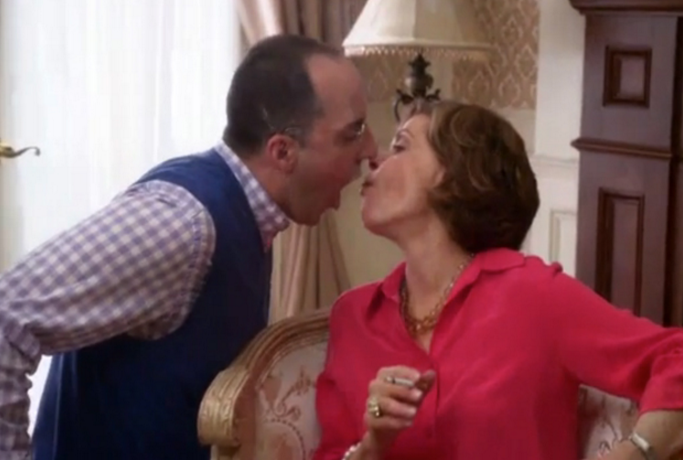 While Sterling does not live with his mother, she does pay for his apartment and servant and employs him. “I like my characters to have one son who’s very needy, otherwise I don’t take the role!” Walter joked to The Daily Beast.

Still, both mothers do seem to care for their sons, albeit in unconventional ways. In Arrested Development Lucille admits to Michael that she’s been a horrible mother and tells him, “You’re a good son. You always do things for others,” just before crashing the car and dragging him into the driver’s seat so that he takes the points on his license for her (S1:E8).

In Archer, Malory calls Sterling telling him not to alter a paternity test because “Even though I wasn’t always mother of the year, I can change, and you can change, and maybe together we could add up to one good parent for this baby” (S2:E3) after having told Sterling to tamper with a paternity test in the first place. While the two reveal strong affection for their families in fleeting moments, they are unskilled at (and almost allergic to) expressing sentiment on a regular basis, suggesting a long-standing emotional repression. As Walter told Indiewire, “They’re both mothers that don’t know how to show love to their kids.” (She added, “They’re both control freaks.”)

But we shouldn’t rush to lump the two together without distinction. Despite the obvious similarities, there are subtle but important differences between the two characters. While they both want money and to be in control, their methods of achieving their goals are vastly different. Lucille is the woman behind-the-scenes, pulling strings and setting up situations and people. As a woman whose money comes from her husband and who has grown attached to a glamorous lifestyle, she is dependent on others to maintain the life she desires and is often left vulnerable, as when she finds herself alone at her two surprise birthday parties (S1:E8) and eventually arrested for fraud (S3:E13). 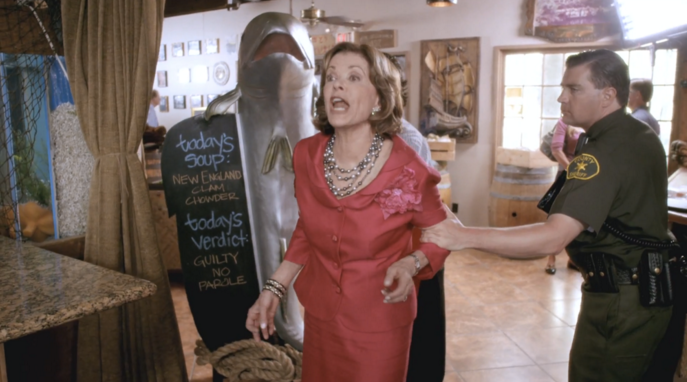 Malory, on the other hand, is a self-made success who runs her business, depending on no one and taking matters into her own hands. For this reason, she not only gets away with her numerous crimes, but she also convinces her employees to help her cover up murders on more than one occasion (S1:E4 and S3:E8), and they even stick by her after she gets them all arrested and turns the spy agency into a drug cartel (Season 5: Archer Vice). 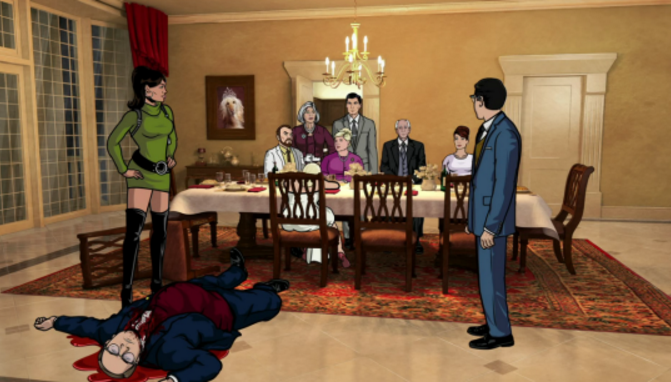 Walter elaborated on this crucial difference for Indiewire, “Malory runs a whole big business, and Lucille is not self-made; all of her trappings come from other people—from her husband, from manipulating businesses, not creating them. And I think there’s a big difference between somebody who’s self-made and somebody who’s just living off other people.” She added that “with Lucille, one of the main things I thought about was her goal is to stay in the lifestyle she’s accustomed to living in, and so what does she have to do to achieve that? Malory, she works for a living and she runs the business [...] she’s the boss. Lucille secretly is the boss, but her husband doesn’t know it. She’s the woman behind the man, pushing, grabbing.”

Also, while Malory doesn’t bother dying her grey hair, Lucille is more concerned with her looks, even getting cosmetic surgery in “Making a Stand” (S3:E8). Malory is more confident in herself and her looks and doesn’t feel the need to cover up her age.

For Walter, performing the two women is profoundly different due to the mediums. She continued to Indiewire, “when you do animation, you can be so much broader. You almost have to be, because there’s a certain energy to that kind of voice work, because that’s all you have, your voice, to make it work.” Because the animation requires that different approach, she said of acting as Marlory and Lucille, “I don’t relate the two at all.”

While both mothers are alcoholics who are aggressively mean, controlling and terrible parents, the control they wield differs in style and level of totality. Despite her constant attempts at manipulation Lucille has minimal control over her family, who see through and anticipate her designs, while Malory maintains total control of her employees, her son and her business. While Lucille uses her harsh words to try to keep her family in line but often alienates their affection, Malory uses hers to show that she is fearless and in complete control.

The result is two similar women in very different situations and shows: the humor in Arrested Development often comes from watching the family fall apart despite Lucille’s attempts to control her children, while in Archer it’s from watching Sterling and the others in unlikely situations because of Malory. Still, both result in hours of hilarious comedy.