A Film for Every Holiday: Talk like a Grizzled Prospector Day, “The Treasure of the Sierra Madre”

Observed every January 24, Talk Like a Grizzled Prospector Day was set aside to commemorate the 1848 discovery of gold in California. John Huston’s gold-fever classic, The Treasure of the Sierra Madre (1948), is the perfect viewing choice for this holiday, particularly for Walter Huston’s performance as the stereotypical grizzled prospector. In what many critics call his best film, John Huston crafts a story about the effects of greed on the human spirit and directs his father, Walter Huston, in a role that has become the model for the grizzled prospector stereotype ever since.

As the film opens, Fred C. Dobbs (Humphrey Bogart) is stuck in Tampico, checking the lottery numbers and tearing up his losing tickets. His last lottery purchase has left him flat broke; he is so down and out he’s reduced to panhandling. He wanders up and down the street, hitting up anyone who appears to be prosperous. His preferred line – “Can you stake a fellow American to a meal?” – usually bears fruit, until he unknowingly approaches the same sucker (played by Director Huston) three times. Irritated by Dobb’s nerve, the man points out that he’s already given money. Dobbs apologizes, telling him he never looks at the faces of those who give him handouts, only their hands and their money.

This remark gives us insight into Dobbs’ character: he is humiliated to have to beg for money and cannot look any of his marks in the face. However, he is not too embarrassed to spend the proceeds on non-essential items – once he has a meal and has secured a place to sleep, he also buys cigarettes, more lottery tickets and visits a barber for a haircut and shave. Afterwards, he goes out into the streets again to ask for more. It’s not that Dobbs is a bum – he will soon secure a position and show himself to be a hard worker. Until then, despite his temporary state of penury, his anger at his reduced state gives him a sense of entitlement, and this is how he justifies his somewhat slack ethics. 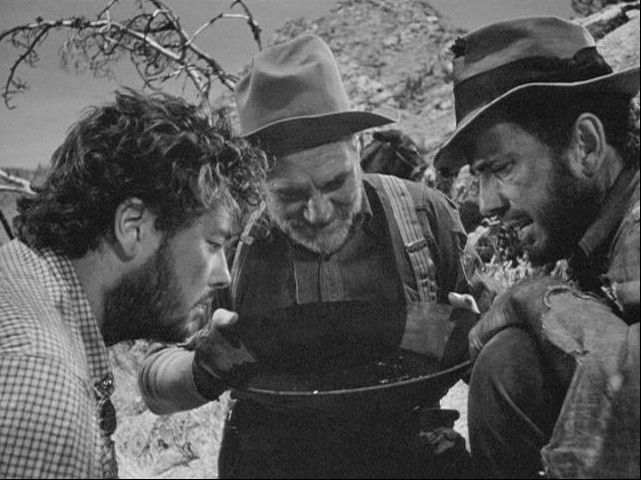 Dobbs meets Curtin (Tim Holt) at the town fountain and the two are introduced to Howard (Walter Huston) at a flophouse later that evening. Howard talks about mining for gold, and his speech (clearly inspired by the labor theory of value) details for the assembled how the value of gold is determined by its cost in terms of the hours of labor, as well as the time and efforts of those who perform the labor. Curtain and Dobbs listen, but are not impressed. Afterward, Dobbs ruminates on Howard’s words. He tells Curtin that the gold itself doesn’t carry any curse - it all depends on the morality of the individual. However, we get the impression it’s himself he is trying to convince. Dobbs is now seriously thinking about prospecting for gold, and he convinces Curtin to come along. They join forces with Howard, and Dobbs is found by the boy (a young Robert Blake) who sells the village lottery tickets. He tells Dobbs his last purchase was a winner, and the amount Dobbs wins is enough to fund their venture. Dobbs is generous now and adamant that what they find in gold will be divided three ways, regardless of the setup cost.

The three reach their destination and set up their mine. After a few months of hard labor, they find gold, and begin to store it up, dividing it in thirds as agreed. Trouble begins when a newly suspicious Dobbs fears that the others will steal his share, and suggests each man hide his portion in a place known only to himself. Curtin becomes vulnerable to Dobbs’ suspicious nature, and even Howard is uneasy about the change this causes to their partnership. The three have been operating openly in a spirit of camaraderie and generosity, even saving each other’s lives during a mine shaft collapse. Now, the atmosphere is one of suspicion and fear.

Their situation deteriorates further when they are joined by Cody (Bruce Bennett), who forces them to take him on as a partner. The three face an important moral dilemma at this juncture – Dobbs is in favor of shooting the interloper, but Curtin and Howard are reluctant to resort to murder. Finally, Curtin agrees to kill Cody, and Howard acquiesces only because he is outvoted. However, they are accosted by banditos, and they use Cody as a fourth gun to help run them off. Afterward, they shoot and bury him. 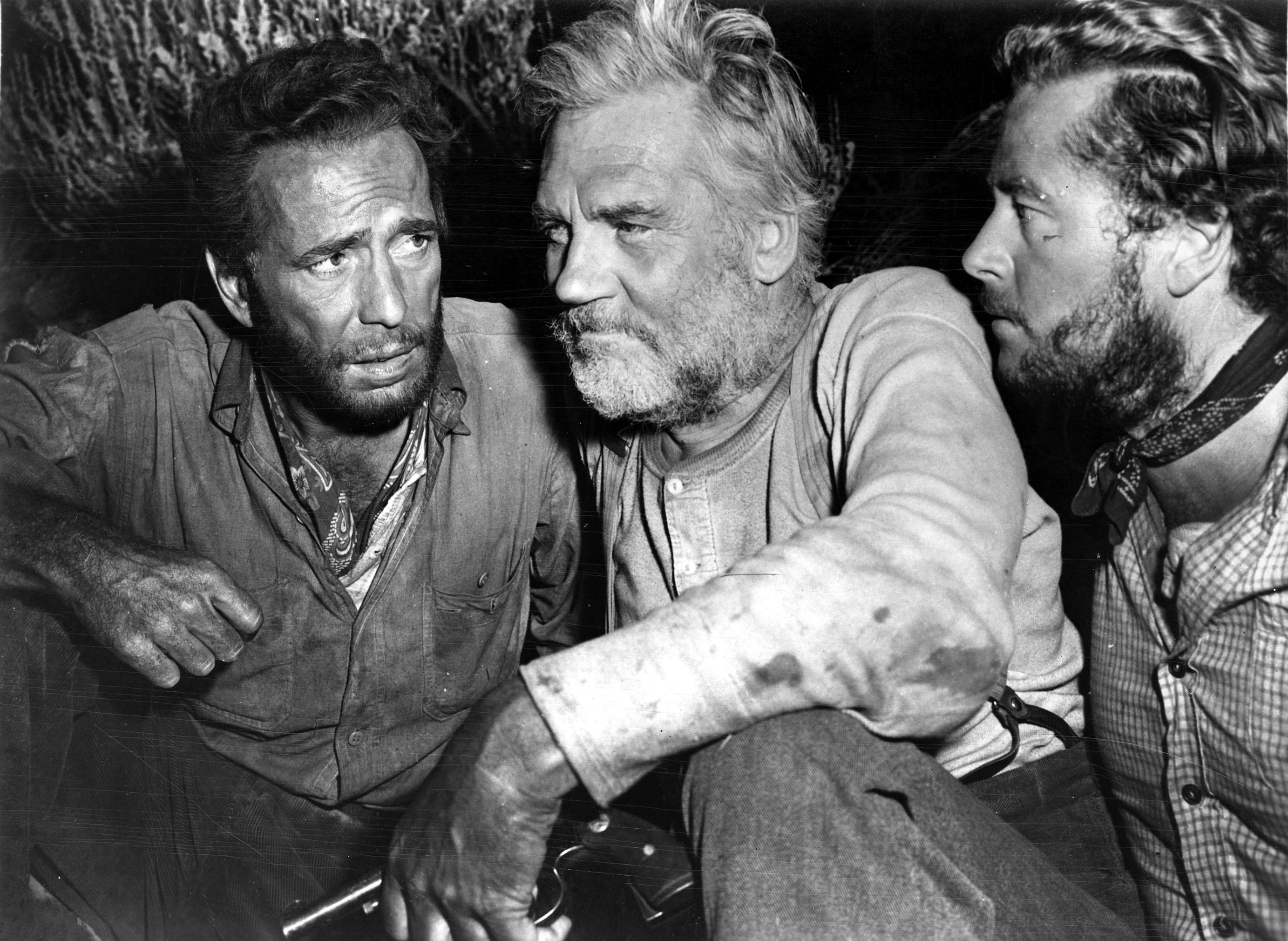 Almost a year later, they have the gold they want, though Dobbs keeps increasing the amount he wants to amass, and we realize he will never have enough. If left to his own devices, he would mine the gold for years to come. Despite Dobbs’ economic self interest, Howard and Curtin have both had enough, and all agree to halt operations and go their separate ways. Dobbs’ suspicions take a turn for the worse soon afterward and, accusing Curtin of wanting to murder him for his gold, he shoots Curtin and steals his gold, then leaves him for dead.

Howard and Curtin escape with their lives, but Dobbs, due to his greed, dies in the desert, murdered by bandits for his burros. The numerous bags of gold dust the burros carry are slashed – the banditos have no clue of their value and we watch as a fierce wind scoops their contents out of the bags and whirls it around before giving it back to the ground. In the end, we see that Dobbs, with his vulnerability to corruption, was right all along: we cannot blame the gold itself for corruption, only the person whose weak value system allows them to be corrupted.