Quick Answer: The idea that Stanley Kubrick was hired by the US Government to fake the Apollo 11 moon landing is one of the best-known conspiracy theories in film and popular culture. Many have interpreted The Shining as Kubrick’s subtle confession of the hoax, and believe it is littered with clues that prove his involvement. But does the so-called “evidence” add up to anything solid?

Film conspiracy theorists find their match made in heaven with director Stanley Kubrick, as the detail-oriented nature of Kubrick’s artful material invites endless analysis for subtextual meaning. Of all the conspiracy theories surrounding Kubrick’s various works, none exists with greater infamy than the idea he was hired to fake the Apollo 11 moon landing in 1969. A theory that extends beyond film analysis and into popular culture, the idea is so well-known it has served as the foundation of other films, like mockumentary Dark Side of the Moon (2002) and the 2015 comedy Moonwalkers, starring Rupert Grint and Ron Perlman.

Theorists speculate that after Kubrick’s masterpiece science fiction work 2001: A Space Odyssey (1968), which they view as an R&D project to see if faking the moon landing was possible, the government figured if that anyone could fabricate a believable-looking studio-produced telecast, Kubrick was the guy. There are those who believe that what was seen on television on July 20th, 1969, was not footage of Neil Armstrong walking on the moon, but a carefully-crafted production staged by Kubrick using a lighting technique known as front projection—a strategy with which Kubrick was very familiar.

Conspiracy theorists believe The Shining (1980) is littered with clues that serve as Kubrick’s confession of this forgery. After a decade of lies and covering up the truth, they argue, The Shining is the director’s catharsis.

The film has been viewed from so many angles that hardly a frame has not been put under the microscope in order to extrapolate greater meaning. An entire documentary, Room 237 (2012), directed by Rodney Ascher, is dedicated to theories about The Shining and its hidden messages. In the documentary, theorist Jay Wiedner, the godfather of Kubrick-faked-the-moon-landing conspiracy “evidence,” showcases all the ways Kubrick used The Shining as an apology vessel for the way he duped the world 11 years earlier. Michael Wysmierski suggests the same in The Shining Code 2.0.

Theorists like Wiedner and Wysmierski believe America felt it necessary to one-up Russia in the space race, so they hired Kubrick to “get them” to the moon. In their reading of The Shining, Jack Torrance (Jack Nicholson) represents Kubrick himself, while the Overlook Hotel would represent America. In making The Shining, Kubrick altered Stephen King’s source material so much that, to this day, King loathes Kubrick’s version, so it’s true at least that Kubrick did remake The Shining into a new story of his own. But, from there, most of these “evidence” for the Shining-as-confession theory go like this: for the first hour of the film, the manager of the Overlook Stuart Ullman (Barry Nelson), Wendy (Shelley Duvall), and Danny (Danny Lloyd) are all wearing red, white and blue. The hotel, says the manager, was built on Indian burial grounds, much like America itself. And the hotel is covered in Native American imagery, eagles, and—wouldn’t you know it— Ullman has an American flag in his office. 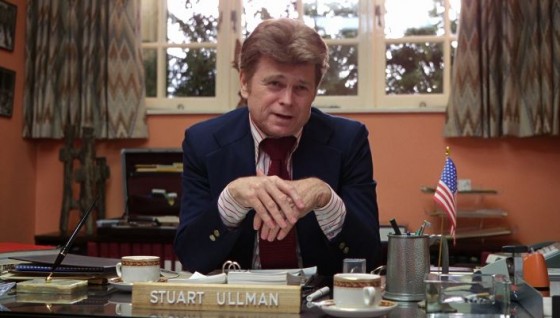 This guy is America

Later, as Danny is playing with toys in the hallway, he wears an Apollo 11 sweater. After a red ball mysteriously rolls toward him, he rises. The hexagonal pattern (symbolic of NASA’s launching pads) on the carpet changes direction, not because of a continuity error (as theorists suggest the infallible Kubrick was impervious to) but to symbolize Danny being trapped by what is about to come. He rises (his sweater rocket “launches”) and he enters room 237. The room was 217 in the book, but theorists claim Kubrick changed it to 237 to represent the 237,000 miles between Earth and the moon—even though NASA says the distance is more than that. (Others say that the Timberline Lodge, one of the film’s primary shooting locations, requested that Kubrick not use their Room 217 to ensure future guests wouldn’t be afraid to stay there; instead, Kubrick substituted a non-existent room, 237.)

Danny “blasts off” from the rug

In the Shining, Danny is horrified by the room, but later, Jack enters on his own and then lies to his wife about having been in there. With Jack a stand-in for Kubrick, this theoretically mirrors the way Kubrick lied to everyone about Apollo 11.

Other bits of “evidence” include:

Does any of this mean anything? It seems overwhelmingly likely that it doesn’t. But the never-ending analysis of Kubrickian works encourages uniquely far-fetched theories. Still, while people manage to find meaning in the minutiae of Kubrick’s films, it’s hard to believe that even a director with Kubrick’s intellect and obsessiveness would be loading such strange secret messages into the most obscure details of a small number of frames. Even if we argue that some of the observations of Apollo 11 references are more than coincidental (and a number of the examples of “evidence” don’t appear to pass that test), there exists no proof that the allusions to outer space are anything more than thematic associations or evocative imagery. References to the US and Native American burial grounds have more direct relevance to the story outside of any discussion of the moon landing. Ultimately, the leap to interpreting The Shining as a hard confession of faking the moon landing is an unearned conclusion.