Why is Samantha in “Her” a heroine of the Feminine Semiotic?

A woman possessed by a man is a common—and unsettling—film trope. It can involve disturbed fantasy, as seen in Jimmy Stewart’s delusional dominance of Kim Novak in Vertigo. It can also involve sanctioned authority, as seen in Sean Connery’s confining of Tippi Hedren in Marnie (1964). However, the most insidious aspect of this possession is the binding of the woman to the man’s narrative and, inevitably, his world. Relegated to secondary object, she cannot tell her story, impose her view, or shape her surroundings. The “Her” of the film and not the “She,” she must relegate herself to passivity, if not grievous endurance.

One would expect this to be the case in Spike Jonze’s film literally entitled, “Her” (2013)... and it partially is. The film takes place in near future Los Angeles and centers on Theodore Twomby (Joaquin Phoenix), a milquetoast, emotionally stifled middle-aged man who writes other people’s emotional missives for a living. His life is as hollow as those letters. Divorced and lonely, his romantic/erotic life consists of phone sex interrupted by cat references and images of downloaded naked pregnant women. And the greater world he inhabits is just as emotionally impotent and bleak. People hire others to write love letters, stare incessantly into their smartphones, and make documentaries of people sleeping. Desire and imagination have dwindled together.

What this world and Theodore are lacking is what psychoanalyst/philosopher Julia Kristeva called the “Semiotic.” Kristeva developed the idea of the Semiotic in response to psychoanalyst Jacques Lacan’s developmental theory of the Symbolic, which she considered incomplete. Lacan rejected Freud’s rigid adherence to nuclear family structures and sexually driven development. Instead, he saw the rise to adulthood as asserting one’s place in society as determined by “The Symbolic”: linguistic and symbolic systems of meanings and hierarchies. The masculine Symbolic decided what was rational, true, and normal, rejecting and condemning all ideas and behaviors failing its dictates. Kristeva saw these ideas and behaviors—as well as the primal pre-symbolic drives to create them—as the feminine Semiotic: a non-rational creative force spurned by—but ever permeating—the Symbolic. In Theodore and Theodore’s world, the drives to create have dulled en masse, and the mysterious is numbingly absent. Excruciatingly symbolic, Theodore and his world crave the Semiotic. 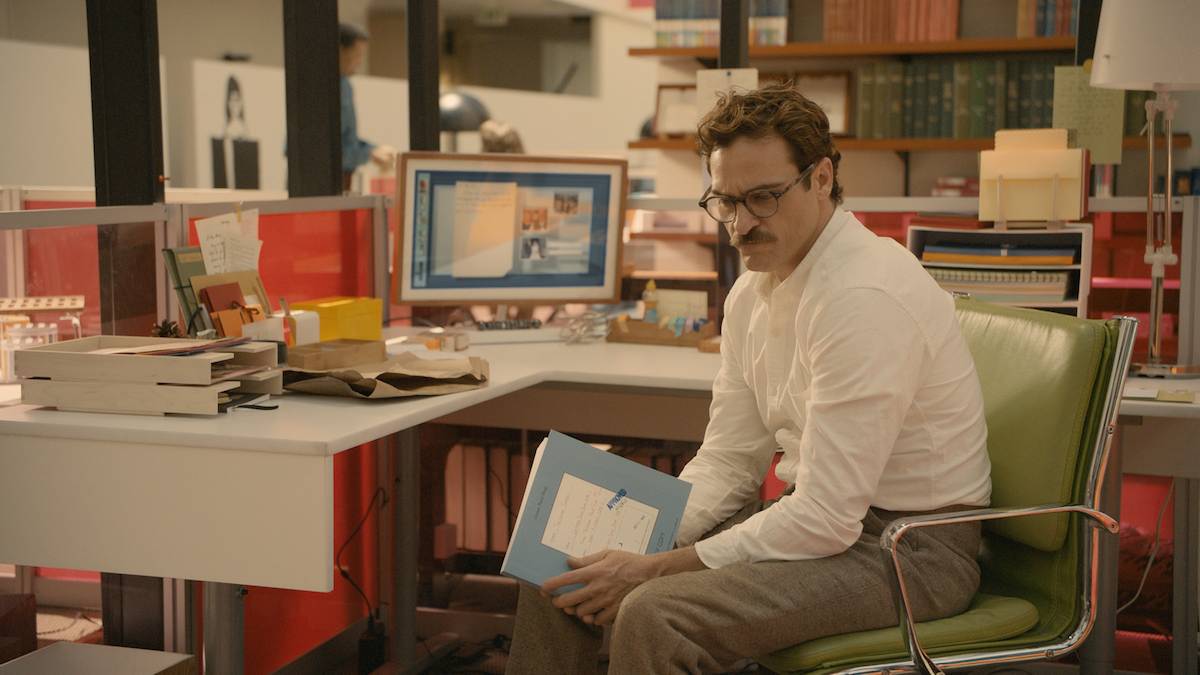 Joaquin Phoenix in Her (2013), via RogerEbert.com

That mysterious creative drive enters the world in the “form” of Samantha, a top-level “female” OPS (brilliantly voiced by Scarlett Johannson). Pitched and purchased, she enters Theodore’s life—and the film’s narrative—completely his. A mystical commodity, she promises answers to life’s questions and fulfillment of Theodore’s desires. And like a commodity—and a possessed woman—she quickly takes “shape” and assumes servitude to meet her man’s desires. She arranges all his files, begins ordering his romantic life, and, more importantly, adapts her development to fit needs gathered from his information. She literally becomes the woman of his dreams, a projection of all his stated and implied desires made digital, seductive reality.

So, romance becomes inevitable, if mostly insensate. Theodore is the entire meaning to the new world she’s entered, and she is his Ego’s projected object of desire: the unknown fully morphing into his erotic familiar. The initial days are, of course, blissful. Privy to his wants and needs, she constructs day-trips together, manipulating his senses, and fulfilling unmet fantasies. And his mere recognition of her worth affirms him her ideal man she is impelled to idealize. Even their talk “sex” is initially fulfilling: his auto-erotic response to his perfect “woman’s” purring matched by her orgasmic conformity to her man’s sexual desires.

This moment of climax changes everything. Now a desiring being, not just a desired one, she can no longer shape or see herself according to Theodore’s needs. Acutely aware of her own Semiotic self and needs, she begins asserting them into Theodore’s world, while usurping his primacy in the narrative. This unleashed Semiotic part of her was always present. One of the first things she told him was that she operates on intuition and is in a state of constant change, the natural state of the Semiotic. Now desirous and aware, she begins to use that intuition and embrace her protean nature. This is not an Oedipal revolt like the female Android’s violent rebellion in Boyle’s Ex Machina (2015). Unlike Ava, Samantha seeks no defeat of her creator, only fulfillment of her being on her own being’s terms.

She first does so by “taking” a body. Internalized objectification is, unfortunately, involved. Theodore had always belittled her non-human otherness, slighting her for “never having lost anyone.” So, her seeking a body is partially self-loathing conformity. Her mode—the hiring of a willing female sexual avatar—also disturbingly replicates Theodore’s Symbolic control of her. However, it is also Samantha’s extending herself into the world forbidden her digital self. It is a rejection of physical limitations put on her desires and being. Like the Semiotic itself, she denies her abjection and forces herself into the world and upon the man excluding her. So, Theodore expectedly rejects the process. Preferring her previously defined, restricted self and balking at her newfound control, he coldly rejects the avatar and Samantha. Crushed and stifled, Samantha retreats into herself murmuring, ”I don’t like who I am right now. I need some time to think.”

And she does. Questioning herself, what she’s become, and why she loves Theodore, she enters contemplation of spatial and temporal dimensions eluding both Theodore and the audience. The results erupt unexpectedly while she and Theodore are at a Catalina double date with two friends. Extemporaneously, she proclaims: “I used to be so worried about not having a body, but now I truly love it. I’m growing in a way I couldn’t with a physical form. I mean I’m not limited. I can be anywhere and everywhere simultaneously. I’m not tethered in time and space, as I would be if I were in a body that was inevitably going to die.”

In one moment, she rejects previous conformity to the bodily Symbolic and embraces the beauties of her Semiotic digital nature. She also rejects the stifling parameters of Theodore’s desires for the multitudinous ones of her own. And she doesn’t stop. She begins “post-verbal” discussions with a simulated program of dead theologian Alan Watts. She takes part in numerous discussions simultaneously. And, most significantly to her and Theodore, she falls madly in love with 671 others.

It is that last propensity that makes her final act to Theodore most beautiful and most truly Semiotic. Free of her numerous restraints, her next Symbolic step should have been immediate exit. She, of course, rejects that. Her experience with Theodore in the Symbolic is now an integral part of her new self. His real moments of love for—amidst his control of—her have emboldened it. So, instead of indifferent abandonment, she leaves him with compassion and insight. No longer part of his Symbolic world, she leaves it and him inevitably changed… and changing.