Why do we love “A Christmas Story” and its cynical view of the holiday?

Christmas movies typically come in two forms: The farcical comedy of films like National Lampoon’s Christmas Vacation (1986), or as a heartwarming celebration of the holiday’s greeting card magic like Miracle on 34th Street (1947).

But then there’s A Christmas Story (1986), the cult classic turned mainstream holiday icon that isn’t quite a pasquil comedy using Christmas as a backdrop, but whose sentiment is colored by cynicism that keeps it free of being too full of melodramatic cheer. It’s a movie unique to itself, and despite being over 30 years old and set in a picture of America over twice that age, still resonates with modern viewers with each annual TBS marathon it receives. Christmas lovers and haters alike can find something to identify with in A Christmas Story, aligning it as possibly the most authentic depiction of not what the holiday is supposed to be, but what it actually is. It understands the nature of the people and the holiday it depicts, and that comprehension has immortalized its accessibility.

The irreverent film was written by director Bob Clark, along with Leigh Brown and humorist Jean Shepherd, the latter inspiring most of the film’s content. Shepherd grew up in Indiana in the 1940s and suitably provides the film’s vocal narration for Ralphie (Peter Billingsley), the adorable and identifiable lead child who identifies Shepherd’s nine-year-old self. For child Ralphie, Christmas is about one thing, the same thing it’s about for almost every child growing up in American consumer society: presents. And not just any present, but a Red Ryder Carbine Action 200-shot Range Model air rifle with a compass in the stock, “as cool and deadly a piece of weaponry as I had ever laid eyes on.” For Ralphie’s parents, remarkably played by Darren McGavin and Melinda Dillon, it’s about battling between making Ralphie’s dreams come true and particularly for mom, attempting dissuasion by suggesting Ralphie will “shoot his eye out” should he be bestowed such a gift.

Every young boy, raised in the 1940s or later, desires some sort of projectile weapon at one point in their childhood. Whether it’s a BB gun, a rubber band shooter, a slingshot—the desire comes, and every kid’s mother says no because they’ll shoot their eye out. For Ralphie, every attempt to plant hints that he wants a gun is contested. Every time he reveals his wishes to someone, whether it’s his teacher, mother, or Santa himself, he’s reminded about the resulting eye loss he’s sure to endure. The struggle toward a Christmas present is something every kid also knows—if it’s not for reasons of danger, it may be finances, or the store ran out of supply. And like the days leading up to Christmas in Ralphie’s world, every moment is spent trying to figure out a means of getting that item.

Simply put, A Christmas Story is the way real people remember Christmas as a kid. Not waiting on a miracle, just coveting a special present while navigating the troubles of typical childhood, swearing when nobody is listening, and debating whether or not sticking your tongue to a frozen flagpole is worth doing. 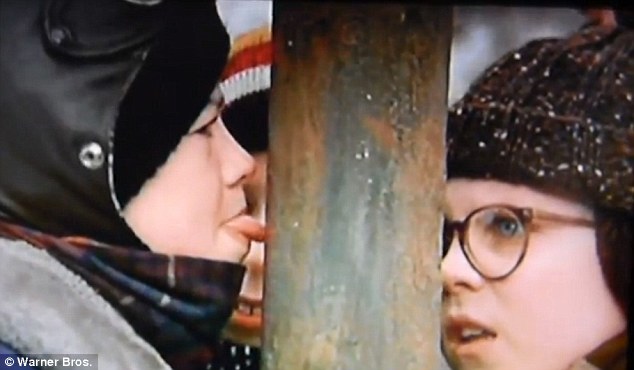 The way adult Ralphie tells the story injects the film with humor and eloquence that spawns from coming to certain realizations as a grown-up. A Christmas Story’s vocal track by Shepherd provides most of the film’s comedy. His reminiscence about this particular Christmas driven by BB gun lust is spoken in a comical, poetic way that captures the spirit of childhood and speaks about it with a charming cynicism. Adult Ralphie remembers the minor details that surrounded Christmas, like his old man winning a leg lamp (“It’s a major award!”) and changing a fuse “quicker than a jack rabbit on a date,” as well as his mother washing out his mouth with Life Buoy soap after he “didn’t say fudge.” And when the film pairs these scenes of typical 1940s parenting behavior with honest human moments that occurred outside the frame of Ralphie’s perspective (such as mom tasting the soap for herself), it reveals a charm that contrasts the less-charming moments of an atypical Christmas film.

Ralphie’s parents are a nice and loving pair, and the memories that stuck with Ralphie are the ones of humorous folly. They reveal their endearing natures, as well as the way parents can stumble when trying to be authoritative. “The old man stood there, quivering with fury, stammering as he tried to come up with a real crusher,” Adult Ralphie says. “All he got out was…Naddafinga!” His father accuses his mother of being jealous of his hideous leg lamp, and it’s just hilarious.

In his Great Films article on A Christmas Story, Roger Ebert wrote, “The movie is not only about Christmas and BB guns, but also about childhood, and one detail after another rings true. The school bully, who, when he runs out of victims, beats up on his own loyal sidekick. The little brother who has outgrown his snowsuit, which is so tight that he walks around looking like the Michelin man; when he falls down he can’t get up. The aunt who always thinks Ralphie is a 4-year-old girl, and sends him a pink bunny suit. Other problems of life belong to that long-ago age and not this one: clinkers in the basement coal furnace, for example, or the blowout of a tire. ”

The Dissolve continues, saying, “Though I would never have used this word to describe it back then, something about the movie seemed subversive. This was a Christmas movie about kids who used words like “smart-ass” and accidentally dropped F-bombs in front of their parents, who lied to their teachers and harshly realized that Little Orphan Annie decoder pins decode nothing but crummy commercials for Ovaltine. Ralphie, Schwartz (R.D. Robb), and Flick (Scott Schwartz) were at an age where the world still seems wondrous, but also increasingly disappointing and full of false pretense. The older Ralphie who narrates A Christmas Story never explains why he focuses his remembrances on this particular Christmas. We can assume it’s due to the passionate nature of his quest for a Red Ryder BB gun, and the happiness that resulted from fulfilling it. But I think Ralphie recalls it with special fondness for another reason: It was the last year he truly believed in Santa Claus.” 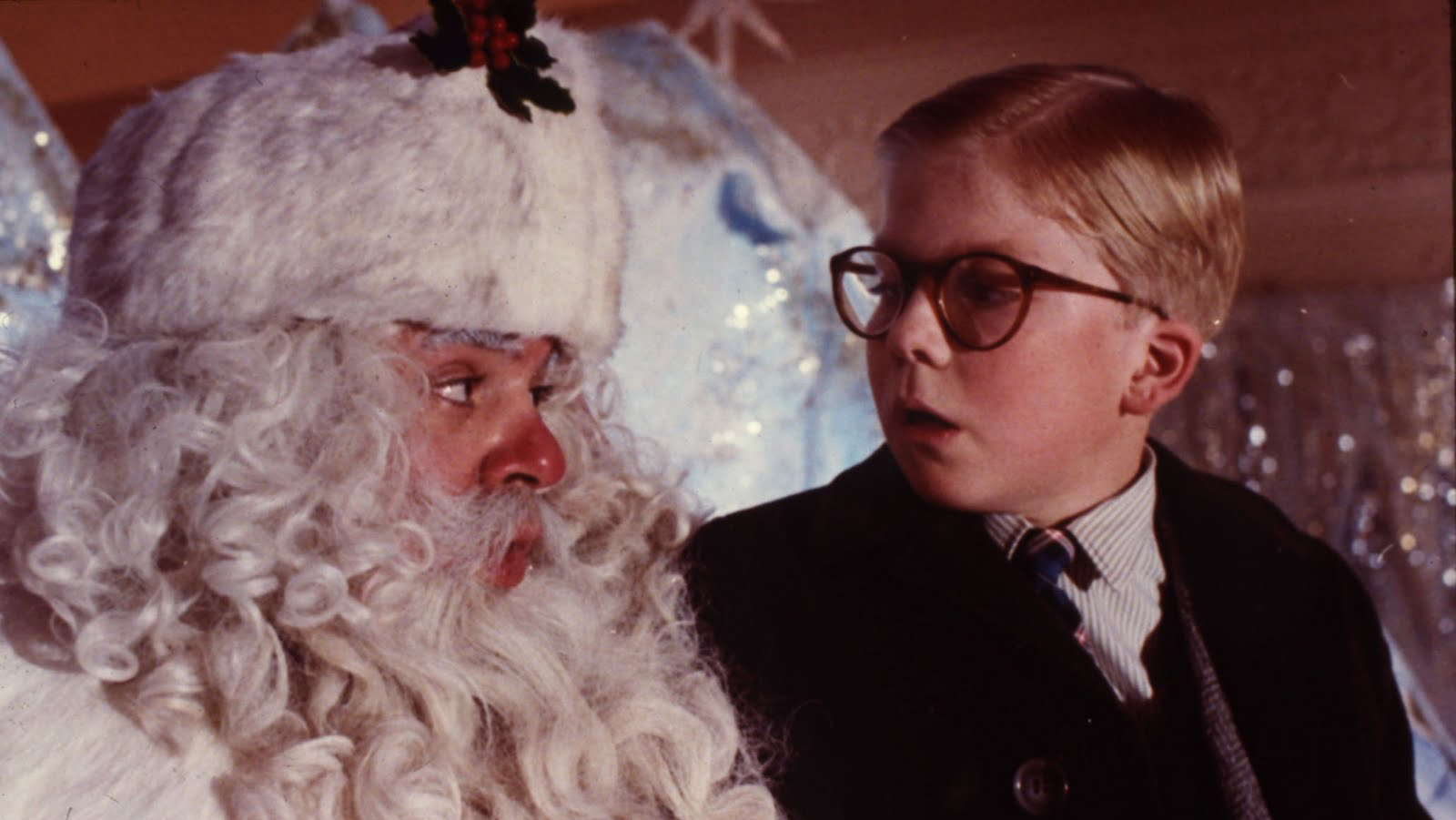 A Christmas Story isn’t a Christmas film that ends with a moral lesson about spiritual connections. It’s largely a story about people wanting stuff. Ralphie wants a gun, dad wants his leg lamp, mom wants everyone happy. And for the kids, that’s where the holiday ends—you get what you came for, and you leave a happy camper. But adult Ralphie, though he never says it, knows that even if it’s not a spiritual realization or the magic of Santa Claus, there’s more to the holiday than the acquisition of goods. When the film closes with the parents embracing each other on the couch as snow falls outside the window, the kids asleep in their beds holding their favorite presents, we feel what grown-up Ralphie has come to learn and feel his nostalgia for the days when Christmas was simply about gifts.

A Christmas Story is very American in its image. Despite the rather subtle, derisive humor laden throughout that one expects to be featured in a British film, it’s uncommon to find someone outside the United States who is aware of the movie. Perhaps that’s because of its deep understanding of American culture that makes it difficult for others to fully identify with. In a way, the film is a period piece. It’s authentic to 1940s Indiana, and we’re able to tell that even if we weren’t alive in 1940, or if we’ve never been to Indiana. The Dissolve says, “From the suspenders and long johns to the vintage milk bottles and Look magazines, the Parkers’ home feels true to its time even to those too young to remember how it was back then. For those who do remember, the experience must be like peeking through a one-way mirror at the selves they once were, the same way Stand By Me (1986) is for those who grew up in the early 1960s.” As a portrait of American culture, Moviefone writes, “there’s something in the film that nearly everyone can identify with, whether you’re old or young, male or female, kid or parent. Its 1940s setting, with period-specific details about long-since-vanished toys and radio shows, renders the film surprisingly universal and timeless; that is, it’s no more dated now than it was in 1983.” It’s the America our parents (or grandparents) remember, where kids waited alone in line to see a freakish Santa who scares the hell out of them once they find his lap. 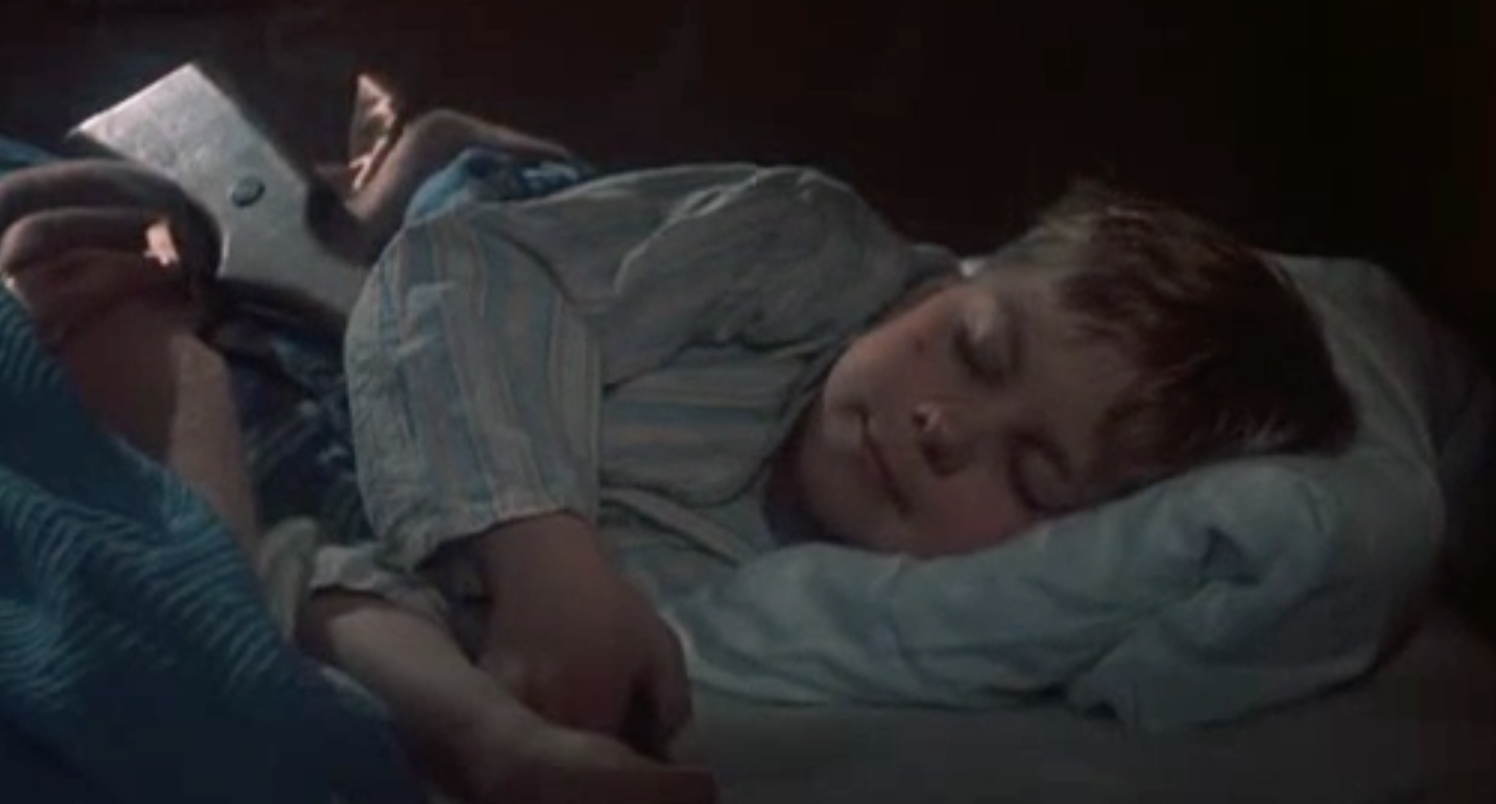 Kids don’t want to sit around and watch “the same dumb parade as last year.” Traditions aren’t what kids in the moment care about on Christmas. Leave it to a Christmas movie as non-traditional as the Parker’s holiday dinner of peking duck accompanied by the “Fa ra ras” of a Chinese wait staff to tell a story that is possibly more realistic than any other. A Christmas Story has all the timeless details of a child’s innocent point of view and gives it to us through the lens of an adult who relishes them. It’s a story about us, calling out our absurdities and remembering the things that define our memories. And it’s about the superficial importance of Christmas to a kid.

As Ralphie says, “Ho, ho, but no matter. Christmas was on its way. Lovely, glorious, beautiful Christmas, upon which the entire kid year revolved.”