What was the first film sequel?

Quick Answer: The Fall of a Nation, Thomas Dixon Jr.‘s follow-up to D. W. Griffith’s Birth of a Nation, is widely considered to be the first film sequel. However, some argue that Fall isn’t a true sequel to Birth, as it doesn’t follow a similar story or include any of the same characters. Using those additional criteria, Rudolph Valentino’s Son of the Sheik, which followed from The Sheik five years earlier, would be first. If we include short films in addition to features, a Danish Sherlock Holmes series from 1908 - 1910 predates even the Griffith/Dixon films.

These days, it seems like every movie in the theater is a sequel or a remake. If an original movie is a sufficient commercial success, it’s almost guaranteed to produce a sequel a few years later. Sequels are such a crucial part of the current Hollywood business model and landscape of filmmaking that it is tough to conceive of a time when they weren’t the norm.

In reality, while sequels have been made throughout the history of film, they didn’t really take off as standard practice until the 1970s. Prior to that decade they were exceptions to the rule, not regular productions. The 1960s saw the birth of franchises like James Bond and The Pink Panther, where sequels were connected only in name and not in story. The 1970s saw the origin of the sequel as we know it today, with films like The Godfather: Part II (1974), French Connection II (1975), Jaws 2 (1978) and Rocky II (1979) showing how sequels could give audiences an expansion of the story they loved the first time around — and how studios could rake in piles of cash by making a safe bet on the sure foundation of a recognizable name. 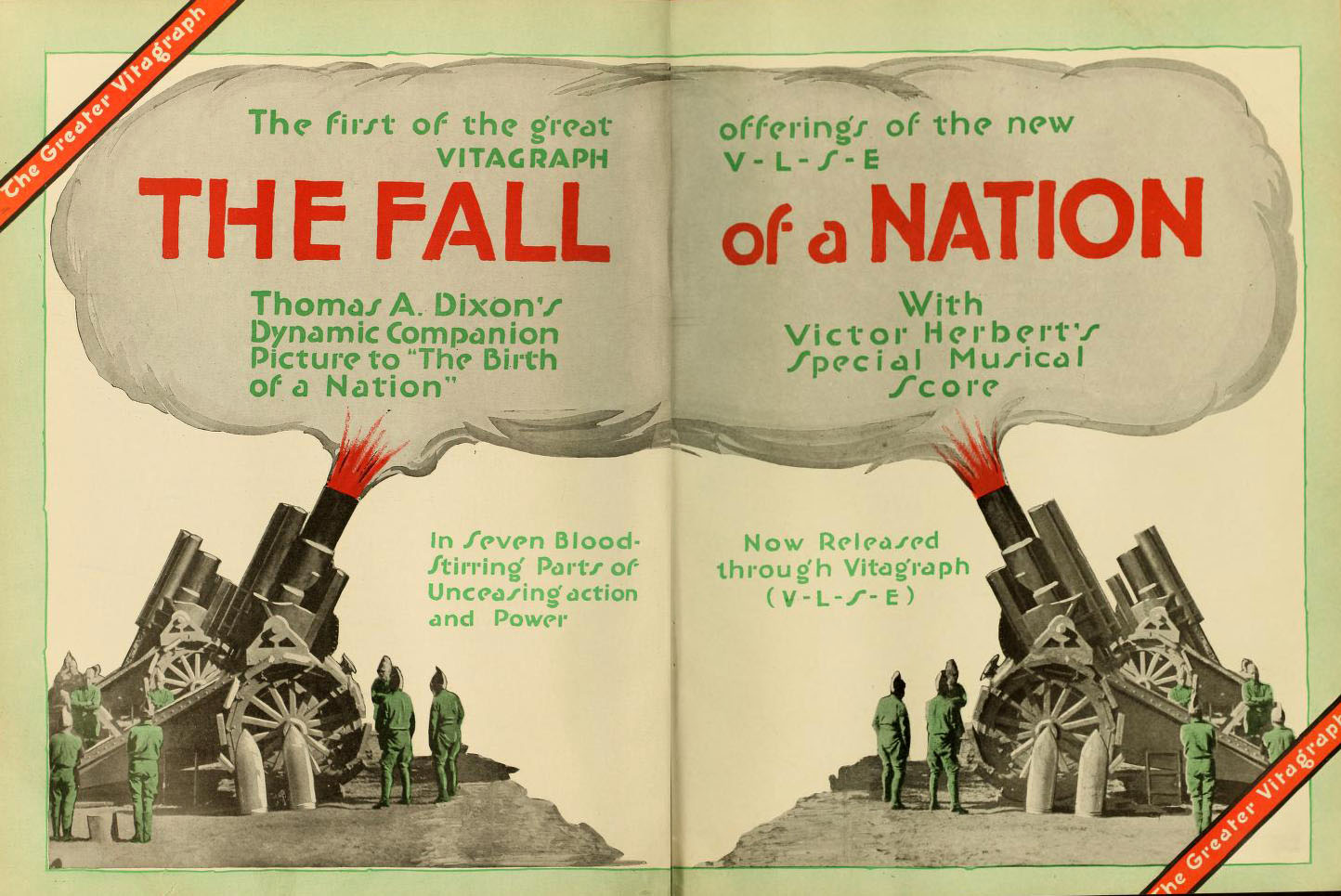 While the 70s era of film sequels kicked off the mass phenomenon we know today, the picture typically designated as the first-ever film sequel was Thomas Dixon Jr.’s The Fall of a Nation, released way back in 1916. The film is a follow-up to D. W. Griffith’s famous The Birth of a Nation, released one year prior in 1915. Dixon Jr., who wrote the book that Griffith used as the source for The Birth of a Nation, attempted to cash in on the success of Griffith’s controversial silent film by producing his own sequel based on a novel, also called The Fall of a Nation, that he wrote and published the same year.

Griffith’s Birth of a Nation chronicles the relationship of two families during the American Civil War and Reconstruction era, spanning several years and dramatizing the assassination of Abraham Lincoln. It was commercially successful but heavily controversial (especially over time), as it featured white actors in blackface playing slaves, who were depicted as unintelligent and animalistically aggressive towards women. In addition to portraying blacks as inferior, the film, based on Dixon Jr.‘s book The Clansman: An Historical Romance of the Ku Klux Klan, glorified the Ku Klux Klan as a heroic force. The Birth of a Nation became a recruiting tool for the KKK and, oddly enough, is the first film to have been screened at the White House, for president Woodrow Wilson. The United States Library of Congress preserved it in 1992, deeming it culturally, historically, or aesthetically significant. Today, The Birth of a Nation is often studied in a historical context, as well as for its technological innovations in filmmaking: Griffith was one of the first to use parallel editing and the flashback (which he termed a “switchback”). He filmed action on multiple planes within a frame and experimented with closeups in contrast with long shots. The film also featured the first night cinematrography, the first original score and the first battle sequences recreated with high numbers of extras. These technical achievements (many by cinematographer Billy Bitzer), in addition to the history, account for why the film continues to be studied and taught despite the abominable racism of its narrative.

The sequel, The Fall of a Nation, was billed as an “attack on the pacifism of William Jennings Bryan and Henry Ford and a plea for American preparedness for war.” Dixon saw how well his earlier book was adapted into film by Griffith and attempted to make his own picture in hopes of finding the same success. The Fall of a Nation’s plot synopsis reads, “America is unprepared for an attack by the ‘European Confederated Army,’ a European army headed by Germany. The army invades America and executes children and war veterans. However, America is saved by a pro-war Congressman who raises an army to defeat the invaders with the support of a suffragette.” It is categorical pro-war propaganda. Some of the battle scenes were filmed on the same locations its predecessor used, but otherwise the two films have little connection. Unfortunately for Dixon and his grand financial plans, the film was a commercial failure. Its production company, Dixon Studios, went bankrupt with just this film under its belt.

Like so many silent films, The Fall of a Nation is now considered a lost film, with no copies known to be in existence. Very few living people, if any, have seen the film.

There is also an argument to be made that Griffith was responsible for the first sequel, even before Birth of a Nation. In the early 1910s, Biograph Films didn’t allow D. W. Griffith to make films longer than one reel (around 10-12 minutes). As a result, Griffith made two films whose parts were released separately, within days of each other, and could also be considered sequels. These films had a strong impact on the future of the film industry because their popularity at the box office convinced studios that films could be longer and be successful. His Trust (1911) and His Trust Fulfilled (1911), as well as Enoch Arden, Part 1 (1911) and Enoch Arden, Part 2 (1911), are prime examples. However, these likely shouldn’t count as true sequels, as Griffith wasn’t crafting them as separate entities but as single pictures cut in half and released as two parts.

But others argue that The Fall of a Nation also doesn’t count as a true sequel, since it is set in a different time and doesn’t feature any of the same characters as its predecessor. While the film typically maintains a consensus label as “the first movie sequel,” if we require a sequel to include some continuation of the first installment’s narrative or characters, The Fall of a Nation may lose its claim to the title. Given the circumstances of its creation, The Fall of a Nation does appear to be more of a “cash-in” sequel than a true sequel in spirit. At the same time, if we consider that most sequels today are financially motivated, that itself does not deny The Fall of the Nation the sequel title.

If we do disqualify The Fall of a Nation, the title of the first “true” feature film sequel could go to The Son of the Sheik, the 1926 silent adventure/drama directed by George Fitzmaurice, starring Rudolph Valentino and Vilma Bánky. The picture is based on Edith Maude Hull’s 1925 romance novel of the same name and is a sequel to The Sheik (1921), which also stars Valentino and is based on a Hull novel. The sequel, released just after Valentino’s death from peritonitis, became the actor’s last film. If nothing else, The Son of the Sheik is the first sequel bearing the established look and feel of its predecessor. It contains the trademark elements of the sequels we know today: a recurring primary actor, a similar title and a narrative extending the original story, all of which make it more of a “real” sequel than Dixon’s follow-up to Griffith’s picture. 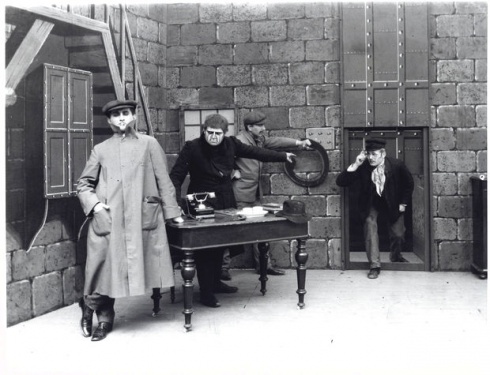 A scene from an early Sherlock Holmes short (1908)

Another notably early series — which doesn’t predate the Sherlock Holmes films but does predate the Griffith/Dixon films — followed a female detective named Kate Kirby. In An Hour Before Dawn (1913), Kirby goes undercover to solve the murder of a scientist whose son was threatened with disinheritance for his romance with a chorus girl. Chelsea 7750, released in 1913 prior to An Hour Before Dawn, also featured Detective Kirby. The Port of Doom (1913) was the third Kate Kirby film released that year. Each was a four-reel picture clocking in at less than an hour’s length.

There is also a significant possibility that other silent film sequels may have predated any of these titles. Around 75-80% of all silent films are estimated to have been lost over the years, so it’s likely that other sequel films could have existed that we don’t even know about. As it is, each person’s definition of a sequel — especially whether it requires a continued narrative and whether it must be feature-length — determines which known film classifies as the first “true” sequel.