What is the origin of the Vulcan hand greeting in “Star Trek”?

Quick Answer: The famous Vulcan hand greeting in Star Trek was created by Leonard Nimoy. It is actually the physical representation of the Hebrew letter “shin,” and comes from a Jewish prayer ceremony Nimoy remembered witnessing as a child growing up in Boston with Yiddish-speaking grandparents.

You don’t have to be a huge Star Trek (1966-1969) fan to know about the Vulcan hand salute. The open-palm with extended thumb and split fingers in a “V” shape is a hand position recognizable by millions. It is an iconic gesture that has broken free of television or film and become a part of the human experience. It is so well-known that it has its own entry in the Unicode standard (U+1F596). It has been parodied and referenced in countless other materials, and following Leonard Nimoy’s death in 2015, astronaut Terry Virts sent back to Earth a photo of his hand performing the gesture out the window of the International Space Station with Earth in the background, centered over Nimoy’s home town of Boston. The salute’s accompanying phrase, “live long and prosper,” is equally legend and thrives as part of the lexicon of human vernacular. It’s also the official symbol for Star Trek in American Sign Language.

What is interesting is how the Vulcan hand sign came to be. It wasn’t penned in a script by an original Star Trek writer. It wasn’t conceived by Gene Roddenberry, the creator of Trek and founder of many of its ambitious ideas. Instead, the Vulcan hand sign was the creation of Leonard Nimoy himself, who first performed it on the season two opener of Star Trek, “Amok Time.” Understanding the way various human dignitaries and cultures greet each other with different ritualistic methods, he felt the Vulcans, who in this episode were represented by Spock as he meets an important Vulcan figure for the first time, should be revealed to have a unique gesture of their own for sociological purposes. The director agreed to give it a try, and legend was born.

Where Nimoy came up with the salute comes from a place far more practical than the science-fiction atmospheres of Star Trek. He drew upon childhood memories of Jewish synagogue services he attended with his Yiddish-speaking grandfather. The V-shaped position is the shape of the Hebrew letter “shin,” which is the representative letter of the word “Shaddai,” a term for God, and is a gesture traditionally used by the Kohanim (Hebrew “priests”), Jews of priestly descent, during a blessing ceremony. It’s also the first letter of “Shalom,” the Jewish word for hello, goodbye, and peace. 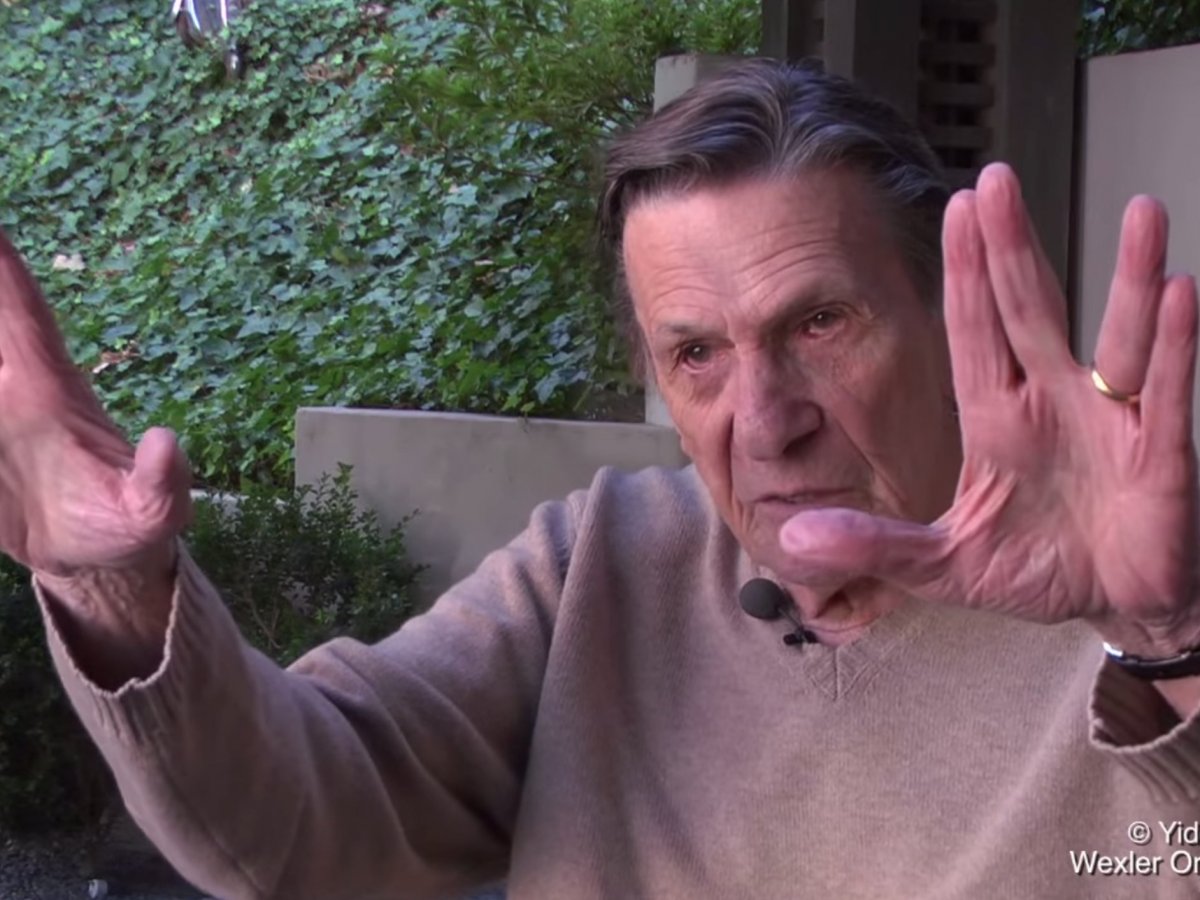 Nimoy showing how the gesture is typically performed in Jewish ceremony

As a boy, Nimoy participated in the Shekhinah, a prayer meant to bless a congregation as the female aspect of God comes in to bless those present. As Nimoy wrote on the official Star Trek blog a few years ago, “The light from this Deity could be very damaging. So we are told to protect ourselves by closing our eyes. I peeked. And when I saw the split-fingered gesture of these men… I was entranced. I learned to do it simply because it seemed so magical. It was probably 25 years later that I introduced that gesture as a Vulcan greeting in Star Trek and it has resonated with fans around the world ever since. It gives me great pleasure since it is, after all, a blessing.”

For many, the hand gesture is hard to perform. It requires a particular dexterity that some, including William Shatner, do not possess. Some cast members of the original Star Trek series are reported to have tied their fingers together in order to form the “V,” while others had to set the fingers in place with their other hand before raising it to camera.

No matter how one has to contort their fingers to form the “V,” it’s clear that Nimoy came up with something powerful back in 1967. Soon the hand gesture will celebrate a half-century of life on-screen and off, lasting as a symbol of peace and unity, founded on a Jewish symbol of those same positive ideas.