Quick Answer: Star Trek has been around for over 50 years, resulting in multiple television series which look and feel very different from today’s television. From the over-saturated colors and procedural storytelling of the Original Series through the awkward high-definition digitally-shot prequel Enterprise, things changed a lot. Each series has its unique visual charm and different methods of exploring topical issues of the time.

Star Trek is officially a five-decade old franchise. Its television series and films have been part of several generations of audiences, each bringing a unique approach to storytelling and aesthetic to the small screen.

Visually, there are great differences between the series. The Original Series (1966-1969) operated on a shoestring budget, teetering on the edge of cancelation for most of its run. It had significantly less funding than all the series which would follow and is now retrospectively characterized by its heavy use of brightly-colored everything. Color television had just started picking up steam in 1966 and Star Trek capitalized on this new invention by overdoing the color on every part of production, from costuming and set design to makeup. The series was shot on film as was standard at the time, and which added to its visual contrast to later series. Quite frankly, it now looks and feels like a cheesy science fiction show from the 1960s. 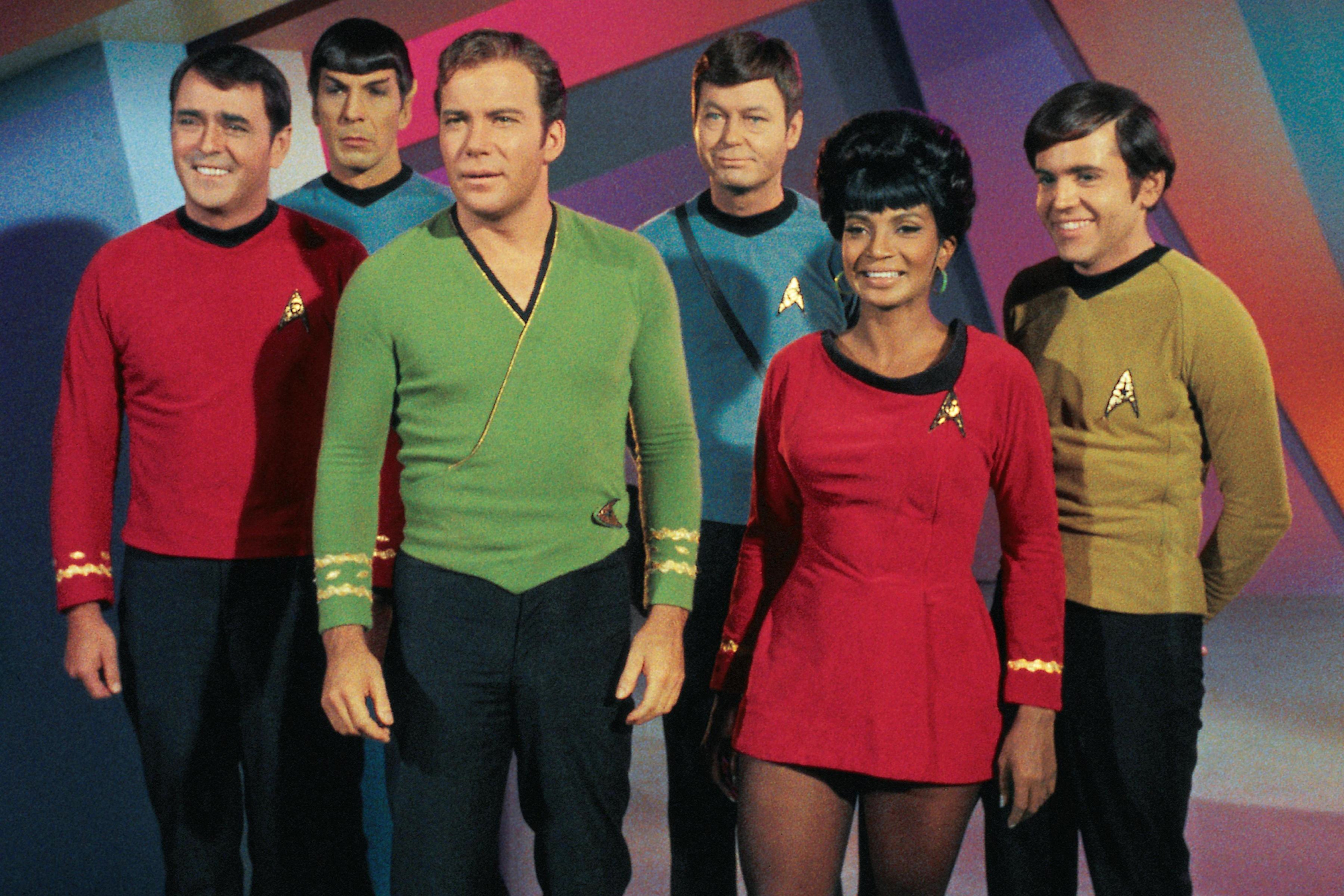 The cast of The Original Series

The series tells allegorical stories based on topical social issues of the time. Its plots are heavily charged by issues like the Vietnam War, the space race, racial injustice and civil rights, intercultural tolerance, sexuality, and economics. The adventures of this futuristic team of explorers serve as parallels to happenings in 1960s society and offer suggestions for a more unified, peaceful world.

The Next Generation (1987-1994) took to the air after several Star Trek films were made starring the original cast, informing Paramount that an interest in Star Trek continued to thrive. The series was given a bigger budget as the studio gained confidence in the franchise’s success after seeing continued profits from the Trek movies, believing people would respond well to another run on television. The series was again set aboard a ship called Enterprise, this time the latest model and four versions ahead of Kirk’s (William Shatner) original vessel. The color profile was changed to a more 1980s look, with sleekness and modernity to the set design and costuming. The series was originally shot on film and then edited and finished on videotape, changing the softness of the aesthetic. Today, the show looks appropriately dated to its era but isn’t as dramatically “cheap” looking as TOS. (Its recent re-release on Blu Ray has digitally enhanced the stock to 1080p HD quality, making for an entirely different visual experience.) 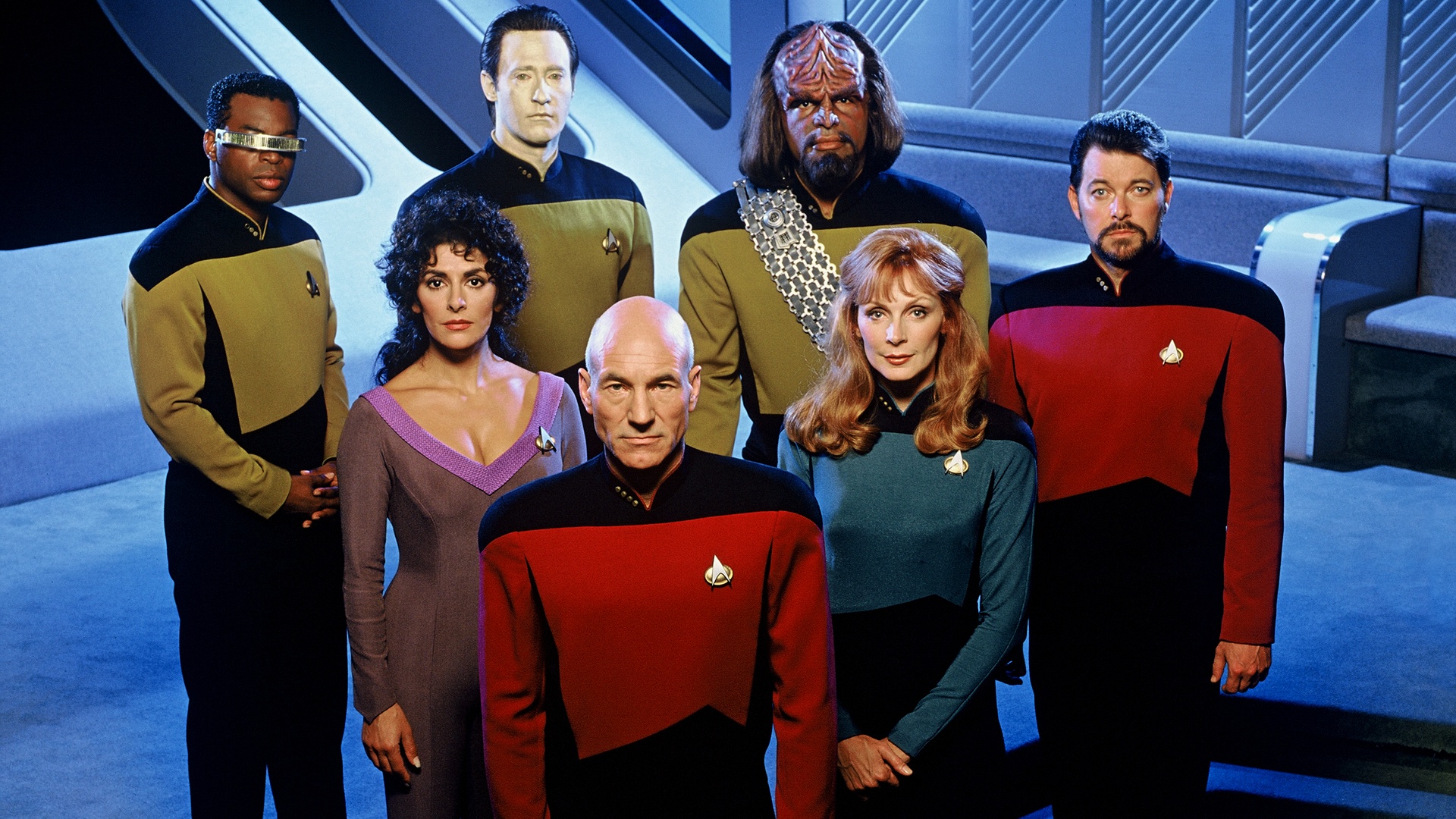 The cast of TNG

Much like its predecessor, TNG’s stories are often charged by social events of the time. The length of its run, which would go on to be over twice as many episodes as The Original Series (178 episodes vs. 79 episodes), allowed the series to greatly expand its scope and broaden the Trek universe. 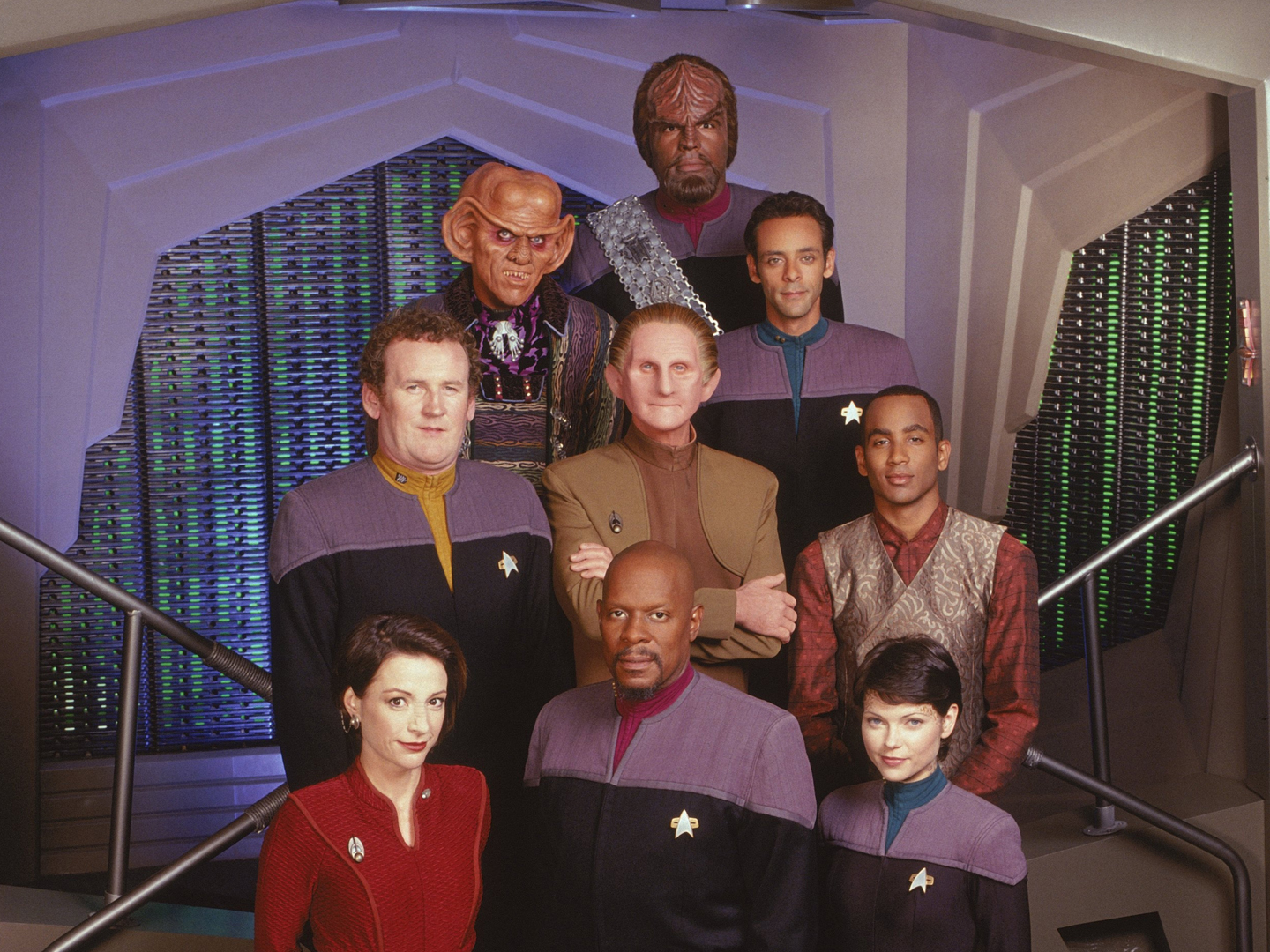 The cast of DS9

Deep Space Nine (1993-1999) took to the air while The Next Generation was still an active series, doubling up the amount of Trek on-air. As a means of distinguishing itself from TNG, DS9 takes place on a haggard space station instead of a starship, focusing on the internal happenings of the station instead of exploring the galaxy. (A starship called Defiant was introduced in DS9’s third season after TNG concluded its run, but the station remained the primary setting for the series.) Like TNG, the program was shot on film and finished on videotape, but its aesthetic felt very different because of the modified setting. Deep Space Nine is a dim, cool space station which sits near a wormhole. Instead of exploring the galaxy and gathering information as Starfleet officers had always done in prior series and films, Starfleet’s presence on DS9 is one of political and security oversight and station management following a long, raging war between the Bajorans and the Cardassians, who formerly operated the station. This makes for a tonally darker show which approaches its material differently than its predecessors, and focuses much more on serialization than previous installments with stories touching subjects like terrorism, idealism, war, and faith. Plotlines in DS9 carry across episodes and even multiple seasons. In keeping with Star Trek tradition, DS9 still takes much of its inspiration from topical events of the era. 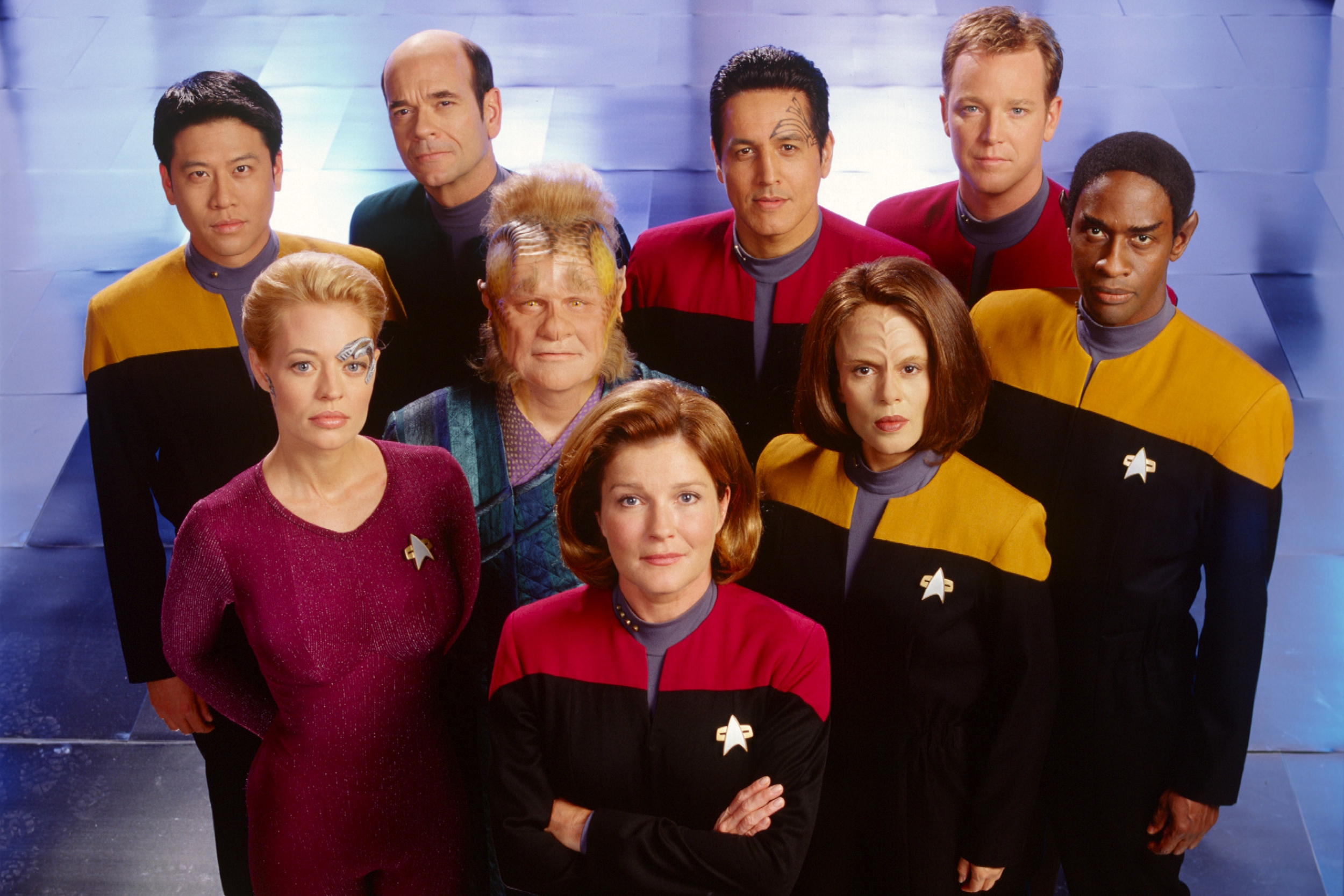 The cast of Voyager

Voyager (1995-2001) again takes its stories back to a starship and often features aliens not seen in previous installments. Like the two series before it, Voyager was shot on film and edited on videotape as digital production wasn’t quite yet the norm during its run. As such, its aesthetic isn’t vastly different from the DS9 or TNG. The series featured female captain Janeway (Kate Mulgrew) and initiated itself under a ‘lost in space’ premise wherein Janeway’s team had to align themselves with a Federation rebel group first introduced in Deep Space Nine. Praised for its female-forward storylines, Voyager’s Janeway embodied many of the characteristics viewers liked about both Kirk and Picard (Patrick Stewart) from previous shows. Unlike DS9, which wove intricate plots that successfully spanned episodes and created a unique serialized show, Voyager reverted to a problem-of-the-week procedural format to distinguish itself from what came immediately before. 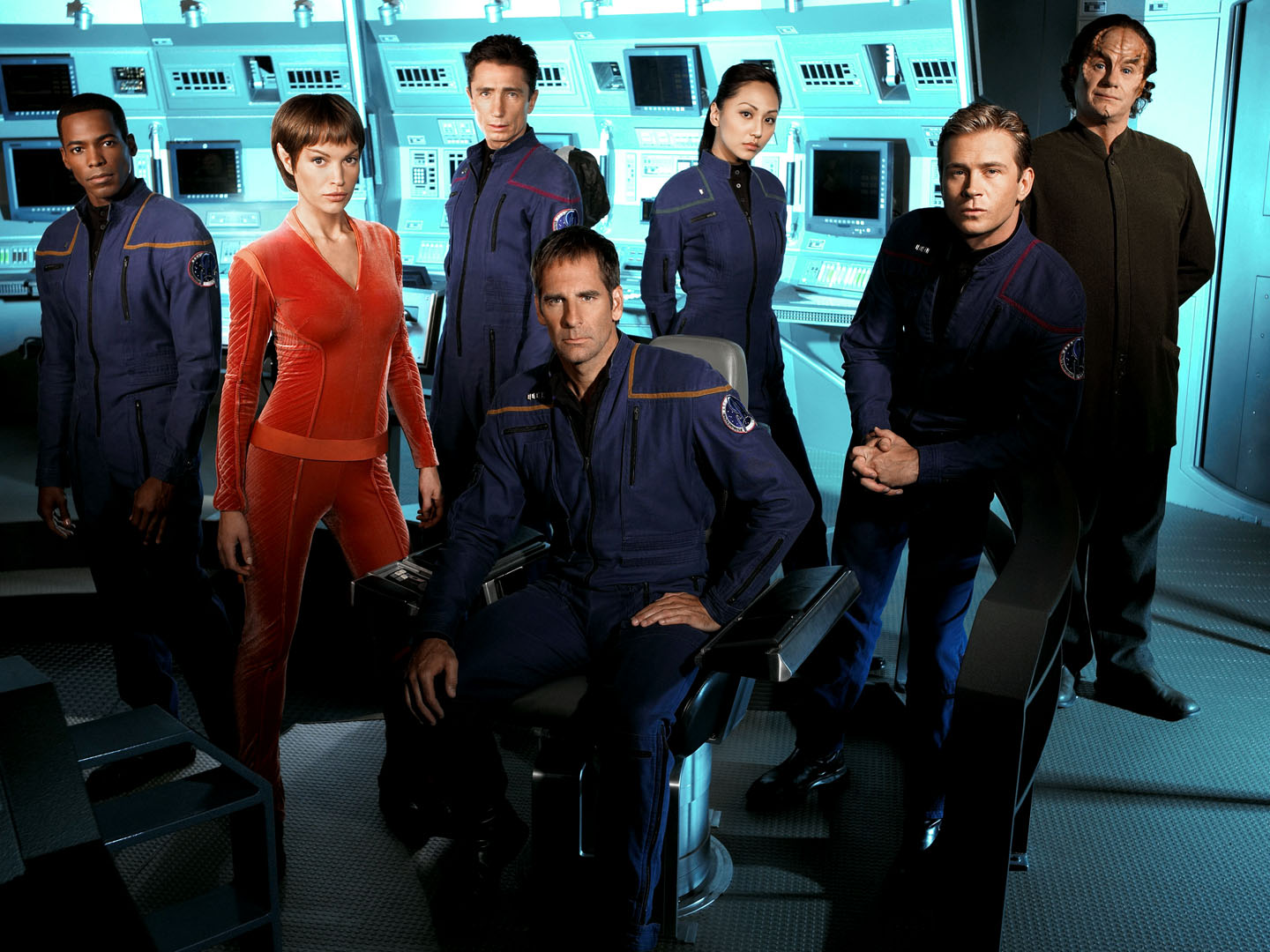 The cast of Enterprise

Enterprise (2001-2005) is a pure product of the new millennium and the franchise’s first high definition series, creating a much crisper visual look than all other entries. A big challenge for the series was that while the visual appeal is richer and cleaner thanks to a high definition picture, Enterprise’s story actually takes place 115 years prior to The Original Series. Production design had to attempt to make the series look more rudimentary than something which aired on television four decades earlier while filming it in cleaner high-definition video. This lead to some backward extrapolations of style and ship function, with a more submarine-like space vessel and simplistic costuming unlike anything on the previous shows. It’s a bit awkward. Even though the cast does things like running on treadmills and other antiquated actions when compared to other series, with stunning clarity and rich colors, it’s hard to wrap one’s mind around the idea that Captain Archer’s (Scott Bakula) ship is actually a century older than Kirk’s Enterprise from low-budget 1960s TV.

Enterprise started after various Star Trek series had been on the air for nearly 15 years straight, and public interest in Trek was waning from the saturation. The prequel status of Enterprise was, presumably, what the producers hoped would foster continued interest in Trek material, but it didn’t turn out to be the case. DS9 was grim and courageous with its exploration of interpersonal and political struggles. Voyager was artistic and heavily fictional, pointing away from the mostly-believable future of the earlier series and more toward fantasy. Then Enterprise took audiences to a pre-Picard, pre-Kirk era when warp drive was just invented and the Enterprise NX-01, the first ship bearing the Enterprise name, was commissioned. The fact it is a prequel is not really explored in depth until the series fourth season, somewhat squandering the idea. Its storytelling is inconsistent in style from season to season, rendering it an entry in Trek canon with a debated reputation. 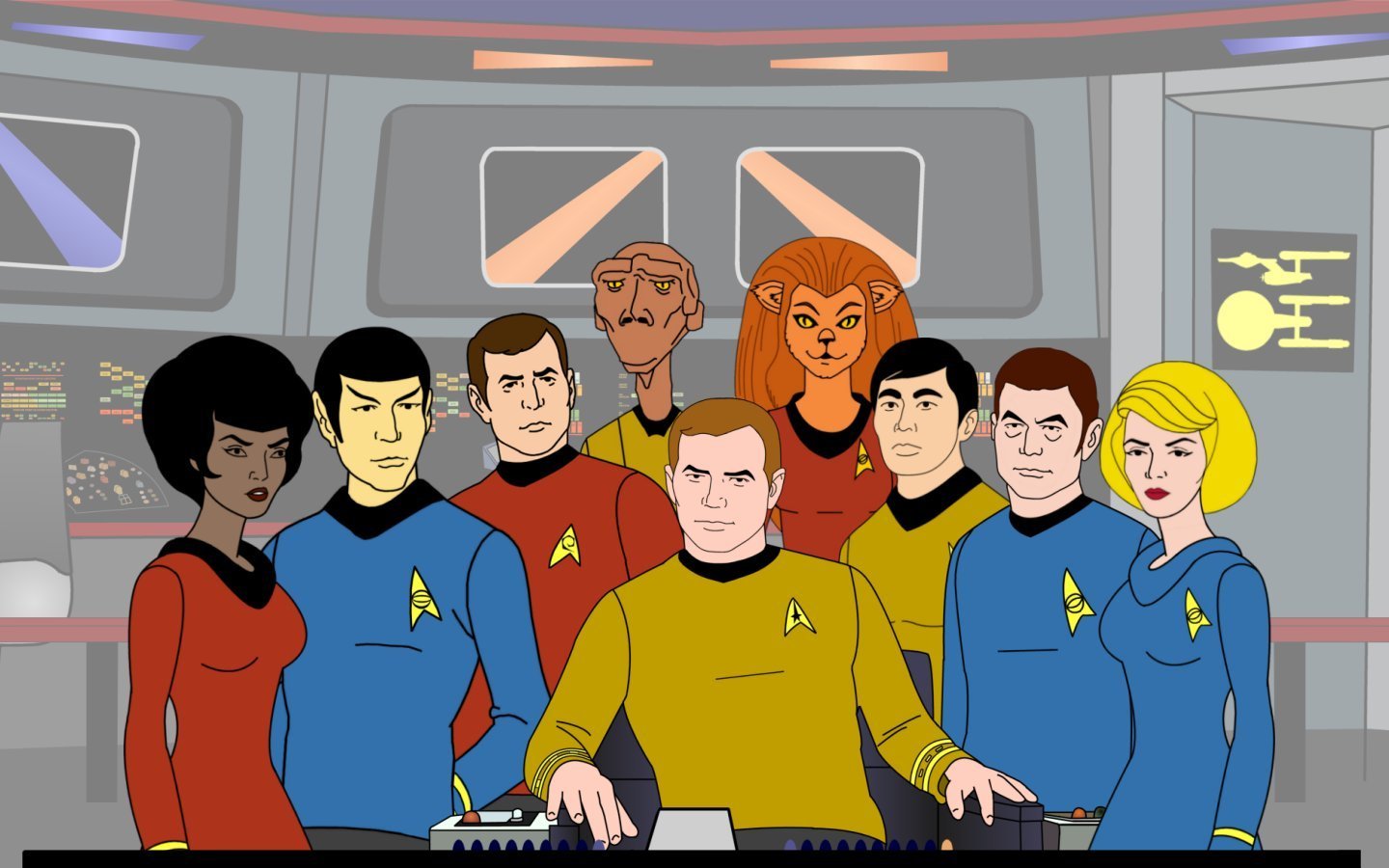 Finally, there is the most-overlooked Star Trek series, The Animated Series (1973-1975). It is voiced by The Original Series cast and written largely by veteran Star Trek writers. Since it is a cartoon, its visual distinction in Trek programming is obvious. Being animation also means its scope and material were limited only by the imagination of its writers. Its characters (particularly the aliens) were capable of doing things only animated characters could do. The Starfleet crew was able to face foes more fantastic and impossible than television budgets and the restrictions of the era could handle, allowing the stories to go beyond what live-action television could muster. And the animation was top-notch for the time, crafting a rich visual world.

Clearly, there is a current which flows through all of these series which defines each installment as definitively Star Trek. But as a five decade old franchise, things have come a long way in the franchise’s presentation and approach to storytelling. Each series offers its own strengths and weaknesses, which is why most Trek fans have specific series they prefer over others. As we prepare for a new Star Trek series, Star Trek: Discovery, it is exciting to see how they will freshen the franchise and tackle Trek material after more than a decade of Trek-free television.