The One To Watch For a Master Class in Comedic Acting: “Veep” S4E5 - “Convention”

Everyone knows that Julia Louis-Dreyfus operates on a higher comedy plane. This is never clearer than in her portrayal of Selina Meyer on HBO’s Veep (2012-). Veep has earned her four Emmy awards and four Golden Globe nominations to date, including one this year.

Veep creator Armando Iannucci famously allows for input and a degree of improvisational freedom among the ensemble cast, led by Louis-Dreyfus. The show works best when the actors are all working off of each other, responding to yet another crises at the White House (usually caused by some colossal screw up by someone on their own team) or unashamedly capitalizing on others’ misfortunes. In the fourth season, now that Veep‘s Veep has become the POTUS, some of the original underdog charm has been lost. Still, Episode 5, “Convention,” has all of the original snap, crackle, and pop that makes the show great.

“Convention” gets almost the whole ensemble together in one room — the President’s suite at the Democratic National Convention. (The exception is that Dan, Jonah, and Richard spend the episode in the sterile white halls of a giant lobbying firm.) Meyer and her team are struggling in the face of a devastating data breach scandal and find themselves scrambling to fill the VP slot on her ticket: “It is such a great job,” Selina says, totally oblivious, as is her way, to the irony; she hated being VP.

In this episode, viewers see all the different sides of Louis-Dreyfus’s character and the actor’s ability to switch faces on a dime. First we glimpse her private, family-oriented face — Selena as mother. The episode opens with Selina and her daughter Catherine (Sarah Sutherland) rehearsing for Catherine’s speech at the Democratic National Convention. One vote that Selina Meyer will never win is “Mother of the Year,” and that comes through clearly in this scene. “I love you, Mom,” Catherine says in her speech. Grimacing, Selina responds, “You’ve got to say it like you mean it, though, darling.” 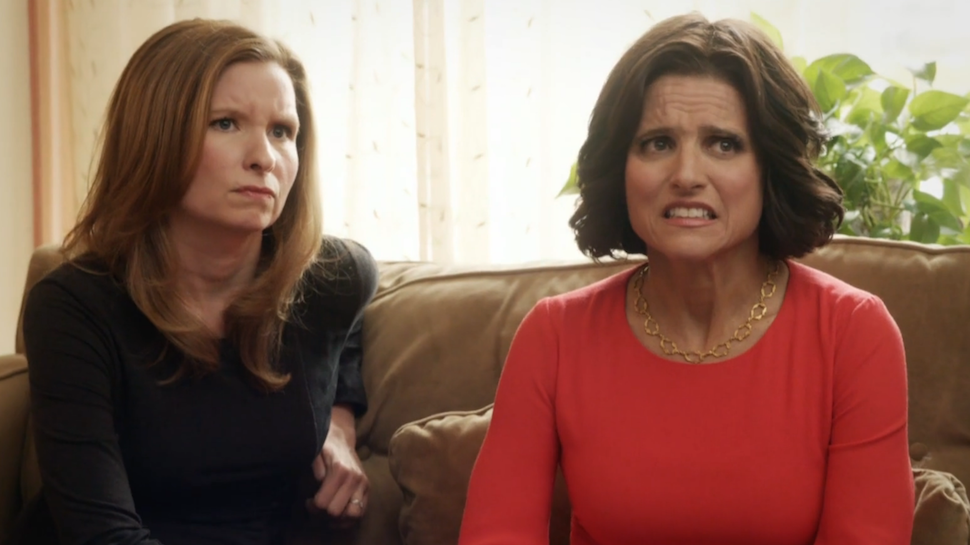 Next we witness Selina as President, managing her never-ending schedule and dealing with crises big and small, ever inappropriately. When her secretary, Sue (Sufe Bradshaw), tells Selina about a man in Louisiana who did not die from lethal injection, Selina responds with a joke about death row and a withering expression.

Finally there is Selina the candidate, mired in election and convention politics. In trademark Veep fashion, the Meyer team leaves no group or constituency safe from its vicious swipes. The staff is down and out when a rival announces that he has selected a Latina as his running mate. “She’s a woman!” Selina howls. Unfailingly charming when trying to court VP candidates, Selina is biting and cowardly in dealing with her staff. When one particularly close staffer dares to speak truth to power, Selina responds with a cold silence. Then, immediately after that person is fired, she takes the blow-up to heart. 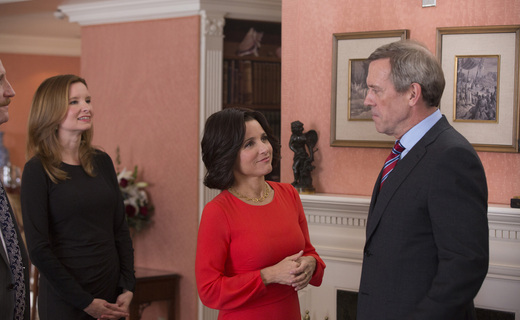 In the hands of a less-talented cast or with a different leader at the helm, all of the anti-PC material could feel mean or shocking for shocking’s sake. But Iannucci neither reduces his characters to cartoons nor resorts to easy, clichéd tricks to make them relatable, and the lightning-fast wit keeps us on our toes or trying to catch up. Louis-Dreyfus sets the tone for the ensemble with the knowing nuance of a comedy veteran. As Selina, she rises to the level of foul-mouthed cruelty called for by the writing, but she keeps the satire at such a high level of ridiculousness that Selina and her team become inexplicably likable. At one point in the episode, she even channels Elaine Benes, her character from Seinfeld (1989), when she gives Tom James (Hugh Laurie) a punch on the arm that recalls Elaine’s famous, “Shut Up!”

In these little things—small character moments in a show overflowing with broad, brash comedy—Louis-Dreyfus gives viewers a glimpse of the humanity behind the humor.