Queering Classic Hollywood: Lesbianism and the Western - The Case of “Johnny Guitar”

It’s not difficult to see the gay overtones of classic Hollywood Westerns, with their characteristic tropes of tough men together in the wilderness and male-male rivalries so intense they seem like love…or at least lust. The genre can be an absolute treasure-trove of repressed homosexual voyeurism.

Beyond the images and character interactions, even the narratives of classic Westerns lend themselves to gay readings. Women often represent a domesticity that threatens a cowboy’s freedoms, from risk-taking in wide-open spaces to the companionship of men.

With these generic elements, it’s not surprising that Westerns are not much known for their lesbian overtones. Women are generally limited to the roles of mild-mannered townswoman or saloon gal, i.e. virgin or whore. Such emphasis on opposition could echo a white-hat vs. black-hat bromance, but rarely are female characters developed with adequate fire in their bellies—or enough screen time to develop a relationship.

In Stagecoach (1939), for example, proper lady-wife Lucy (Louise Platt) shows a snobbish dislike for friendly, earnest hooker Dallas (Claire Trevor) at the beginning of the film. Plagued by terrible self-esteem, Dallas can never get up the gumption to put Lucy in her place, and the two eventually bond (temporarily) when Dallas helps Lucy with her newborn. Rather than a typical masculine rivalry over power, land, or a love object, Lucy and Dallas’s relationship rests entirely on patriarchal gender norms. 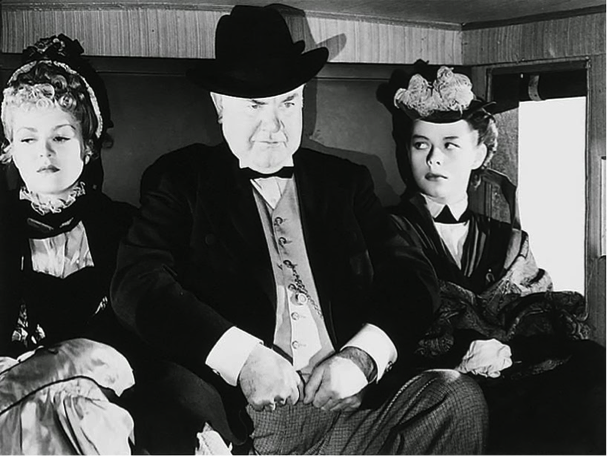 Dallas (Clair Trevor) and Lucy (Louise Pratt) rarely make eye contact, much less converse. And having a man between them (Berton Churchill as Ellsworth Henry Gatewood) ensures physical as well as emotional distance.

Race is also be used to divide women in Westerns, especially with the white woman as the virgin or humble wife and the woman of color (usually Native American or Mexican) as the whore or traitor. High Noon (1952) offers a compelling instance of this opposition in the tension between the wife of Marshal Kane and his former lover: blonde, white-clad Quaker Amy Fowler (Grace Kelly) and dark, black-clad Mexican widow Helen Ramirez (Katy Jurado). While there may be lesbian pleasure in envisioning the two women running off together and leaving the men behind, this is not the film’s trajectory. Like Stagecoach, we do see a scene of understanding between the two, as Helen explains to Amy that the Marshal is not her man, but that if he was, she would stay and fight for him rather than flee the violence. After this scene, however, Helen takes the train out of town and exits the film. 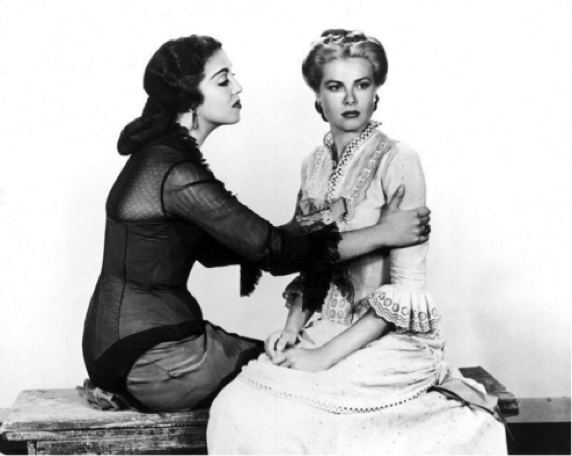 Every rule has its exception, of course, and there is one film that pushes gendered boundaries for women in Westerns far enough to encourage a lesbian reading. That film is Johnny Guitar (1954), which Roger Ebert describes as “one of the most blatant psychosexual melodramas ever to disguise itself in that most commodious of genres, the Western.” The story is ostensibly about cattle ranchers and business folk, those who are happy with life as it is and those who want change. The ranchers don’t want the town to become a city, while those in town welcome the arrival of the train and the business it will bring. Because the film is low-budget, we see only a handful of characters in each camp, and the conflict ultimately comes to be represented by the fierce wills of two powerful women: Vienna (Joan Crawford), who owns the gambling establishment just outside of town, and Emma (Mercedes McCambridge), a cattle baron(ness) who sees in Vienna all that is wrong with the world beyond ranching. 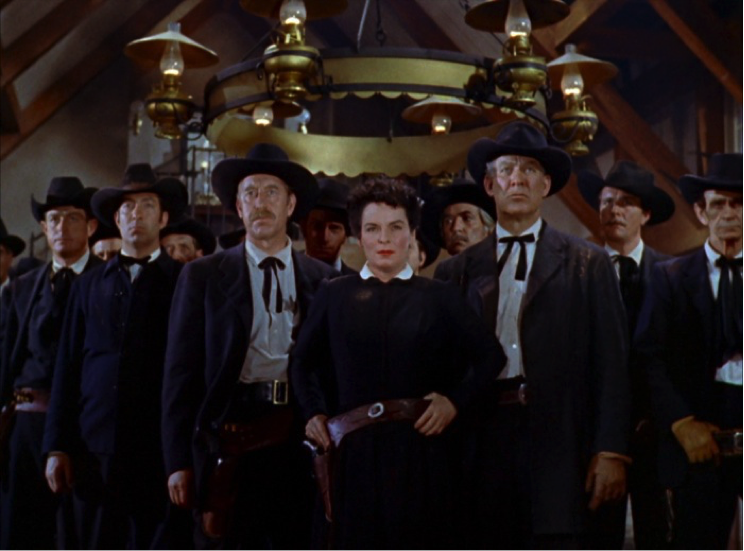 Their first encounter in the film has Emma standing stiffly with the Marshal and her men behind her and Vienna looking down on them as she descends her staircase. Emma approaches, and the scene ends with Emma declaring, “I’m going to kill you.” Vienna icily replies with classic Crawford disdain, “I know. If I don’t kill you first.” Such an exchange is male terrain in almost every other Western, showing a force of feeling labeled as hate but potentially signifying far more. You can’t hate someone so much if you don’t love them. And the lesbian overtones commence from there. 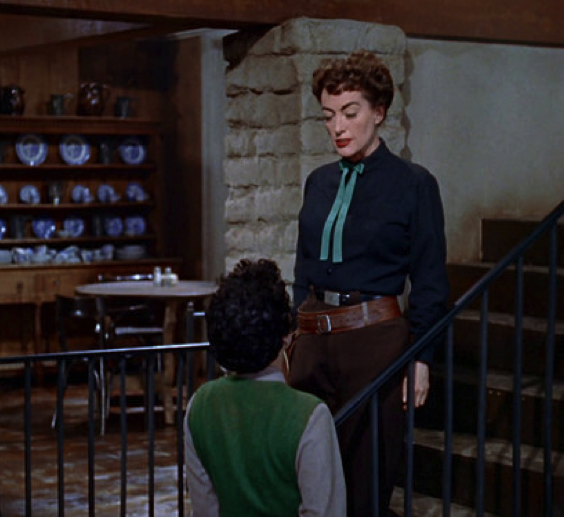 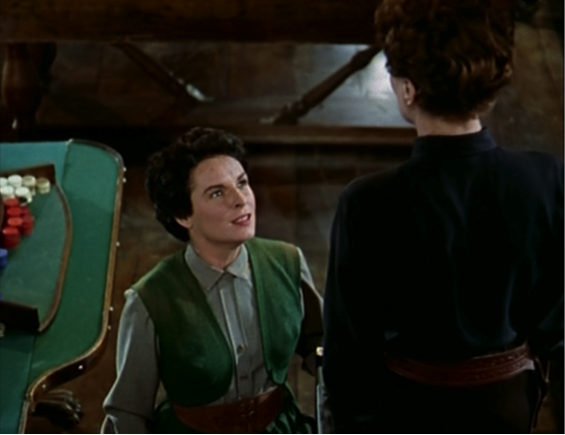 Of course, the tension isn’t just about money and power. Gender stereotypes do ensure that the rivalry between Vienna and Emma won’t stay so simple, so masculine. Instead, they battle superficially over Scott Brady’s “The Dancin’ Kid” (as gay a cowboy nickname as ever there was), who has had an affair with Vienna and still desires her, but never wants Emma. As with many a love triangle, queerness appears when you remove the one fought over. Though Emma tries to get “The Kid” (and his gang) arrested for the murder of her brother, her true fury is reserved for Vienna, and only grows when she learns that Vienna has brought “Johnny Guitar” (Sterling Hayden) to town. Johnny (whose real surname name is Logan) was the best gunman in the West, now retired, gunless, and playing guitar for his supper. He is also Vienna’s former lover, who left five years earlier. Vienna wants him to protect her establishment, but is that just an excuse to have him in her arms again? 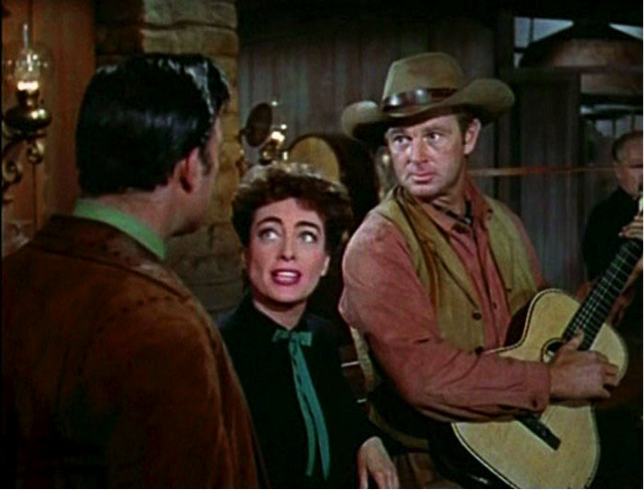 This insult is all Emma can take: not only does The Kid not want her, but Vienna doesn’t want him. Her vitriol rises even further. Although she wants The Kid and his gang caught and killed, she wants Vienna (who has committed no crime) just as dead.

Perhaps the best scene in the film for those who read Vienna as lesbian (or bisexual but saving her most passionate emotions for women…or Emma, anyway) is when Johnny demands that Vienna admit her love for him, even if it’s a lie:

Johnny:
How many men have you forgotten?

Vienna:
As many women as you’ve remembered.

Johnny:
Tell me something nice.

Vienna:
Sure. What do you want to hear?

Johnny:
Lie to me. Tell me all these years you’ve waited.

Vienna:
All these years I’ve waited.

Johnny:
Tell me you’d have died if I hadn’t come back.

Vienna:
I would have died if you hadn’t come back.

Johnny:
Tell me you still love me like I love you.

Vienna:
I still love you like you love me.

Johnny:
Thanks. Thanks a lot.

When we combine such “love” talk with the intensity of feeling visible whenever Vienna and Emma meet, a queer reading is available for the taking.

And they do meet again. Emma convinces the cowed men who follow her, including the Marshal, that an execution is due. They catch the youngest member of the gang, Turkey (Ben Cooper)—who also happens to be in love with Vienna—and decide to string him up. The gang, under The Kid’s leadership, has robbed a bank, after all. Emma uses the fact that Vienna (with Johnny) was at the bank at the time to claim she organized the robbery. This makes no sense, Vienna declares, because she has plenty of money. But Emma has roused the men and Vienna—in an absurdly feminine white dress—is bound and put on a horse. Turkey is hanged without much hesitation. No one, however, is willing to lynch Vienna. Emma offers money, but no one will take it. The Marshal lets her know she’ll have to do it herself. Emma hesitates only a moment before striking the horse to finish the deed. Johnny, who has been hiding out of sight, shoots the rope in two and rescues Vienna.

The women meet once more before the film ends. This time it is at The Kid’s hideout, to which Johnny and Vienna have fled after Emma burns down Vienna’s establishment. Rarely does a Western show two women in a shoot-out, but Johnny Guitar does. On the wrap-around porch, Emma shoots first and wings Vienna, whose shot goes high. When both Johnny and The Kid rush to Vienna’s aid, Emma shoots The Kid, right between the eyes. Emma then rounds the corner, raising her gun to finish Vienna off, but Vienna shoots Emma. Johnny announces that it is self-defense, and heteronormativity can reign once more. The film ends with Vienna in Johnny’s loving embrace.

The argument for gay readings of Westerns that rests on the way men’s deepest emotions are reserved for other men works perfectly for a lesbian reading of Johnny Guitar. Vienna, desired by both men and women, is desired most by Emma, even if that desire is for her death. There is jealousy and competition, but there is also a single-minded determination by Emma that is most easily read as obsession.

Moreover, while both women are unusually tough for a classic Western, gender typing is also mobilized via costume to welcome a lesbian reading. Emma is only seen in the long dresses of the era. Her garments have no frills, nor does the style of her hair. There is nothing sexualized about Emma, signifying a lesbianism akin to the spinster/maiden aunt type. Vienna, by contrast, wears dark shirts, pants, and boots more often than dresses, and is compared to a man directly by her cook (John Carradine): “Never seen a woman who was more of a man,” he states. “She thinks like one, acts like one, and sometimes makes me feel like I’m not.” It literally takes dressing her in a frilly white gown (albeit with black decorations) to render her feminine enough to be rescued by Johnny. More often, her toughness of appearance and voice makes her seem stone butch and utterly inaccessible. And this gender play makes credible the idea that both men and women desire her, mostly from a distance. 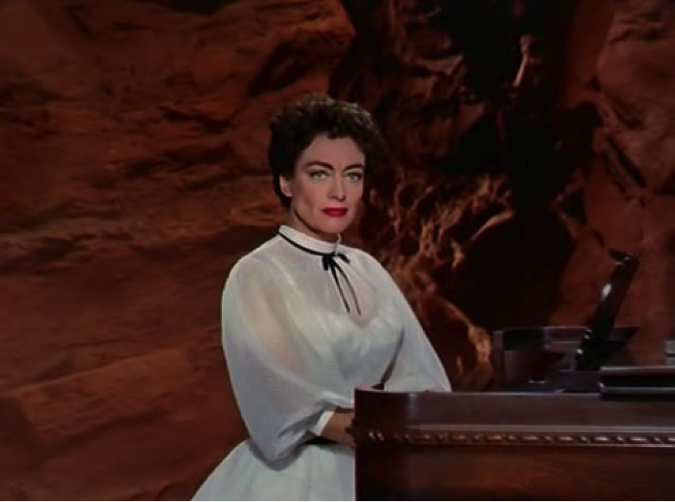 Vienna, displaying old-school femininity as she inexplicably plays the piano in a voluminous white dress

Despite the incongruity of its title and its heterosexual romantic ending, it’s difficult to be persuaded that the film is about Johnny and Vienna. The two (and only two) women of Johnny Guitar dominate this “psychosexual melodrama” and illustrate that even in a hypermasculine genre, lesbian readings are not only possible but occasionally inevitable.