Is there a Tarantino universe? How are all the films of Quentin Tarantino connected?

Quick Answer: Nearly all of the works Quentin Tarantino has written or directed over the last 25 years are connected through two universes—the “real” world universe, and the “cinematic” universe within his real universe. Many of his films feature characters related to others, indirect associations, or branding that carries over from picture to picture.

Love him or hate him, Quentin Tarantino is one of “those” directors. He has a style about his films and a culture to his fandom that has solidified him as a living legend of cinema. From low-budget capers about bank robberies gone wrong to rewriting the history of World War II, his films are all rich with Tarantino flavor and seem strikingly different from one another… except, they aren’t.

Shared universes are a big deal these days. People love to speculate on how one cinematic world overlaps another or how two seemingly separate plots may weave together, but it seems Tarantino has been sharing universes long before it was cool. The director confirmed that his films are all linked with a connective string running all the way from Reservoir Dogs (1992) to The Hateful Eight (2016). Not only that, but Tarantino’s films do more than inhabit a shared universe—they inhabit two.

“There is actually two separate universes,” he explained to The Project. “There is the realer than real universe, alright, and all the characters inhabit that one. But then there’s this movie universe. So From Dusk Till Dawn, Kill Bill, they all take place in this special movie universe. So when all the characters of Reservoir Dogs or Pulp Fiction, when they go to the movies, Kill Bill is what they go to see. From Dusk Till Dawn is what they see.” 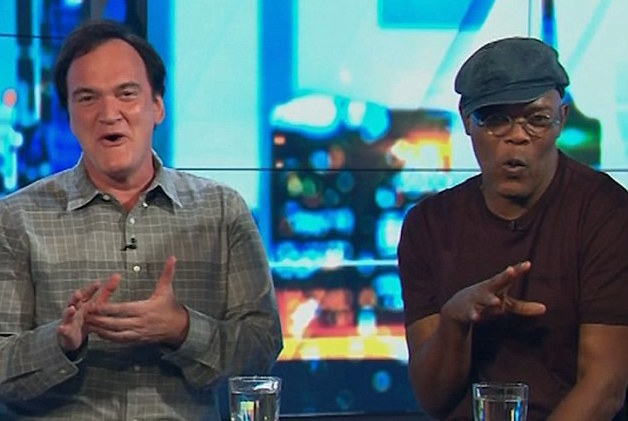 Quentin Tarantino (and Samuel L Jackson) on The Project

So basically, films like Pulp Fiction (1994), Inglourious Basterds (2009), and Reservoir Dogs exist in the “real” world, while films like Kill Bill: Vol 1 (2003), From Dusk Till Dawn (1996) and Death Proof (2007) exist in the “special movie universe.” Vampires and Five Point Palm Exploding Heart Techniques are a little too fantastic for the real world, it seems.

That means that in Pulp Fiction, when Mia Wallace (Uma Thurman) is telling Vincent Vega (John Travolta) about the Fox Force Five pilot she filmed we’re to piece together that Fox Force Five didn’t take off as a show but got made into a movie instead. How? Mia Wallace explains the fictional film’s cast by saying: “There was a blonde one, she was the leader. The Japanese fox was a kung fu master. The black girl was a demolition expert. The French fox’ specialty was sex. The character I played was the deadliest woman in the world with a knife.” Those are spot-on descriptions of Elle Driver (Daryl Hannah), O-Ren Ishii (Lucy Liu), Vernita Green (Vivica A. Fox), Sofie Fatale (Julie Dreyfus) and The Bride (Uma Thurman), respectively, in Kill Bill: Vol 1. 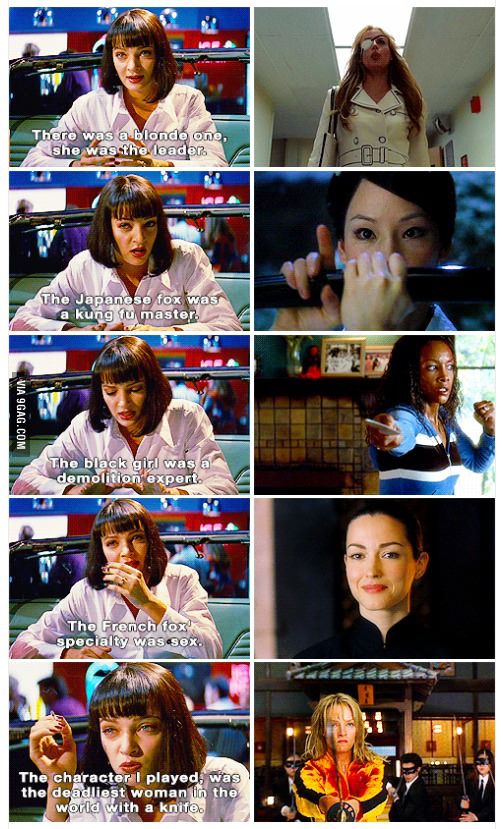 Pulp Fiction then connects to Reservoir Dogs though John Travolta’s character, Vincent Vega. The crazy, ear-cutting Mr. Blonde, aka Victor Vega (Michael Madsen) from the earlier film is his older brother. It seems crime really does run in families. 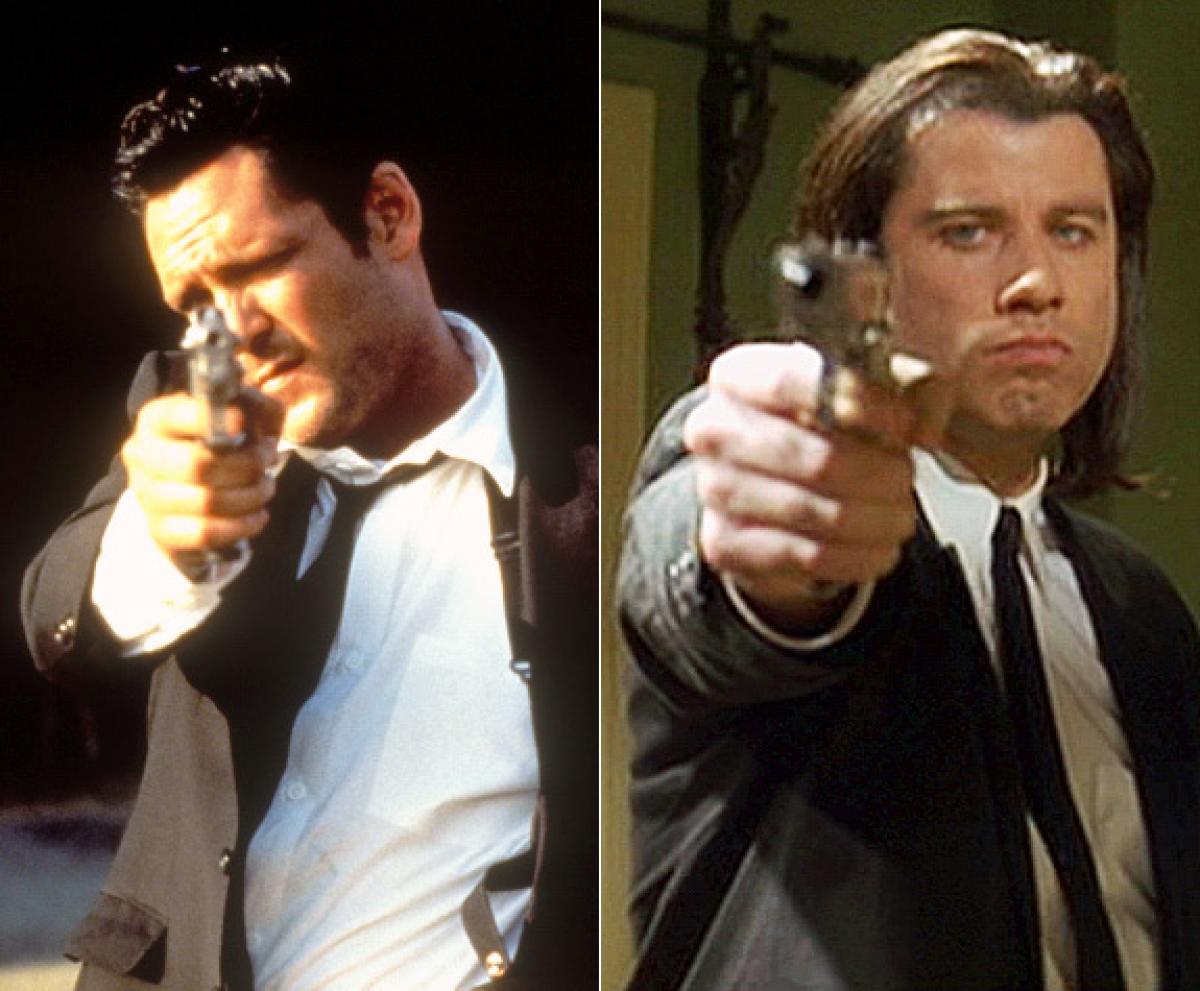 Michael Madsen and John Travolta as the Vega brothers

Speaking of Victor Vega—he lets everyone know that he isn’t a big fan of his parole officer, Seymour Scagnetti. This parole officer is never actually seen, but diligent moviegoers may recognize the name Scagnetti, as Seymour’s brother Jack Scagnetti (Tom Sizemore) is the detective made famous for tracking down and catching Mickey and Mallory Knox (Woody Harrelson and Juliette Lewis) in Tarantino-written Natural Born Killers (1994). 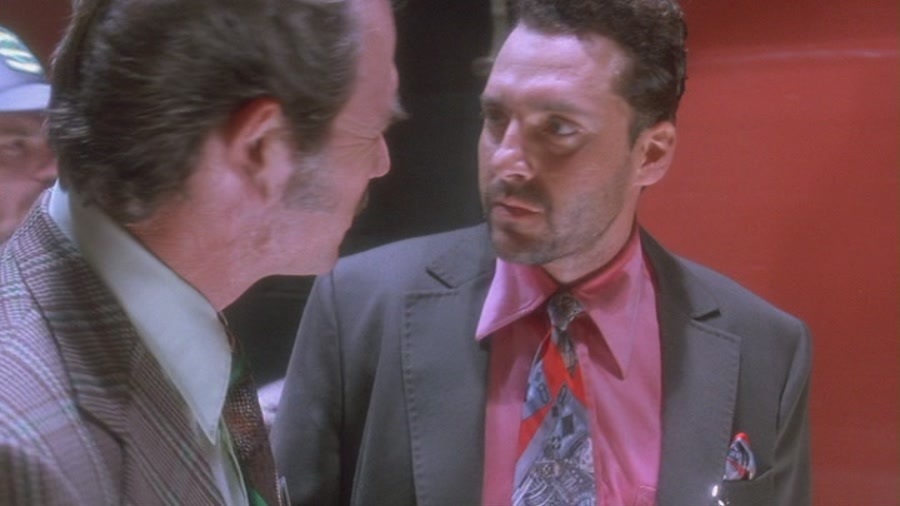 Few people know the full identity of Mr. White (Harvey Keitel) in Reservoir Dogs. The film never reveals this information, instead offering just his first name as “Larry.” But, deleted scenes and the original screenplay reveal Mr. White’s full name to be Lawrence Dimmick. That last name connects to the character played by Tarantino himself in Pulp Fiction, Jimmie Dimmick, suggesting the two men are somehow related. As Tarantino also starred in Reservoir Dogs as Mr. Brown, this makes the Pulp Fiction scene between Jimmie and The Wolf, also played by Keitel, pretty meta-awesome. 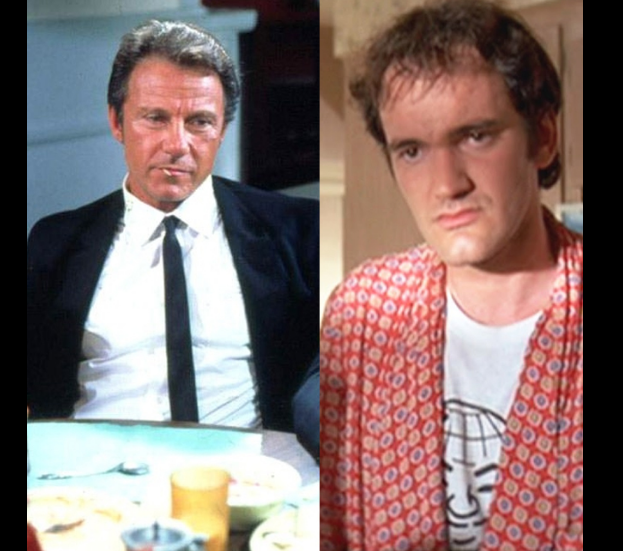 On the subject of names, the friendly and honorable watch-wielding army buddy of young Butch Coolidge’s father, Captain Koons (Christopher Walken), shares a name with someone noted in a newspaper article in Django Unchained. This connection is a complete stretch and one that 99.9% of people wouldn’t notice, but shows how carefully Tarantino likes to intertwine minor elements of his universe. 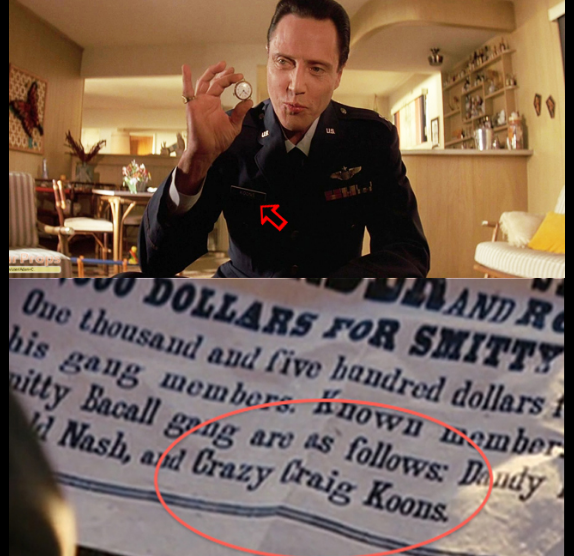 In Reservoir Dogs, we also find out Mr. White is the former mentor of a girl named Alabama (Patricia Arquette). She went on to become the lover of an Elvis super-fan named Clarence (Christian Slater) in another Tarantino-scripted film, True Romance (1993). That path doesn’t end there—Clarence and Alabama steal a bag of cocaine which they sell to a producer named Lee Donowitz (Saul Rubinek), who, of course, is the son of Sgt. Donny Donowitz (Eli Roth), the monstrous Nazi-killer in Inglourious Basterds nicknamed “The Bear Jew.”

Eli Roth as The Bear Jew

Jumping back to Kill Bill (hey, we’re talking Tarantino here, jumping around is par for the course), there is a scene in which The Bride is buried alive in an grave. The headstone reveals the grave to be the resting place of Paula Schultz, the husband of dentist/bounty hunter Dr. King Schultz (Christoph Waltz) from Django Unchained (2012).

Skipping around again, Earl McGraw (Michael Parks) is a Texas Ranger who appears in From Dusk Till Dawn, Kill Bill, and Grindhouse. Earl also has a daughter, Dakota (Marley Shelton), introduced in Planet Terror (2007). 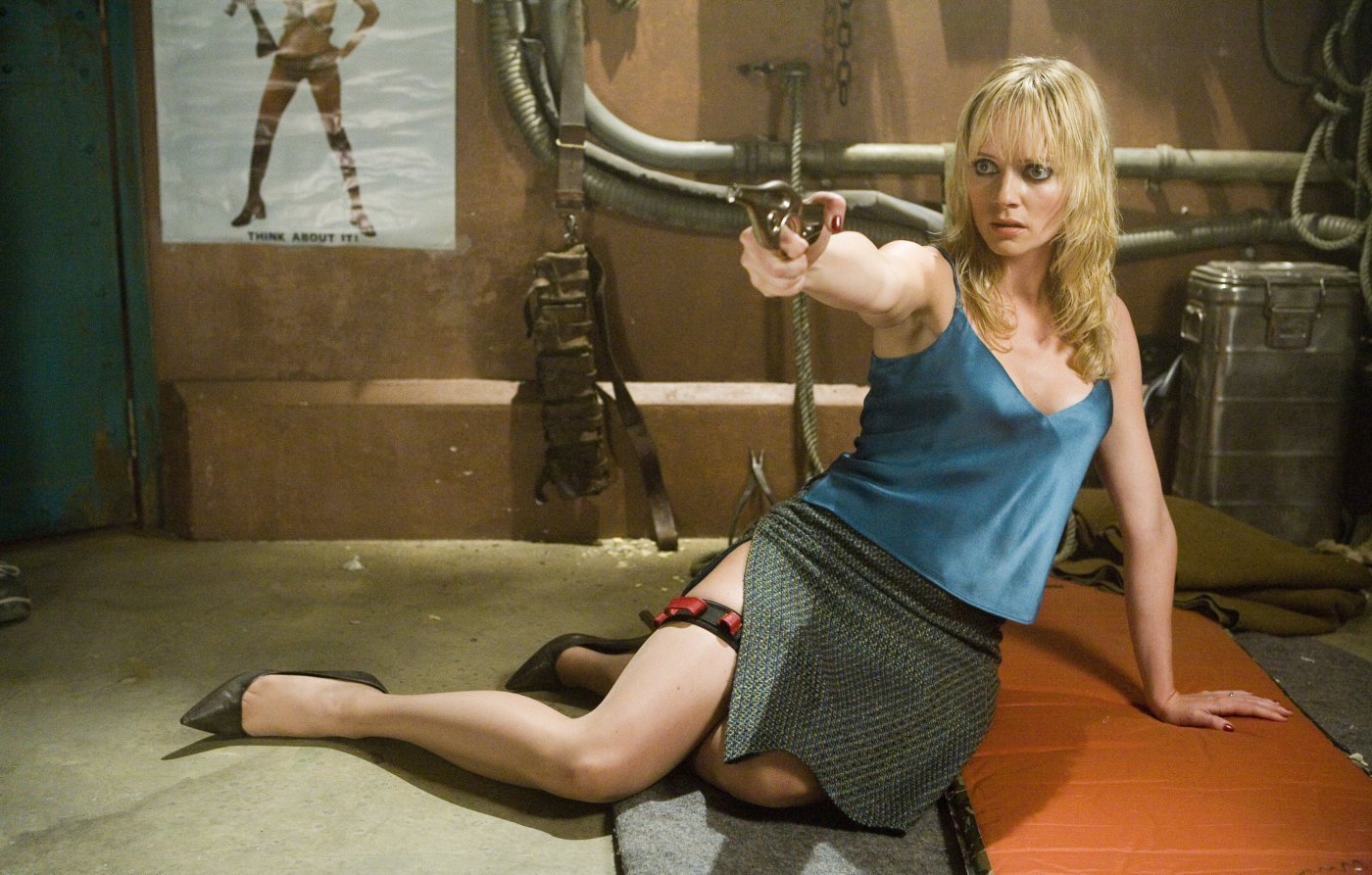 Even Tarantino’s latest opus, The Hateful Eight, plays into the universe. Pete Hicox (Tim Roth) is related to Lt. Archie Hicox (Michael Fassbender) from Inglorious Basterds. Plus, The Hateful Eight was originally conceived as a follow-up to Django Unchained, so it is conceivable that the two exist in the same universe despite not sharing any direct links. 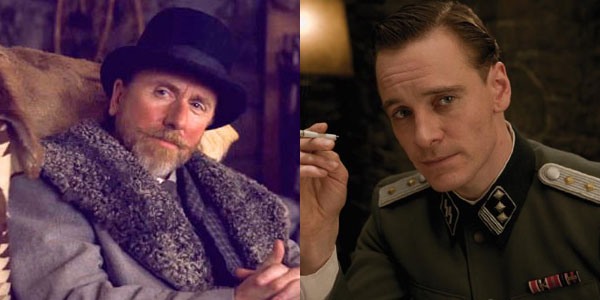 Let’s not forget nurses named Bonnie. In Reservoir Dogs, Chris Penn’s character mentions a nurse named Bonnie who may be able to help with their wounded heist member. In Pulp Fiction, Jimmie has a wife named Bonnie, who works as a nurse, whom he doesn’t want coming home to find a bunch of gangsters and a dead body in his house. In True Romance, one of Alabama’s colleagues is a woman named Bonnie. The recurrence of this name and the consistency of her occupation suggests all these Bonnies are the same woman.

If character associations weren’t enough, Tarantino has been dropping hints through dialogue and props that indicate all his films exist in the same universe. Big Kahuna Burger, for example, is the burger chain immortalized through Jules’ (Samuel L Jackson) passionate exposition in Pulp Fiction as he samples the doomed Brett’s (Frank Whaley) tasty breakfast burger. Big Kahuna is mentioned in Pulp Fiction, From Dusk Till Dawn, Death Proof, Reservoir Dogs, and Four Rooms (1995). And let’s not forget about Tarantino’s favorite brand of fictional cigarettes, Red Apple, which makes equally frequent repeat appearances throughout his pictures. 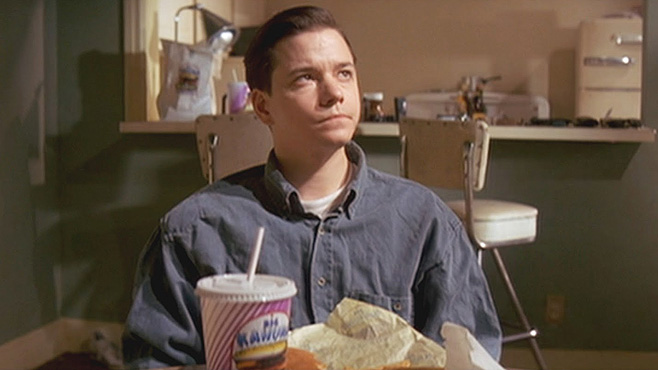 A shot from Pulp Fiction showing the Big Kahuna

The one exception to all this is crime thriller Jackie Brown (1997), likely because it is an adaptation of Rum Punch, an Elmore Leonard novel, and thus not a fully original Tarantino screenplay.

As one would expect, most of the Tarantino universe connections lead back to Reservoir Dogs and Pulp Fiction, the director’s first two pictures. But the subtle intricacy of the connections throughout all his pictures is interesting in that they are entirely unimportant—Knowing how one element connects to another does nothing to the films on narrative or compositional levels, but exist as fun Easter eggs fans can enjoy and detect. It also reflects the passion Tarantino has for his craft and his concern for details.