Is Rumplestiltskin the true villain of “Once Upon a Time”?

Quick Answer: In Once Upon a Time, Rumplestiltskin is taken hold by The Darkness, an evil magical entity. He is turned into The Dark One, the most powerful practitioner of dark magic. Rumplestiltskin becomes consumed by his addiction to power. Because of the Darkness’ firm hold on Rumplestiltskin, he is the show’s ultimate villain. Or is he? Rumplestiltskin’s relationship to good and evil isn’t black and white, complicating his status as an outright villain. Though Rumplestiltskin can be conniving and selfish, he also exhibits some underlying benevolence. As such, Rumplestiltskin proves that everyone in Storybrooke has the capacity for good and evil.

Once Upon a Time (2011 - ) is a fairy tale drama set in the fictional town of Storybrooke, Maine. The show boasts a simple yet fantastical premise: what would happen if our favorite fairy tale legends merged with modern life? The residents of Storybrooke answer that very question. Each is the alter ego of familiar fairy tale characters; Mary Margaret Blanchard’s true persona is Snow White; David Nolan is Prince Charming; Mayor Regina Mills is The Evil Queen; Killian Jones is Captain Hook; and the pawn shop owner Mr. Gold is Rumplestiltskin. The characters are transported from the Enchanted Forest to the “real world” by a powerful curse cast by The Evil Queen, where they have been robbed of their real memories. They all live blissfully ignorant to the fact that they’re powerful, magical people. That is, until former resident Emma Swan comes to town. Her arrival triggers the memories of various townspeople, one of whom is Storybrooke’s wealthiest resident and, arguably, its greatest villain: Mr. Gold, A.K.A. Rumplestiltskin (Robert Carlyle). 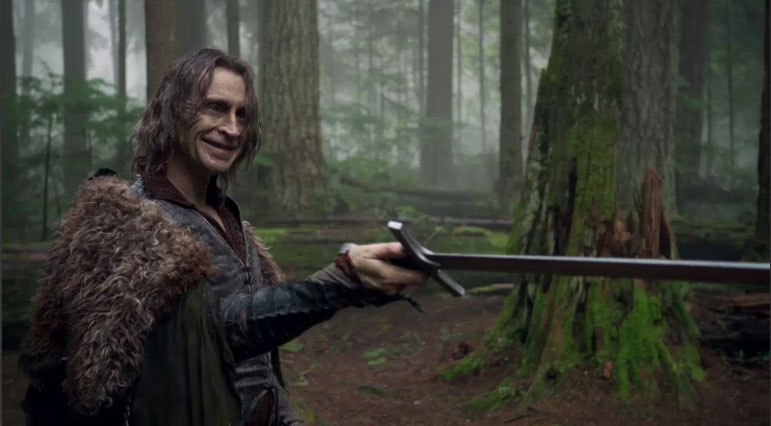 Robert Carlyle as Rumplestiltskin in Once Upon A Time

Rumplestiltskin’s villainy becomes pronounced once he is overtaken by dark magic. Throughout his mortal life, he wished for the power to protect and provide for his family. When he finally finds power, however, it is through sinister means. The Darkness—an evil magical entity—takes hold of Rumplestiltskin, thus turning him into The Dark One, the most powerful practitioner of dark magic. The good guy with his family’s interest at heart is quickly overtaken by darkness. Rumplestiltskin becomes consumed by his addiction to power. Because of the Darkness’ firm hold on Rumplestiltskin, he is the show’s ultimate villain. Or is he? Rumplestiltskin’s relationship to good and evil isn’t black and white, complicating his status as an outright villain. Though Rumplestiltskin can be conniving and selfish, he also exhibits some underlying benevolence. As such, Rumplestiltskin proves that everyone in Storybrooke has the capacity for good and evil.

Rumplestiltskin is primarily characterized as a mischievous imp, fixated on making devilish deals with residents of the Enchanted Forest. If someone doesn’t give Rumplestiltskin what he needs or stands in his way, he kills them. Although The Dark One may have adopted some murderous tendencies, he commits them in the name of redemption. He wants to find his son Baelfire to apologize for letting his lust for power control his decisions. 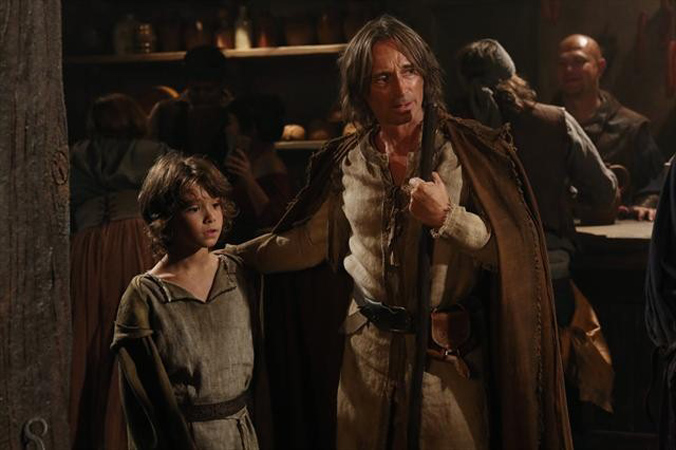 Dylan Schmid as Young Baelfire and Robert Carlyle as Rumplestiltskin

Even Mr. Gold, Rumplestiltskin’s Storybrooke alter ego, proves to act from a position of mischief and selfishness. He is the town’s wealthiest resident and runs a pawnshop full of magical objects. Like his doppelganger in the Enchanted Forest, Mr. Gold strikes deals with town residents in exchange for things that he wants. He helps Emma, the show’s protagonist, to break the curse that brought them from the Enchanted Forest to Storybrooke. Helping her, however, is not a gesture of goodwill; it is purely a selfish act because breaking the curse will bring back magic to Storybrooke and therefore restore his magical powers.

In Season 3, Storybrooke’s central characters travel to Neverland, where we see Rumplestiltskin begin to turn over a new leaf. Neverland is also where they find Baelfire. This meeting marks a turning point for Rumplestiltskin as he battles with his own conscience. Baelfire is the light that keeps Rumplestiltskin human at his core. To prove himself to his son, Rumplestiltskin sacrifices himself to save the town from the villainous Peter Pan. In “Going Home,” he says, “I’m a villain and villains don’t get happy endings,” as he pays the price to keep his loved ones safe. This sacrifice, however noble, had Rumplestiltskin’s own interest at heart. His “gallant” death is not the last we see of him. 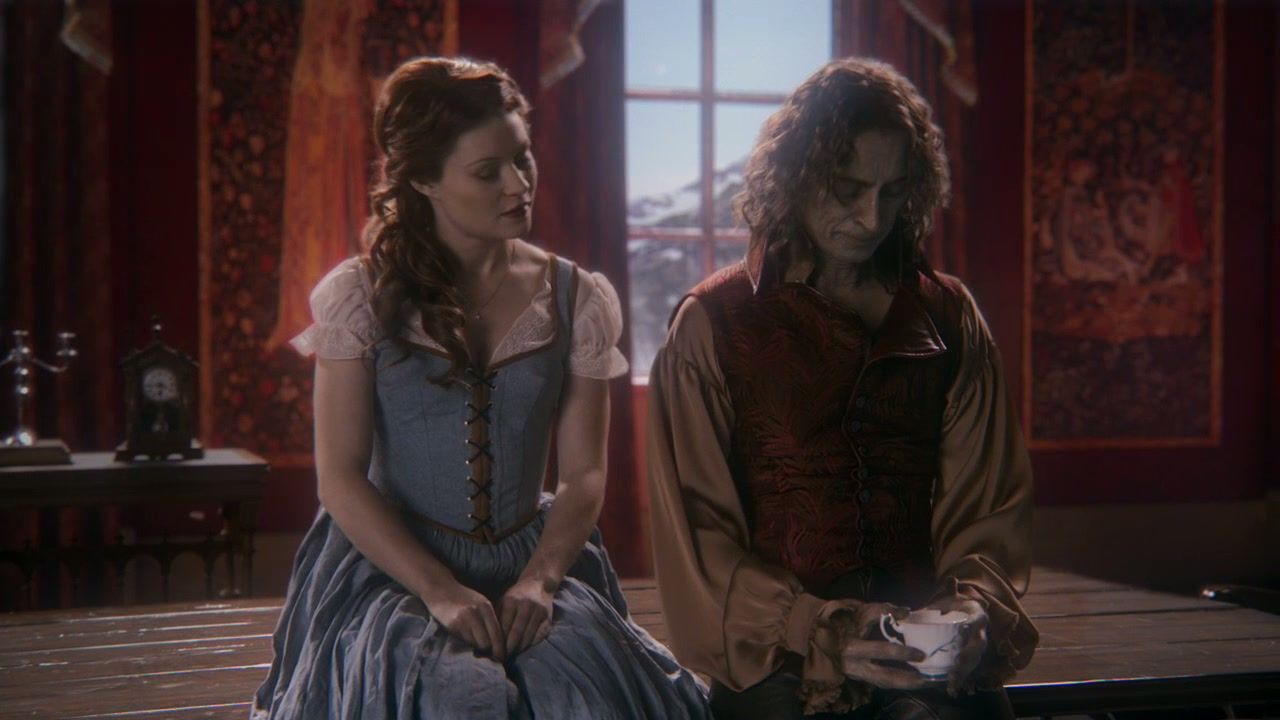 Emilie de Ravin as Belle and Robert Carlyle as Rumplestiltskin

Rumplestiltskin’s conflicted morals also affect his love life. It is his self-interested dealings that bring him to Belle, his second wife. In this particular deal, Belle becomes Rumplestiltskin’s caretaker in exchange for the assurance of her family’s safety during the Ogre War. In true Beauty and the Beast fashion, they fall in love. Rumple, as she calls him, tries his best to be a better man for her but ultimately fails. He is haunted by the fact that his first wife, Milah, left him and is convinced that no one could love him without power. Even with all the dark magic in the world, Rumplestiltskin is still overwhelmed by cowardice; he’s unable to be the strong, courageous man he so desperately wants to be.

All of Once Upon a Time’s characters have been faced with decisions between good and evil. Separating the main characters into true heroes and villains is therefore a superfluous task; everyone has a little light and a little dark in them. That’s what makes the show so compelling. In the episode “Her Handsome Hero,” Rumplestiltskin says, “That’s the thing about dark and light – it depends on your point of view.” One thing is for sure; Rumplestiltskin’s point of view might always be selfish, but it’s far from malicious.